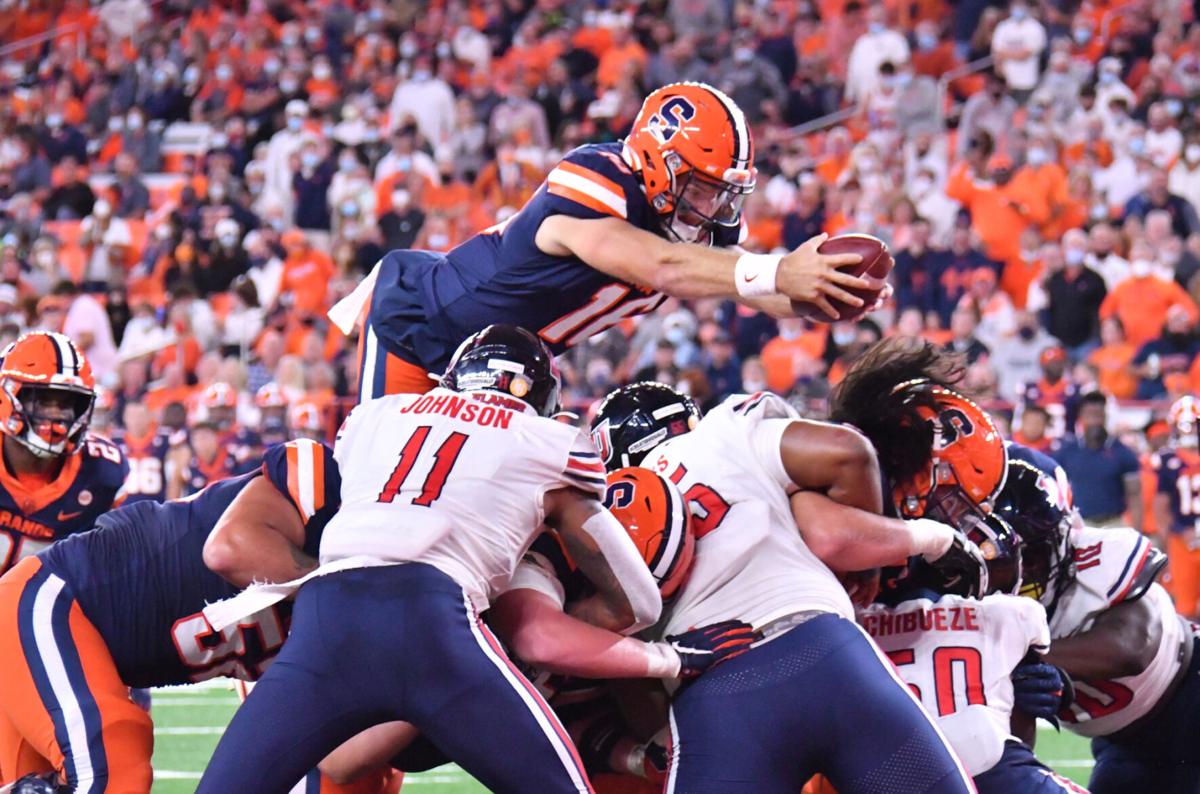 Syracuse quarterback Garrett Shrader leaps over the line of scrimmage to score a touchdown against Liberty in Friday’s game at the Carrier Dome. Mark Konezny/USA TODAY Sports 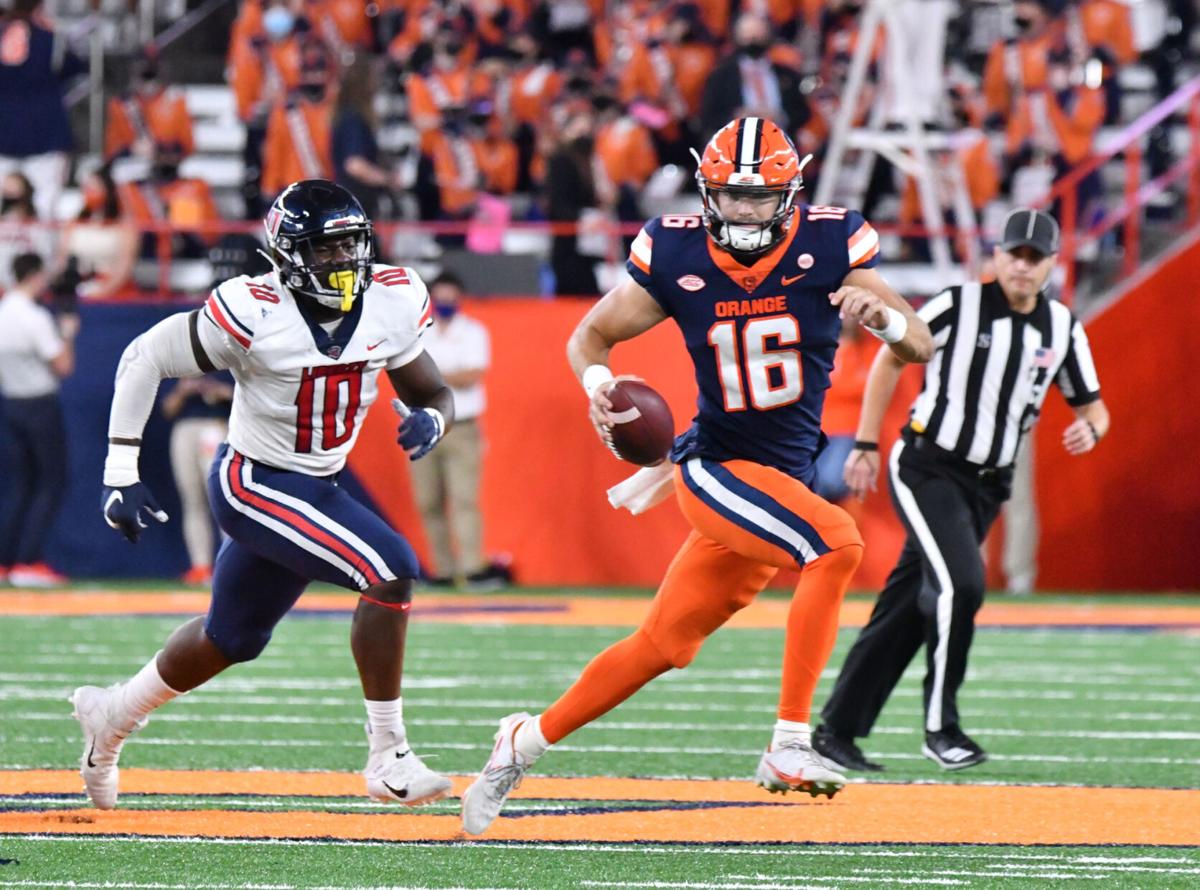 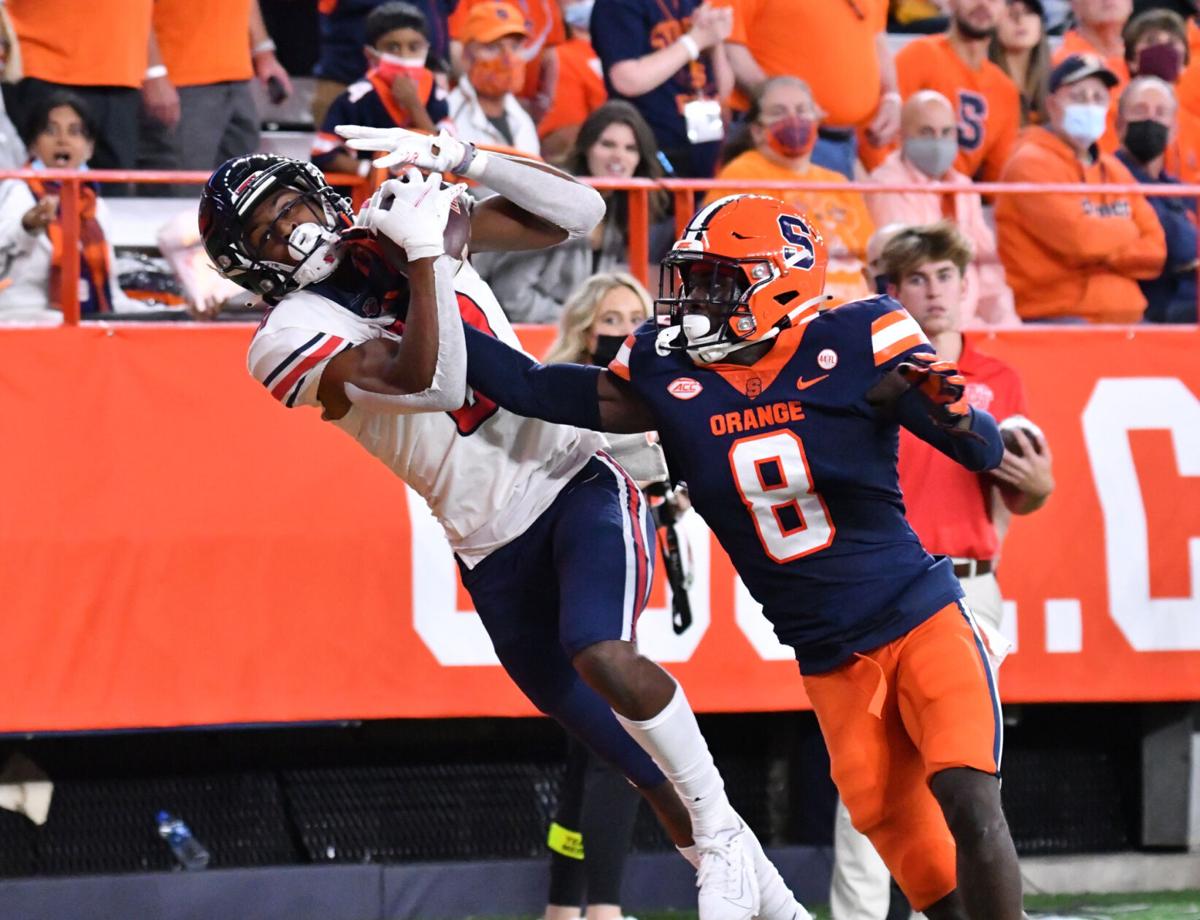 Syracuse quarterback Garrett Shrader leaps over the line of scrimmage to score a touchdown against Liberty in Friday’s game at the Carrier Dome. Mark Konezny/USA TODAY Sports

SYRACUSE — Sean Tucker stole the spotlight for the second straight week to lift the Syracuse University football team to another win at the Carrier Dome.

Tucker ran for 168 yards and a touchdown on 31 carries and the Orange defense limited star quarterback Malik Willis just enough to come away with the thrilling 24-21 victory over the FBS independent Liberty Flames in front of 29,942 fans on Friday night.

Andre Szmyt connected on 35-yard field goal as time expired to secure the victory in Garrett Shrader’s first start at quarterback for SU, which closed its nonconference slate at 3-1 overall.

Szmyt’s game-winning kick was set up by a timely takeaway from the SU defense, halting a second-half comeback bid by Willis and the Flames (3-1).

Cody Roscoe and Marlowe Wax each hit Willis just as he was getting set to pass, knocking the ball loose for a fumble recovered by linebacker Mikel Jones that set SU up at the Liberty 30-yard line with three minutes and 35 seconds left. SU held the ball the rest of the way until Szmyt nailed his first career game-winner.

“It wasn’t really pretty in the pass game, but Sean Tucker did a great job, offensive line did a great job, and I’m glad we got the win,” Shrader said afterward. “There is a lot to clean up, I know that right now, and we’ll go ahead and learn from this.”

Tucker scored on a 27-yard TD run and added two catches for 27 yards one week after scoring five TDs in the Dome for the second highest total in team history behind only Jim Brown in 1956.

Shrader went 6-for-15 for 77 pass yards and added 51 rushing yards on 15 carries while getting his first start over Tommy DeVito under center.

The Mississippi State transfer added a pair of rushing touchdowns for the Orange, getting the scoring started with a one-yard plunge in the second quarter and scoring on a 10-yard rush to extend SU’s edge to 21-7 early in the third.

Syracuse coach Dino Babers said that he notified both quarterbacks of his starting decision earlier in the day Friday at the team hotel before informing the rest of the team.

DeVito started the first three games, and the pair has been battling for the spot since the start of SU training camp. Babers said that Shrader will start the next game after leading SU to the victory.

“I told those guys all the rules, all the bells and whistles and all that stuff is off,” Babers said. “I’ve got to do things that is going to allow us to win football games, and the team that we were playing this week, we really felt that there were certain things that we could take advantage of with Garrett Shrader’s legs. Garrett will start (next) because we won the game, but we need everyone in our locker room to go through this schedule.”

Willis completed 14 of 19 passes for 205 yards and three touchdowns, adding 49 yards on 17 attempts on the ground. The first-round NFL draft prospect had thrown TDs on back-to-back possessions to rally from 14-point deficit and tie the game at 21-21 midway through the third quarter.

He was stopped on two straight runs at the goal line by the SU defense to force a turnover on downs with the game tied at 21 apiece with eight minutes left. Jones made the tackle to stop him short on fourth down for the key defensive stand.

“We just dug to our roots (for that stop),” Jones said. “We know what type of defense we are, we knew we shouldn’t have let them get that far and when we saw them going for it on fourth down, we couldn’t let them in.”

Roscoe and Marlowe Wax each sacked Willis twice and Jones finished with eight tackles and a sack to lead the SU defense.