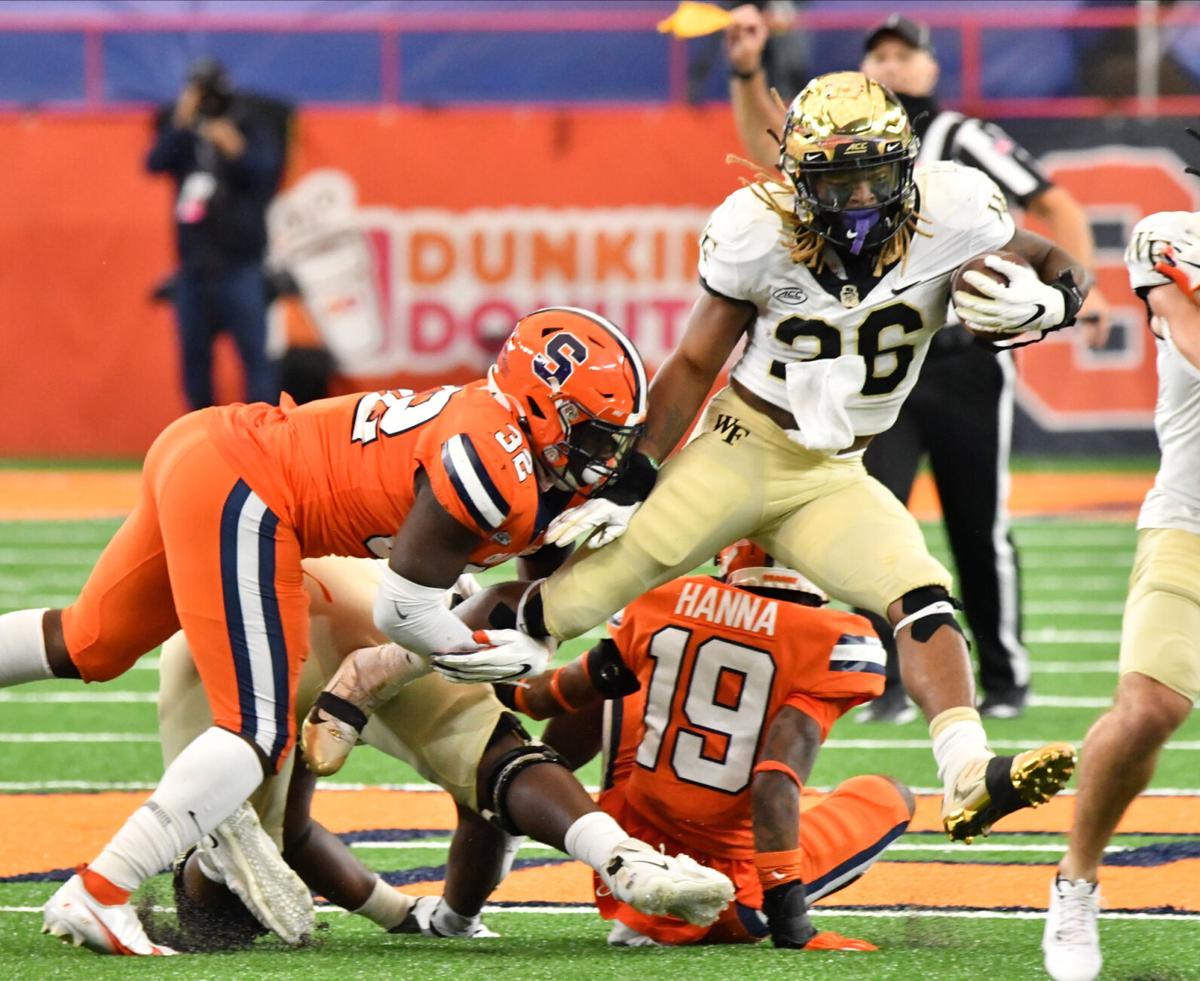 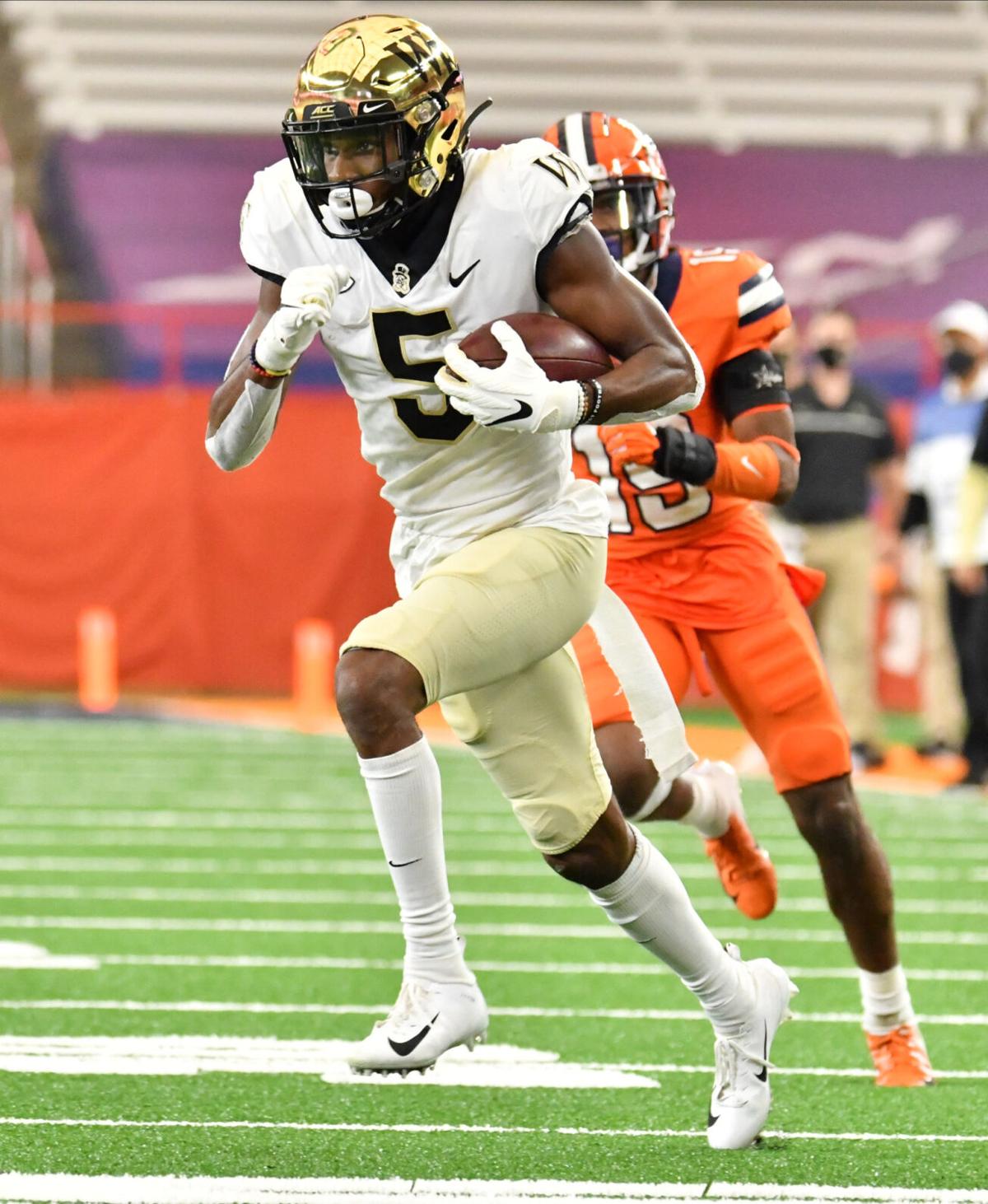 Wake Forest wide receiver Jaquarii Roberson runs for a touchdown after catching a pass in the third quarter against Syracuse on Saturday at the Carrier Dome. Mark Konezny/USA TODAY Sports 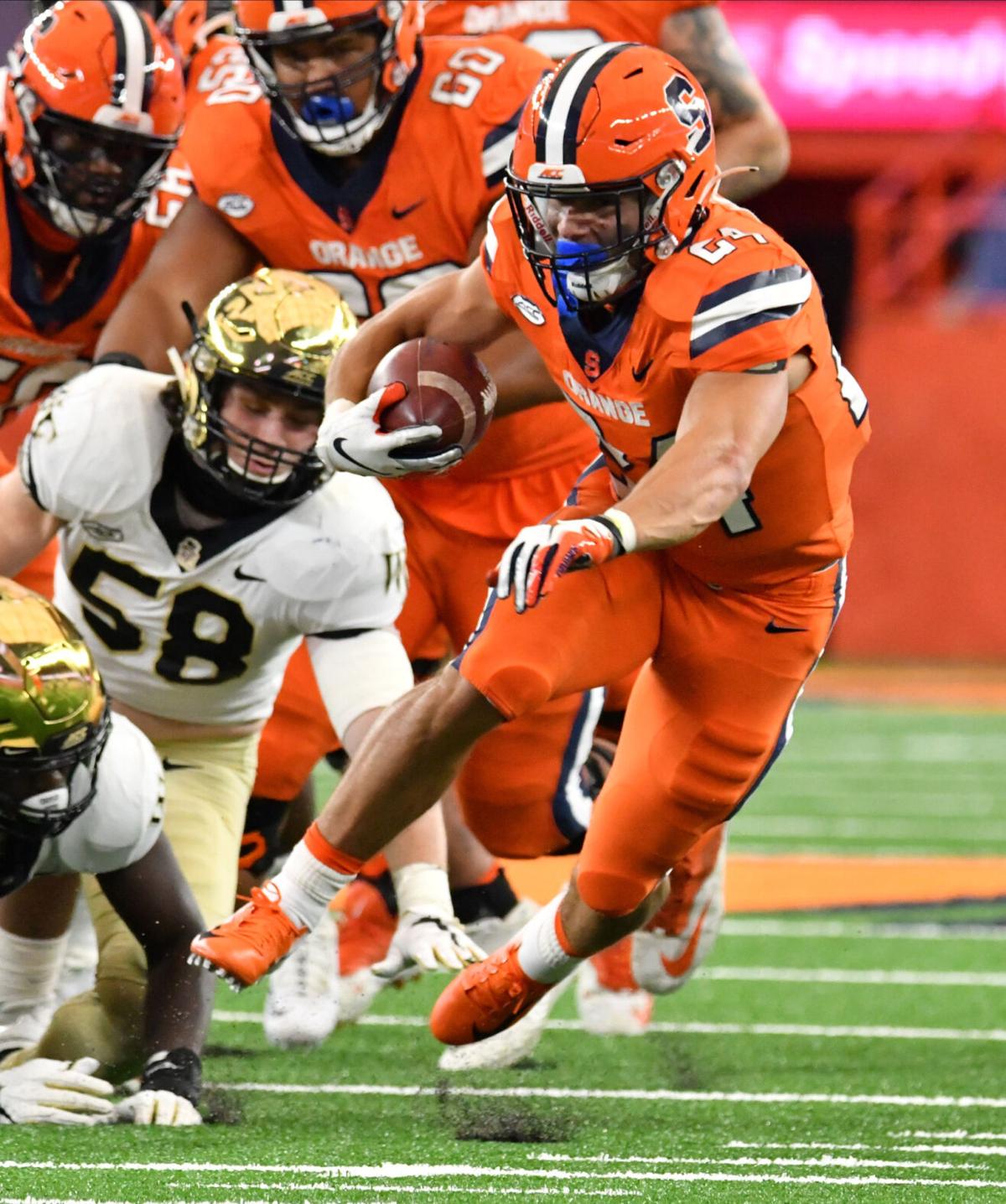 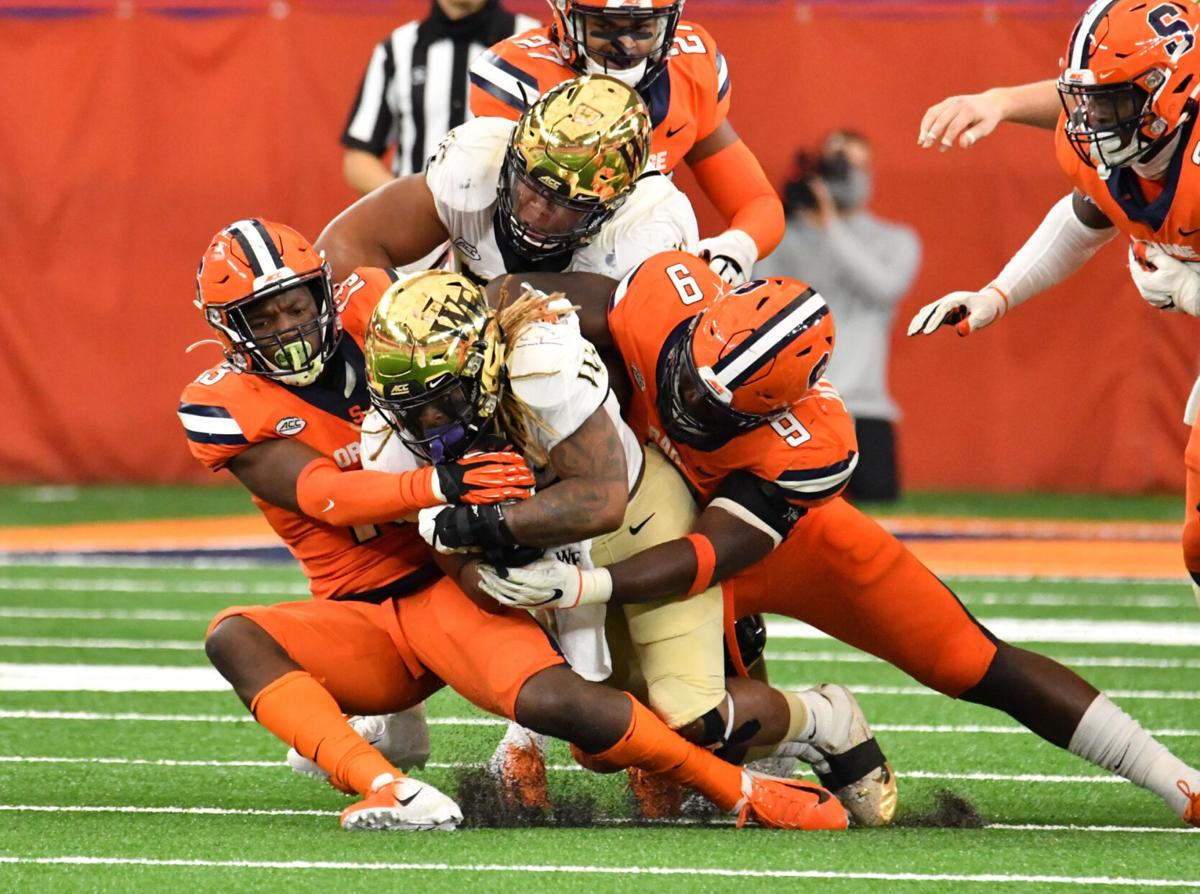 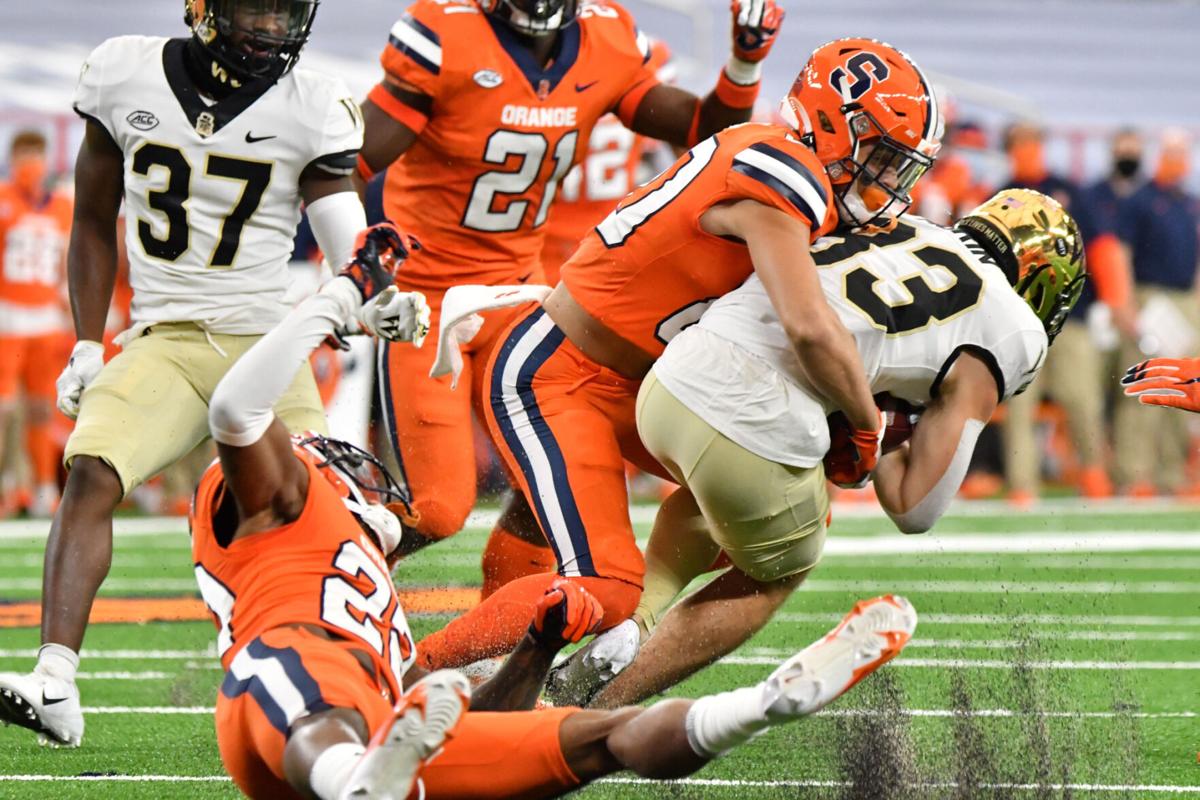 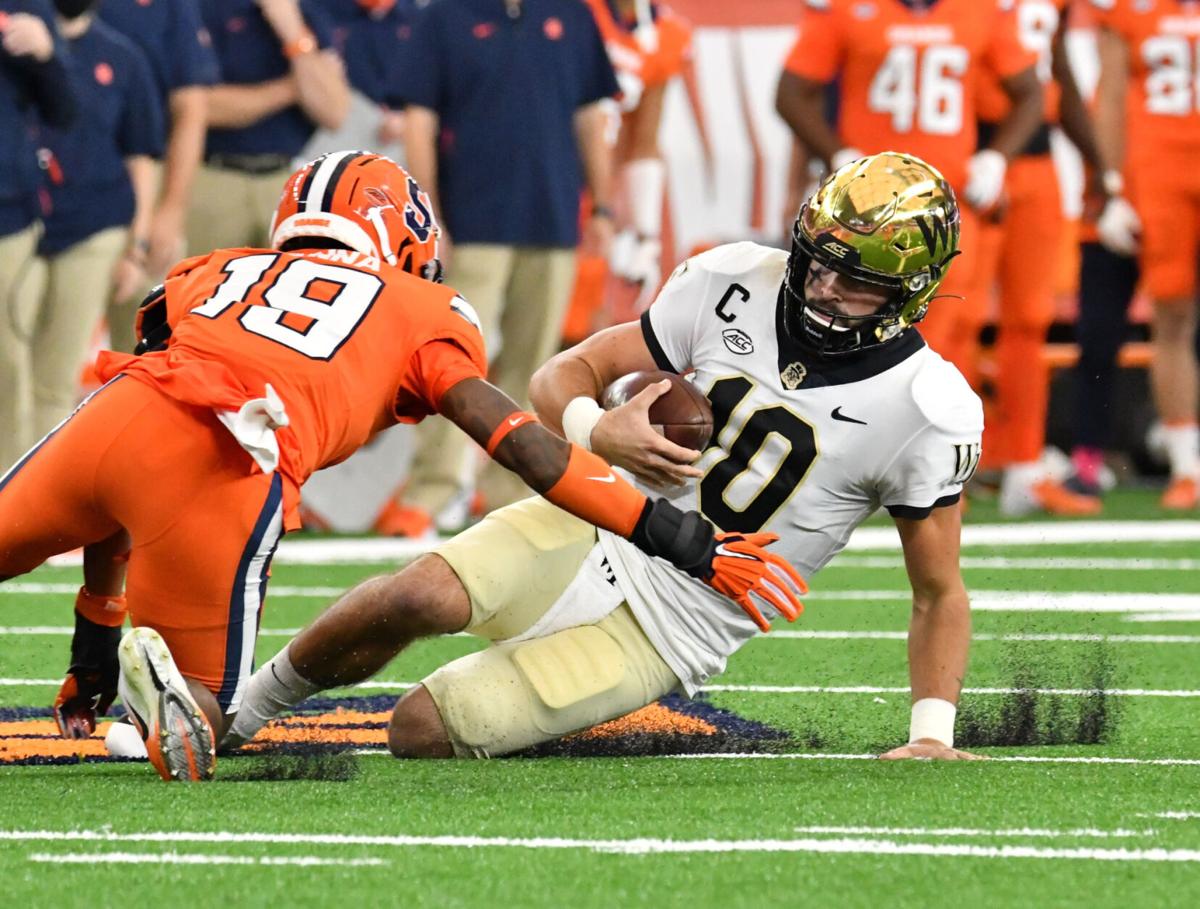 Wake Forest quarterback Sam Hartman slides for a first down in front of Syracuse’s Rob Hanna on Saturday at the Carrier Dome. Mark Konezny/USA TODAY Sports 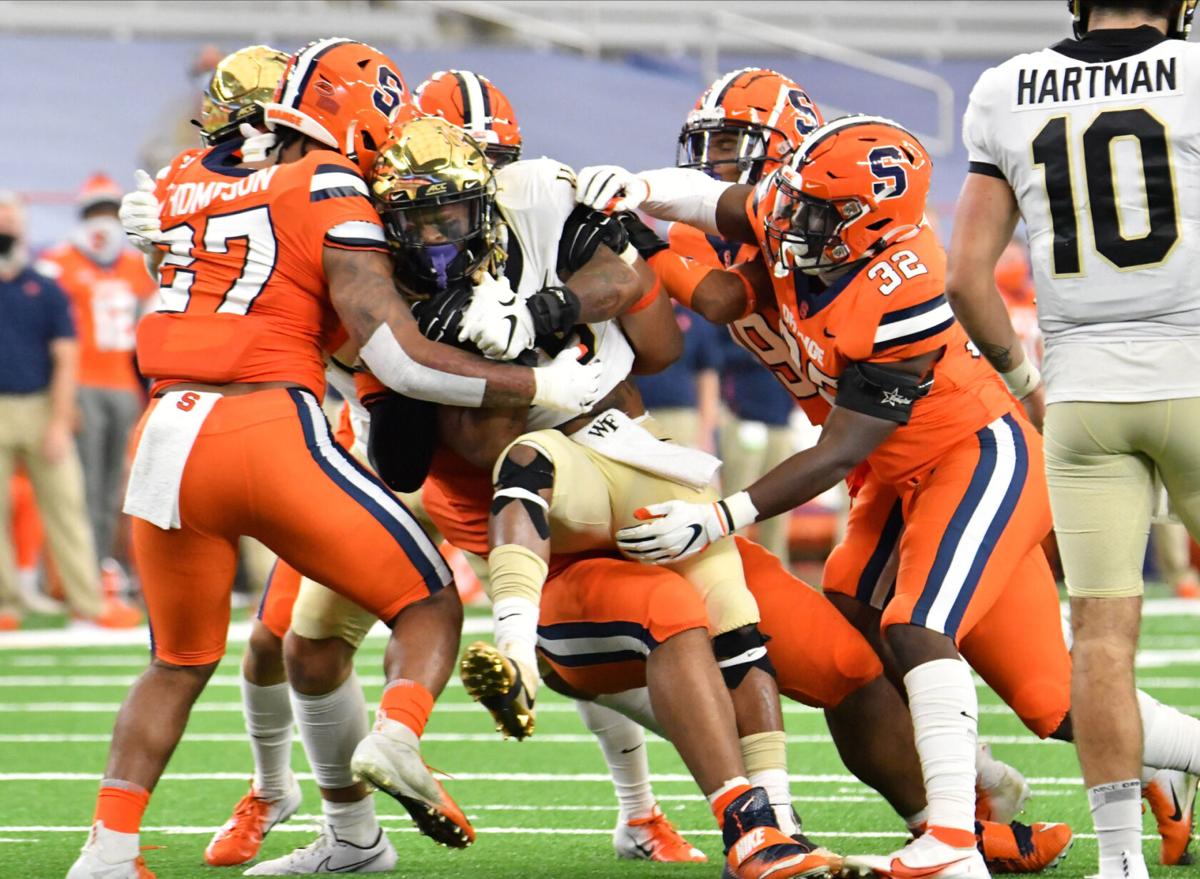 Wake Forest wide receiver Jaquarii Roberson runs for a touchdown after catching a pass in the third quarter against Syracuse on Saturday at the Carrier Dome. Mark Konezny/USA TODAY Sports

Wake Forest quarterback Sam Hartman slides for a first down in front of Syracuse’s Rob Hanna on Saturday at the Carrier Dome. Mark Konezny/USA TODAY Sports

SYRACUSE — The Syracuse University football team could not combat the two-headed monster in the Wake Forest backfield and was unable to overcome a nightmare sequence early in the second half on Halloween in the Carrier Dome.

The game was played without fans due to state COVID-19 restrictions, which have yet to allow SU to permit spectators through its first four home games.

“We’re sitting at 1-6 with four games left and we’re going to continue to make evaluations on this football team and try to not only win football games, but continue to find out who’s the best guys on the team so that we’re doing things the right way down the stretch,” SU coach Dino Babers said.

The already short-handed Orange played without leading rusher, freshman Sean Tucker, and star junior defensive back, Trill Williams, en route to its fourth straight setback, all by 14 points or more.

The Demon Deacons (4-2, 3-2) scored 28 unanswered points to pull away, highlighted by a two-play turnaround early in the third quarter.

Wake Forest quarterback Sam Hartman found slot receiver Jaquarii Roberson for an 80-yard touchdown to extend the team’s lead to 24-7. On the first play of the ensuing drive, Syracuse redshirt senior quarterback Rex Culpepper threw an interception to Gavin Holmes that was returned 32 yards for a touchdown, pushing the WFU advantage to 31-7 less than three minutes into the second half.

Walker III scored on a 20-yard run with 1:19 left in the second quarter to start the scoring surge, and finished it with a five-yard plunge to give the Demon Deacons a 38-7 edge with 3:09 left in the third.

“When you come out and you don’t execute and the momentum shifts in the other team’s favor, it’s kind of hard to come back from that,” said SU senior wide receiver Nykeim Johnson. “We just got to make sure we go back, lock in, watch the film and see where we had all our problems at, and make sure we grow week to week.”

Walker III and Beal-Smith became the latest opposing running backs to haunt the SU defense. Beal-Smith ran for a game-high 87 yards on 19 carries, while Walker III added 79 yards on 16 attempts, adding a one-yard score for three rushing touchdowns. The duo helped pace WFU to doubling SU in first downs, 26-13, and finishing with a 438-221 edge in total offense.

Syracuse entered ranked last in the ACC in rush defense, yielding an average of 235 yards on the ground, and Saturday marked the fourth time this season that multiple opposing rushers topped 75 yards.

Redshirt sophomore running back Cooper Lutz led SU with 106 yards of offense in his first career start filling in for Tucker. Lutz finished with 87 net rushing yards on 15 carries to go with four catches for 25 receiving yards.

SU’s Johnson hauled in a 21-yard touchdown reception from Culpepper to trim the early Wake Forest lead to 10-7 with 4:17 left in the second quarter. Johnson set up the short scoring drive with a 26-yard punt return into Wake Forest territory and added 22 rushing yards on a pair of carries.

The surprise absence of Williams loomed large on the other side with four freshmen starting in the SU secondary. Roberson took advantage with seven catches for 130 yards, including the game-changing touchdown catch. Entering the game, Roberson was the top-rated slot wide receiver by Pro Football Focus College while Williams had garnered the second-best slot coverage grade.

Babers said that he knew Tucker and Williams would both be out early this week but kept it quiet to not allow his opponent a practice advantage. He hopes each returns next game.

“Tucker was one of those guys where he maybe could have went, but I just got tired of seeing him come out of games, the kid is really giving us his all at a position where we’re really thin and he’s been saving the day, and I just felt we needed to hold him out and get him healthy again,” Babers said.

He added of Williams: “Trill really came down with some illnesses and he was banged up anyway, so with him not being able to practice, it just seemed like the right thing to do.”

Culpepper completed 15 of 27 passes for 85 yards and the touchdown while tossing two interceptions and losing a fumble. True freshman JaCobian Morgan replaced him on the final SU drive and completed all seven of his pass attempts for 57 yards, capped off by a three-yard TD pass to Luke Benson.

Hartman completed 19 of 33 pass attempts for 250 yards and has now thrown a WFU-record 189 straight passes without being intercepted. He helped the Demon Deacons finish with a 3-0 edge in turnover margin against the Orange, which entered with an FBS-best 17 takeaways.