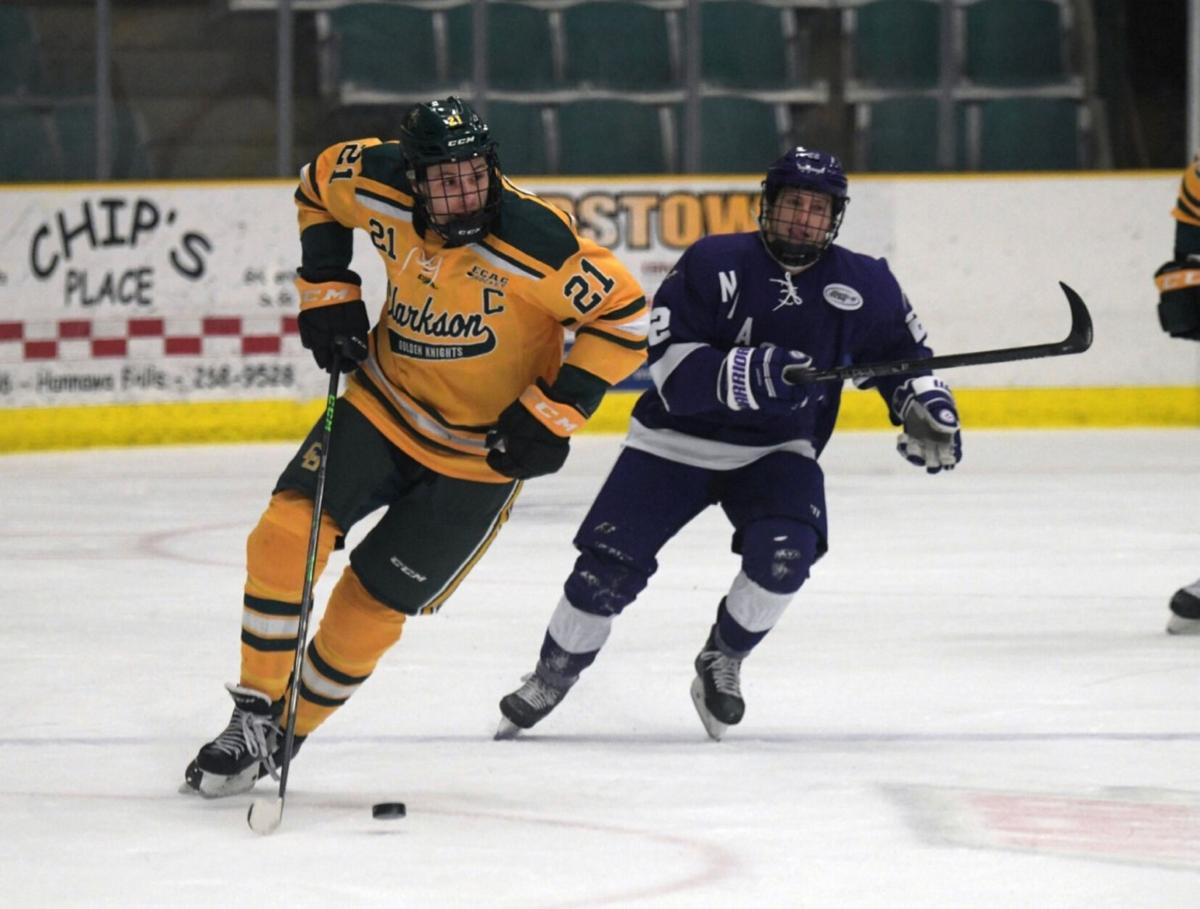 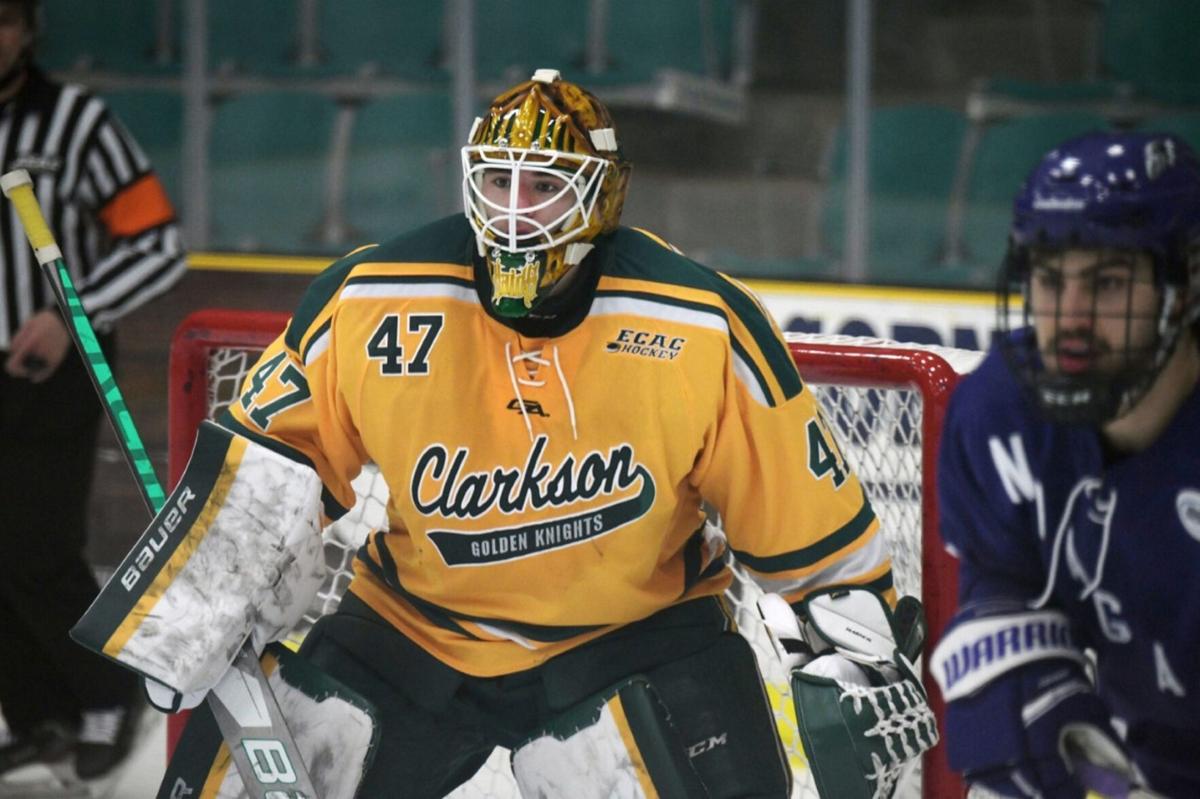 Clarkson University freshman goalie Ethan Haider looks on during a nonconference game against Niagara on Tuesday at Cheel Arena in Potsdam. Haider made 24 saves to post the win in his first home start for the Golden Knights. Clarkson University photo 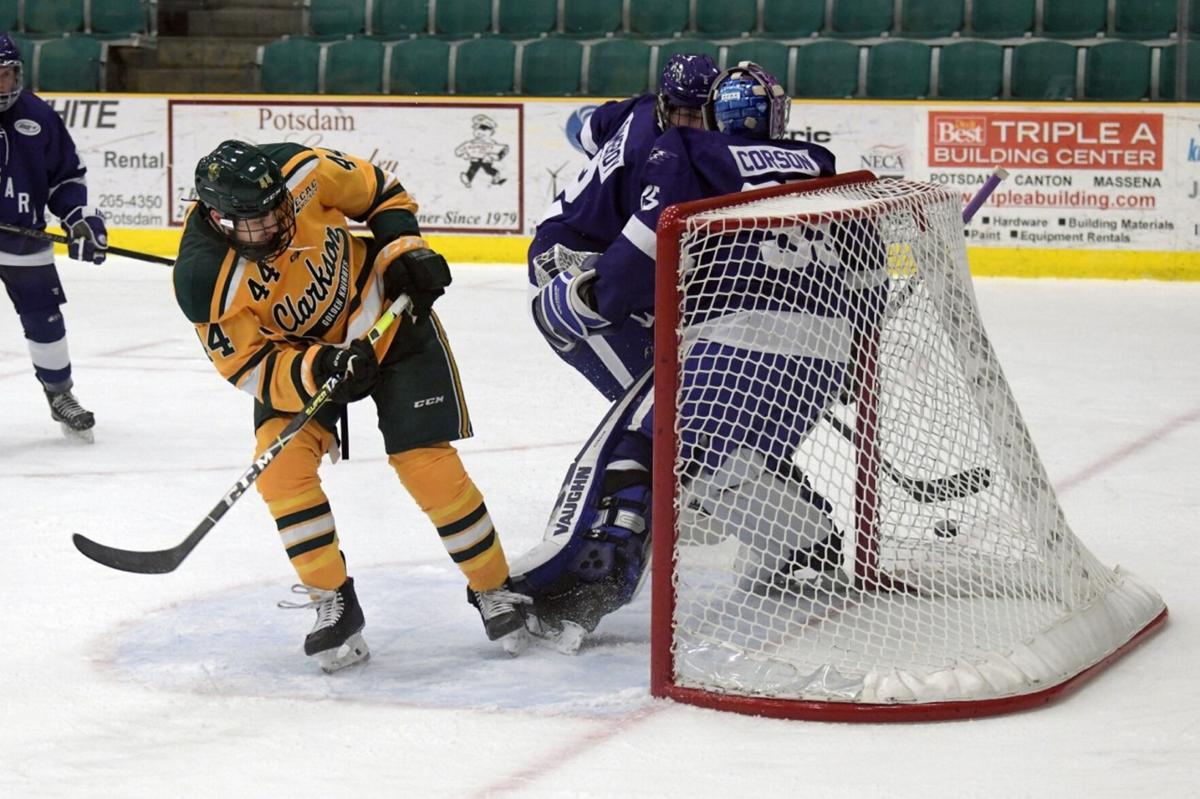 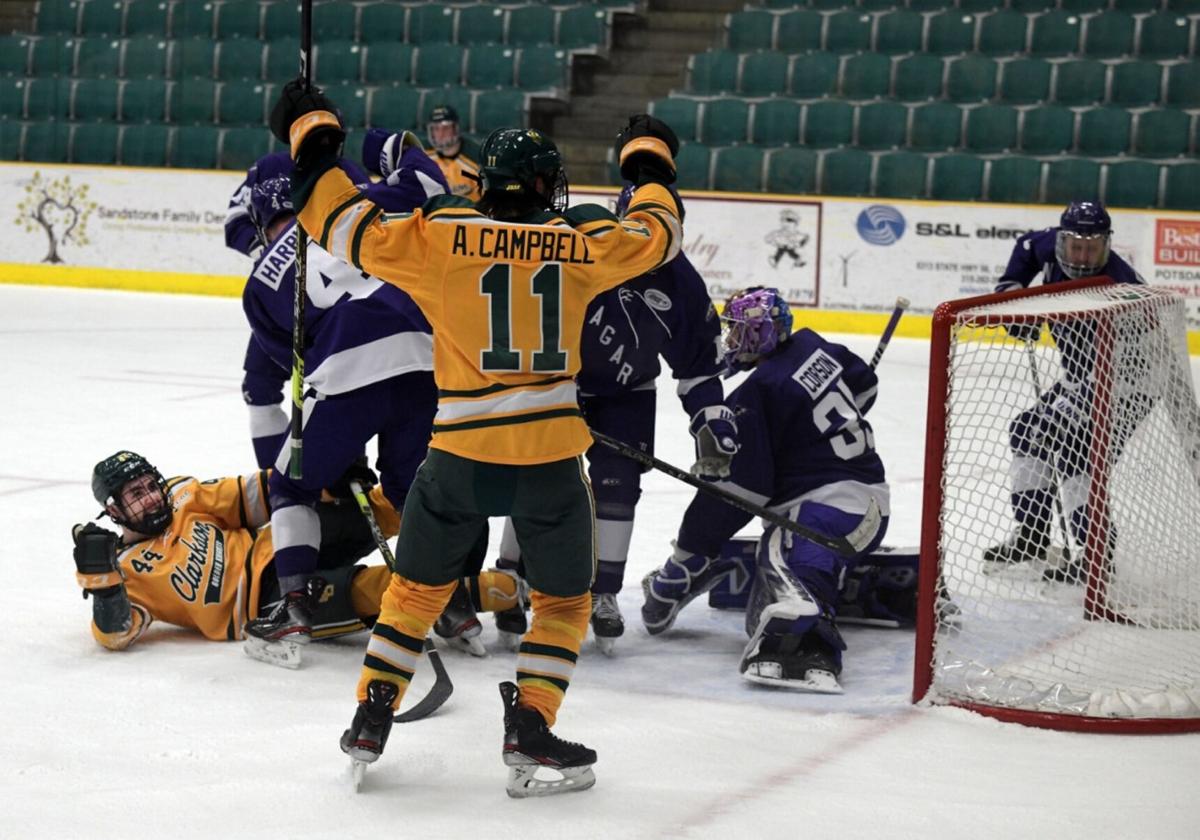 Clarkson University freshman goalie Ethan Haider looks on during a nonconference game against Niagara on Tuesday at Cheel Arena in Potsdam. Haider made 24 saves to post the win in his first home start for the Golden Knights. Clarkson University photo

The Clarkson University men’s hockey team’s last scheduled nonconference game of the season ended with a 6-3 win over Niagara and featured the return of Josh Dunne, the continued growth of Anthony Callin and an impressive debut for newcomer Nick Wicks.

Clarkson (5-3 overall) avenged a 4-1 loss at Niagara on Dec. 9 with Tuesday’s victory at Cheel Arena. The Golden Knights open the ECAC Hockey portion of the schedule at 5 p.m. Friday with a game at Colgate.

The Golden Knights had played the first seven games of the season without junior forward Josh Dunne, who was the team’s returning leading scorer after picking up 13 goals with 14 assists in 32 games last year. Dunne, who had been out with an undisclosed injury, had his minutes limited as part of the return process but finished with three shots.

“He’s a great college hockey player,” Clarkson coach Casey Jones said of Dunne. “You pop him in there, we are young in the back end, it’s like any sport, you want to be good in the middle of the ice. He’s a big presence in the middle of the ice. He extends my bench. We didn’t use him in all the power plays tonight, but he’s got a great net-front presence. I thought he had his legs underneath him. As the game wore on he got really good.”

Clarkson started quickly Tuesday with Anthony Romano attempting a breakaway shot just 47 seconds into the game, which was stopped by the pads of Purple Eagles goalie Mike Corson.

Romano wound up scoring the first goal for Clarkson at 13 minutes, 31 seconds of the first period on the rebound of a shot from Jordan Power. Power was all alone behind the circles when Jack Jacome found him with a pass. He took a shot that hit the post and Romano pounced on the rebound opportunity.

Niagara (1-4-2) tied the game with 0.1 left in the first period on a power-play goal from Jack Billings.

Clarkson took control of the game in the second period when Callin, a junior, scored two goals just 4:02 apart to extend the lead to 3-1.

Callin’s first goal came at 11:54 after he took a nice pass from Alex Campbell, who was below the goal line. His second goal came at 15:58 when he was alone in the crease and scored on a rebound of a shot from Dustyn McFaul.

“We played a bit better,” Callin said as Clarkson was coming off a 5-4 overtime loss to Colgate. “I think we had a couple slipups, but that was a good 60 minutes of hockey for the team. The first goal, a couple lines before us were rolling, and Alex made a nice pass. The second one, Dustyn just put it to the net. It was nice to get those goals.”

Callin has scored five goals with three assists in the first eight games of the season. He has already matched his eight points (4 goals-4 assists) from last season and he has nearly scored as many goals (six) as he did as a freshman.

“It’s been a steady progress,” Jones said of Callin. “I thought his first year, coming in, he adjusted, we put him in some stuff. He started to figure things out and last year he took a step, in terms of his poise with the puck. He had a great summer. He was one of the guys during this whole (COVID-19) thing, who found a way to get better. His poise as a junior is tremendous. We’re real excited with where he’s going.”

Zach Tsekos extended Clarkson’s lead to 4-1 when he scored on a shorthanded breakaway at 14:43 of the third period.

Niagara, which is coached by former Clarkson assistant Jason Lammers, cut the lead to 4-2 at 17:20 with a goal from Ryan Cox.

Clarkson answered with two goals 13 seconds apart to extend the lead to 6-2.

Freshman forward Luke Mobley scored his first career goal at 19:05, one-timing a pass from Grant Cooper, and Alaska-Anchorage transfer Nick Wicks scored on a shot from the circle at 19:18. Tuesday was Wicks’s first game with Clarkson after joining the team last weekend.

“He was one of the playmakers on the Anchorage team as a freshman,” Jones said. “He projects for us to be really good at winning faceoffs. He can make tight-area plays and he’s elusive with his skating.”

Niagara ended the scoring with a goal from Carter Randklev at 19:52.