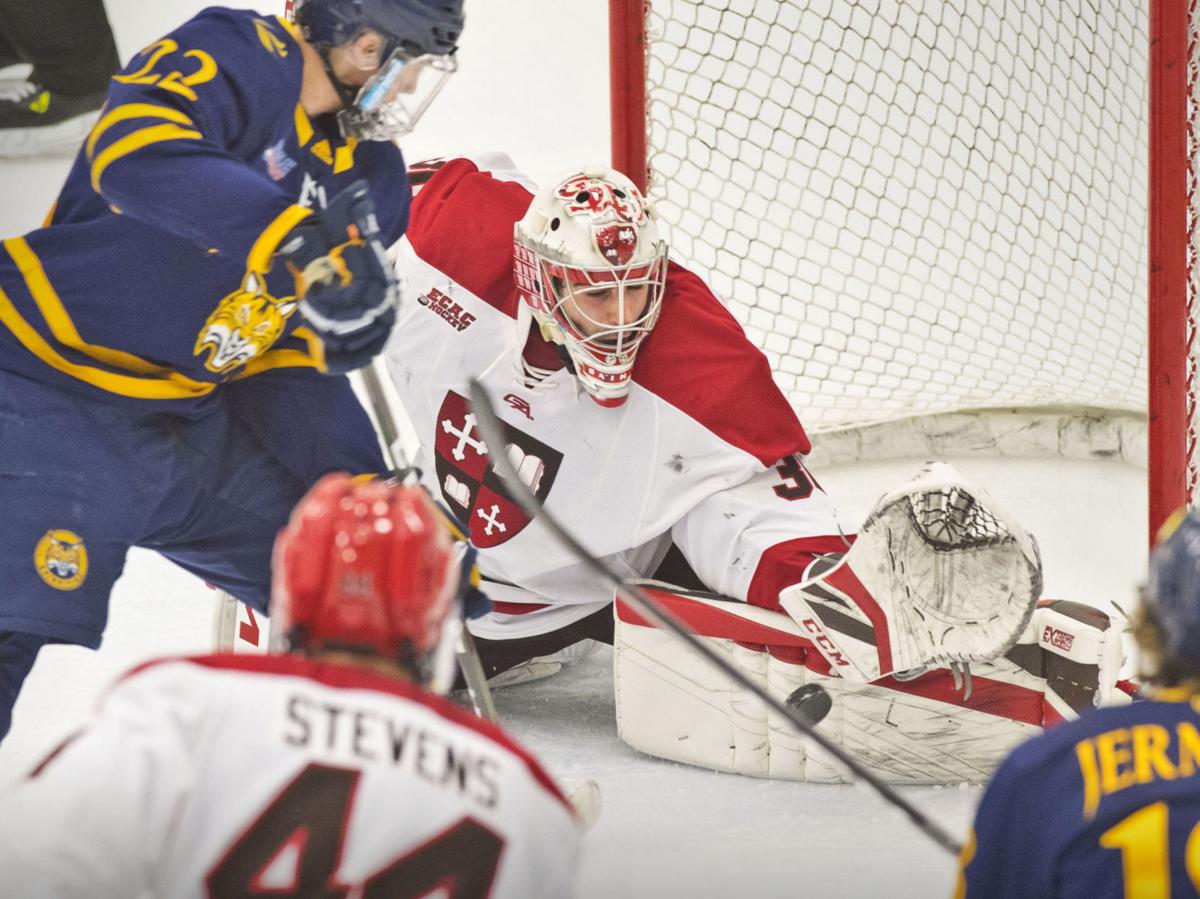 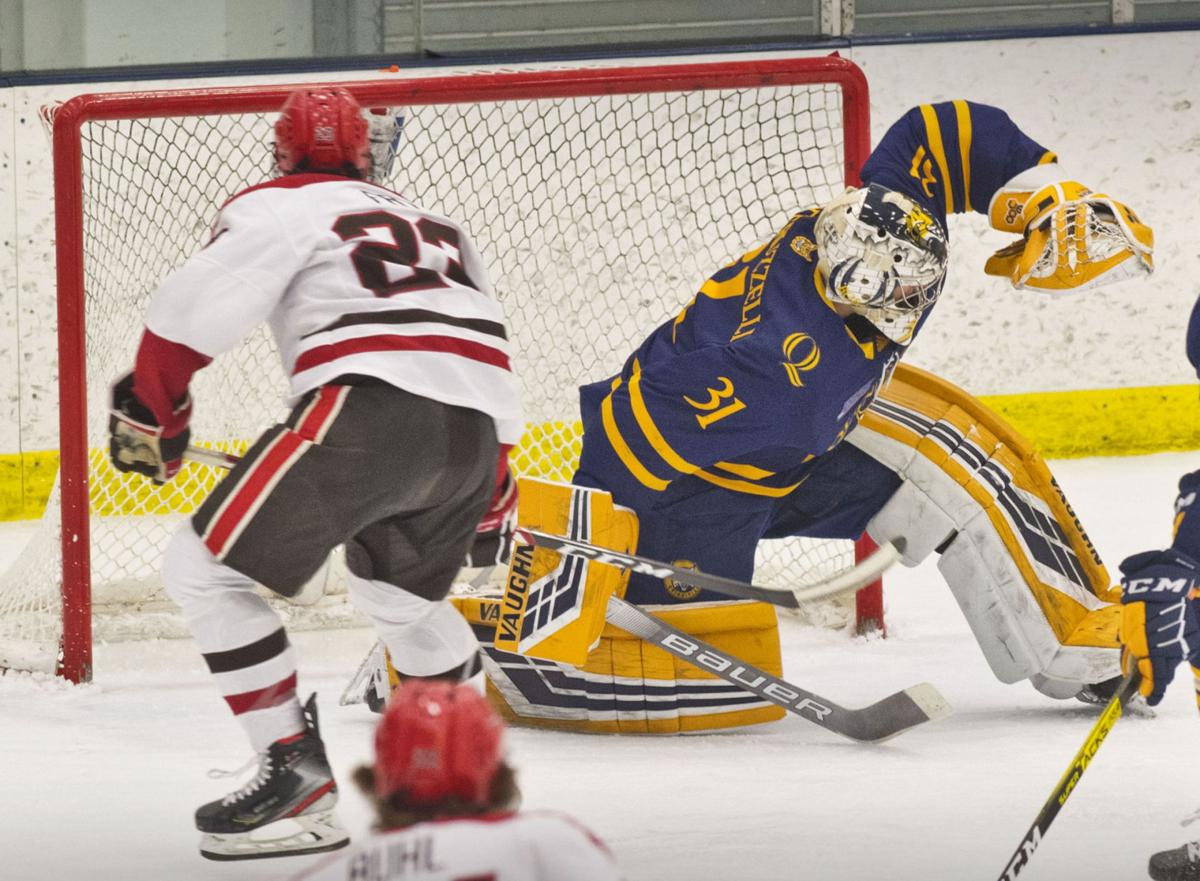 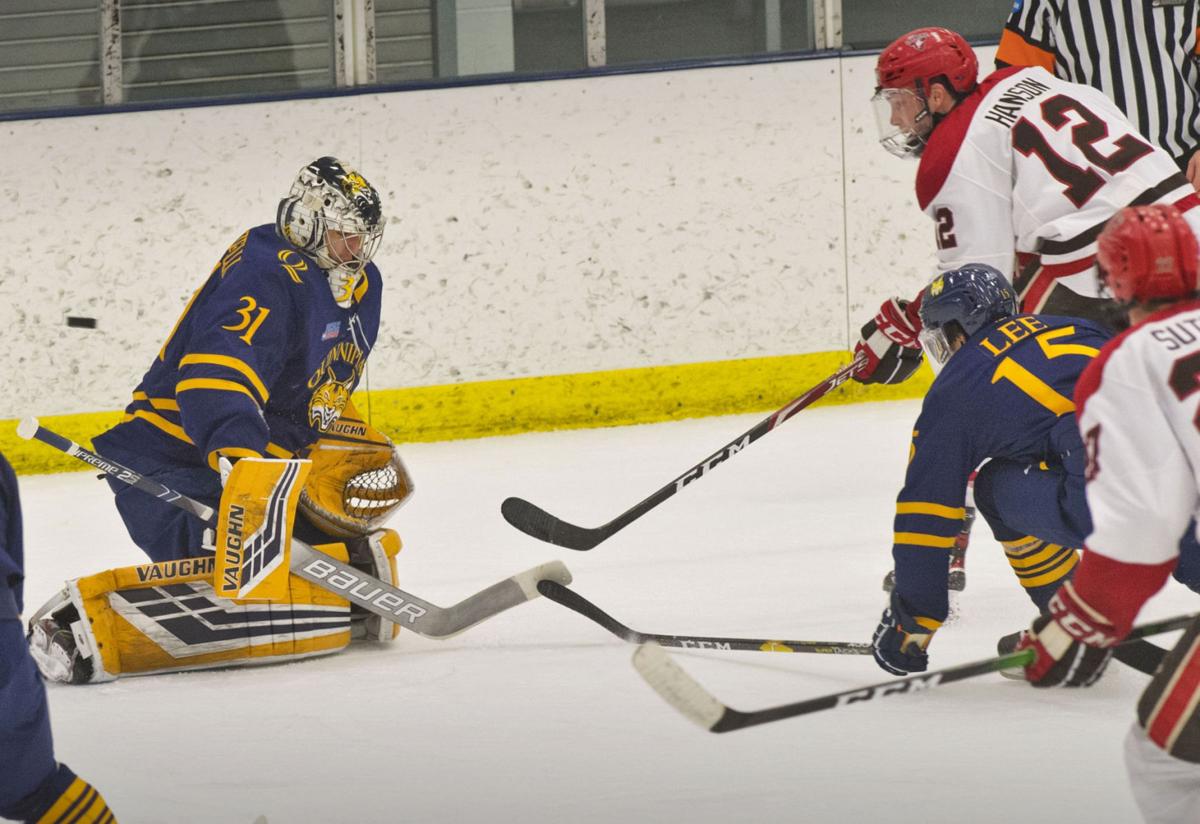 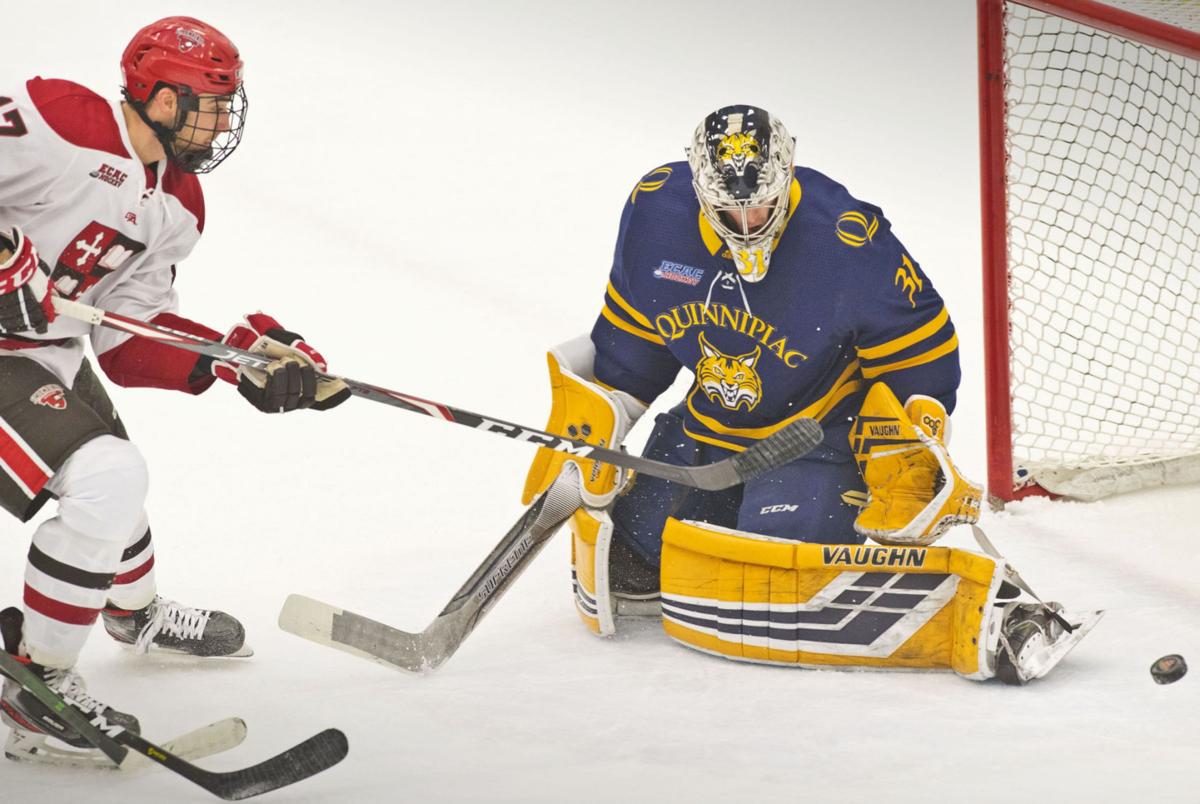 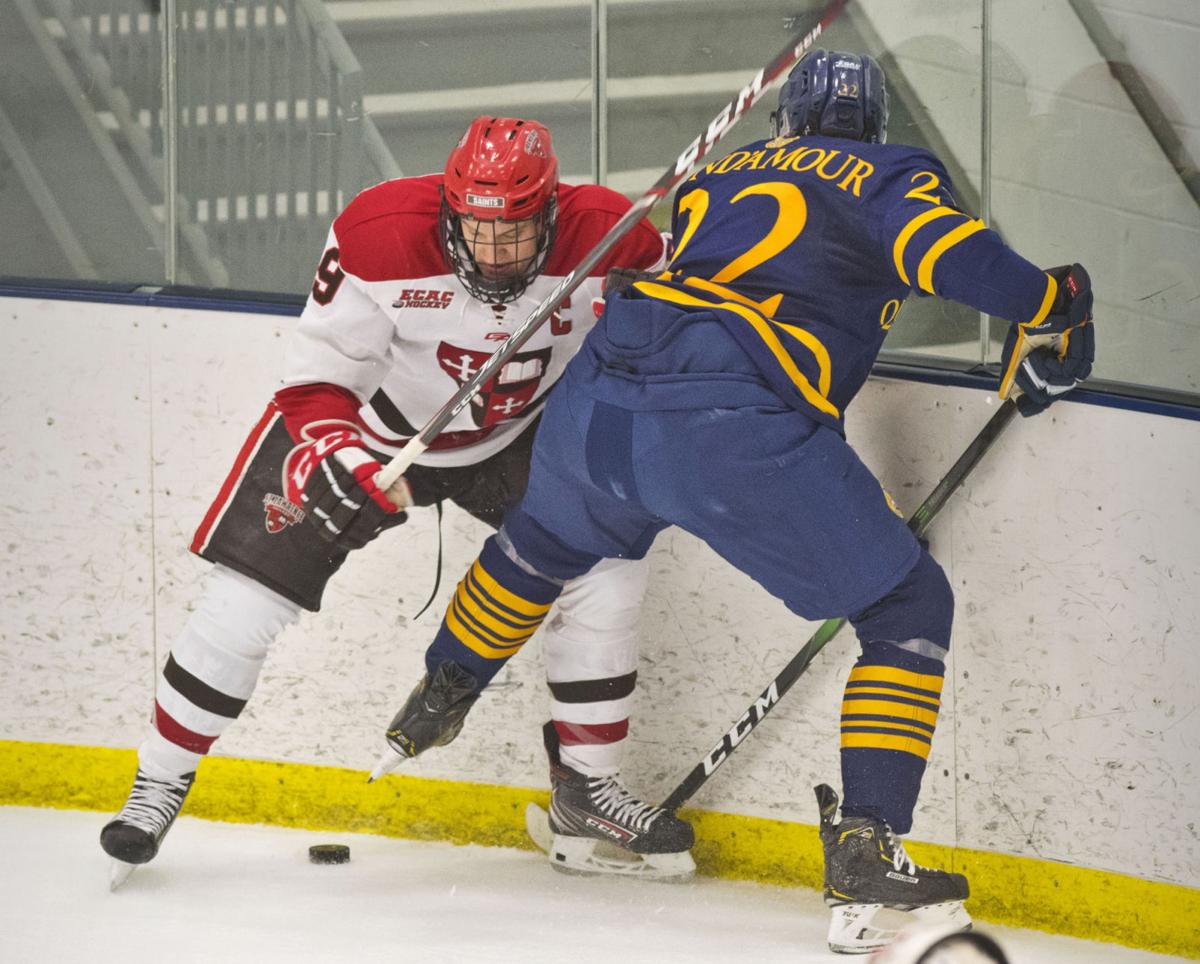 St. Lawrence’s Ryan Peltonen battles for the puck along the boards with Quinnipiac’s Skyler Brind’Amour during the second period. Christopher Lenney/Watertown Daily Times

St. Lawrence’s Ryan Peltonen battles for the puck along the boards with Quinnipiac’s Skyler Brind’Amour during the second period. Christopher Lenney/Watertown Daily Times

CANTON — There were things to like in St. Lawrence University’s 3-2 loss to Quinnipiac in a men’s ECAC Hockey game Friday night at SUNY Canton.

But what stuck with SLU head coach Brent Brekke most are some of the things that saw the Saints (3-16-3 overall, 1-9-0 conference) fail to hold a 2-1 lead in the second period and extend their current winless streak (0-10-2) to 12 games.

“I liked the fact that we stayed above the puck for the majority of the game, but in the second period we turned a bunch of pucks over,” Brekke said. “Exiting our zone we gave a lot of opportunities with clear possession. We didn’t execute that. We did those things in the first and did those things in the third and had success. When you have full possession you’ve got to secure the puck and you have to make strong plays. That’s awareness with it and communication away from the puck and supporting it. That 20 minutes was costly.”

Quinnipiac (12-7-1, 7-3-1), which won its seventh straight meeting against the Saints and sixth straight game this season, took a 1-0 lead at 7 minutes, 19 seconds of the second period on a power-play goal from Alex Whelan.

The Saints, who fell to 0-8-1 at SUNY Canton, responded to Quinnipiac’s goal by scoring two times in 58 seconds to take a 2-1 lead.

“If you want become a good team you’ve got to manage those things,” Brekke said. “That’s what good teams do. We tell our guys the teams that are best in the country, when they get one, they get two quickly. That’s the sign of a good team. You have to make sure if you get one you’ve got to keep momentum and push a little harder. You have to find a way to stem the tide a little bit and get back.”

Ashton Fry started the rally for the Saints with his first career goal at 9:22 of the second period, with Cameron Buhl and Dylan Woolf assisting.

Defenseman Bo Hanson gave SLU the lead with a goal with passes from Philip Alftberg and goalie Daniel Mannella. He skated the length of the ice to score a breakaway goal during a Saints power play.

“We’re starting to gain more (offensive) zone time, playing solid defensively, we’ve just got to clean up those little areas of the game,” Hanson said. “It’s a great thing for the team. We struggled early in the season offensively, it’s nice to see us get a couple goals there. I’m just lucky it went in.”

Quinnipiac entered Friday’s game having scored on 25.7 percent of its power plays. The Bobcats got a chance to start a comeback when SLU was called for having too many players on the ice at 14:52 of the second period.

“I thought St. Lawrence was really good,” Bobcats coach Rand Pecknold said. “I thought coach Brekke and his staff did a great job of getting their team ready and Mannella made a lot of saves early.

“They were resilient and they hung in there. I liked how we battled in the second (period). We were kind of controlling the game and we are down 2-1 and our guys didn’t quit and came back and found a way to get the win.”

Whelan tied the game for the Bobcats with his second power-play goal of the game at 15:11 of the second period.

“It’s a set play we have, I was trying to look back door and just kind of got lucky there, it went off someone’s stick and went in,” Whelan said. “When you are throwing pucks to the net, sometimes that happens. I think we always feel confident (on power plays). We were fortunate enough to put a couple in on the power play.”

Quinnipiac’s winning goal came from Zach Metsa at 17:27 of the second period on a shot that hit Mannella’s glove but trickled in.

“It hit eight different things on its way to the net and just kind of trickled in,” Metsa said. “You get a little excited because it causes chaos. They get a little touch and it drops and one of the forwards will pick it up. It creates opportunities for other players.”

Adam Tisdale scored just before Clarkson was about to go on a power play at 9:17 of the third period to give the Golden Knights a victory over Princeton in an ECAC Hockey game before 2,110 fans at Cheel Arena.

Clarkson (14-4-2, 8-2-0) had an extra skater on the ice as Princeton’s Reid Yochim was going to be called for holding as soon as the Tigers could touch the puck and stop play.

Jordan Schneider and Haralds Egle assisted on the winning goal.

Egle scored Clarkson’s first goal during a power play at 9:39 of the first period, with Jack Jacome and Josh Dunne picking up assists.