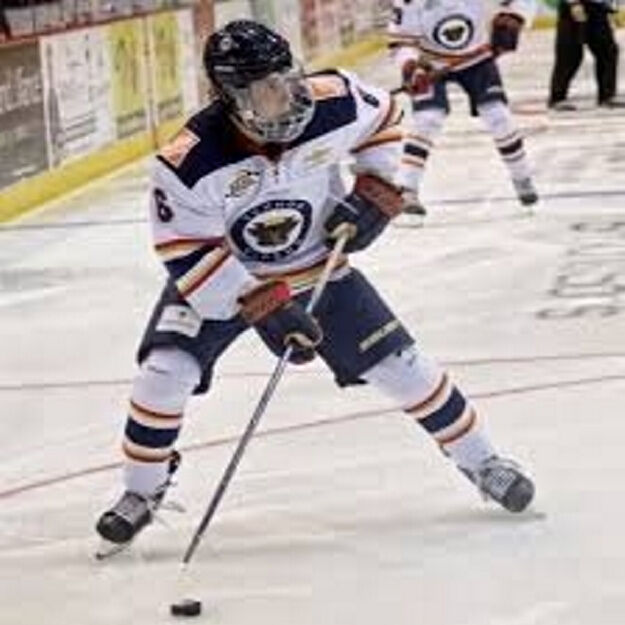 Brasher Falls native Will Arquiett, who is currently a member of Vernon Vipers of the British Columbia Hockey League, signed his letter of intent to play for the St. Lawrence University men’s hockey program starting in the 2021-22 season. Provided photo 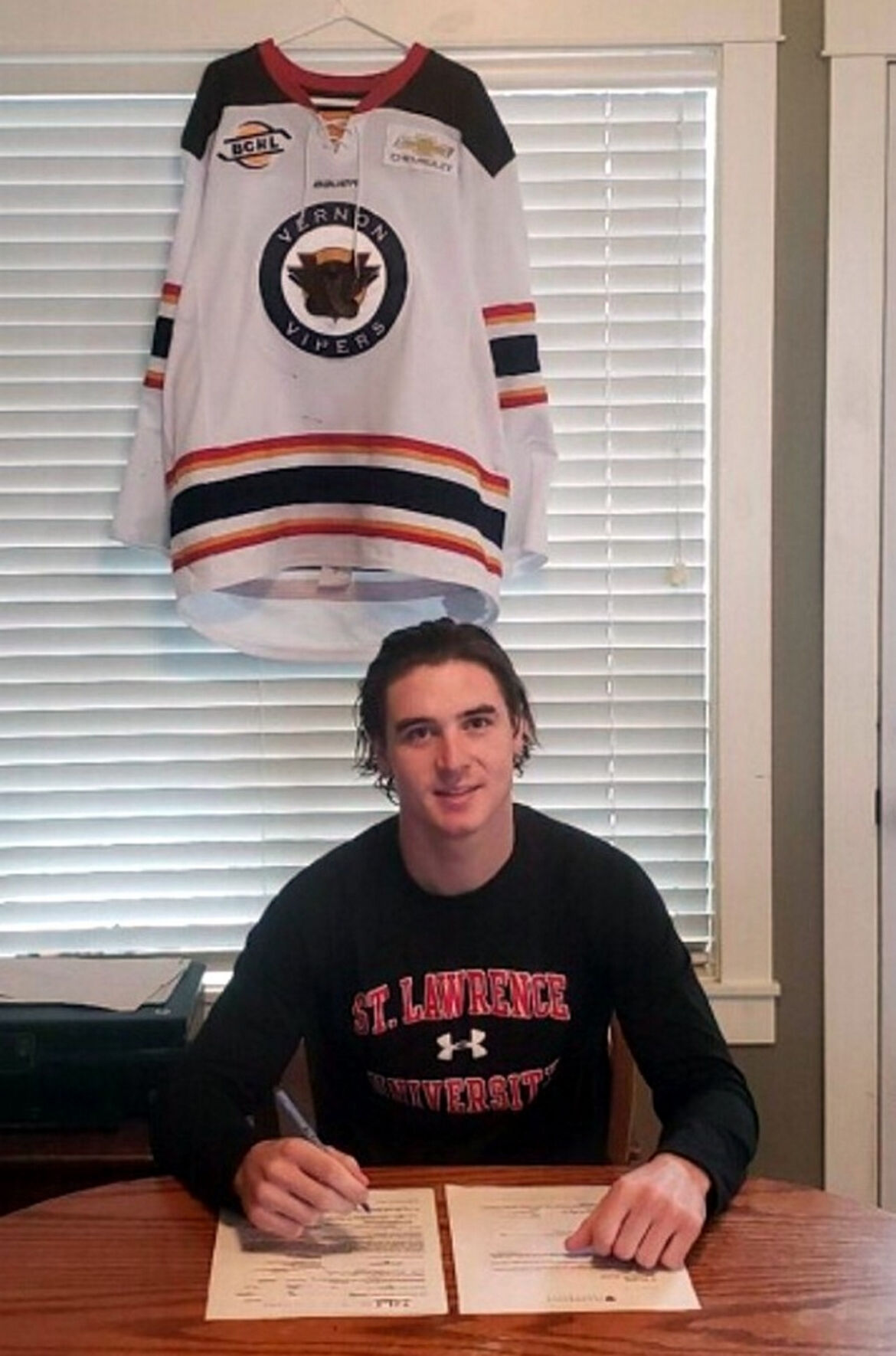 Brasher Falls native Will Arquiett, currently a member of the Vernon Vipers, signs his letter of intent to play for St. Lawrence University. Provided photo

Brasher Falls native Will Arquiett, who is currently a member of Vernon Vipers of the British Columbia Hockey League, signed his letter of intent to play for the St. Lawrence University men’s hockey program starting in the 2021-22 season. Provided photo

Brasher Falls native Will Arquiett, currently a member of the Vernon Vipers, signs his letter of intent to play for St. Lawrence University. Provided photo

“I thought it was really cool when I verbally committed to SLU but to sit down and sign my NLI and make it official, was just awesome. It really is a dream come true,” said Arquiett, who is one of five players in the 2020 recruiting class announced by Saints’ head coach Brent Brekke on Monday.

“I’ve been an SLU fan for a long time,” Arquiett added. “I like that it’s a small school and close to home so that my family can come to the games. That was was very important. It was a long road to get to where I finally signed and now I have a lot more work to do.”

The other four players who made the jump from prospect to SLU recruit along with Arquiett are Drake Burgin, Isaac MacLeod, Chris Pappas and Mason Waite.

“We’re excited to have Will joining our program. He plays hard all the time he’s out on the ice and he’s not just one-dimensional,” said second-year SLU head coach Brent Brekke. “He’s a high-energy, high-compete kid who isn’t afraid to go into the corners and work for the puck.”

“He’s also a real good person. He’s got that infectious personality that makes him the kind of player you want in the locker room,” Brekke added. “He should be able to make an impact on our program right from the start.”

The former St. Lawrence Central and Northwood Prep standout is currently a first-year member of the Vernon Vipers of the British Columbia Hockey League after having been traded from the Cowichan Valley Capitals, where he generated 16 goals and 14 assists in 52 games last winter. Due to coronavirus concerns, the start of the BCHL regular season has been put on hold until Dec. 8, but in 10 preseason games so far, he’s netted four goals and helped set up another. In his three seasons at Northwood Prep in Lake Placid, the tenacious 5-foot, 7-inch, 170-pound Arquiett scored 37 goals and logged another 62 assists for 99 points in 122 games.

“It’s definitely kind of weird right now with all the COVID stuff going around,” said Arquiett, who resides 15 minutes from his home rink with a host family. “Usually, by this time of the year we would have played closed to 25 games, and with all the restrictions here in BC, there isn’t really a whole lot that I’m allowed to do outside the rink.”

“In a typical day, I have to be at the rink for 11 o’clock in the morning. I warm-up and work out for about an hour, then we break for lunch,” he said. There’s a kitchen area here at the rink so a lot of us just hang out here until we have practice, which usually runs from 2:30 to 4. After that, I usually have dinner with my billet family and pretty much stay put for the night.”

Some of the on-ice changes all the players in the BCHL are dealing with this season include the wearing of full face-shields, a mandatory 10-minute misconduct for any physical contact following a blown whistle and limited physical contact along the boards and in front of the net.

“There’s still the normal hitting but they’re not allowing scrums and if the puck gets pinned along the boards, they blow the whistle right away,” he said. “It’s just something that we have to get used to.”

Arquiett’s budding career began at an early age and he has steadily moved up the ranks of amateur hockey.

“I started skating when I was just 18 months old and I’ve always just loved playing hockey,” said Arquiett, whose parents Bill and Denise live in Brasher Falls. “I grew up playing on ponds with my older brother, Trevor, and my cousins. I was always the smallest kid but I never felt small.”

“They really toughened me up,” he added.

At age 13, Arquiett began his high school hockey career in 2013 as an eighth-grader, and got regular playing time under the guidance of veteran Larries coach Mickey Locke.

“Will was really small when he started playing for me but the first thing that stood out was his hyper work ethic,” Locke said. “He always competed so hard and he’s just so tough, he never took a step backwards when he was out on the ice.”

In what was a pivotal move, Arquiett left SLC following his sophomore year so that he could further concentrate on developing his hockey skills at Northwood Prep in Lake Placid, where he ultimately caught the attention of scouts for the Cowichan Valley Capitals of the BCHL, along with numerous college coaches, including Mark Morris, Brekke’s predecessor at SLU.

“I loved Northwood. It was a great experience. I learned a lot about hockey and made a lot friends,” Arquiett said. “I looked around at the different leagues and the BCHL had a lot of players who were college recruits. It’s awesome living in this area. We play in a nice rink in a nice location and we have nice fans. I’ve never gotten homesick.”

“When the coaching staff at SLU switched over, the new coaches contacted me and let me know they were still interested in having me. I really liked the old staff but I’m really happy with the new one,” he added. “I think SLU is a good fit for both of us.”

What follows are brief summaries of the other four members of the SLU men’s hockey recruiting class of 2020.

“Drake is a very good puck-moving defenseman with a strong offensive game. He finished the regular season last year in the Manitoba junior league as the number two defensemen in scoring with 53 points in 60 games played. Drake sees the ice very well and thinks the game at a high level. His skating ability and strong compete make him an excellent two-way defenseman,” Brekke said.

“Oak is a pure goal-scorer. Not many players have a true knack for scoring and Oak has that special talent. Oak’s hockey sense, offensive instincts, and desire to score make him a threat every time he’s on the ice. He has been outstanding in his rookie season so far and we can’t wait to get him in our lineup,” Brekke said.

“Chris is a highly skilled forward with a great hockey IQ,” said Brekke. “After a strong season putting up a point per game in his first season with Brooks last year, he has shown another level to his game and has had a tremendous start. Chris will add a lot of offense to our roster,” Brekke said.

“Mason is a big, strong defenseman with very good abilities. He was named the captain of the Spruce Kings this year and is a young man with great character. We are looking forward to the impact Mason will have on our program over the next four years,” Brekke said.