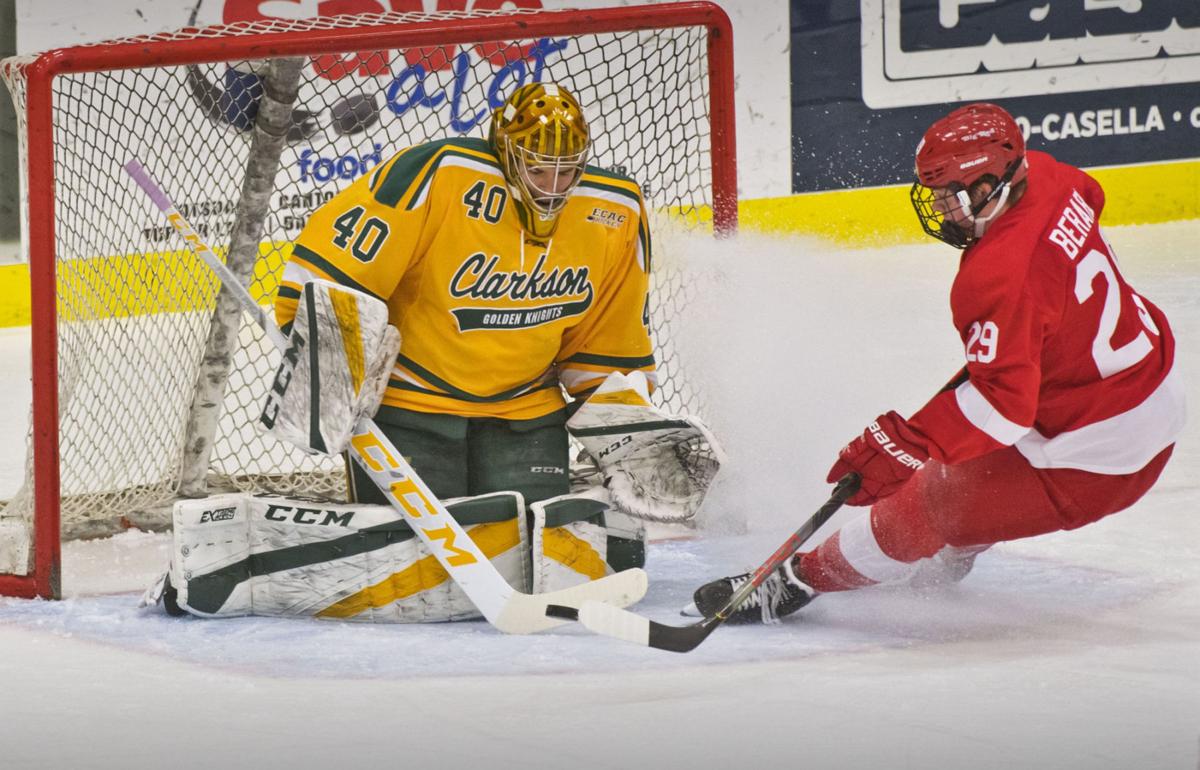 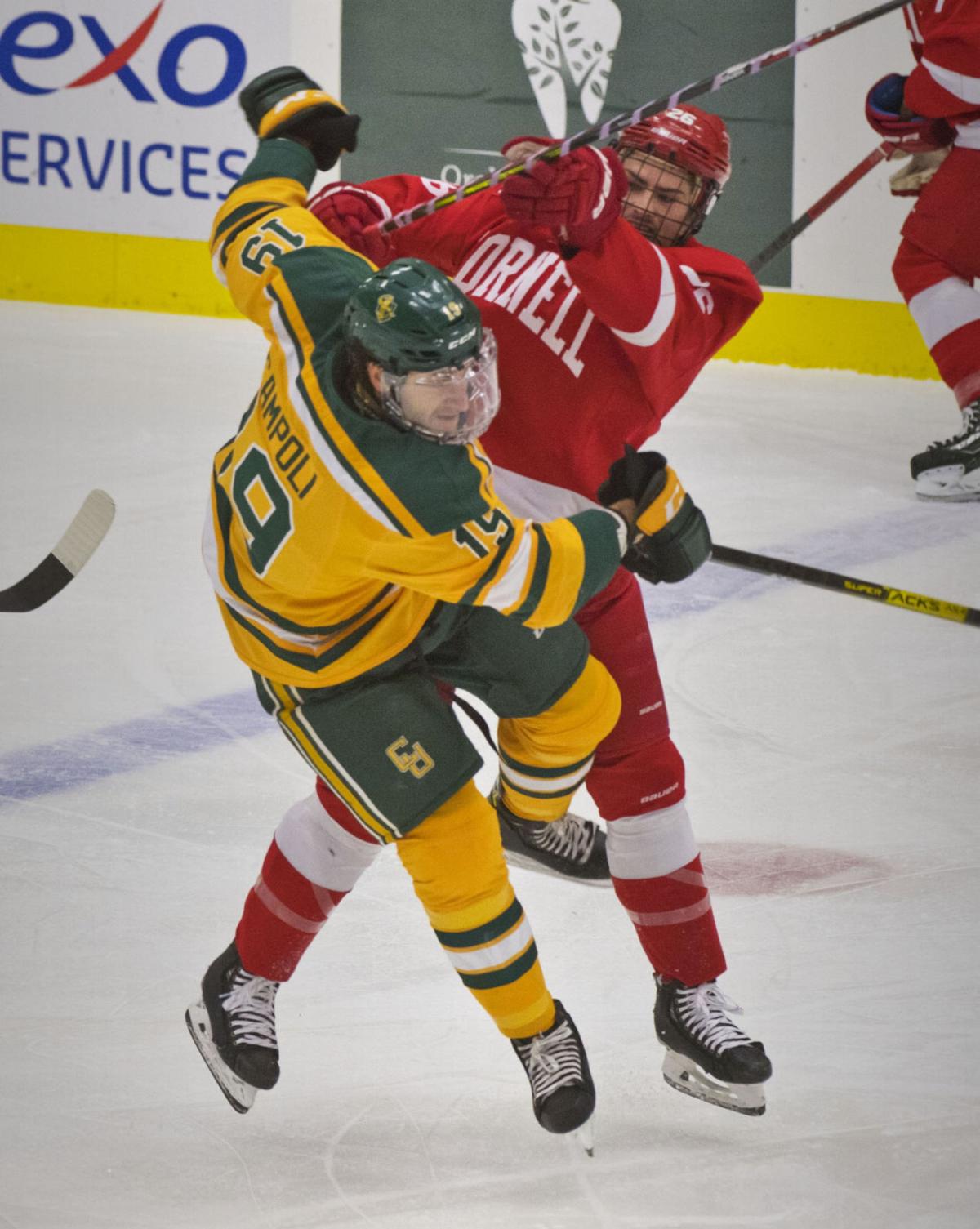 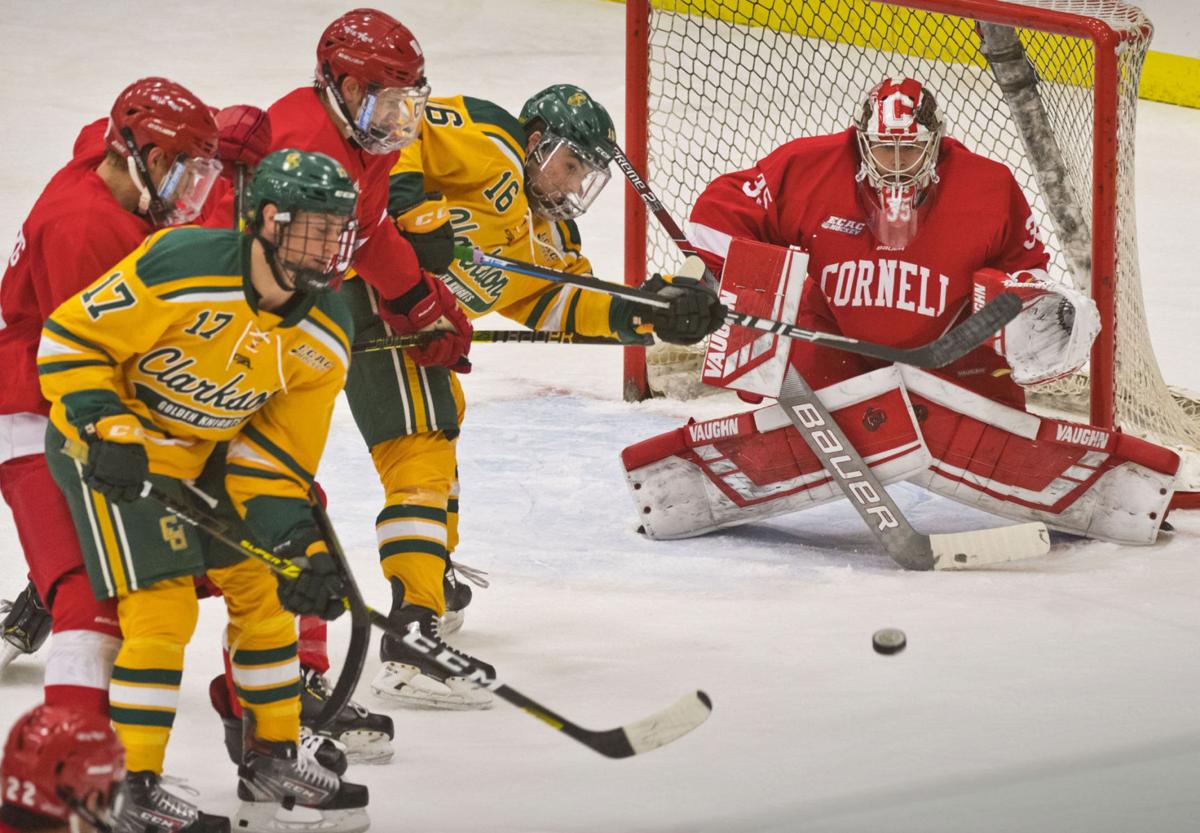 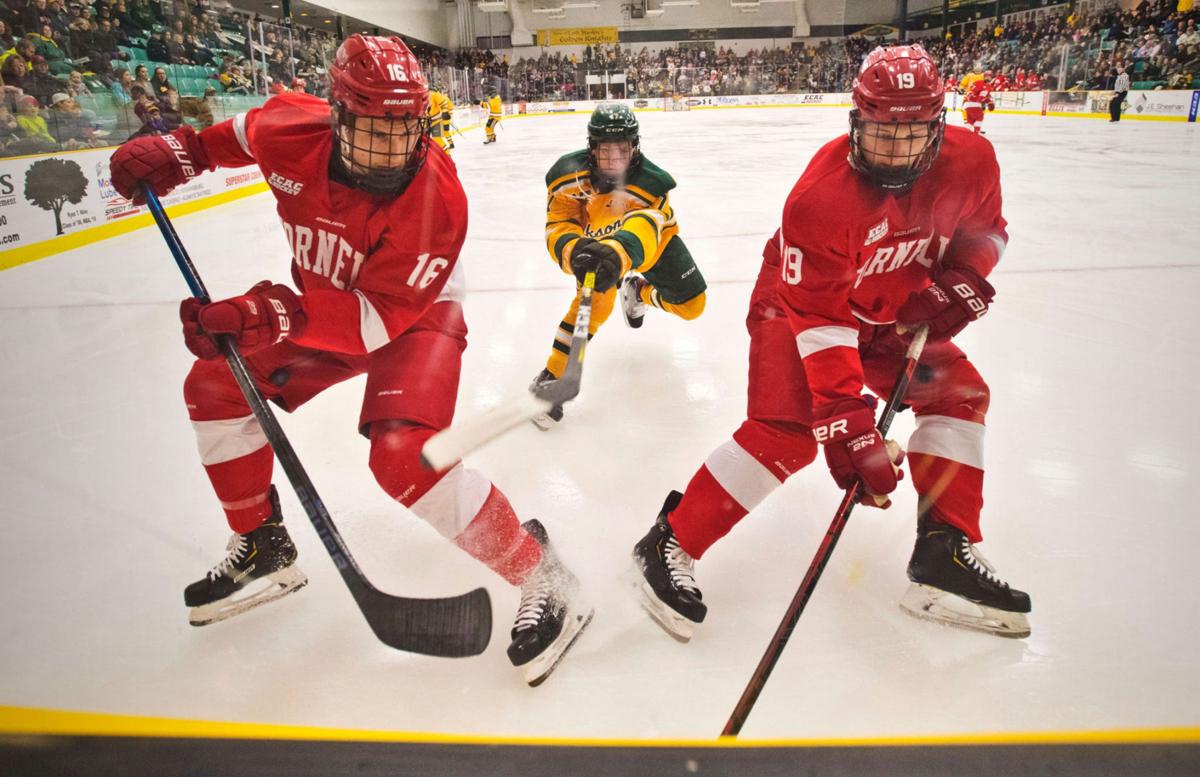 Clarkson’s Zach Tsekos, center, tries to sneak between Cornell’s Matt Cairns, left, and Michael Regush as they chase after a loose puck during the second period. Christopher Lenney/Watertown Daily Times 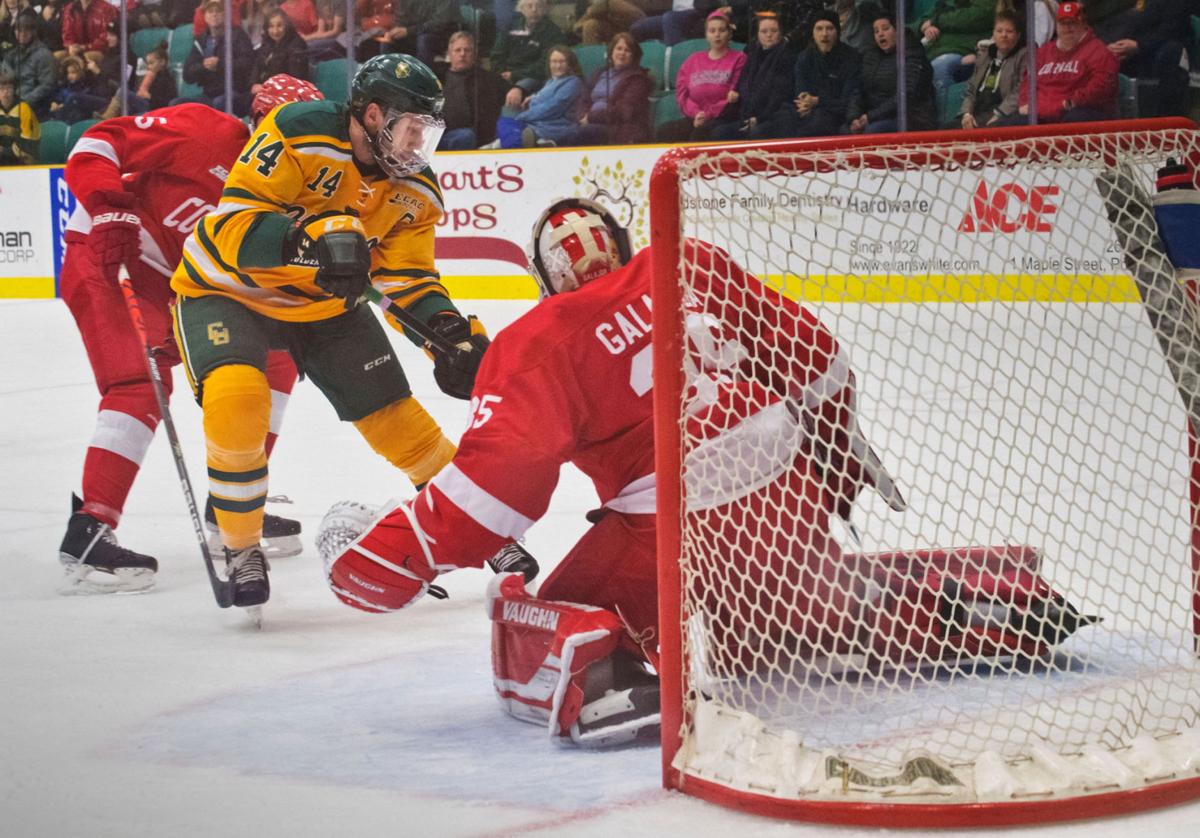 Clarkson’s Zach Tsekos, center, tries to sneak between Cornell’s Matt Cairns, left, and Michael Regush as they chase after a loose puck during the second period. Christopher Lenney/Watertown Daily Times

POTSDAM — Clarkson’s four-game win streak and string of 25 straight penalty kills came to an end Friday night as No. 3 Cornell defeated the No. 7 Golden Knights, 4-2, before a crowd of 2,911 in a men’s ECAC Hockey game at Cheel Arena.

Cornell’s go-ahead goal came on the only power play of the game for the Big Red (5-0 overall, 3-0 conference) when Cam Donaldson put in a rebound of a shot from Ben Berard. Clarkson goalie Frank Marotte made the initial save but he was at the other end of the net, leaving Donaldson a wide-open shot at 10 minutes, 26 seconds of the third period.

“It was a huge deal,” Donaldson said of the win. “We wanted some revenge (for a 3-2 ECAC Hockey championship game loss against Clarkson) and to stay undefeated was huge for us. I was just waiting for a rebound and thankfully it came right to me.”

Donaldson’s goal snapped a streak of 25 kills for Clarkson, who has a 93.3 success rate so far this season.

“I thought we were really good early and we didn’t get anything for it,” Clarkson coach Casey Jones said. “They got a couple goals and we battled back hard and stayed the course. I just thought that we ended up on the short end of the stick tonight in a great hockey game. Our penalty kill has been absolutely phenomenal and we ended up with one of our good guys (Josh Dunne) in the penalty box and that’s the game.”

Cornell actually had the best chance of the period when Berard got a shot off from just outside the crease that went off Marotte’s pad.

The Golden Knights nearly took the lead at 4:42 of the second when Anthony Romano hit the goalpost on a two-on-one breakaway with Zach Tsekos.

Cornell struck first with a goal from Travis Mitchell on the second rebound of shots from Morgan Barron and Donaldson at 11:15 of the second period.

Jeff Malott extended the lead to 2-0 when he scored at 13:27. His goal came about after defenseman Alex Green kept the puck in the zone and sent a pass that deflected off a Clarkson player’s stick right to Malott, who was alone near the net.

The Golden Knights began a comeback just short of two minutes later with a power-play goal from defenseman Connor McCarthy at 15:27, which was set up by a nice pass from Haralds Egle behind the Cornell net.

“Unbelievable pass,” McCarthy said. “(Egle) is known for making those types of plays. I was pretty happy about the (goal). It was kind of a momentum shift. I’m really happy about scoring two quick ones to start the third period fresh.”

Devin Brosseau tied the game at 18:05 of the second period scoring on a pass from McCarthy.

“I think it’s disappointing,” Brosseau said of the loss. “It’s a big-time rival of ours. The words said in the locker room is we feel like we didn’t battle for (60 minutes). It’s a good learning curve for us. It’s early in the season. It showed a little bit of character bouncing back from the 2-0 lead against the No. 3 team in the country.”

The Big Red scored the final goal of the game at 18:33 on an empty-net shot from Michael Regush.

“We have three freshmen defensemen and I thought they played well,” Cornell coach Mike Schafer said. “I thought our team got a little greedy at 2-0 and we didn’t advance pucks. We had a heck of period in the second period. For it to slip away on us was tough. Our goaltender (Matthew Galajda), he was there every stop of the way. I thought (Marotte) played well too. We only got one (power play) and made the most of it in the third period.”

Vaughan played for Canton Tech in the 1980-81 season before finishing his college career with three years at SLU.

Colgate, which outshot SLU 35-24, tied the game 83 seconds into the second period on a goal from Arnaud Vachon, then took the lead for good when Colton Young scored at 7:38.

Bobby McMann scored twice for the Raiders in the third period, extending the lead to 3-1 at 10:30 and then adding an empty-net goal at 19:36.