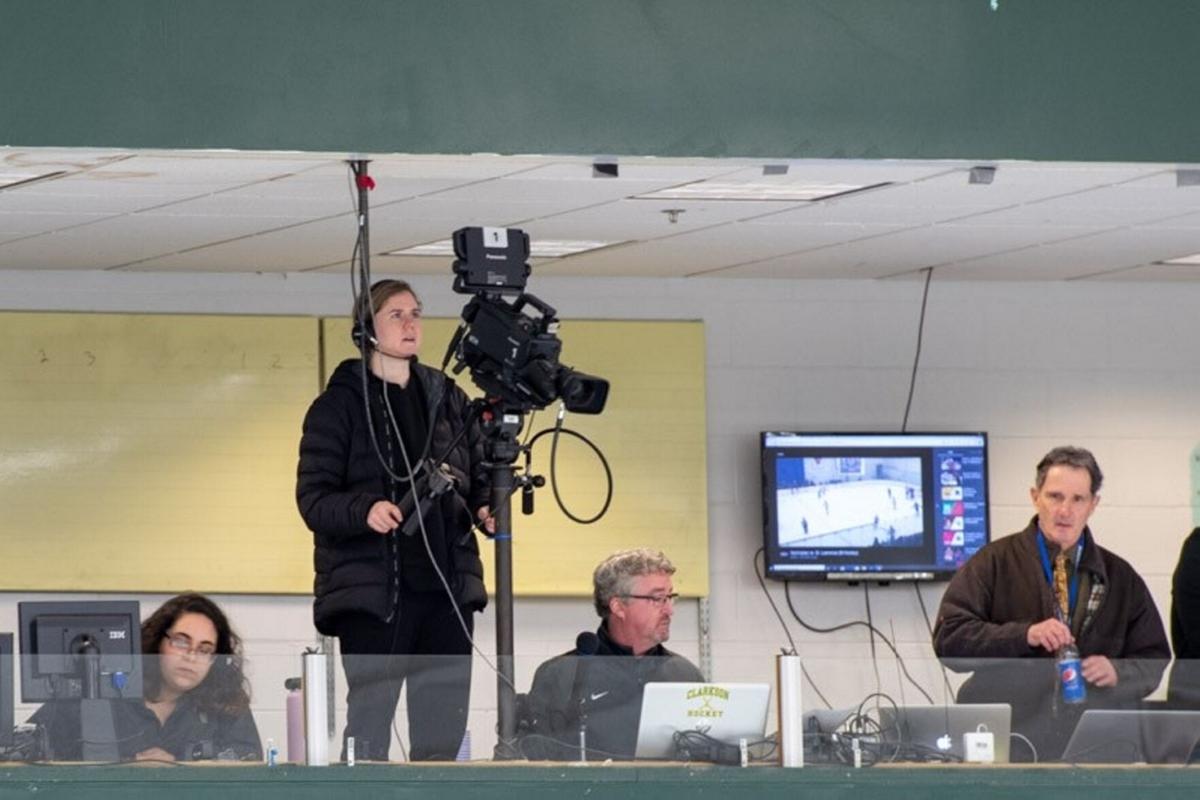 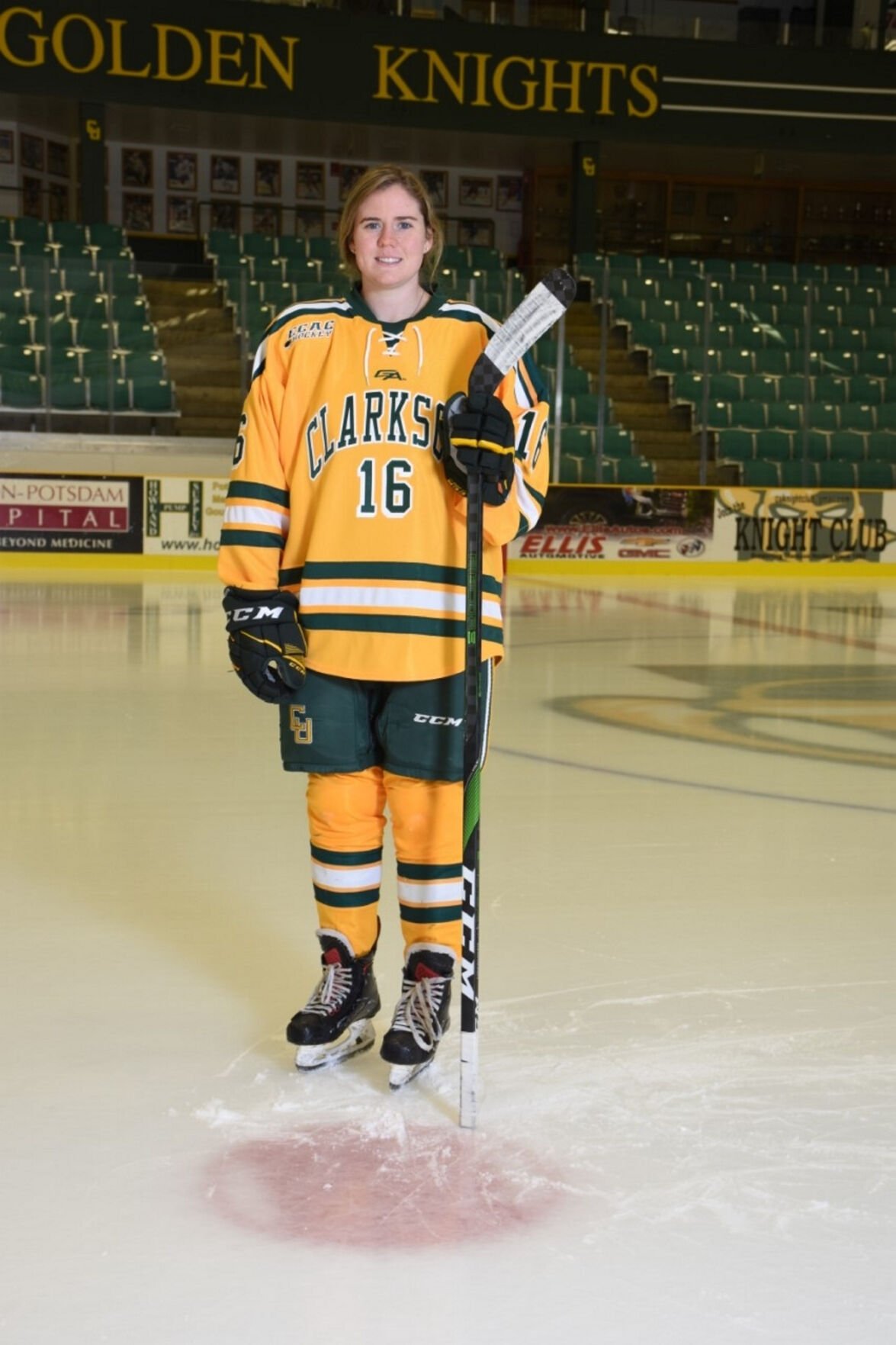 Caitrin Lonergan, a transfer from Boston College, poses in her Clarkson uniform before last season. Lonergan was injured in her first game for Clarkson and didn’t play the rest of the season. Clarkson University photo

Caitrin Lonergan, a transfer from Boston College, poses in her Clarkson uniform before last season. Lonergan was injured in her first game for Clarkson and didn’t play the rest of the season. Clarkson University photo

POTSDAM — After playing three seasons at Boston College, transfer Caitrin Lonergan’s playing career with the Clarkson women’s hockey team has lasted only about half a game.

Lonergan, whose only appearance at Cheel Arena has been as a visiting player, suffered a shoulder injury about halfway through Clarkson’s opening game at Syracuse last season and wound up taking a medical redshirt year.

Her debut at home has been pushed back already this season as Quinnipiac canceled a pair of games this weekend due to COVID-19 concerns. But Clarkson is now scheduled to open its nonconference season with a game at Colgate at 5 p.m. Monday and then hosts the Raiders at 5 p.m. next Wednesday.

“Being injured wasn’t kind of ideal for me,” said Lonergan, a forward. “I was planning on doing one year at Clarkson and learning and gaining all the experience I could. I was able to get to know the team more and figuring out the systems that we do and the outside community. I was able to get more involved and get more comfortable at Clarkson. When I kind of figured out I was redshirting, this year I’ve been grateful for it because I’m able to have a whole other year at Clarkson and get to know the coaches better and the team and not have it be a one-and-done type of thing.”

“It was fun,” Lonergan said. “I got to record the men’s games and I was able to see the game from a different lens. When I was watching, I was doing my job but at the same time I was trying to learn from the boys on the ice and being up top helped me see from a different angle what was going on. I was able to see the power-play set-up and stuff I’ve learned I am able to take in this year. It was a super-cool opportunity. I got to know some of the people in the press box and see how much work is put into our games outside of just us playing. I’m definitely more appreciative of all the behind-the-scenes work that needs to be done.”

Lonergan also was served as a valuable teammate for the women’s squad even though she could not help out on the ice. Late in the season she became almost like a campaign manager for Elizabeth Giguere to win the Patty Kazmaier Award. She also was able to participate in some on-ice practices later in the season.

“She was still able to progress and develop throughout the entire year,” Clarkson coach Matt Desrosiers said. “She was able to see our games. She was still in on team meetings and system meetings. She was able to learn our system in a different way. She was probably the biggest proponent for Giguere winning the (Patty Kazmaier). She was gung-ho. She wanted to do everything she possibly could to help Giguere get recognized, whether that was through social media posts or even trying to come to the coaching staff and ask if she could do certain things to help promote Elizabeth for that award. That’s what you want out of a teammate. She was in a tough situation herself, but she was still able to put her teammates in front of her.”

If she stays healthy this year Lonergan’s name adds another talented offensive player to a Clarkson team that returns Giguere as well as other standout scorers from last year’s 25-6-6 team.

Lonergan enters her senior season with 147 career points, including 69 goals. She averaged 49 points a season at Boston College and the only season she was paired with former Eagle standout Daryl Watts, she helped her win the 2018 Patty Kazmaier Award by playing on the same line and supplying 30 goals and 45 assists in 38 games.

“She’s the type of player that can carry a line,” Desrosiers said. “She’s kind of a workhorse. It’s always 100 miles-an-hour with her and there are times we are trying to get her to slow down a little bit. She’s just out there having fun and she works hard every single shift that she’s out there. She’s got tremendous skill, great speed. She’s the type of teammate and linemate that a lot of kids would want. She’s not afraid to get in and do the dirty work and get pucks out and get it to you. She loves to distribute the puck, she’s not selfish at all and she’s excited for her teammates, when they do well, too.”

The only time before last season that Lonergan, who has played with the U.S. women’s national team, had seen Cheel Arena was on March 16, 2019, when she was a member of the Eagles facing two-time defending national champion Clarkson in an NCAA quarterfinal.

Watts scored a goal 13 minutes, 24 seconds into the game and that lead stood until there was just 3:03 left to play and Clarkson defenseman Josiane Pozzebon scored on a breakaway to tie the score.

The Golden Knights won 2-1 when Giguere scored 14:38 into overtime.

Lonergan had no idea when she went on that trip she would wind up transferring to Clarkson, but looking back she was impressed by a lot of what she saw on and off the ice.

“The first thing that caught my attention was definitely the three national championship banners,” Lonergan said. “When you kind of walk in that was my first time playing in a rink ever seeing a women’s hockey national championship banner, that was definitely something that caught my eye immediately. Seeing three of them was kind of a dream I’ve always had since being in high school, going and winning a national championship. The ice at Clarkson, it was definitely the fastest ice I’ve ever skated on. It was just a really great (practice) skate. I liked how the rink is big enough to see all the fans in the stands and also you feel like you have a great community around you. That was the biggest fan base I’ve ever played in, besides with the national team. Seeing the fans that support Clarkson, and something like that, was definitely special. That was kind of an intimidating factor at first, seeing all these fans and all wearing green and gold.”

Clarkson endured a difficult season with injuries outside of Lonergan’s. In some games later in the season the team had players with more than 400 career points watching from the stands.