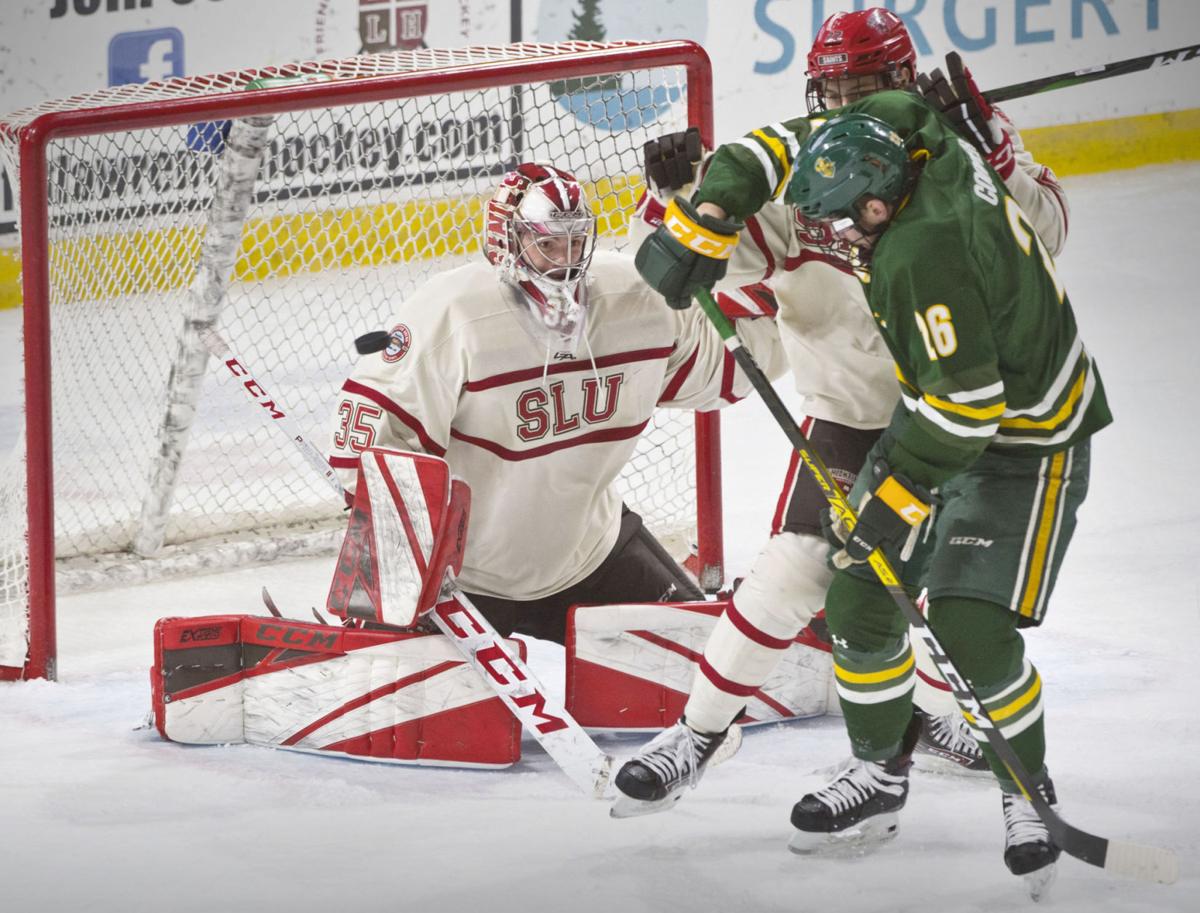 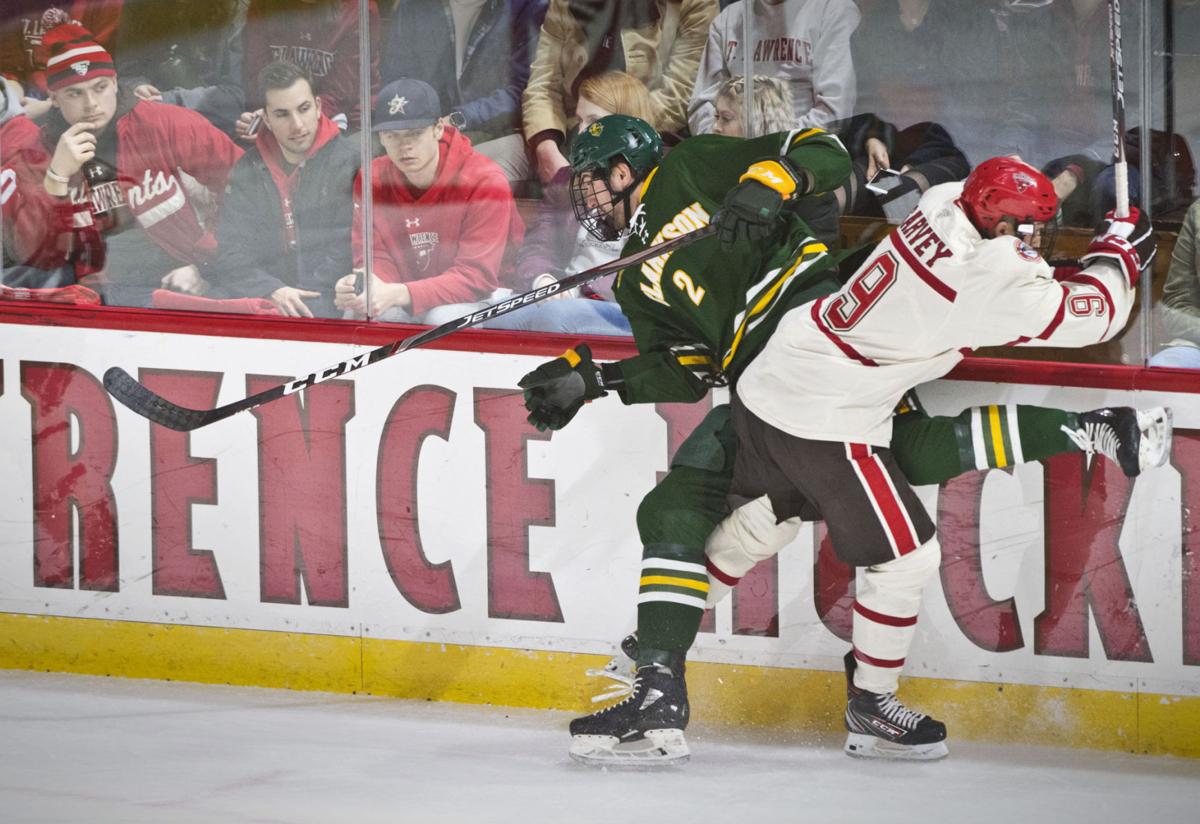 CANTON — With three weeks left in the men’s regular season, and two left in the women’s, the Clarkson and St. Lawrence University hockey teams are trying to position themselves well for both the ECAC Hockey and national postseasons.

Clarkson’s men are tied with Cornell for first place in the conference standings with 26 points with six games left.

They will face each other in Ithaca in the last game of the regular season Feb. 29, which could decide who wins the conference title.

Clarkson faces a tougher schedule than Cornell, with games against the other four top-five teams in the conference. Cornell will play three of the bottom four teams in conference play to close out the season.

The Golden Knights (20-6-2 overall, 13-3 conference) have almost clinched a top-four spot in the conference standings, which would mean a first-round playoff bye and a home quarterfinal series to win a trip to Lake Placid for the championship weekend.

Colgate and Rensselaer are tied for fifth with 17 points, nine behind Clarkson, with 12 possible points left to earn.

SLU (3-21-4, 1-14-1) is in last place with three points and will definitely open the playoffs on the road. The Saints could tie eighth-place Yale, if they win their last six games and Yale loses all of its games, but Yale has the tiebreaker with a 1-0-1 record against the Saints.

Moving up to 11th place is still a possibility for SLU, which is only two points behind Princeton.

At the national level the Clarkson men appear to have an NCAA Tournament appearance ahead, barring a bad finish down the stretch.

Clarkson is ninth in the Pairwise Rankings, which sets the 16-team NCAA Tournament field after the automatic bids for conference tournament championships are earned.

The women’s postseason starts a week earlier than the men’s, and this weekend will be the final regular-season home games for Clarkson and SLU, who host Princeton and Quinnipiac.

The Golden Knights are not officially eliminated from winning the regular-season title, but trail Cornell (21-1-3, 15-0-3) by seven points with eight possible points left to be earned.

Clarkson is just one point ahead of Harvard for fourth place, which is the final home-ice playoff spot. Yale is in fifth with 22 points, four behind Clarkson, and Quinnipiac is in sixth, six points back.

The Saints are three points behind Colgate for seventh place and hold the head-to-head tiebreaker against the Dutchwomen.

Clarkson, which has been to four straight Frozen Fours, is in a more precarious position for making an eighth straight trip to the NCAA Tournament.

The Golden Knights are seventh in the women’s PairWise Rankings and eight teams make the NCAA Tournament.

One spot in the field will go to the College Hockey America champion, which will not be one of the top eight teams.

That means if any of the other conference tournaments are won by a team outside of the top eight, Clarkson would be bumped.

Saturday’s game with Princeton could move Clarkson up a spot or two with a win, as the Tigers are currently fifth.

Last Saturday’s Legends of Appleton game may have ended with a 2-0 loss to Clarkson, but it was still a memorable day for new SLU men’s head coach Brent Brekke, who was a Clarkson assistant last year.

“It’s a great weekend,” Brekke said. “(Fans) saw a good game, it was a good battle. To have (the alumni) back, and the board of trustees, and players from many different eras was awesome. It was an opportunity for our guys to spend time with them and get to know some of the people that laid the foundation in the early decades. That’s special.

“I met a lot of people who have been tremendous as far as sending well wishes and good luck. Just to connect faces with names to the emails and some phone calls was awesome. There is a lot of passion for Saints hockey. The whole weekend kind of displays the tight bond and passion people have for this program.”

Clarkson sophomore Marie-Pier Coulombe was named the ECAC Hockey women’s Goaltender of the Week for the second straight week after shutting out Brown and Yale last weekend.

Columbe finished with 47 saves overall and ranks third nationally with a .948 save percentage and a 1.19 goals-against average.