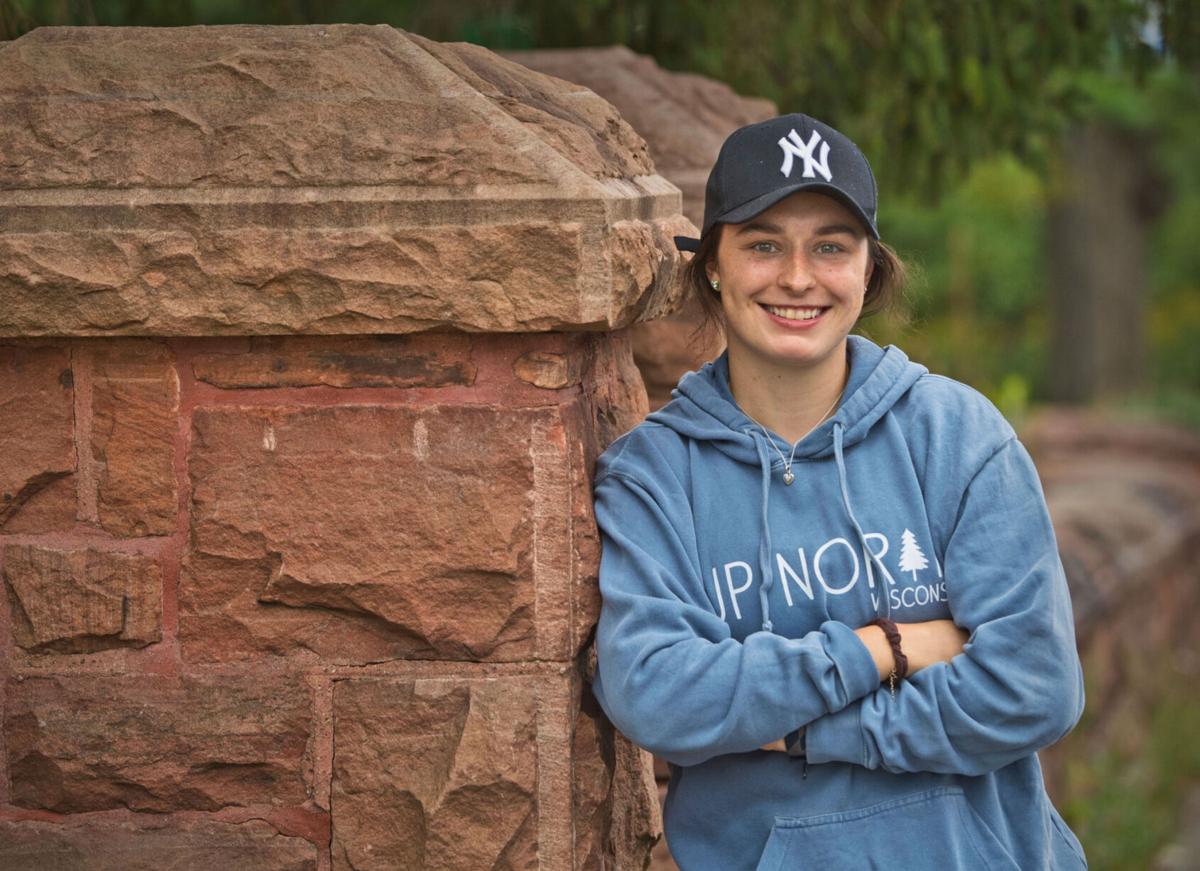 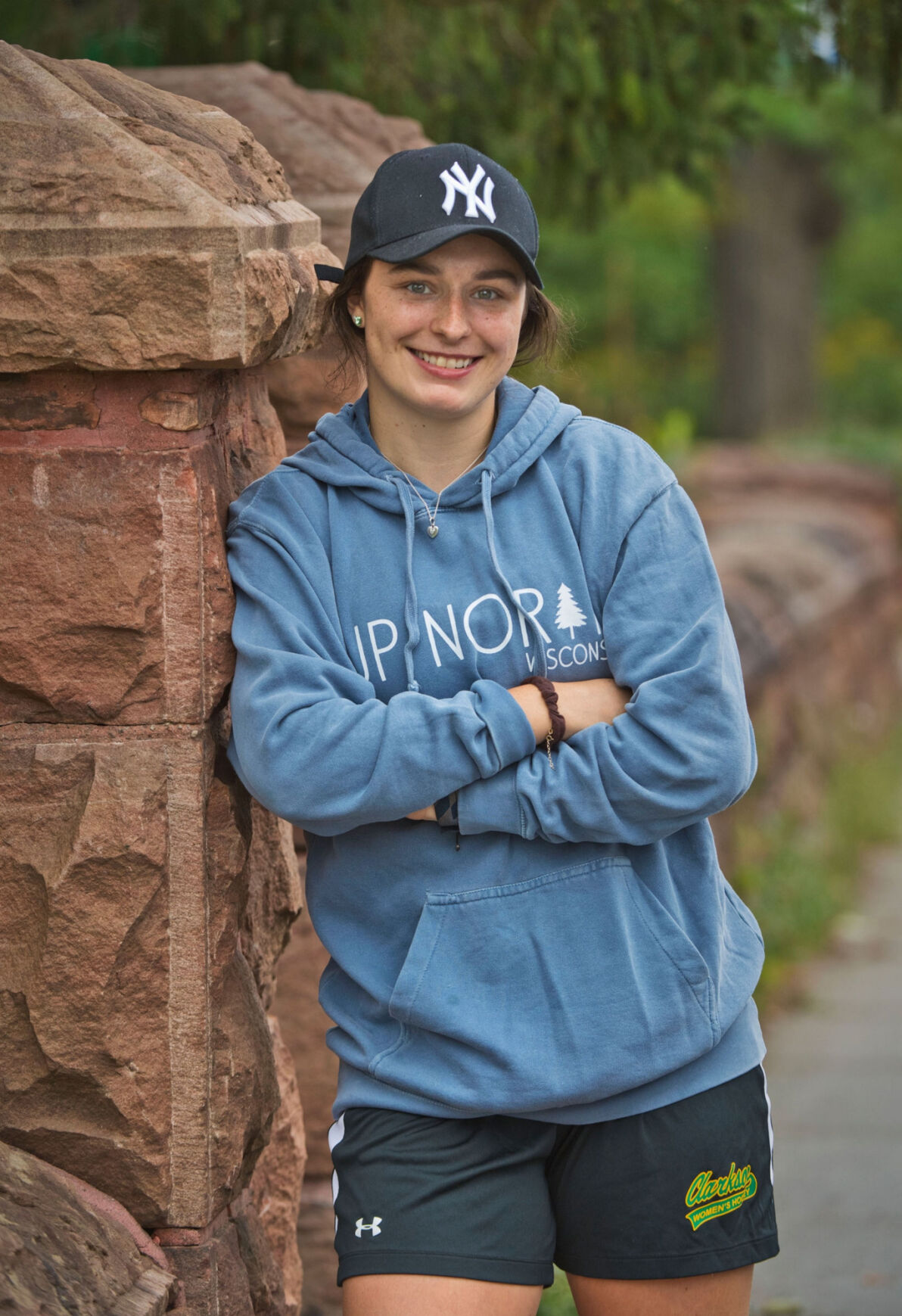 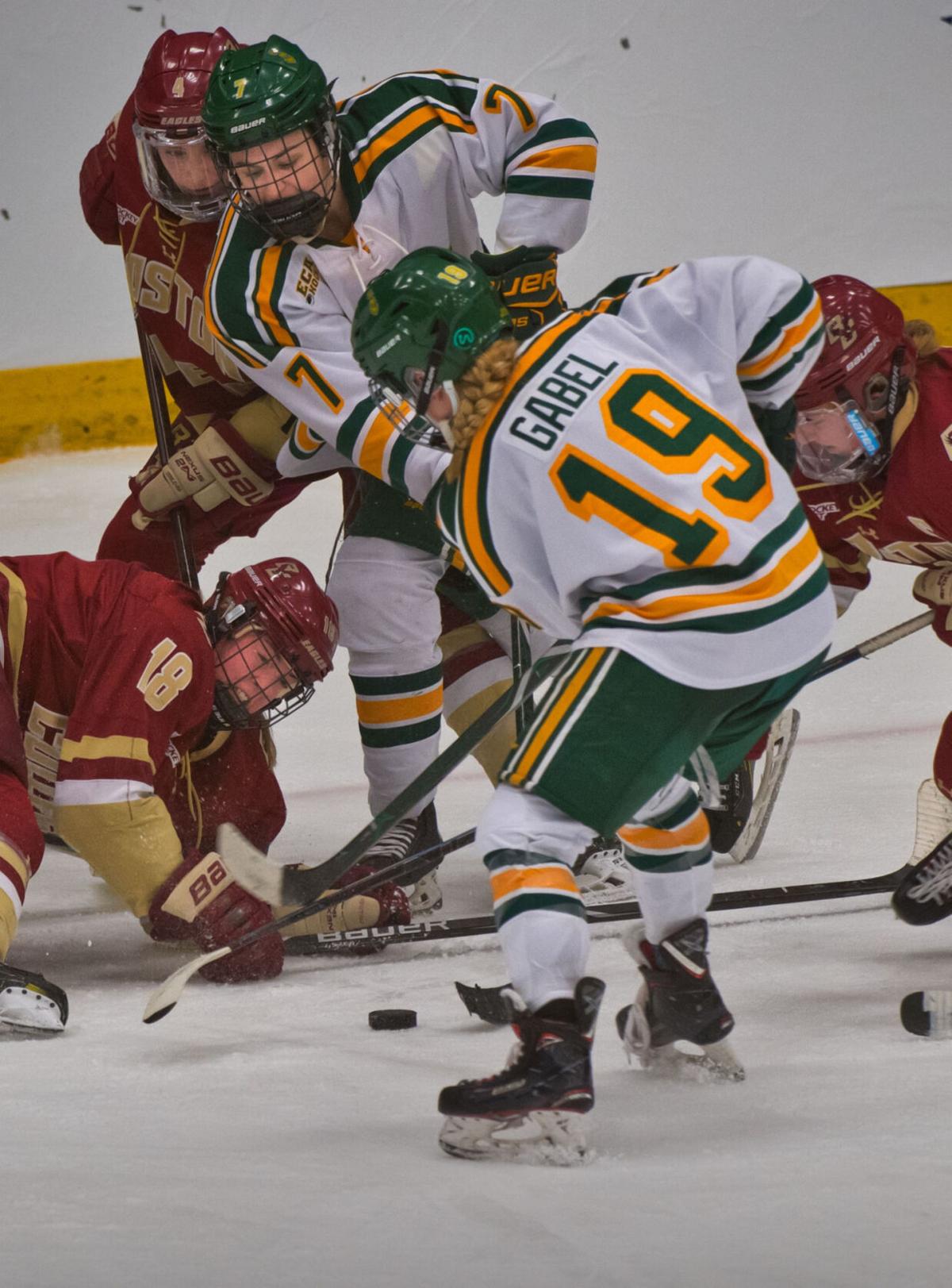 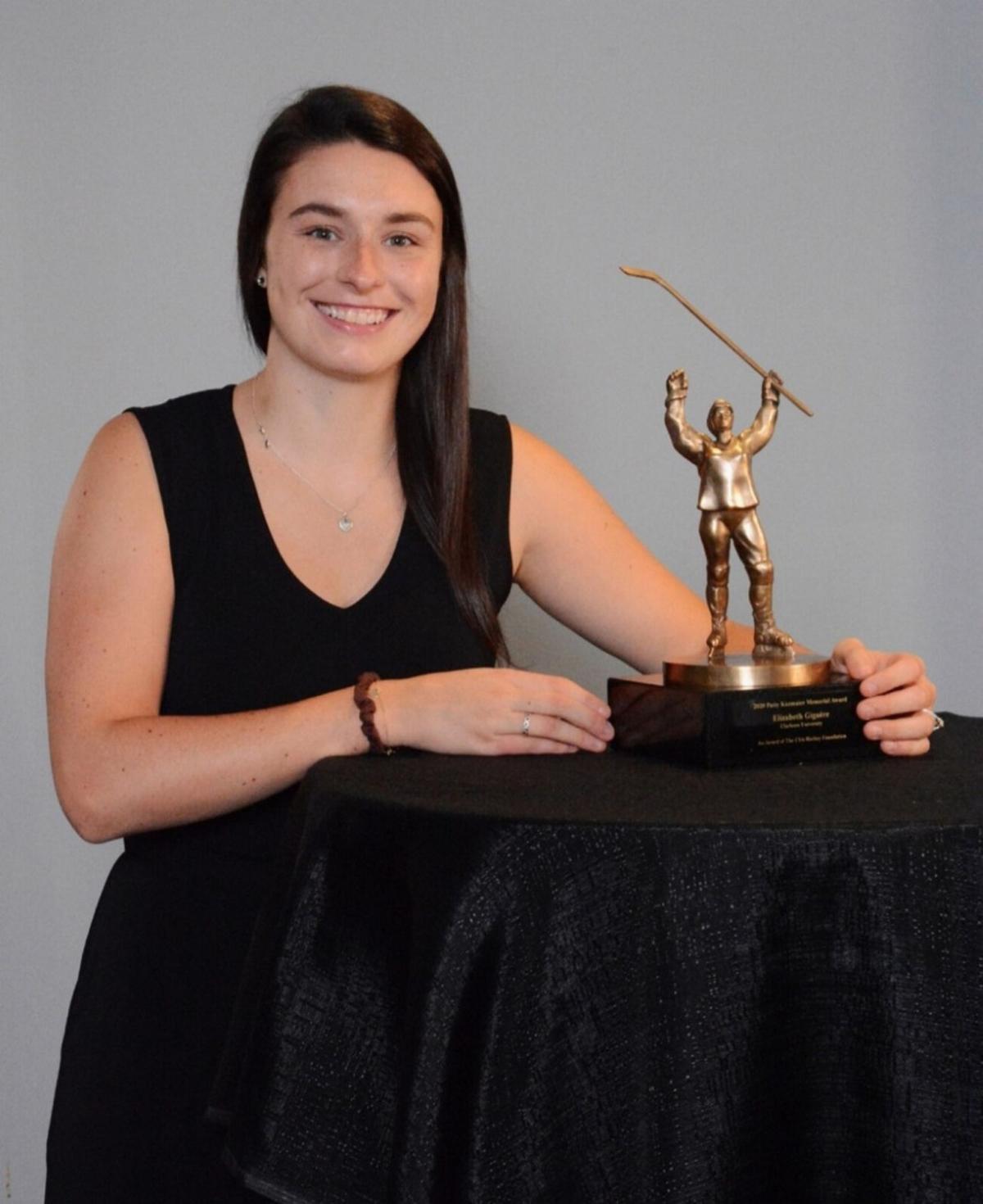 Clarkson’s Elizabeth Giguere poses with the smaller version of the Kazmaier Award trophy, given to the school. Giguere is hoping to be back on the ice by January for a shortened ECAC Hockey season. Clarkson University

Clarkson’s Elizabeth Giguere poses with the smaller version of the Kazmaier Award trophy, given to the school. Giguere is hoping to be back on the ice by January for a shortened ECAC Hockey season. Clarkson University

POTSDAM — Elizabeth Giguere is one of the best young women’s hockey players in the world, but she doesn’t seem to realize it.

Last spring she became the third Clarkson University player to win the Patty Kazmaier Award, which goes to the top player in the nation. Recently an online publication named her the second-best player under age 25 in the world, behind Northeastern University’s Alina Mueller.

On Thursday Giguere walked into a downtown Potsdam coffee house for an interview and none of the customers appeared to know who she was.

That’s perfectly fine with Giguere, who does not like to draw attention to herself but would rather deflect it back to her teammates and team.

It would not be much of an exaggeration to say that Giguere has no idea how many career points she has scored. She heads into her final year with 210 career points and is just three points behind former teammate Loren Gabel’s school record of 213. Odds are that unless the public address announcer says something at that moment, she won’t know when she ties or breaks the record.

Giguere has said a few times she does not care about records.

Giguere, who is 23, often finds out about milestones when her younger brothers, Nicolas (19) or Mathis (8), tell her what she just did in a game.

“He’s adorable,” Giguere said of her youngest brother. “He loves it. These pucks, for 200 points and all that, it always goes to him. He’s always the one who tells me, ‘You are four away from this.’ He’s really happy for me. Even my other brother, he looks at all the stats and he’s so invested in this. It’s just fun to see my brothers love it so much.”

Giguere is from Quebec City, about a five-hour drive from Potsdam. It was not until late in her junior hockey career that she considered coming to the United States to play NCAA hockey. The only other school she said she spoke to was Maine.

“I did not want to go away from home,” she said. “I thought I was going to stay in Canada. Clarkson just clicked. I wasn’t the type of person who would go see a bunch of schools. I just can’t (turn down people). I saw Clarkson and I liked it.”

Clarkson assistant coach Tony Maci saw Giguere play at a few tournaments in Ontario and in October before her freshman season, with some urging from her mother, Nathaly, Giguere decided to come to Potsdam.

“I had no idea what the NCAA was for a long time,” Giguere said. “I always thought I would stay in Quebec and do my thing there. But my mom kind of pushed me out of my comfort zone and said, ‘Go. You will love learning two languages’. I loved it and it was close to home.”

Giguere’s move to the U.S. has made an impact on the Clarkson program that will last after she leaves. Last year, sophomore goalie Marie-Pier Coulombe, who finished with a .949 save percentage, and freshman forward Gabrielle David, who recorded 14 goals and 24 assists, both said that when they saw how well Giguere, a former junior teammate, did in her first year at Clarkson, they each decided to come from their native Quebec themselves.

This season Clarkson has added another player from the same junior program in freshman forward Florence Lessard, who is from Quebec City.

“I didn’t know that,” Giguere said about her former teammates coming to Clarkson because of her success. “If that helped them, going out of their comfort zone and coming here, and they love it and stuff, you’ve got to do it for yourself, you can’t just do it because I did it. All the girls who come here from the same place as me are doing really well. I’m glad if I helped them in that way. Now Quebec City is opening up more and more and girls can decide if they want to stay.”

On the ice Giguere was an immediate success as a Golden Knight. She scored goals in many of her first games and her local breakout game consisted of a two-goal performance against rival St. Lawrence University in a 4-2 victory on Oct. 20, 2017 at Appleton Arena. The following day, as Clarkson raised its 2017 national championship banner, she scored a goal and assisted on four others in a 6-1 win over the Saints.

SLU coach Chris Wells often jokes that Giguere must have compiled half of her career points against the Saints.

Giguere finished her first season with a school freshman record of 71 points and scored the biggest goal of the year, an overtime winner, which was the top play on ESPN’s SportsCenter the next morning, in a 2-1 victory over Colgate, giving Clarkson it’s second straight national title.

For Giguere as a freshman, hockey was her safe zone. She was still adjusting to learning and speaking English in public and that made classwork a challenge.

“School was hard for me,” said Giguere, who didn’t speak English until she was 15. “The girls coming in are a lot better than I was at English. It was pretty rough my first year. Hockey was my escape. I picked up (in school) after my first year. To my closest friends, that year, I would make mistakes (speaking) all the time. They would just laugh it off. At first I withdrew. It took me a couple months to feel like it was fine if they laugh. Every time I go home, I come back here and my English is rusty.”

Giguere spent her first two seasons at Clarkson on a forward line with Loren Gabel, who won the 2019 Patty Kazmaier Award, as well as standout center Michaela Pejzlova. The trio formed the top line in NCAA women’s hockey, combining for 89 goals in the 2017-18 national championship season and 85 goals the following season.

“For me, I have never really been a jealous person,” Giguere said. “If we had three, four or five people like (Gabel), I would have loved that. Me and Loren were friends off the ice. She’s so funny and we would laugh and stuff. I’m not saying we never argued about anything, we probably did. At the end of the day we always played together and did well and loved each other. We are really opposites, but I think that’s what made a great duo.” In typical fashion, when Giguere, who led the nation in scoring as a sophomore, was at Gabel’s Kazmaier ceremony it never crossed her mind that she might win the same award a year later.

“You know me, I didn’t really think about it,” Giguere said. “It happened and it is what it is. It’s really good for the school. I’m glad to be there and be part of Clarkson’s (Kazmaier winners, along with Jamie Lee Rattray in 2014). It’s just fun for the school and I’m proud of Loren.”

COVID-19 ruined the end of last season for Clarkson, which flew to Madison, Wisc., for an NCAA quarterfinal against Wisconsin only to be told when they arrived that the season was canceled and they had to go back home.

“It was sad,” Giguere said. “We got there and they told us we weren’t going to play. Seeing the seniors faces, they started crying. It was pretty sad to see. We were all ready to play.”

The Patty Kazmaier ceremony, which takes place during the off day of the Frozen Four weekend, was canceled and the announcement of the winner delayed and eventually aired online, with Giguere giving a short acceptance speech that she actually had filmed before she even knew if she won.

Even receiving the trophy was an issue as it was mailed late and arrived at her home in Quebec after she already left for Clarkson on August 1.

The only Patty Kazmaier trophy Giguere has held this year is the second copy, which is a bit smaller, and is given the school of the winning player.

But all Giguere cares about is getting onto the ice and being able to play her final season, which now will be shorter than a typical season. Clarkson was scheduled to open at Sacred Heart on Sept. 24-25 but now it appears more likely that they won’t play until November or December with an ECAC Hockey season starting in January.

“I was quarantined two weeks and then we started school a week after,” Giguere said. “It’s been a slow start. We had to work out in our little apartment. We started working out last week and then this week we had our first two skates. That’s been fun. They have been in small groups, I haven’t seen the whole team on the ice. That’s hard. Hopefully, we can be as a team soon. I really hope we get to play. I’m a senior so I really want to play this year. I hope that we get a season in January, which would be fun, even if it’s maybe not all the teams. It’s also about the safety of the people.”

Giguere is studying global supply chain management with a project management minor. She said she does not know what she wants to do after college but she knows she wants to keep playing or coach. It’s possible she could someday find herself on the same line with Gabel again on the Canadian National Team.

“We’ll see,” Giguere said. “That would be amazing to play with (Gabel) again on that level.”