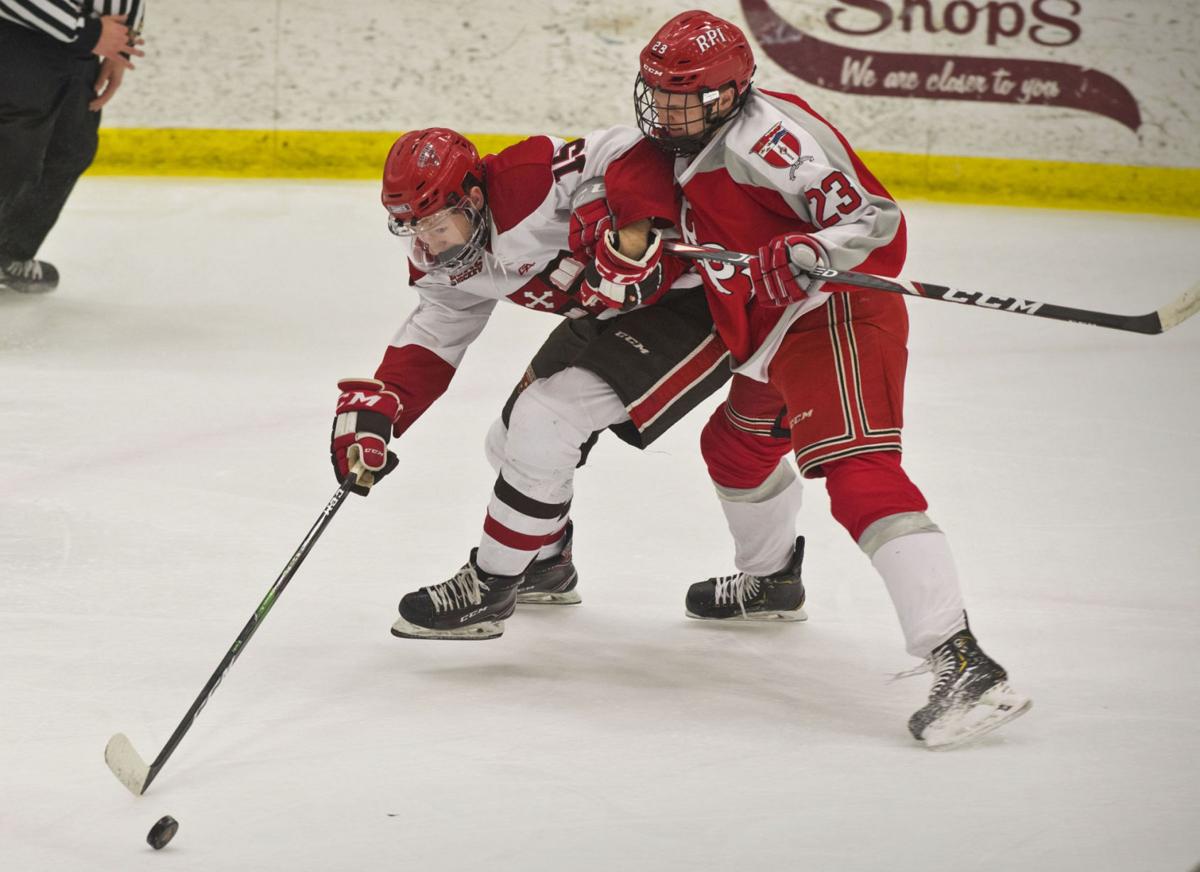 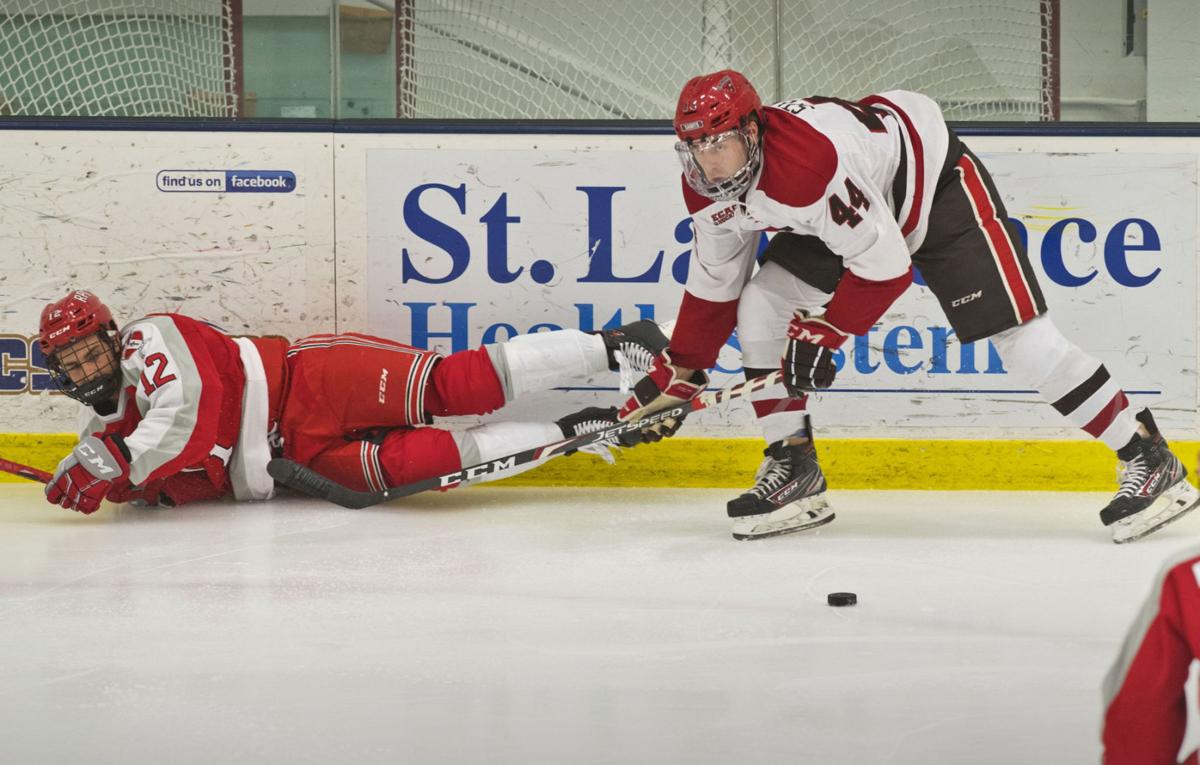 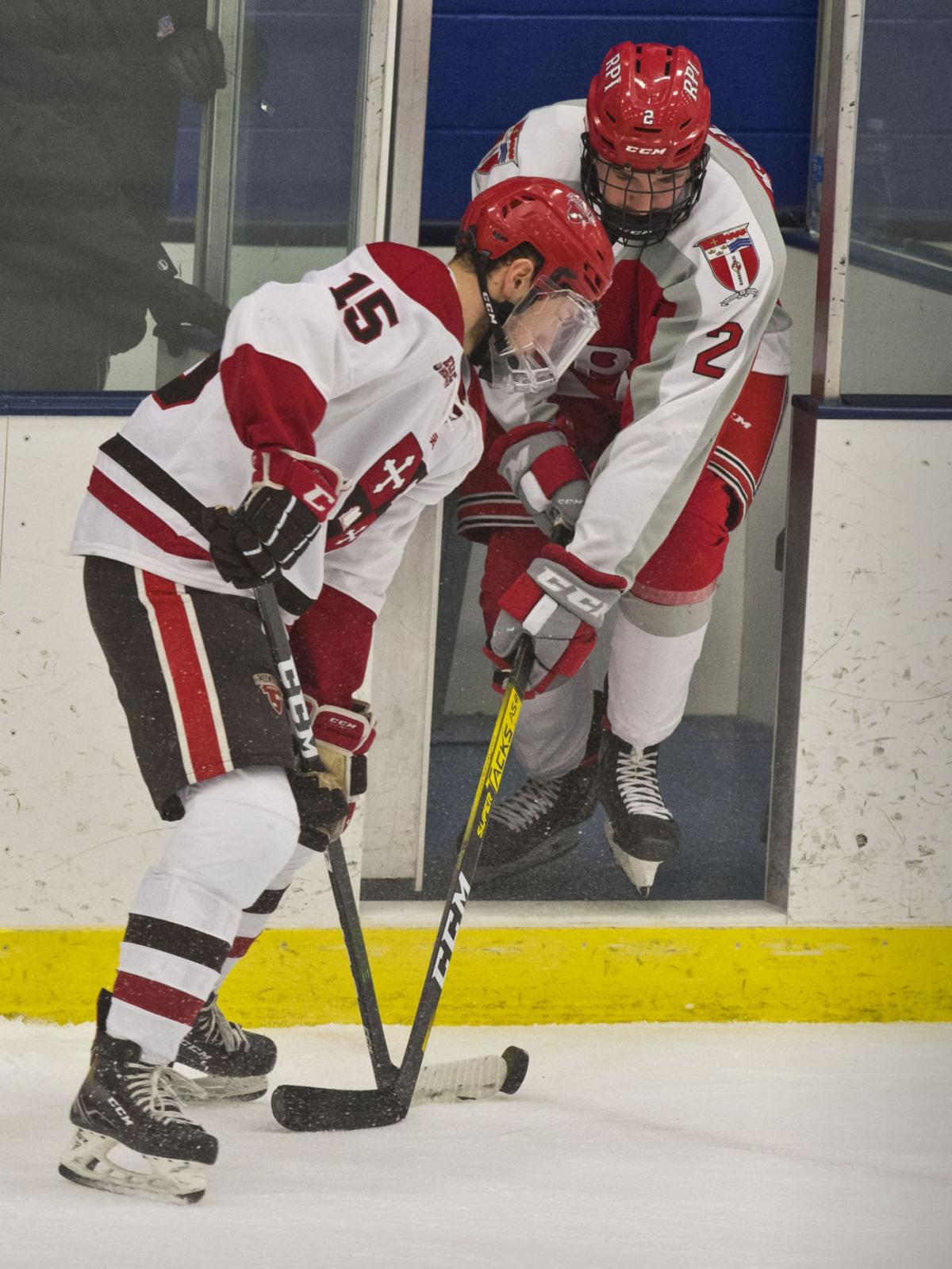 Rensselaer’s Simon Kjellberb is called for interference as he tries to keep the puck away from St. Lawrence’s Jacob Nielson before exiting the penalty box Saturday during the first period. Christopher Lenney/Watertown Daily Times 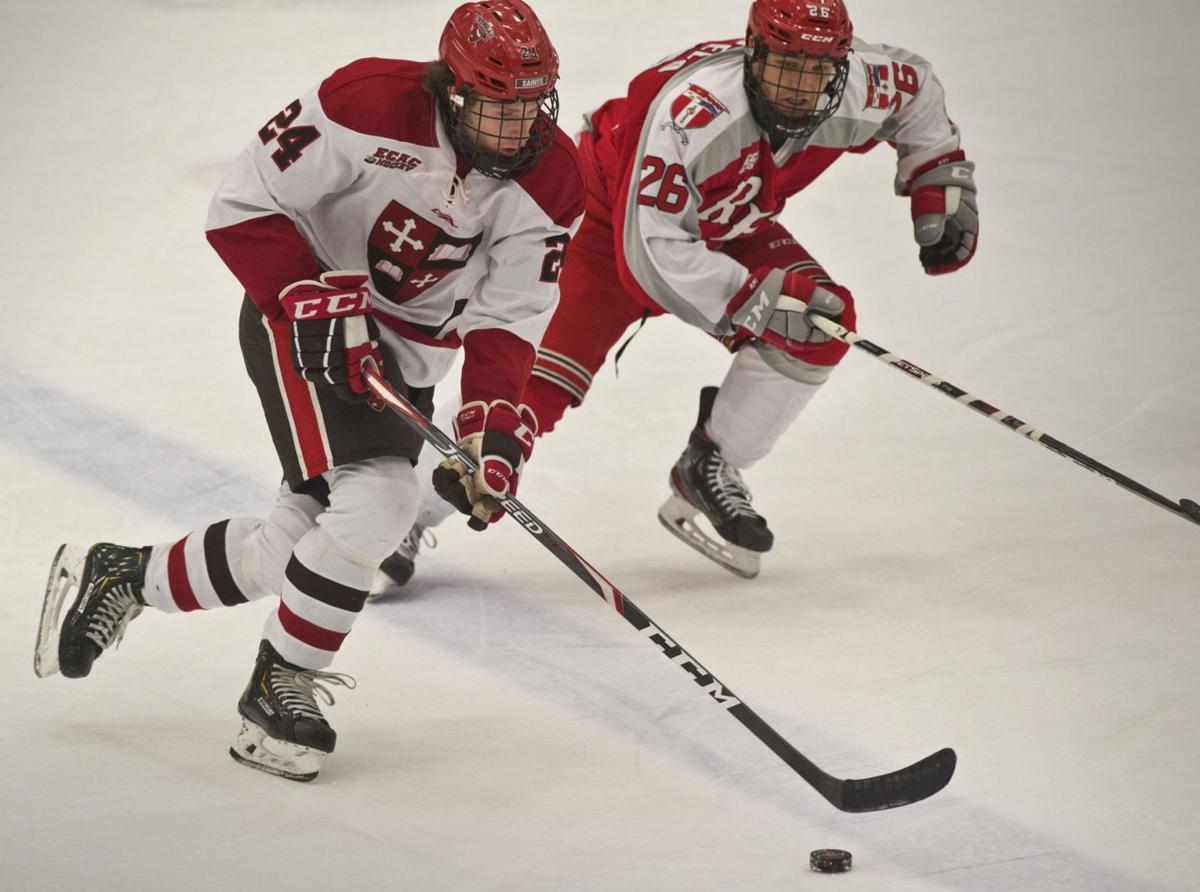 St. Lawrence’s Cameron Buhl is pressured by Rensselaer’s Jake Marrello as he tries to bring the puck up ice during the second period Saturday. Christopher Lenney/Watertown Daily Times 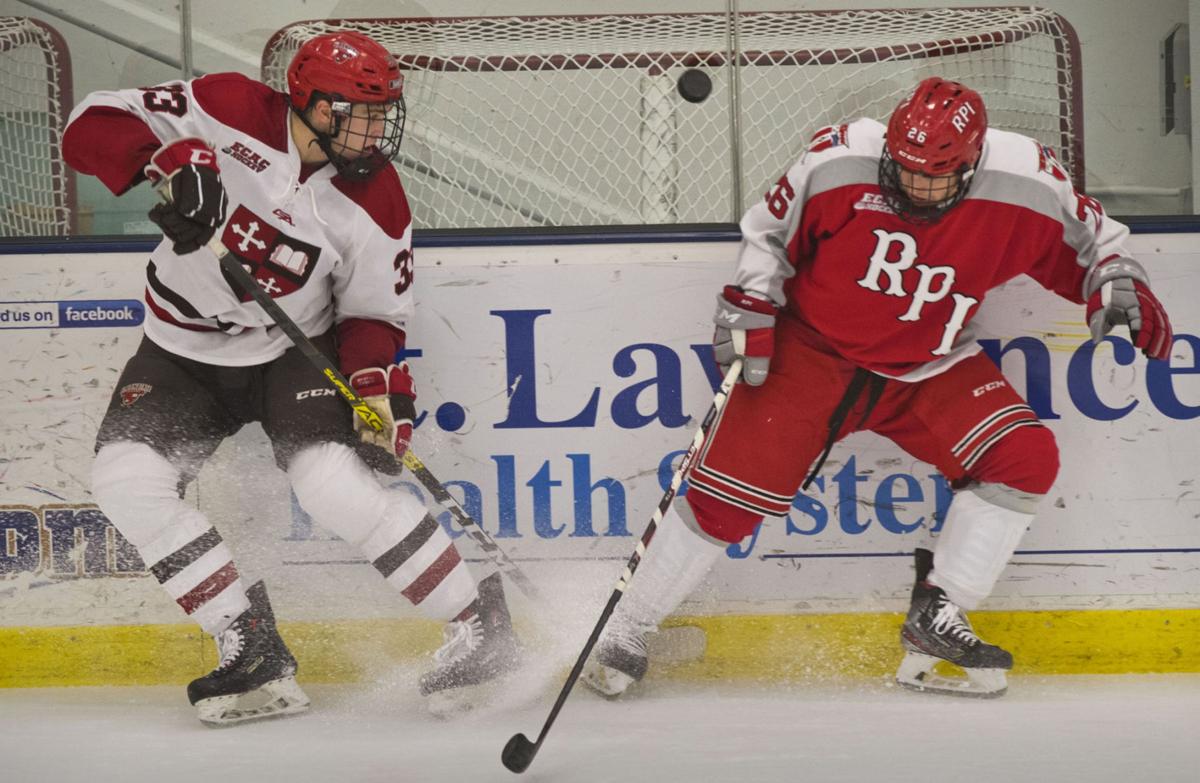 The puck pops into the air as St. Lawrence’s Tim Makowski and Rensselaer’s Jake Marrello meet along the boards during the second period Saturday. Christopher Lenney/Watertown Daily Times 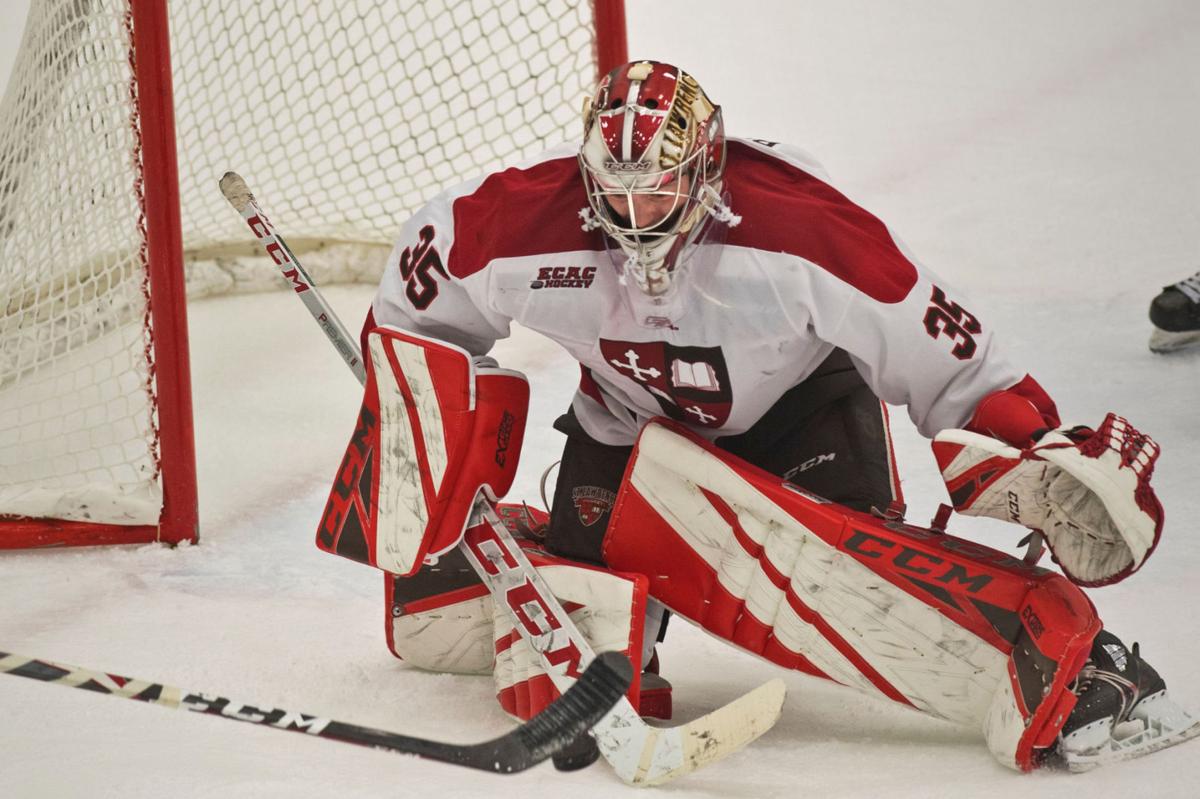 Rensselaer’s Simon Kjellberb is called for interference as he tries to keep the puck away from St. Lawrence’s Jacob Nielson before exiting the penalty box Saturday during the first period. Christopher Lenney/Watertown Daily Times

St. Lawrence’s Cameron Buhl is pressured by Rensselaer’s Jake Marrello as he tries to bring the puck up ice during the second period Saturday. Christopher Lenney/Watertown Daily Times

The puck pops into the air as St. Lawrence’s Tim Makowski and Rensselaer’s Jake Marrello meet along the boards during the second period Saturday. Christopher Lenney/Watertown Daily Times

CANTON — The St. Lawrence University men’s hockey team nearly won their first game at SUNY Canton on Friday night, but Saturday left coach Brent Brekke disappointed with the team’s effort in a 3-0 loss to Rensselaer in an ECAC Hockey contest.

“I didn’t think we showed up to compete the way we had been,” Brekke said. “I thought our effort and our compete overall was not to the standard of what we’ve typically been, so that was disappointing right from the start. Our execution of the puck was bad. We didn’t make plays tonight.”

The Saints (3-15-3 overall, 1-8 conference) get one last chance to win at their temporary home when they host Quinnipiac and Princeton next weekend. The remainder of the home season is slated for the renovated Appleton Arena.

Ryan Garvey was the offensive star in Friday’s 5-4 overtime loss to Union, delivering a hat trick in a game the Saints led 3-1 after two periods. But he picked up a tripping penalty in overtime that led to the winning goal from Chaz Zmedsrud, causing Brekke to make him a healthy scratch Saturday against the Engineers.

“That’s unacceptable,” Brekke said of Garvey’s penalty. “That’s the accountability standard in our program, stuff that’s not acceptable and we are not going to put up with it. Unfortunately he made the poor decision and it cost us the game. It’s a tough lesson to learn, and we learn it as a collective group.”

RPI struck first Saturday, just as it did Friday in the upset win over Clarkson.

Tristan Ashbrook scored his third goal of the season at 16 minutes, 18 seconds, to give RPI the lead for good, with Mike Gornall and Ottoville Leppanen assisting.

“That first (goal), (Leppanen) made a good play, just a good, hard low play and (Gornall) went down and battled and came up with the puck and I just tried to find a little bit of open ice,” Ashbrook said. “First goal is always huge. I think we were really trying to do that both nights and it paid off.”

RPI controlled play in the opening period, outshooting the Saints 12-6, and also outshot SLU 14-8 in a scoreless second period.

“I think last night was a better game for us, I don’t think we played to our capabilities tonight,” said Saints captain Dylan Woolf. “We could have been better across the board and that’s what it’s going to take for us to win right now and get out of the funk.”

Patrick Polino gave RPI a more comfortable advantage when he scored the second goal for the Engineers at 12:53 of the third period.

“I thought we had to really battle,” RPI coach Dave Smith said. “Through two periods (Owen Savory) made some really big saves to keep it 1-0. That third period was one of our best periods of the year, a real mature period. We cycled pucks, controlled the play and really limited any chances that they had until they had the extra attacker. It was a harder game tonight, with just the flow. I thought last night we were crisp and sharp from start to finish. Tonight it was a harder game to just execute the simple things and we were sloppy at times.”

Ashbrook added an empty-net goal at 16:35, with Will Reilly assisting, to end the scoring.

Owen Savory stopped 25 shots for his first shutout of the season.

The Engineers entered the weekend having allowed an average of 3.23 goals, but held No. 4 Clarkson to just one goal before blanking the Saints on Saturday.

“It was just communication, we just emphasized we were going to have to talk a lot coming up here to the north country, a hard place to play,” said Reilly, a defenseman. “Every (defenseman) was talking. The goalies were talking and it worked out for us.”

Frank Marotte made 19 saves for his second shutout of the season as the Golden Knights defeated Union (6-14-1, 4-6) in an ECAC Hockey game before 2,463 at Cheel Arena.

Clarkson (13-4-2, 7-2) bounced back from a 3-1 loss to Rensselaer on Friday by scoring twice in the first period to knock off the Dutchmen.

Haralds Egle scored the first goal for the Golden Knights with a power-play tally at 9:07, with Zach Tsekos and Connor McCarthy assisting.

McCarthy extended the lead to 2-0 with a goal with 11 seconds left in the period with Josh Dunne and Chris Klack assisting.