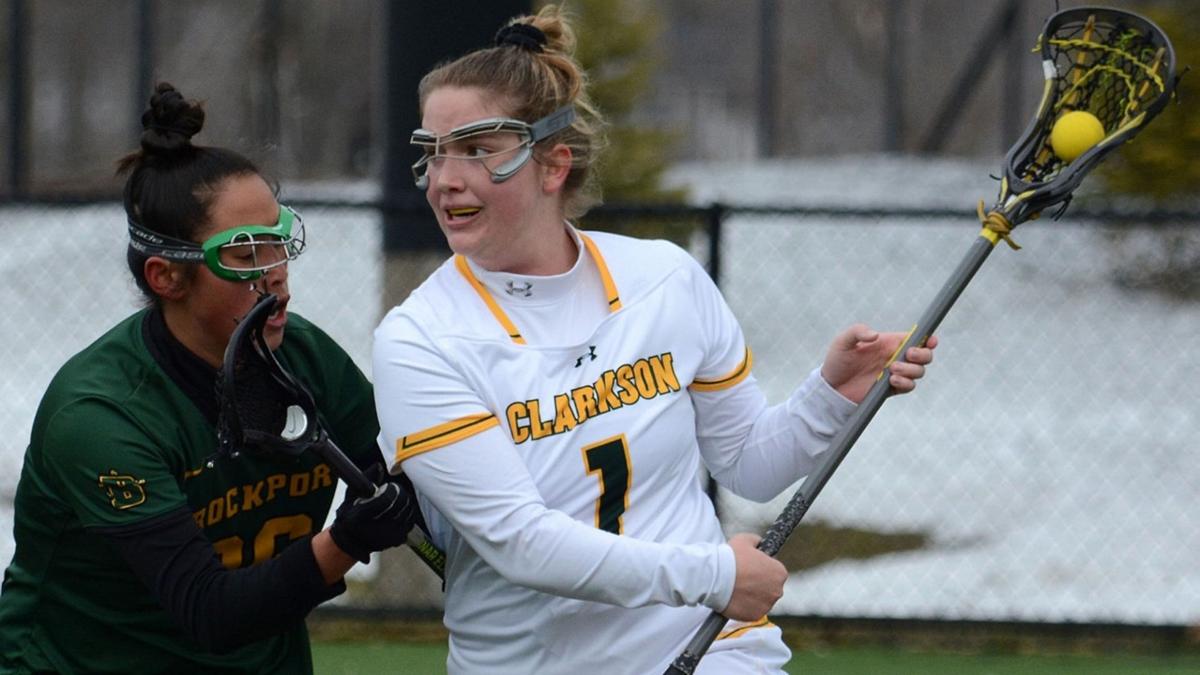 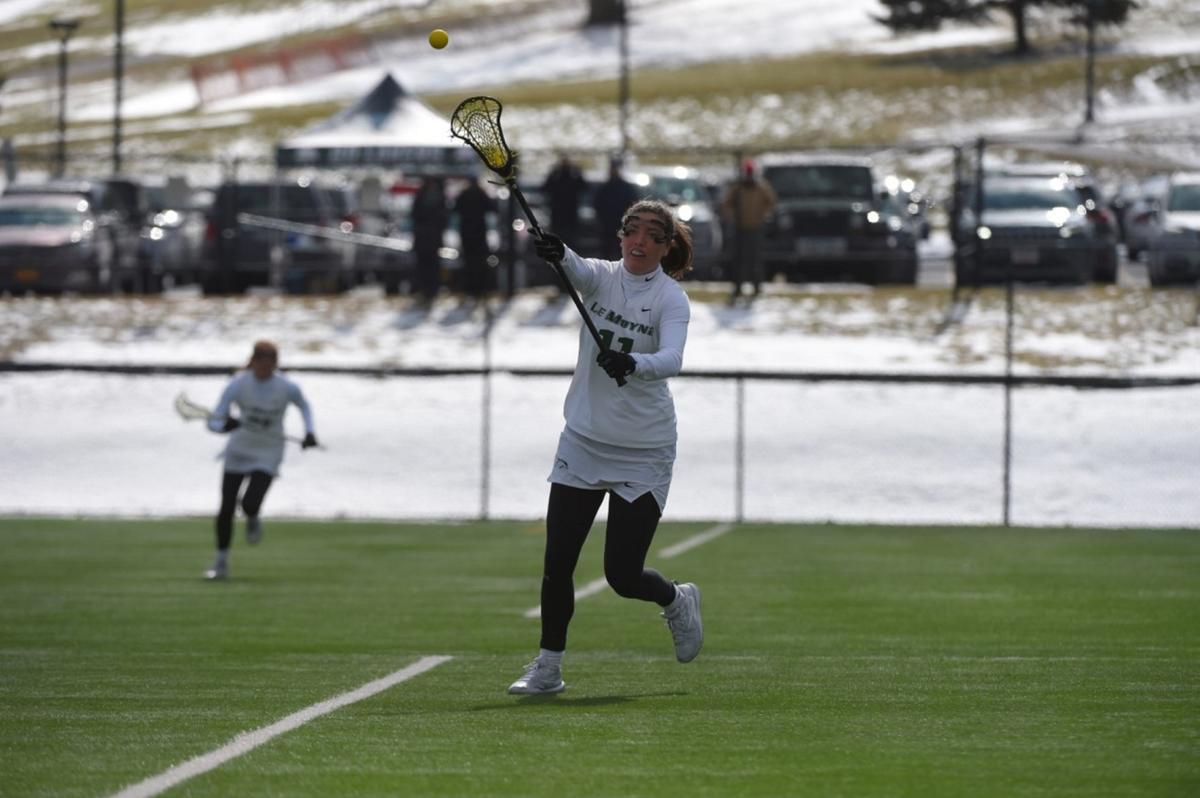 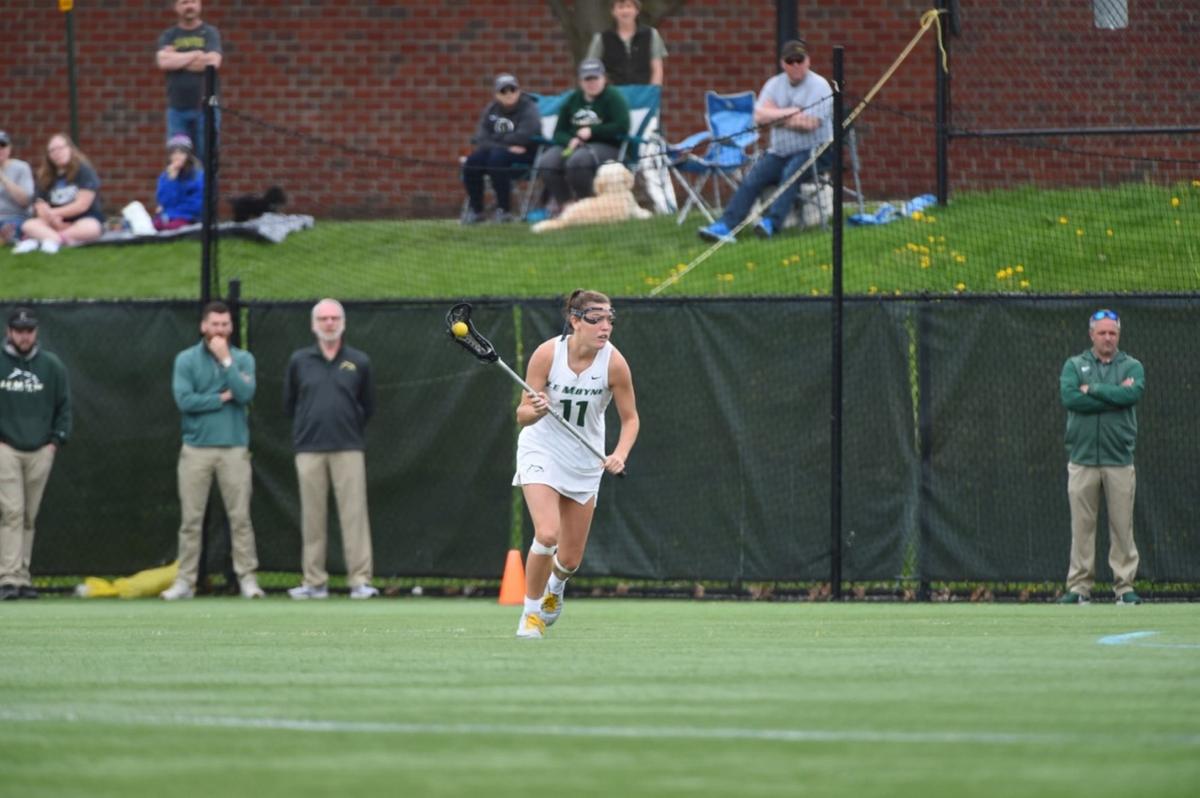 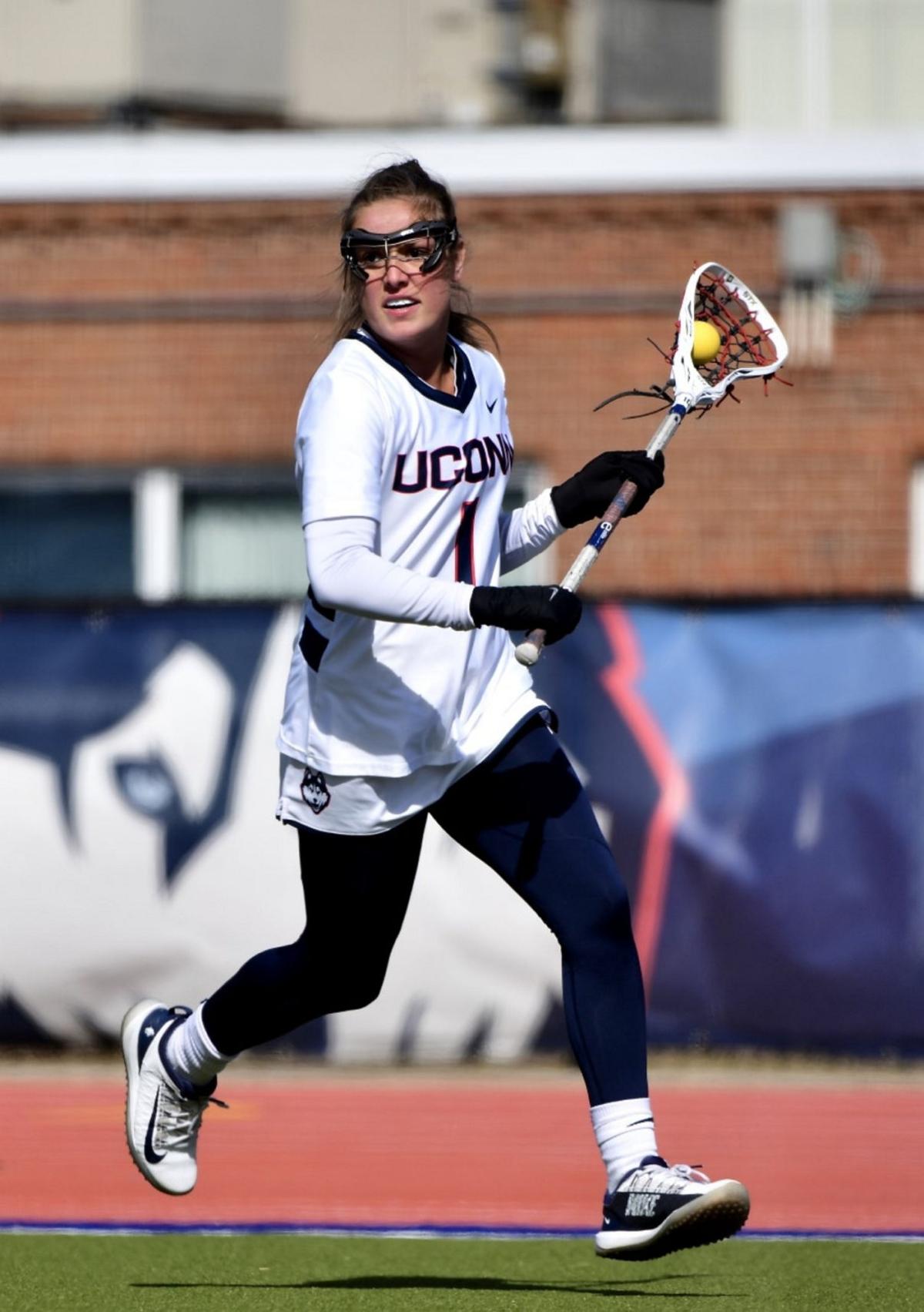 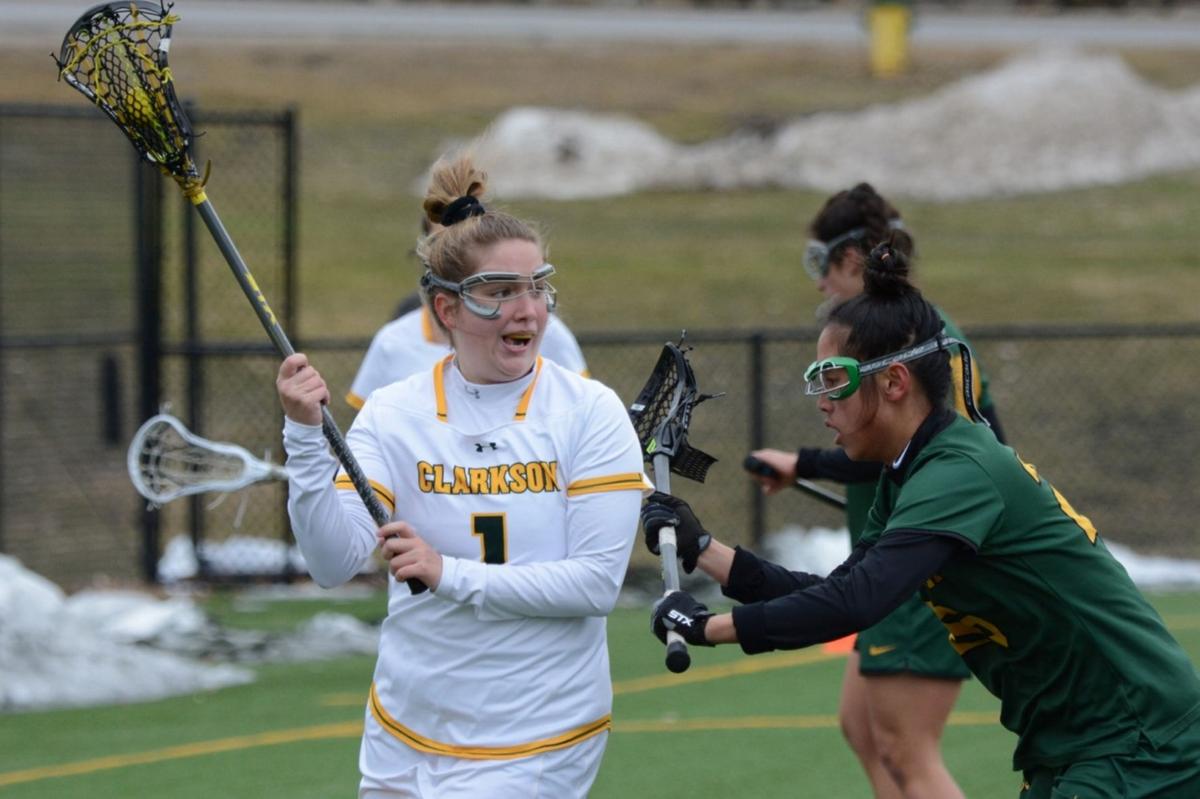 About this time of the spring sports season, Sidney Hall and her Le Moyne College teammates would have likely been in the heart of a drive through the playoffs.

Two years ago as a sophomore, Hall helped guide the Dolphins to their first national championship in women’s lacrosse in mid-May.

“It was an unreal experience, I still talk about it all the time today,” Hall recalled. “It was awesome, I feel like just all the training in preseason and in the fall and then during the season, at that moment it all paid off and it was just something that was super unique and cool to our team.”

But even with this year’s season being wiped out because of the coronavirus pandemic, there appears to be a silver lining for Hall and a potential one for lacrosse athletes from the Frontier League.

Hall, a senior at Le Moyne, has chosen to return for another season of lacrosse at the school, after the NCAA ruled that seniors in all spring sports throughout the country have been granted an extra year of athletic eligibility.

“So, so far there’s probably a solid three or four, maybe five (seniors returning),” she said. “There’s two girls that have just moved on just because they have jobs, one has a job in Boston and one is in New York City. Those two girls are not coming back at all.”

For Hall, things seemed to have worked out for her both academically and athletically, as she plans to remain at Le Moyne for graduate studies in analytics.

“Obviously our coaches really want all of our graduating seniors to come back,” Hall said. “... I think ultimately the financial decision worked out and I think athletically I was able to play and academically there’s something that I want to do in the Madden School, which is the business school there. I just think it all worked out in that manner.”

Hall recently completed her undergraduate degree at the school with a tri-major in business analytics, finance and marketing. Le Moyne is also offering a discount in tuition for its master’s degree programs.

“At first, I didn’t really know what my decision was going to be, not knowing what the job market was going to be like after this,” Hall said. “Is anybody going to be hiring? And that kind of stuff. And I just felt furthering my education and I love Le Moyne and I would love to be back with the culture there.

“I think missing my senior season in lacrosse is something that I’ll never get back, so maybe coming back for a fifth year will kind of give me that gratification as well.”

On the field, the Dolphins got off to a 4-0 start this year, and were poised to make a run at another title in the Northeast-10 Conference.

“I think most of our teammates were pretty gutted,” Hall recalled. “I just think not knowing was probably the worst part, we were looking forward to potentially coming back, but we kind of had to sit around and wait to see what the decisions were through the NCAA, the Northeast-10 and all the other conferences.”

Hall contributed 14 points, including four goals this season, and has totaled 133 goals and 99 assists for 232 points so far in her career with the Dolphins.

“We stay connected pretty well, we have virtual team meetings on Zoom every Monday and we’re actually getting together for a virtual senior night this Sunday,” Hall said. “That’s something that’s nice that we’re able to stay connected through it all, even though we’re not with each other all the time.”

Hall is also looking forward to getting a chance to play one more season with her sister Molly Hall, a sophomore attack for the Dolphins this season.

“It’s awesome,” Hall said. “I’m excited, too, because she’s growing as a player and she’s going into her junior year, and I’m excited to maybe chase national championship with her again. Especially since before with not knowing what was going to happen with our season, but obviously getting a second chance is something that’s nice.”

In the Division III ranks, Clarkson senior Lexi Smith, a Carthage graduate, is still undecided about returning for another season, but she’s certainly excited about the possibility.

“Definitely, it’s a great opportunity especially at Clarkson because futhering my education for the future and being able to play at the same time would be pretty cool,” Smith said.

Smith is curious about the idea and plans to look further into the specifics involved.

“It’s kind of like 50-50 honestly at this point,” Smith said. “I haven’t looked into a lot of the programs really yet, that I could get into with my biology. But especially since we just finished, I’ve kind of been holding off to do research on that until I finished with all my finals (exams) and stuff like that.”

Clarkson had its season halted after four games after the Liberty League canceled its spring seasons because of the coronavirus.

“I remember we were literally about to practice and us four captains went out to ask our coach a question and he literally got the phone call then,” Smith said. “We were all heartbroken. It was something that obviously we knew was a possiblity because other schools had closed before us. But once we actually found out that it was the whole NCAA, it was heartbreaking for sure.”

She continued: “We had played some nonleague games, we played some tougher teams this year because coach wanted us to kind of build us up for the season, our league is extremely competitive. But we were really getting our momentum to go into league play, so it stinks we weren’t able to show that this year.”

As an attack, Smith started for the Golden Knights for four years and totaled 62 points, including 32 goals, in 57 career games.

“I’ve been a starter for four years, but my first three years I kind of played more like a utility role,” she said. “I wasn’t huge into scoring or anything, but I was kind of just there to do my part. But this year, we lost our top scorers, so it was really crucial that we all chipped in, so I started to contribute more in that aspect.”

“He’s been reaching out to all of us,” Smith said of Gaebel. “Looking into things that we could apply to and figuring out the financial aspect of it. He’s definitely been extremely proactive in that aspect because he wants nothing more then for us to come back.”

Some senior lacrosse players are choosing not to return for another year of the sport, simply because they had already made plans beyond graduation, such as the University of Connecticut’s Olivia Miles.

Miles, a Watertown High School graduate had started in all seven games this year for the Huskies before their season was canceled.

Miles said she would have considered returning to UConn for one final lacrosse season, but she had already landed a job in Charlotte, N.C.

“I am definitely thankful I’ve been given this opportunity to move down to Charlotte and especially getting a job in the field I studied,” said Miles, who said she hopes to venture into the marketing and advertising fields. “Going to a large school has given me the opportunities to network and make connections that have led me here. Despite the current conditions, I am very blessed and fortunate.”

Miles, who helped lead Watertown to the state final four in lacrosse, served as a team captain for the Huskies this season.

She totaled 92 points, including 74 goals, in 53 career games at UConn, including 15 goals and an assist as a senior.

“The lacrosse program has been absolutely amazing,” she said of UConn. “Every single girl I have played with is like family to me and has shaped me to be who I am. Being captain this year has allowed me to connect deeper with the coaching staff and form a genuine bond that will definitely last a lifetime. We had a virtual graduation already but my class plans to go back in October to celebrate one last time!”

Several athletes from the north country had already decided to return for another year of lacrosse at the Division I level because of injuries.

South Jefferson graduate Morgan Alexander plans to take on another redshirt senior season at Syracuse University after she suffered yet another injury during team practice in February and underwent her fifth ACL surgery while at Syracuse.

Jackie Williams, a Carthage grad, is also planning on returning as a redshirt senior defender at the University of North Carolina next year after she missed both her sophomore and junior seasons after undergoing knee surgeries.

Many student athletes will take part in their graduation ceremonies virtually as they will be held online.

However, Hall and her fellow Le Moyne seniors may get the chance to experience that live at some point in the future, they hope.

But, she added, with the coronavirus pandemic still affecting the sports world, the outlook for the future remains unclear.

“Not to look at things negatively, but we don’t know what’s going to happen with next season,” Hall said. “Like the fall could be completely different and the spring as well, we just honestly have no idea. Which is a little bit scary, but ultimately I’m going back for my master’s (degree) and obviously lacrosse is just an added plus.”