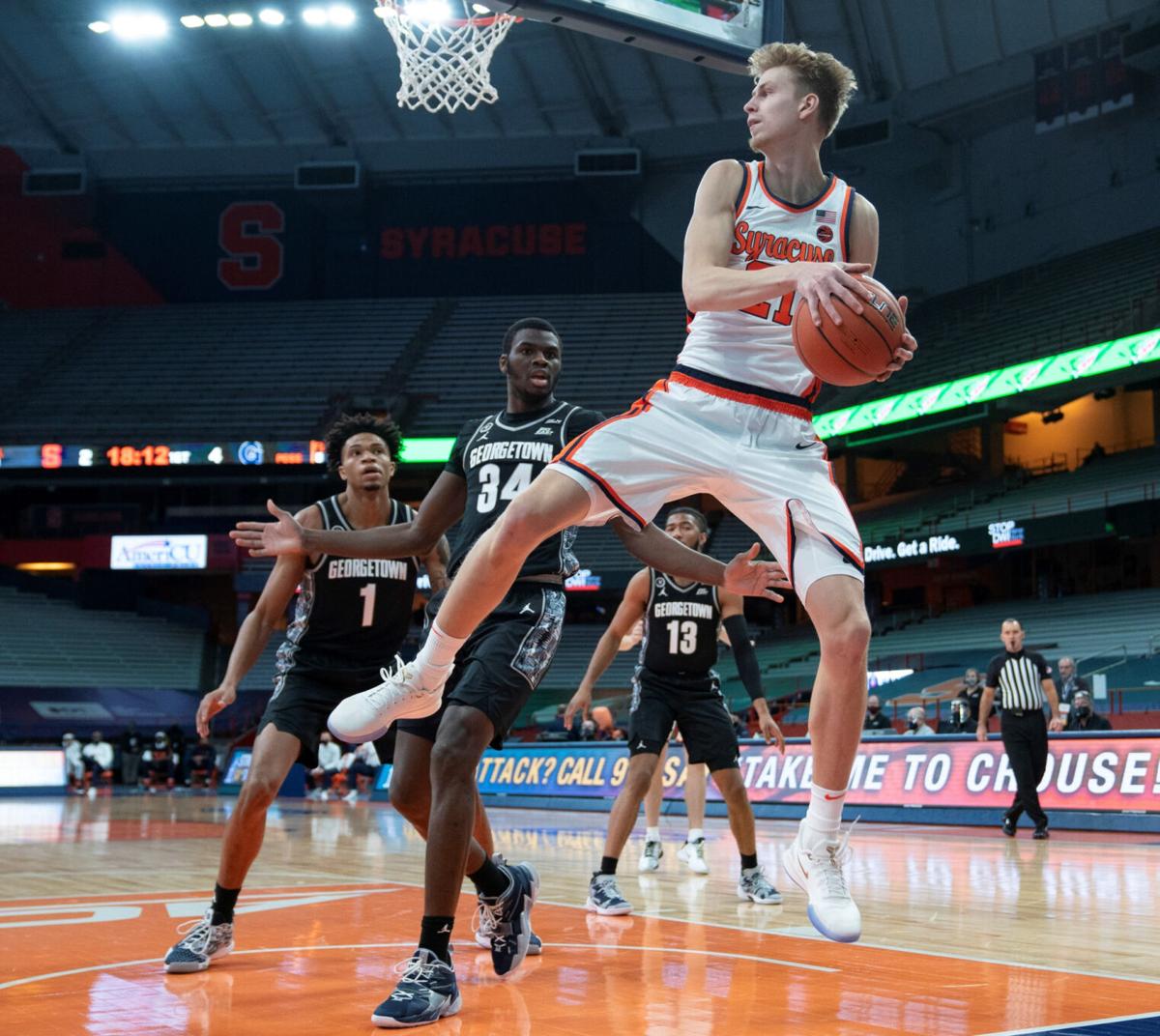 Syracuse’s Marek Dolezaj grabs a rebound during the first half against Georgetown on Saturday at Carrier Dome. Gregory Fisher/USA TODAY Sports 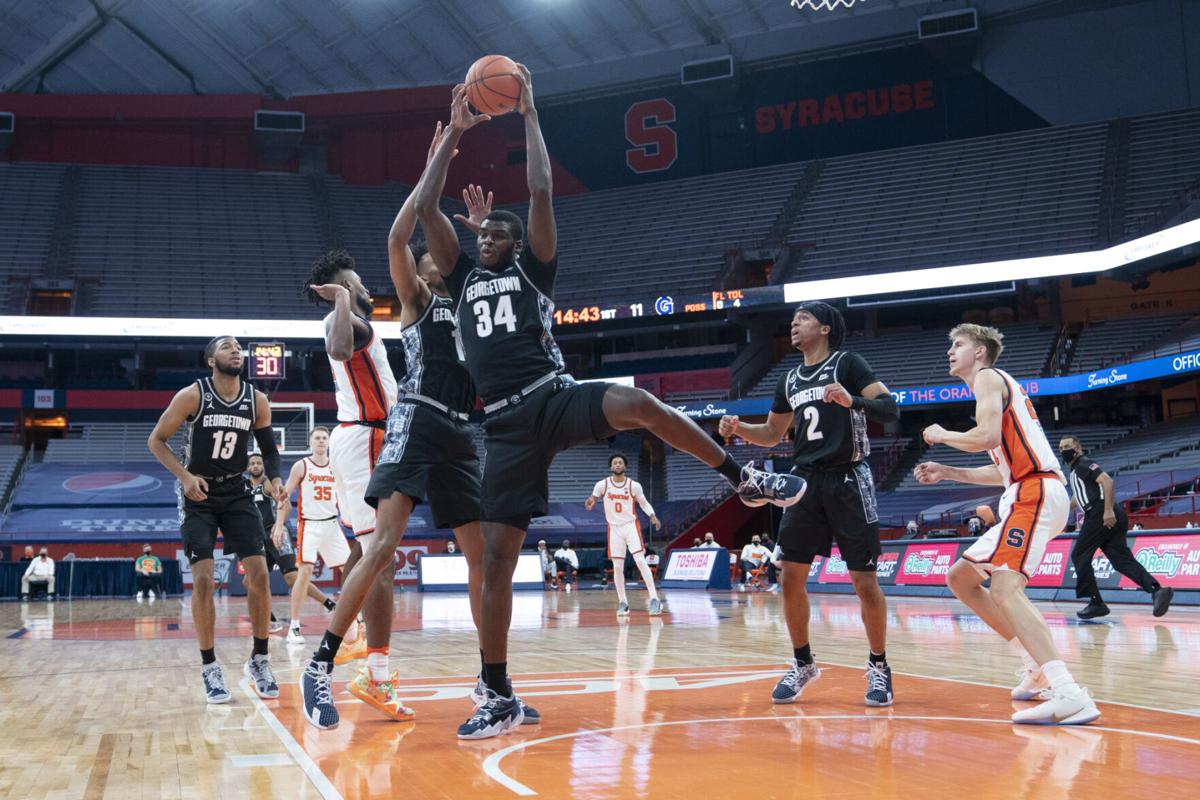 Georgetown’s Qudus Wahab grabs a rebound during the first half against Syracuse at the Carrier Dome. Gregory Fisher/USA TODAY Sports 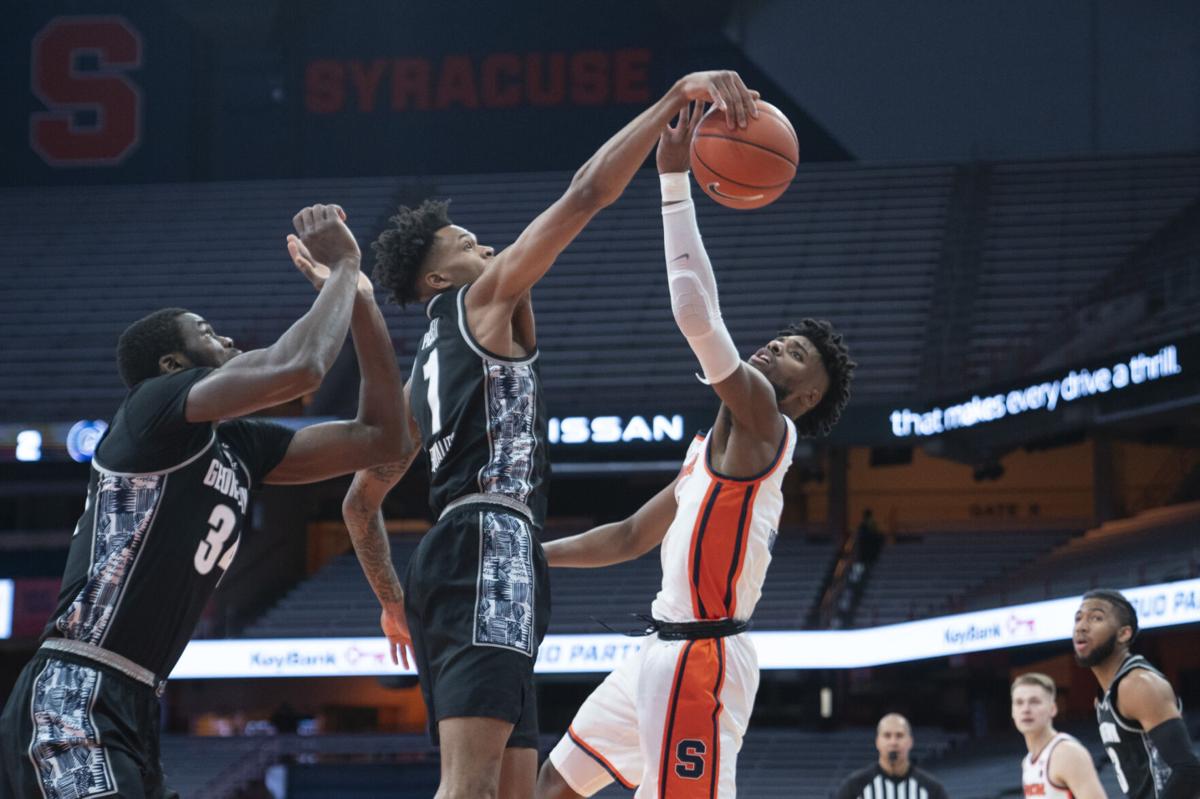 Syracuse’s Marek Dolezaj grabs a rebound during the first half against Georgetown on Saturday at Carrier Dome. Gregory Fisher/USA TODAY Sports

Georgetown’s Qudus Wahab grabs a rebound during the first half against Syracuse at the Carrier Dome. Gregory Fisher/USA TODAY Sports

SYRACUSE — Buddy Boeheim left his mark Saturday night on the rivalry he grew up closely admiring.

The junior shooting guard scored 13 of his game-high 21 points in the second half to lead the Syracuse University men’s basketball team to a 74-69 victory over Georgetown at the Carrier Dome to close out the nonconference slate, with no fans present due to state COVID-19 mandates.

Syracuse improved to 7-2 overall and will next play an Atlantic Coast Conference road game at 9 p.m. Tuesday at North Carolina.

The Orange took a 52-44 all-time edge after the 96th matchup in the always-anticipated annual series against the Hoyas that has endured despite the teams being aligned in different leagues since 2013-14.

“Being close with former players before me, Eric Devendorf and guys like that, just knowing how much this means to them and it means a lot to me as well, it’s a family thing,” Buddy Boeheim said afterward. “Just being able to come out and get a win, last year we came up short and we knew this would be a battle, but we pulled through for a great win.”

Syracuse head coach Jim Boeheim, who is in his 45th season at the helm, entered the court with a towel on his shoulder to pay homage to his former coaching counterpart in the spirited series, John Thompson, who died on Aug. 30 at age 78.

Thompson guided the Hoyas from 1972-99 and helped build SU-Georgetown into one of the most compelling rivalries in the sport, opposing Boeheim in the early days of the Big East Conference. Boeheim spoke of Thompson as a trailblazer and respected foe after the game.

“He was much more than a good basketball coach and we had an unbelievable rivalry, but you can come together,” Boeheim said. “I know it’s hard for that in this country, and we need to be able to see that. John and I saw that after a lot of strife. ... It was just a sign of respect for a great coach and a guy that had, I still think more influence on the game than any coach when you think of the totality of the game and life.”

Girard III and Boeheim finished a combined 6-for-10 on 3-point field goals and each member of the starting backcourt shot 50 percent or better from the field for the second time this year.

Buddy Boeheim finished 9-for-18 and his second-half scoring surge featured several timely buckets to help SU maintain its edge down the stretch. He drained a 3-pointer with five minutes left to extend SU’s advantage to 68-61 after Robert Braswell blocked a shot in transition on the other end to set it up.

Boeheim also scored to end a 7-0 Georgetown run earlier in the half and threw an alley-oop to Alan Griffin with 2:28 left to give SU a 70-65 edge. Girard III helped seal the victory with a pull-up jumper as the shot clock was set to expire to push the SU lead to 72-65 with 1:13 left.

Braswell also snagged three steals in the second half to go with his key blocked shot.

The Orange led at halftime, 43-30, after producing a pair of early double-digit scoring runs to jump ahead.

Girard III scored nine in the first half to lead a balanced attack featuring all five starters with at least seven points. The guard from Glens Falls converted on a four-point play to give the Orange a 25-24 edge with 6:38 left in the half.

Jahvon Blair scored 16 points and did his part to keep Georgetown (3-8) afloat early, scoring on a floater to end a 10-0 SU run midway through the first half. He then hit a contested pull-up from behind the 3-point arc with the shot clock expiring to put the Hoyas ahead, 23-21, before Girard III’s four-point play propelled SU to the strong close to the half.

Syracuse again played without senior center Bourama Sidibe due to soreness in his surgically-repaired left knee, and freshman center Frank Anselem has yet to be cleared for a return following the team pause for COVID-19 protocol. Jim Boeheim said afterward that he was hopeful both could be available for the next game Tuesday but was not certain.

Prior to the game, Georgetown players locked arms and kneeled during the playing of the national anthem.