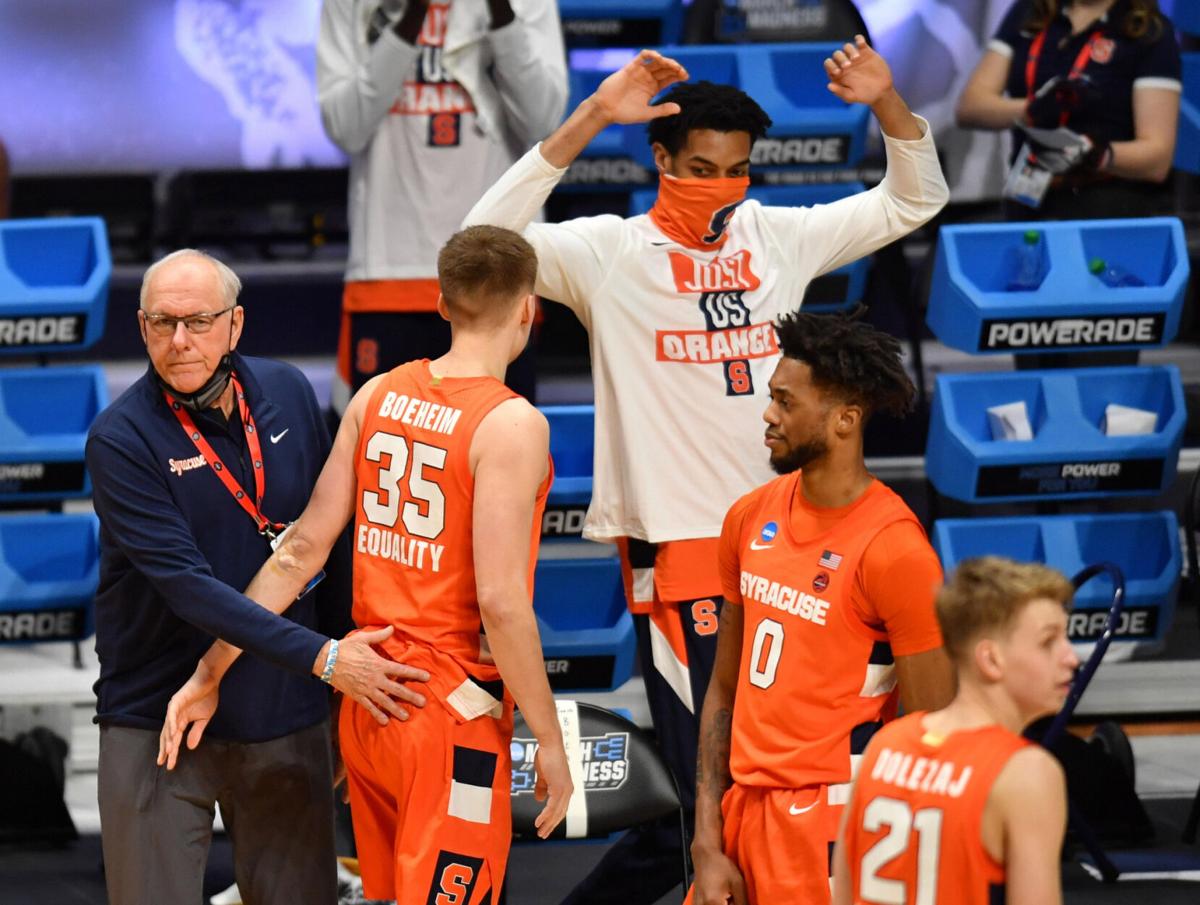 Syracuse guard Buddy Boeheim, center, is greeted by head coach Jim Boeheim, left, as he comes out of the game against San Diego State during the first round of the NCAA Tournament last Friday night in Indianapolis. Patrick Gorski/USA TODAY Sports 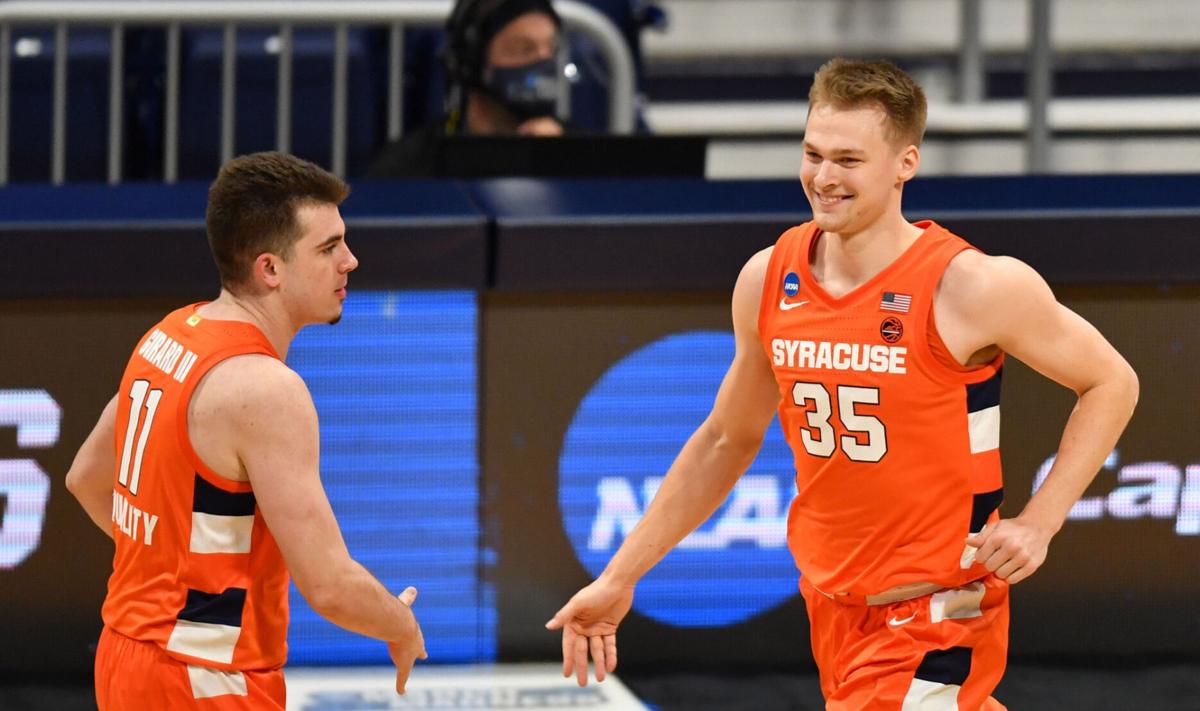 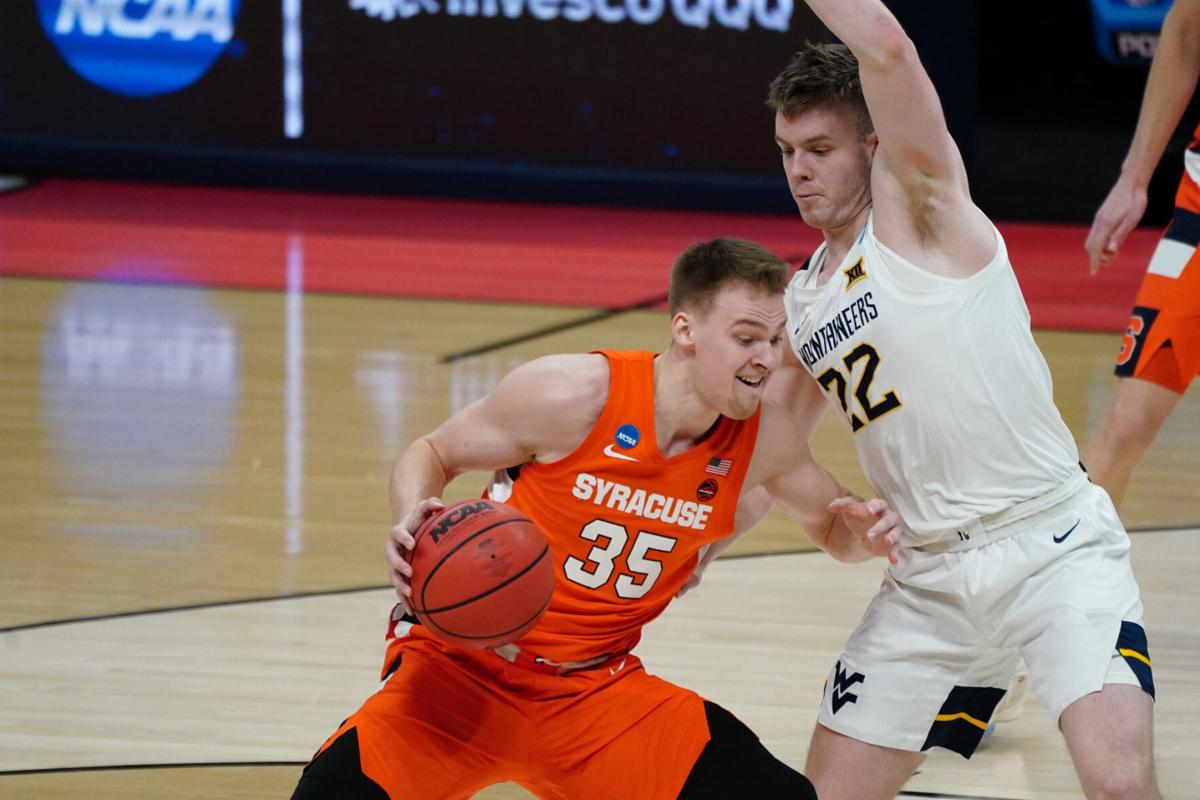 Syracuse guard Buddy Boeheim, left, looks to move down court while being defended by West Virginia guard Sean McNeil in the second round of the NCAA Tournament on Sunday. Kirby Lee/USA TODAY Sports

Syracuse guard Buddy Boeheim, center, is greeted by head coach Jim Boeheim, left, as he comes out of the game against San Diego State during the first round of the NCAA Tournament last Friday night in Indianapolis. Patrick Gorski/USA TODAY Sports

Syracuse guard Buddy Boeheim, left, looks to move down court while being defended by West Virginia guard Sean McNeil in the second round of the NCAA Tournament on Sunday. Kirby Lee/USA TODAY Sports

The world is gaining insight into the cherished father-son bond between Jim and Buddy Boeheim as they shine together on the big stage.

There is no Syracuse University men’s basketball supporter who has enjoyed watching it unfold more than their biggest fan, Juli Boeheim, soaking it in from the family home in DeWitt, where she first witnessed their unique partnership form during overnight bottle feedings.

Juli Boeheim — the wife of Hall of Fame coach, Jim Boeheim, and mother of SU’s star shooting guard — is hoping to travel to Indianapolis in time to watch the 11th-seeded Orange (18-9) face the No. 2 Houston Cougars (26-3) at 9:55 Saturday night in the Sweet 16 round to be televised on TBS.

“My heart as a mom, and a wife, is full and overflowing,” Juli Boeheim said during a Monday phone interview. “That is really all I can say. So much joy, times two, and really for all these guys. I love this whole team.”

Juli Boeheim watched SU win its first- and second-round Midwest Region games this past weekend to advance to the 20th Sweet 16 in her husband’s 45-year coaching tenure from home with their oldest son, Jimmy, and other family members. She opted against making the initial trip due to plans to receive the COVID-19 vaccine around the tournament start date.

Juli looked on in amazement as Buddy Boeheim poured in a combined 55 points in wins over sixth-seeded San Diego State and No. 3 West Virginia, connecting on 13 of 23 attempts from long range to set a team record for most 3-pointers through two NCAA Tournament games.

The advantage to watching Buddy’s national breakout on TV was the chance to see pregame show features and interview clips of the duo speaking to the significance of sharing the moment and shedding light on their close connection.

She thought back to Buddy being attached to his dad “from day one,” starting with the longtime coach waking up to feed his son with a bottle as Juli fed Buddy’s twin sister, Jamie.

The twins were born in November 1999, coinciding with a 19-0 start for Jim’s SU squad and a Sweet 16 berth later that season.

“As long as we were winning, Jim was willing and able to help me through the night,” Juli Boeheim joked. “When you’re winning, you can do just about anything, and he would have helped me anyway, but it was ideal that we went 19-0 when they were born.”

Juli Boeheim said that she noticed an instant affinity between Jim and Buddy at that time, which has blossomed further through the years.

“I’ll never forget, there we are sitting in bed feeding both of these babies, and the way Jim was with Buddy then,” Juli Boeheim said. “He had such a way with this little chubby ball of love, then Jim would put him on his shoulder and Buddy would just give him the best burp. I just wanted to watch them together back then.”

Buddy, who later got the nickname “Buddy Buckets,” always wanted to be near his dad during his childhood, according to Juli Boeheim, and shared his father’s favorite chair when they spent time in the living room.

The habit continued nearly into Buddy’s teen years, requiring the family to purchase a chair about 1½ times the standard size for a Christmas gift.

Buddy was also fascinated with numbers as a young child and used to tease his mom by making up various figures in the millions to measure his love for dad, and then gave a much lower number to rate his love for mom with what Juli described as a wink in his eye.

“He believed in me before I believed in myself,” Buddy Boeheim said of his dad following the first-round win over San Diego State last Friday night. “He’s always been my biggest motivator, my biggest supporter, and this means everything to me, it’s something that we’ll cherish forever. That’s my best friend.”

Jim Boeheim shares a unique bond with each of their three children, according to Juli. She spoke to the affectionate father-daughter relationship he shares with Jamie, and said he is wired the same as their oldest son, Jimmy, leading to colorful discussions about various aspects of the game.

With Buddy, that included lifting his confidence at times when the SU junior questioned his own abilities in his formative years on the court. Juli Boeheim recalled a slew of talks through the years where Jim Boeheim would encourage Buddy to churn through his most frustrated points.

“Buddy really held onto that and it motivated him to work,” Juli Boeheim said. “He believes what his dad says. Jim is a very honest guy, and if people don’t know that now, they’re not going to ever know that. So, everything Jim would say to Buddy, he would hang onto like gold.”

Juli Boeheim is eager to join the next chapter of the journey in-person but joked that she could get a last-minute order to stay home from her superstitious son aiming to extend his hot streak.

She is not allowed to stay with SU due to the NCAA safety protocol limiting to team personnel at hotels but still hopes to share in the Sweet 16 experience and offer support from a distance Saturday night at Hinkle Fieldhouse.

Juli missed being in attendance to start the tourney, which became a regularity this year due to the Carrier Dome not allowing spectators amid state coronavirus mandates. She is normally a constant at SU home games and waits to greet both Jim and Buddy near the locker room afterward.

“I would much rather be there just to show my support, but I think it’s going to be really difficult because I can’t be with them,” Juli Boeheim said. “I can’t see them, I can’t hug them, I can’t do anything, and I’m really struggling with that idea, but to be there is important.”