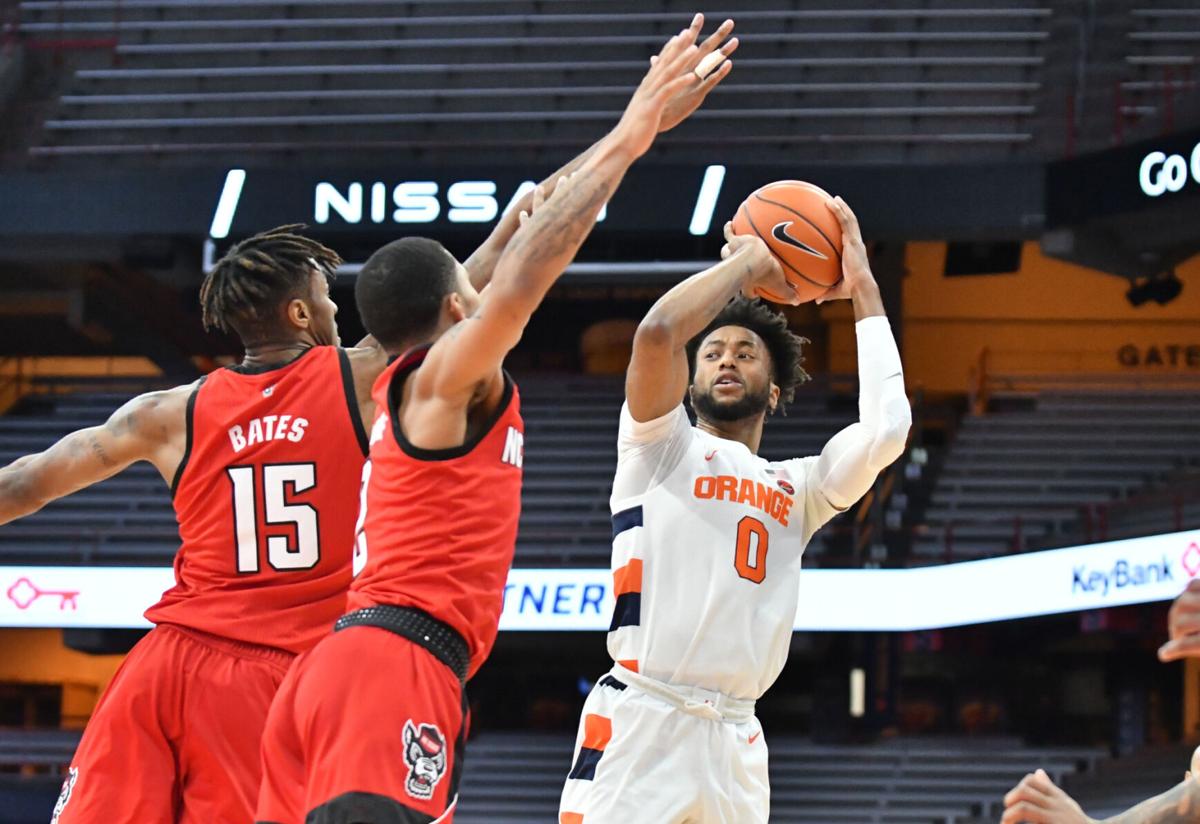 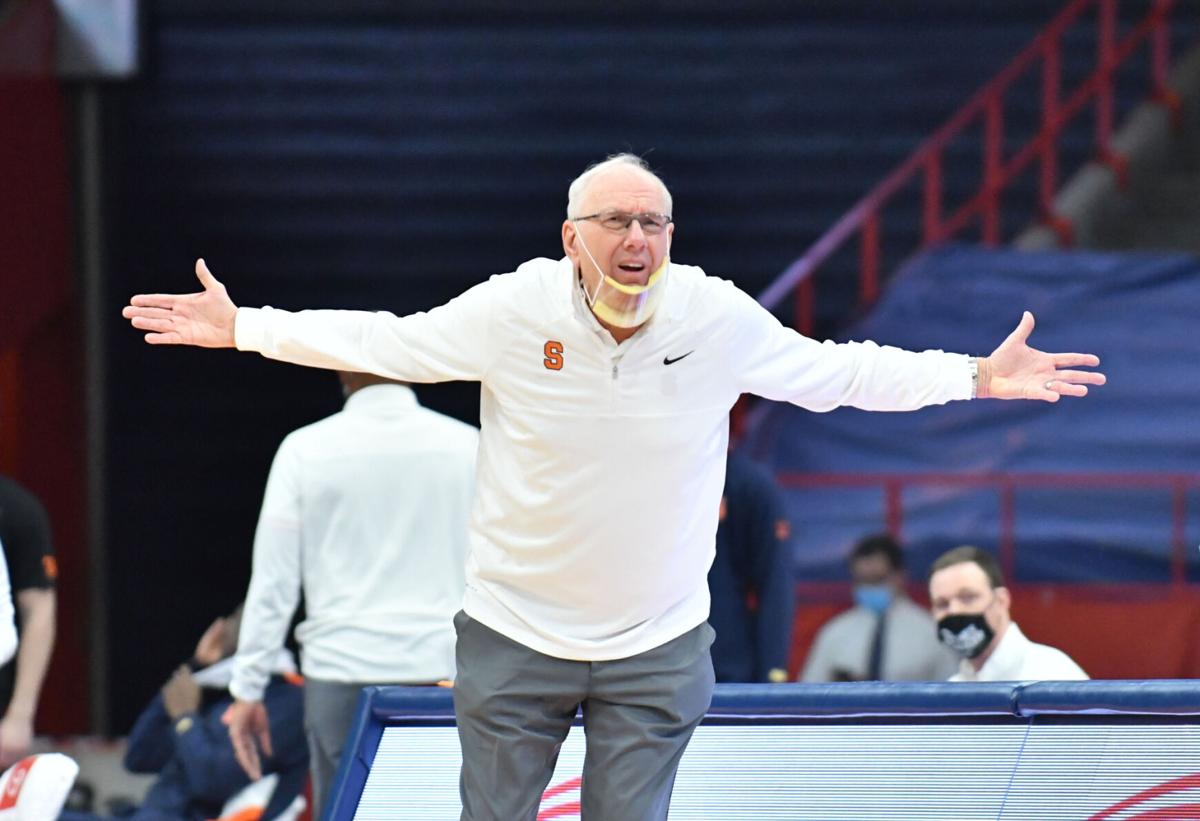 Syracuse Orange head coach Jim Boeheim reacts to a play in the second half against the North Carolina State Wolfpack Sunday at the Carrier Dome in Syracuse. Mark Konezny/USA TODAY Sports

Syracuse Orange head coach Jim Boeheim reacts to a play in the second half against the North Carolina State Wolfpack Sunday at the Carrier Dome in Syracuse. Mark Konezny/USA TODAY Sports

SYRACUSE — Kadary Richmond made the most of his limited minutes to help the Syracuse University men’s basketball team rally and escape with the Atlantic Coast Conference victory Sunday.

Richmond scored 14 points in just 16 minutes, slashing for crucial buckets down the stretch to help Syracuse beat North Carolina State, 76-73, at the Carrier Dome with no fans present due to state COVID-19 restrictions.

The Orange overcame a 47-38 halftime deficit with improved defensive play against the short-handed Wolfpack (7-6, 3-5).

Marek Dolezaj delivered 11 points, eight rebounds, six assists, and four steals for SU. Quincy Guerrier scored eight of his 10 points in the second half and added 10 rebounds for his ACC-leading seventh double-double.

Dolezaj sank a pair of free throws to extend SU’s edge to 74-70 with 17 seconds left. Guerrier then fouled N.C. State guard Thomas Allen attempting a 3-pointer, and he sank each shot from the foul line to cut the deficit to 74-73 with six seconds left.

But Griffin made another pair for SU on the ensuing possession to push the advantage back to 76-73, and Cam Hayes’ potential game-tying shot from deep hit the side of the backboard at the buzzer.

“We’ve seen teams open that lead up early, they get a couple 3s on us and we’re down 15 and trying to fight back and crawl back, press and whatever it is,” Buddy Boeheim said. “But this game we started the second half with a couple easy buckets inside and we knew it was all defense at that point. … We just got to battle, play together and communicate, and we did a great job of that in the second half.”

Richmond helped position the SU veterans to close the victory after accounting for 10 of the final 11 points in the first half.

The freshman point guard delivered again off the bench in the second half. He spun through a pair of defenders and scored inside to give SU a 72-69 edge with 1:17 left and hit a pair of go-ahead buckets during the final 10 minutes.

Richmond backed his way into the paint for a turnaround to give SU a 67-65 lead with five minutes left and challenged the ACC’s leading shot blocker — North Carolina State’s Manny Bates — to draw goaltending and put SU ahead, 62-61, with 7:43 left.

“He was great, at the end of the first half, he kept us reasonably close, without him we would have been down 15 and it would have been a hard climb back,” SU coach Jim Boeheim said. “(Richmond) can get to the basket, he’s good defensively and helps us on the boards.”

North Carolina State missed all eight 3-point attempts and was held to 26 points on 32.2 percent shooting in the second half, compared to a 56.7 field-goal percentage mark before the break, including 6-for-15 from deep.

“We just played better defense (in the second half),” Jim Boeheim said. “Any defense you play is only as good as the players in it, and we played the same defense in each half.”

Syracuse center Bourama Sidibe went through full team warmups for the first time since suffering a torn meniscus in his left knee during the season opener Nov. 27 but did not play in the game. Boeheim said afterward that he was hopeful of a possible return for the 6-foot-10 senior on Wednesday.

The Wolfpack played its first game without leading scorer Devon Daniels due to a torn ACL and ruled out its next-leading scorer, D.J. Funderburk, prior to tip-off due to unspecified “university policies.”

Daniels and Funderburk have combined to average 26.6 points per game this season.