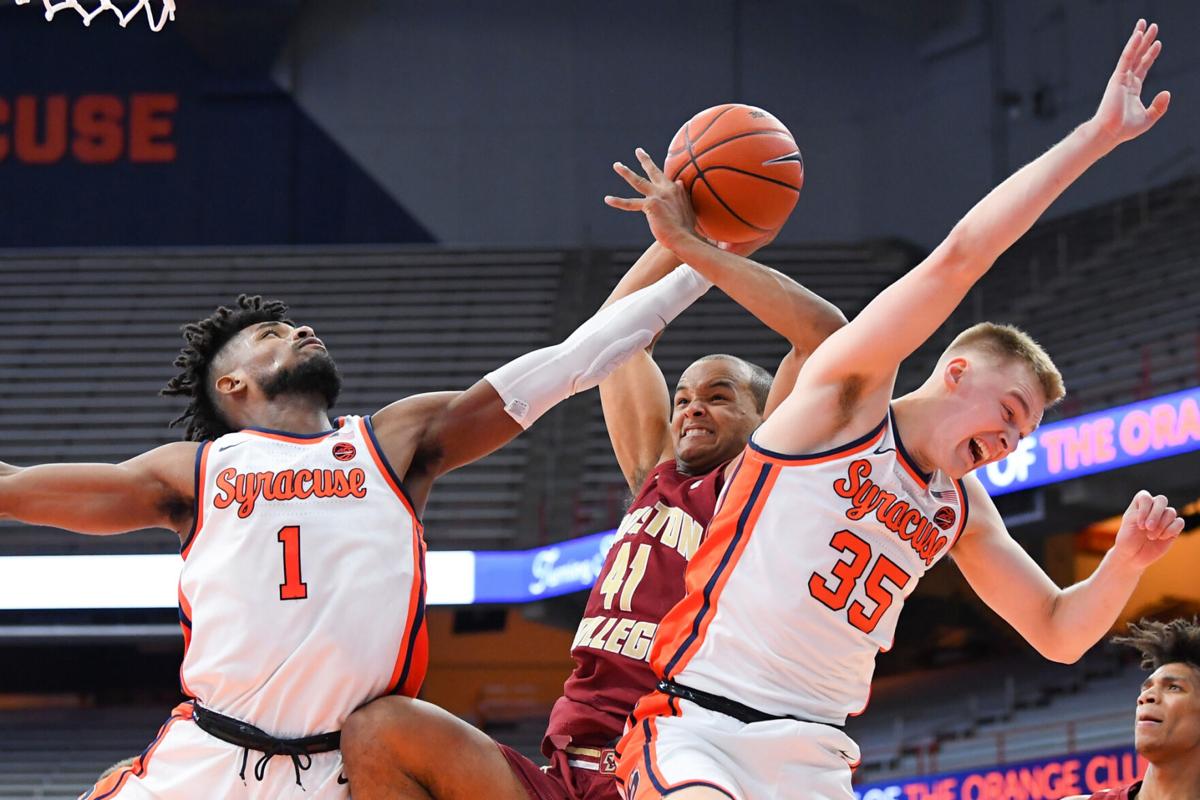 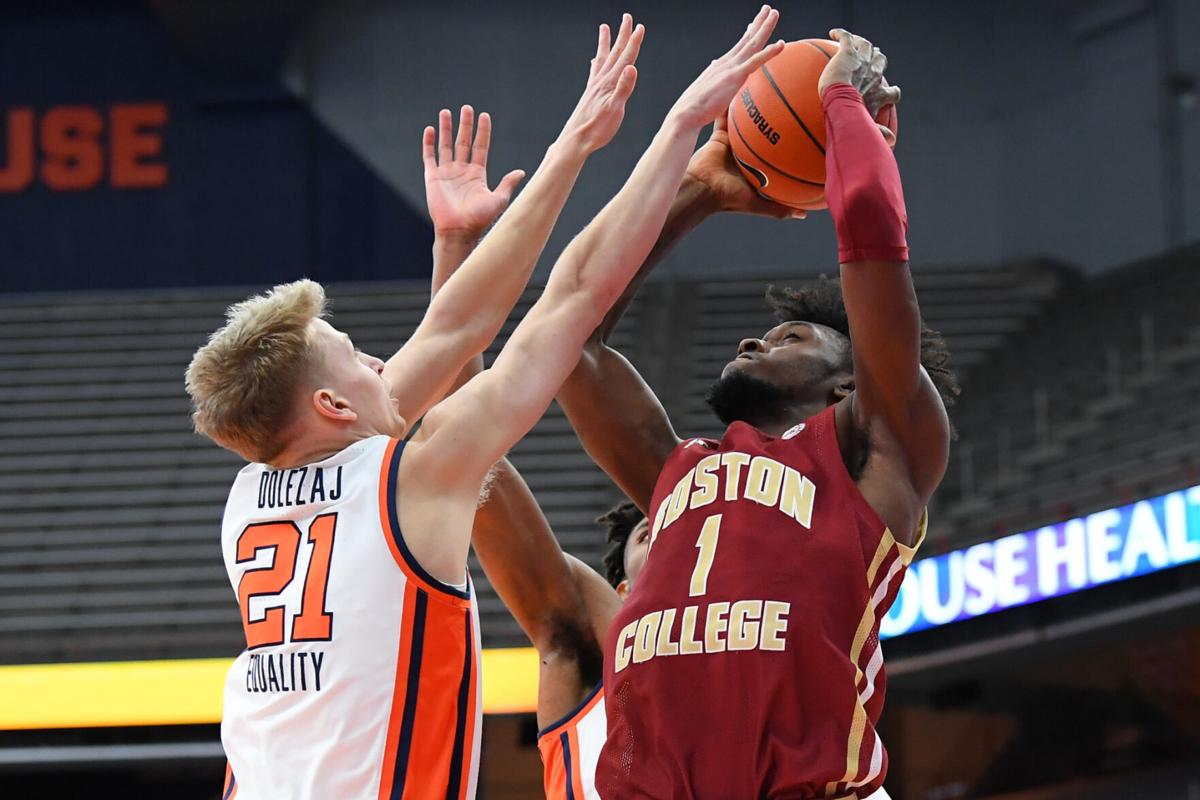 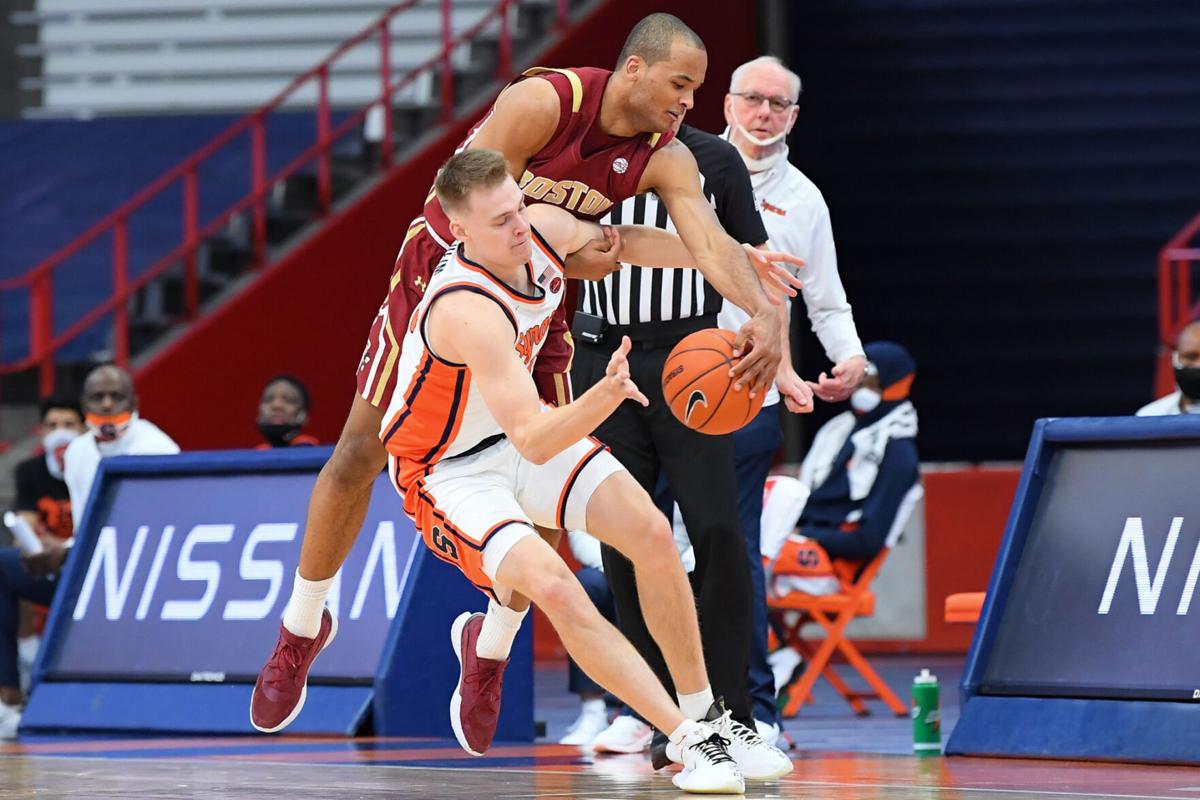 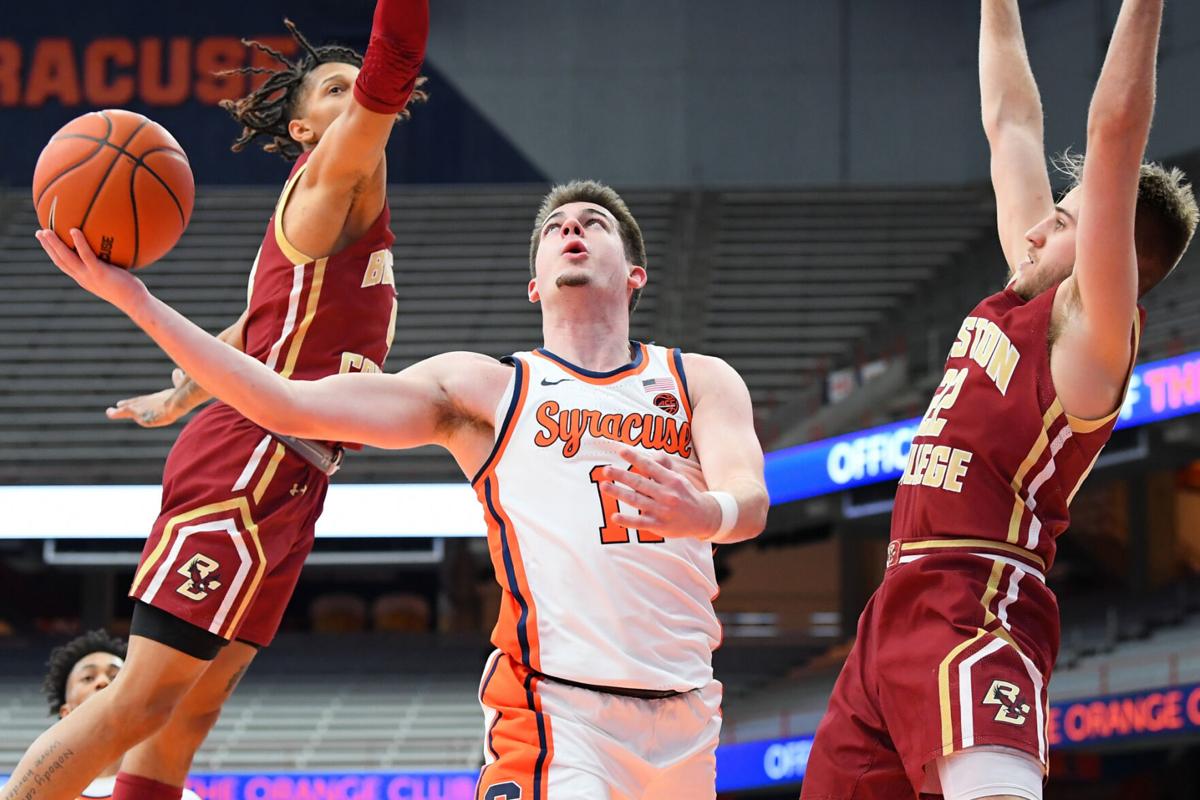 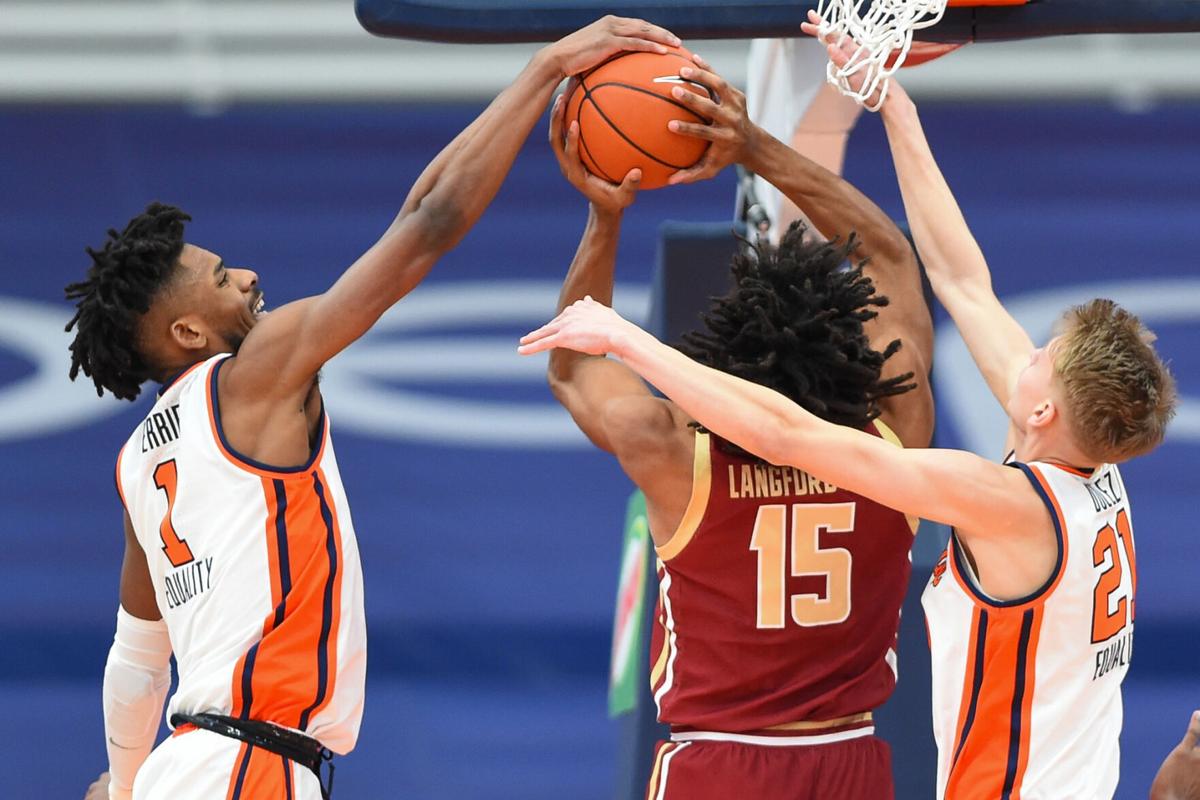 SYRACUSE — The Syracuse University men’s basketball team relied on its record-pace free throw prowess to hold off Boston College on Saturday afternoon at the Carrier Dome.

The Orange made 13 straight foul shots over the final five minutes and 14 seconds to close out a 75-67 Atlantic Coast Conference victory over the short-handed Eagles. No fans were present due to state COVID-19 mandates barring spectators until at least Feb. 23.

Joseph Girard III scored all his 16 points in the first half to lead five players in double figures and spark Syracuse (12-6 overall, 6-5 ACC), which led for 38 minutes to complete the season sweep of Boston College (3-13, 1-9).

Syracuse is next scheduled to play at 6:30 p.m. Wednesday at Louisville in a league game to be televised on the ACC Network.

“You’re going to get into games where you’ve got to find a way to get through them, somehow, you’ve just got to find a way,” SU coach Jim Boeheim said afterward. “We made our free throws coming down the stretch and we got the ball to the basket and made some plays there.”

Alan Griffin scored 14 points for SU while Marek Dolezaj and Buddy Boeheim each added 13, and Quincy Guerrier finished with 12.

The Orange relentlessly attacked the rim down the stretch to score its final 13 points from the foul line — Dolezaj made six, Guerrier sank five and Griffin added a pair during the game-sealing sequence. Guerrier started the streak by hitting the back end of a one-and-one to give SU a 63-57 advantage with 5:14 left.

Syracuse entered the game with a team mark of 79 percent on free throws, which is on pace to top the program record of 75.1 established in 1983-84.

“That’s a strength of our team and we need to drive and get to the foul line,” Boeheim said. “There have been a couple games, we tried that at Clemson, and they didn’t call anything, we didn’t shoot any free throws. So, that’s what we’re trying to do, we want to get to the basket and try to get some of those.”

Girard III made 7 of 9 attempts in the first half, including a pair of 3-pointers, and scored 10 straight during a stretch for SU that included a 7-0 solo run to extend its advantage to 38-30 with 4:40 left in the half. He added six rebounds, three assists, and three steals in 36 minutes overall.

Boeheim said that Girard III carried SU’s scoring in the first half before wisely helping facilitate the aggressive inside approach after the break.

“My shots were there in the first half and in the second, it wasn’t about me going to score, other opportunities were there for us to score inside and that’s what we took advantage of,” Girard III said. “It’s been like that all year, teams are going to have to go and defend inside a little more against us, and we have good enough shooters where if we get going outside, obviously the defenses are going to change and try to push up.”

Syracuse finished with a 30-23 edge in rebounds, led by nine from Guerrier, and held a 38-20 advantage in points in the paint. The Orange is 11-0 when it wins the rebounding margin and improved to 10-1 in the Dome.

Rich Kelly scored 14 points, including 4-for-12 from deep, while Stefon Mitchell and Jay Heath added 12 apiece for Boston College, which played with just seven scholarship players due to COVID-19 protocol.

The Eagles were without their second-leading scorer, Wynston Tabbs, who averages 13.3 points per game. Boston College has yet to play at full strength in its three games since returning from a program pause that resulted in five January postponements.

Both teams were assessed a pair of technical fouls for an altercation near the end of the first half.

Griffin and Heath appeared to get tangled during a dead ball, leading to players from both teams stepping in with no further incident. Syracuse reserve center, John Bol Ajak, and Boston College forward, C.J. Felder, stood face to face during the altercation, resulting in technical fouls for all four primary players involved.

“That was foolish, you’ve got to walk away,” Boeheim said. “We should have had a technical and that should have been the end of it, and Alan and John engaged in that instead of walking away, and that was a mistake, and they’ll have to learn from it.”