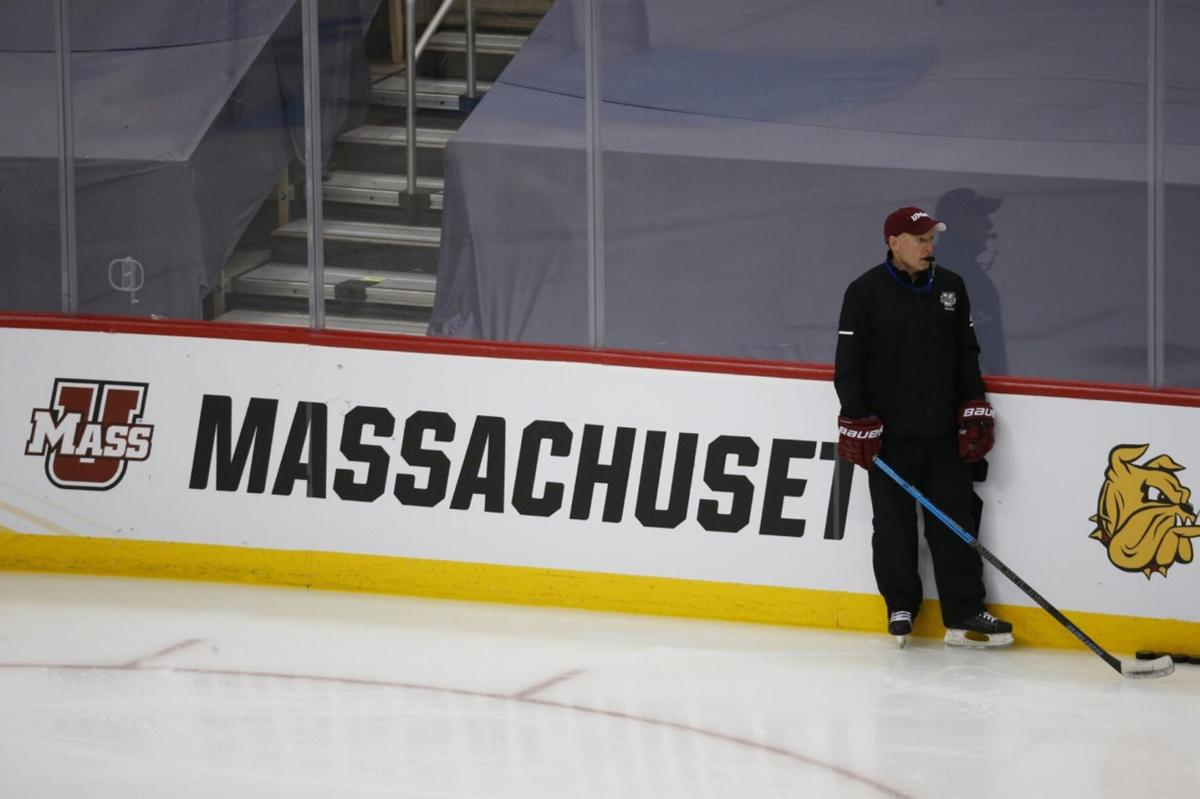 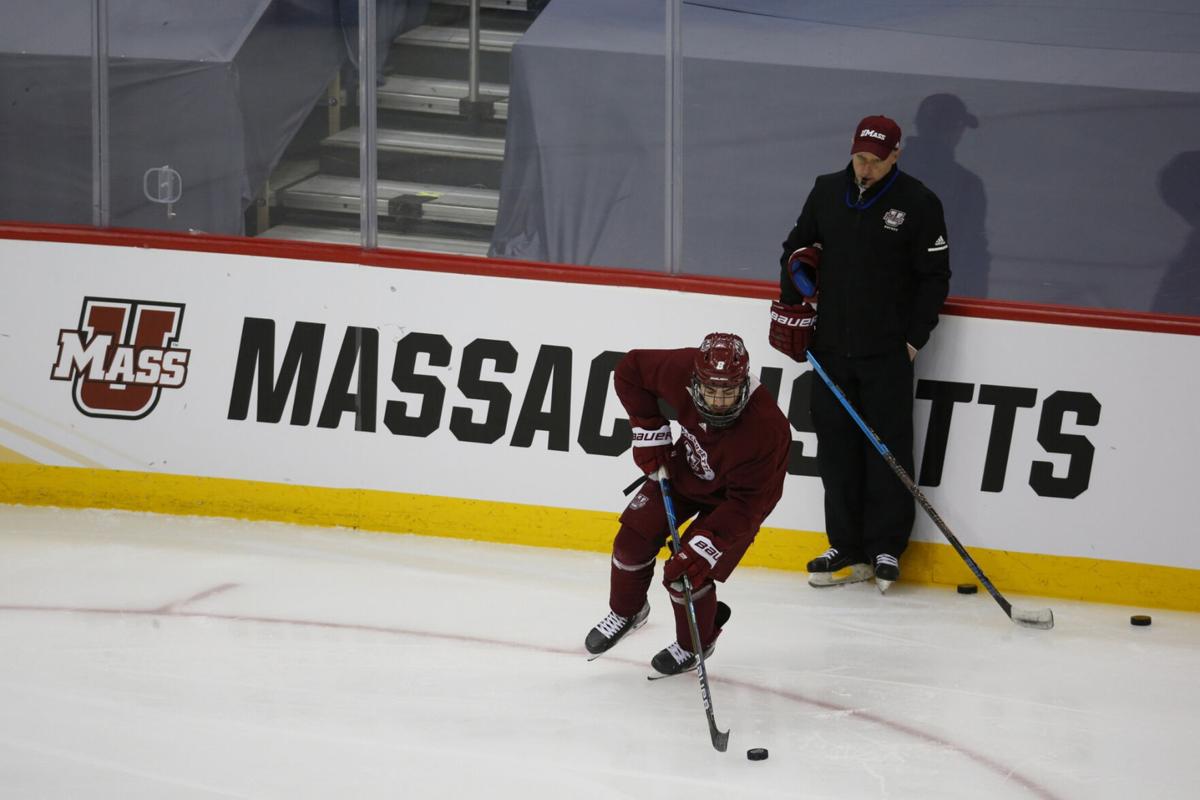 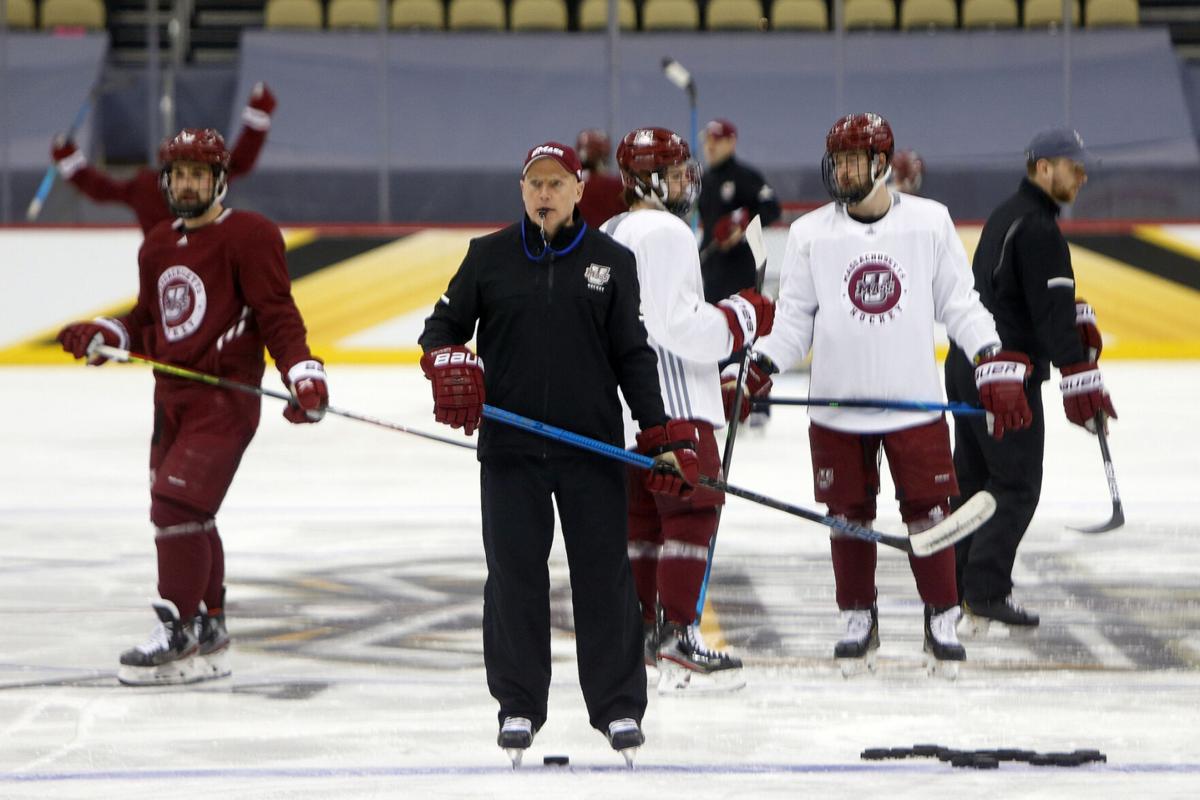 It’s obvious that Canton native Greg Carvel feels bad for his four University of Massachusetts men’s hockey players who did not get to make the trip to Pittsburgh for today’s 9 p.m. Frozen Four game in Pittsburgh, against two-time defending national champion Minnesota-Duluth.

But listening to Carvel’s press conference on Wednesday afternoon gave the feeling that part of him is a little excited to see how his team handles the situation.

The Minutemen lost their leading goal-scorer, St. Lawrence University transfer Carson Gicewicz, as well as standout goalie Filip Lindberg, third-string goalie Henry Graham and forward Jerry Harding after one of the four players tested positive for COVID-19 last Friday. The other three were close contacts so they will miss tonight’s game as well.

“We really work on the mental part of the game with our players for these exact situations, where we have a little adversity,” Carvel said. “We can lose a handful of guys and be all right, we can’t lose much more than that. The mental toughness is huge. I’m excited about that for (tonight). I want to see how this group handles it. We work a lot on the mental part of the game, and these are the times when you see if you are making progress. I think we’ll be ready to play. We weren’t mentally tough two years ago. We were super happy to beat Denver and we weren’t ready for what came at us. Hopefully we’ll be ready (tonight).”

The Minutemen (18-5-4 overall) are in the Frozen Four for a second straight time. Last year’s tournament was canceled due to COVID-19. But two years ago UMass reached the championship game only to lose 3-0 to Minnesota-Duluth, which is 15-10-2 this season.

“It will be fun to play Duluth again and see where we are at two years later,” Carvel said. “They still are the standard-bearer. I know people are thinking we are shorthanded. We lost a couple good players for this game, but that’s all right. We like our depth. The next guys will step in and carry on and play the way that we want them to play.”

Carvel said the team was informed immediately when the test results came back Friday night.

“That’s given us enough time to digest it and move past it,” Carvel said. “I feel badly for the kids in quarantine. Three of them have tested (negative) all week long. Its tough to stomach that they don’t have the disease and yet they still can’t play. We understand that’s the rules. It’s just another obstacle. This has been a tough year and every team has had to deal with obstacles along the way. The kids have really sacrificed all year and done a great job. It’s the only positive test we’ve had all year.”

Lindberg had been UMass’ main goalie the second half of the season and led the nation with a .946 save percentage.

But Matt Murray, who will be playing now, was the starting goalie in the first half of the season and has outdone even well-known alum Jonathan Quick in the school record books.

“I hate to call him a backup goalie because he owns the record for most wins and shutouts in our program history,” Carvel said. “I’m not concerned about the goaltending. I’m concerned about the team in front of him and hopefully he has an easy night because the team in front of him plays well. If we have to rely on our goaltender to make a lot of saves, then we won’t win the game. We are very fortunate we have two strong goalies.”