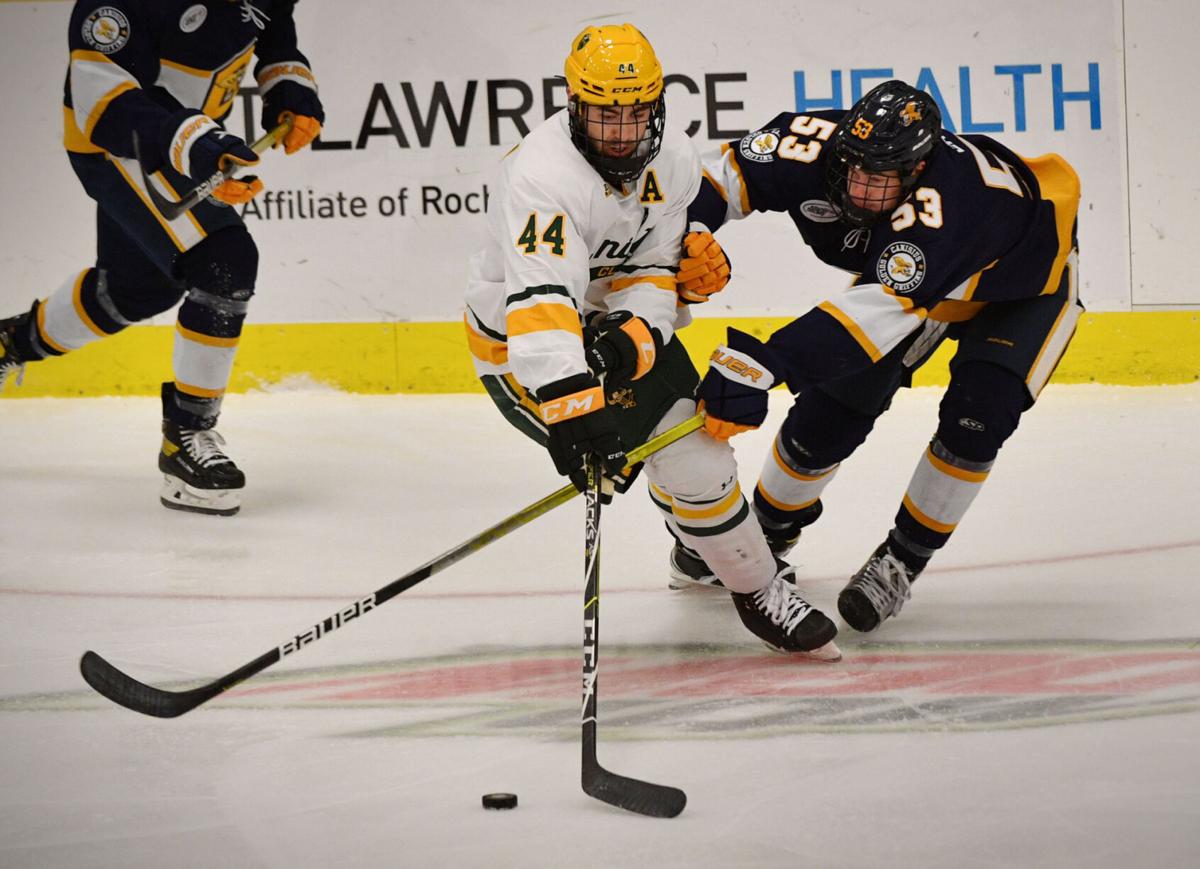 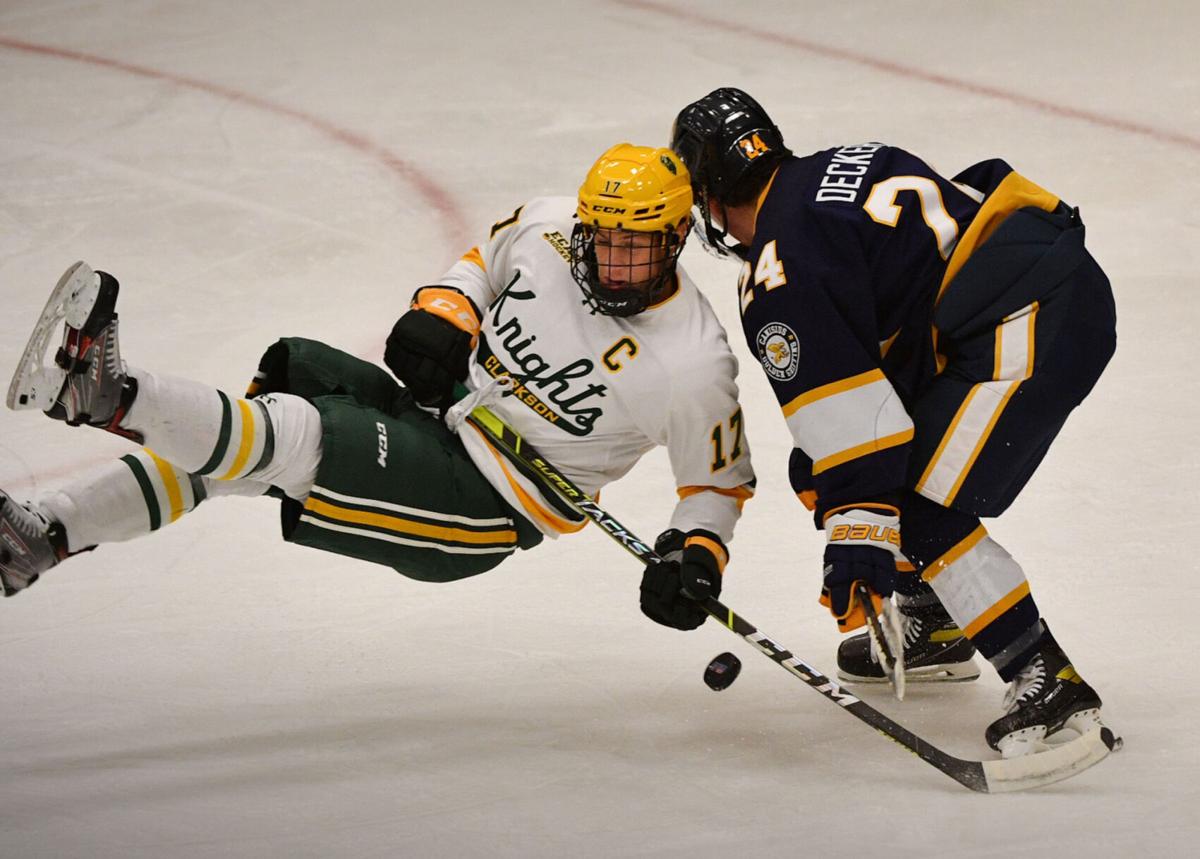 Clarkson’s Zach Tsekos falls to the ice as he is hit from behind by Canisius’ Jackson Decker during the first period Tuesday. Christopher Lenney/Watertown Daily Times 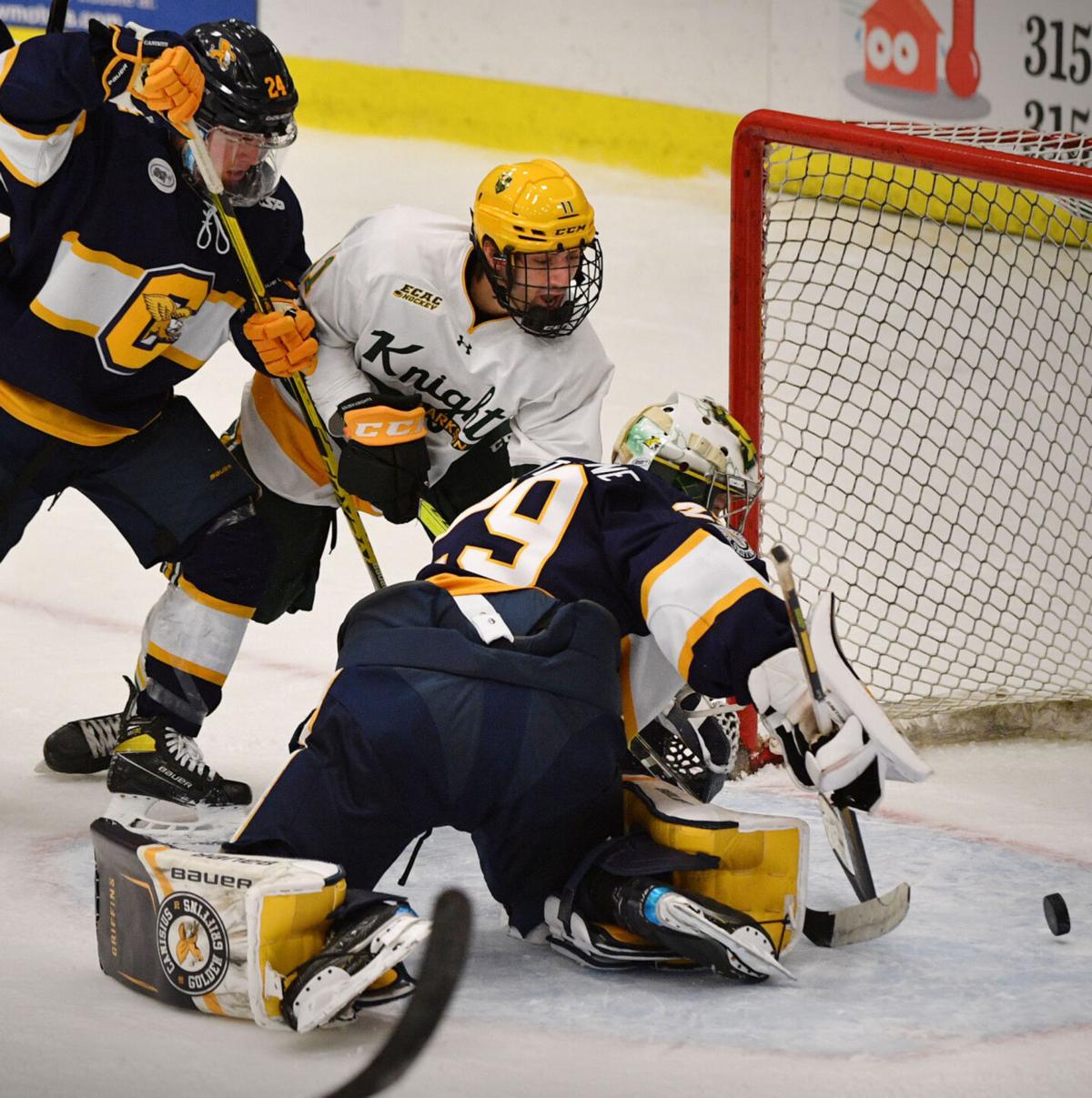 Clarkson’s Alex Campbell tries to get a stick on puck as it rolls behind Canisius goalie John Hawthorne as Jackson Decker follows the play during Tuesday’s game. Christopher Lenney/Watertown Daily Times 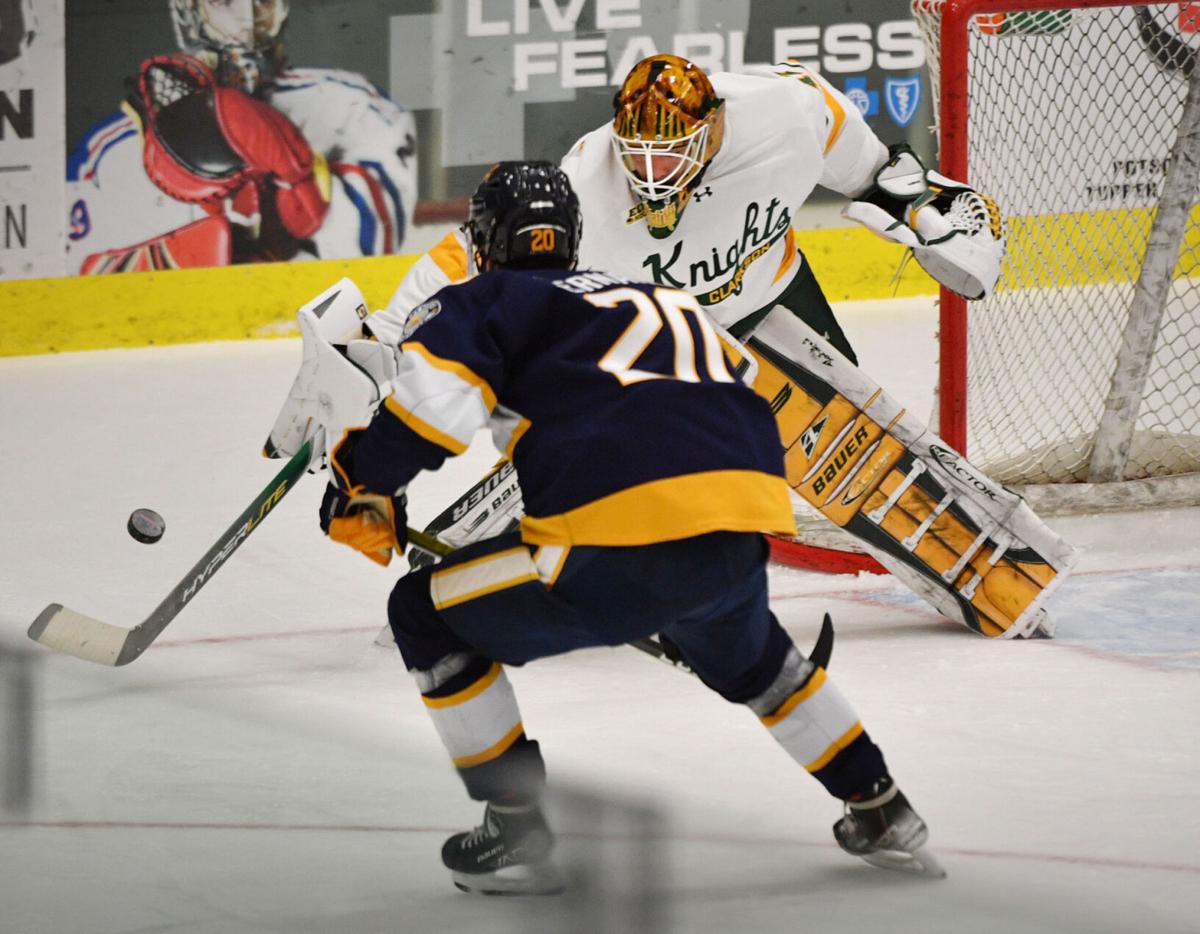 Clarkson goalie Ethan Haider comes out of the net to make a save as Canisius’ Randy Hernandez follows the play during an Oct. 19 game. Christopher Lenney/Watertown Daily Times 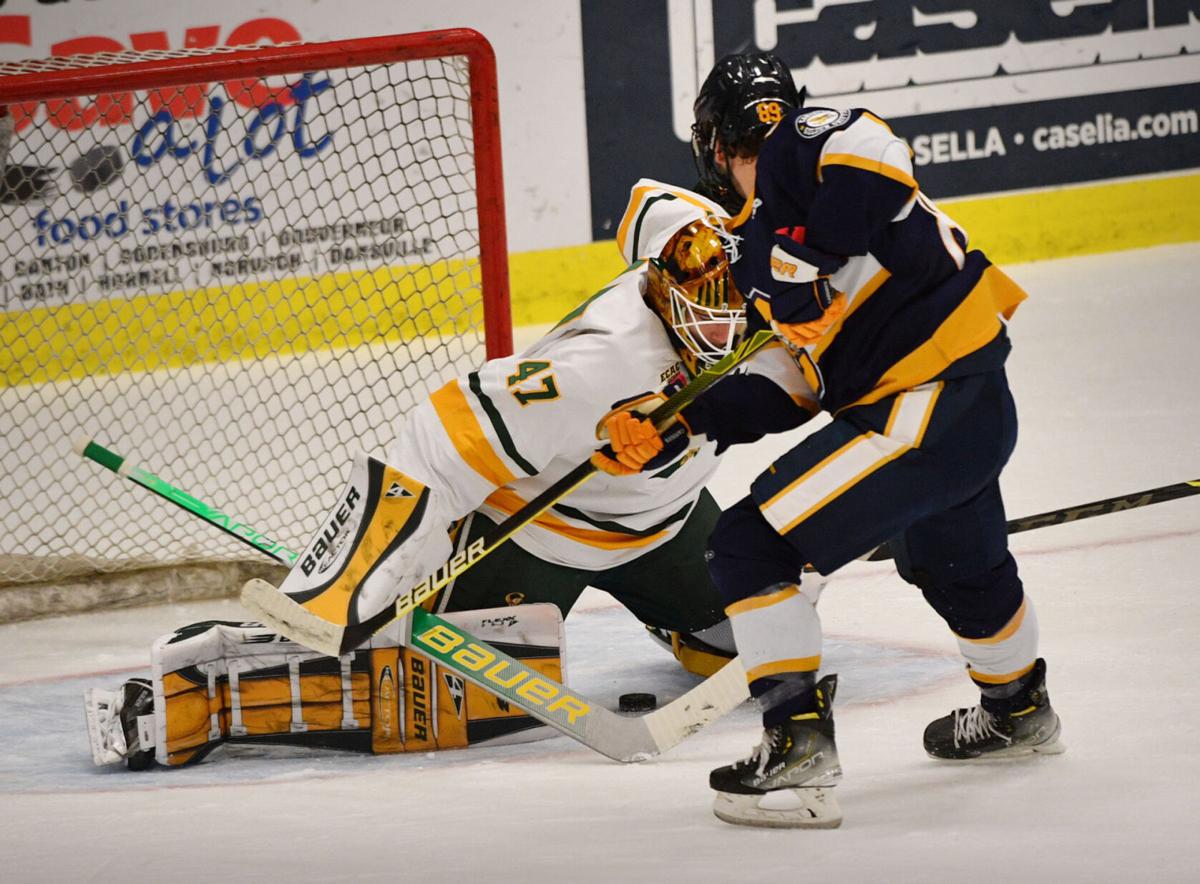 Clarkson’s Zach Tsekos falls to the ice as he is hit from behind by Canisius’ Jackson Decker during the first period Tuesday. Christopher Lenney/Watertown Daily Times

Clarkson’s Alex Campbell tries to get a stick on puck as it rolls behind Canisius goalie John Hawthorne as Jackson Decker follows the play during Tuesday’s game. Christopher Lenney/Watertown Daily Times

Clarkson goalie Ethan Haider comes out of the net to make a save as Canisius’ Randy Hernandez follows the play during an Oct. 19 game. Christopher Lenney/Watertown Daily Times

POTSDAM — Clarkson’s men’s hockey home opener yielded some good and some bad and both the Golden Knights and Canisius left frustrated after skating to a 4-4 tie before 2,030 fans in a nonconference game Tuesday night at Cheel Arena.

Canisius (2-2-1) came back to tie the game 3-3 by the end of the second period and led 4-3 in the third until Clarkson rallied with a late power-play goal to tie the game.

The faceoff violation is a point of emphasis for officials this season and the Golden Griffins were hit for a penalty during a faceoff on Lee Lapid at 18 minutes, 18 seconds of the third.

Clarkson coach Casey Jones pulled goalie Ethan Haider to give the Golden Knights a six-on-four advantage during the power play.

Lukas Kaelble, a graduate transfer from Lake Superior State, took a shot that rang off the post and Clarkson co-captain Zach Tsekos was right by the crease to put in the rebound with 51 seconds left.

“Once you are up 3-0 and you see the result at the end of the game, obviously you are a little disappointed,” Tsekos said. “At the other end, being down 4-3 at the end we scratched out a (tie), there is something to that. (Kaelble) saw a lane, got a great shot off and kind of hit that post.”

The game went to the three-on-three overtime format, which was implemented last year, and Clarkson dominated the extra period, keeping possession of the puck until there was 51 seconds left. The Golden Knights got only two shots on goal in the extra period, but Canisius had none.

“We definitely dictated,” Tsekos said of overtime. “Three-on-three is just an entirely different game. We had a lot of possession and got a couple chances. With the amount of possession we had, I thought we could have done a little more with it.”

Clarkson took a quick lead in the game with another goal from Tsekos just 1:49 into the contest. Tsekos was near the crease again and Anthony Romano send him a quick pass, giving him a shot in an open corner.

The Golden Knights thought they had taken a 2-0 lead during a power play at 3:36 of the opening period. Kaelble took a slap shot that hit the post, then fell into the net.

An official’s arm was up, signaling a penalty, but since the puck went in the net Kaelble thought that Clarkson would be up 2-0 and extending the power-play to a two-man advantage.

But the official actually signaled a penalty shot instead, which Kaelble, a defenseman, did not put in the net. Kaelble, who scored seven goals in four years at Lake Superior State, now has picked up two at Clarkson in three games and led the team with eight shots.

“I’m trying to get more pucks to the net and come in with a shooting mentality,” Kaelble said. “I think my freshman year I had two (penalty shots) early on and then this one.”

Clarkson upped the lead to two goals as Jordan Power scored off passes from George Grannis and Michael Underwood at 10:08 of the first period.

Kaelble did get a goal a little less than three minutes later, scoring on a power-play at 12:56 with Ayrton Martino and Romano assisting.

“We could have been ahead significantly in the first period,” Jones said. “There were a couple quick whistles. It is what it is there. I thought our style of play, and our pace of play and the simplistic aspect of our play, was kind of where it has to be in the first period. I give them credit, they fought back. As the game went along we didn’t stay above pucks, we didn’t get pucks deep. It’s a simple hockey game.”

Canisius began its comeback with a goal from Simon Gravel at 16:21 of the first period.

Jake Witkowski scored at 7:59 and Lapid tied the game at 15:59 of the second period.

The Golden Griffins took a 4-3 lead just 72 seconds into the third period on a goal from Ryan Miotto.

“It felt like we were battling a lot of adversity early in the first,” said Canisius coach Trevor Large. “We talked in the first intermission and it gave us a time to re-set. We got emotional (in the first). We were not strategic at all. We did respond and got some momentum. We didn’t get what we came here for, but we learned a lot of valuable lessons.”