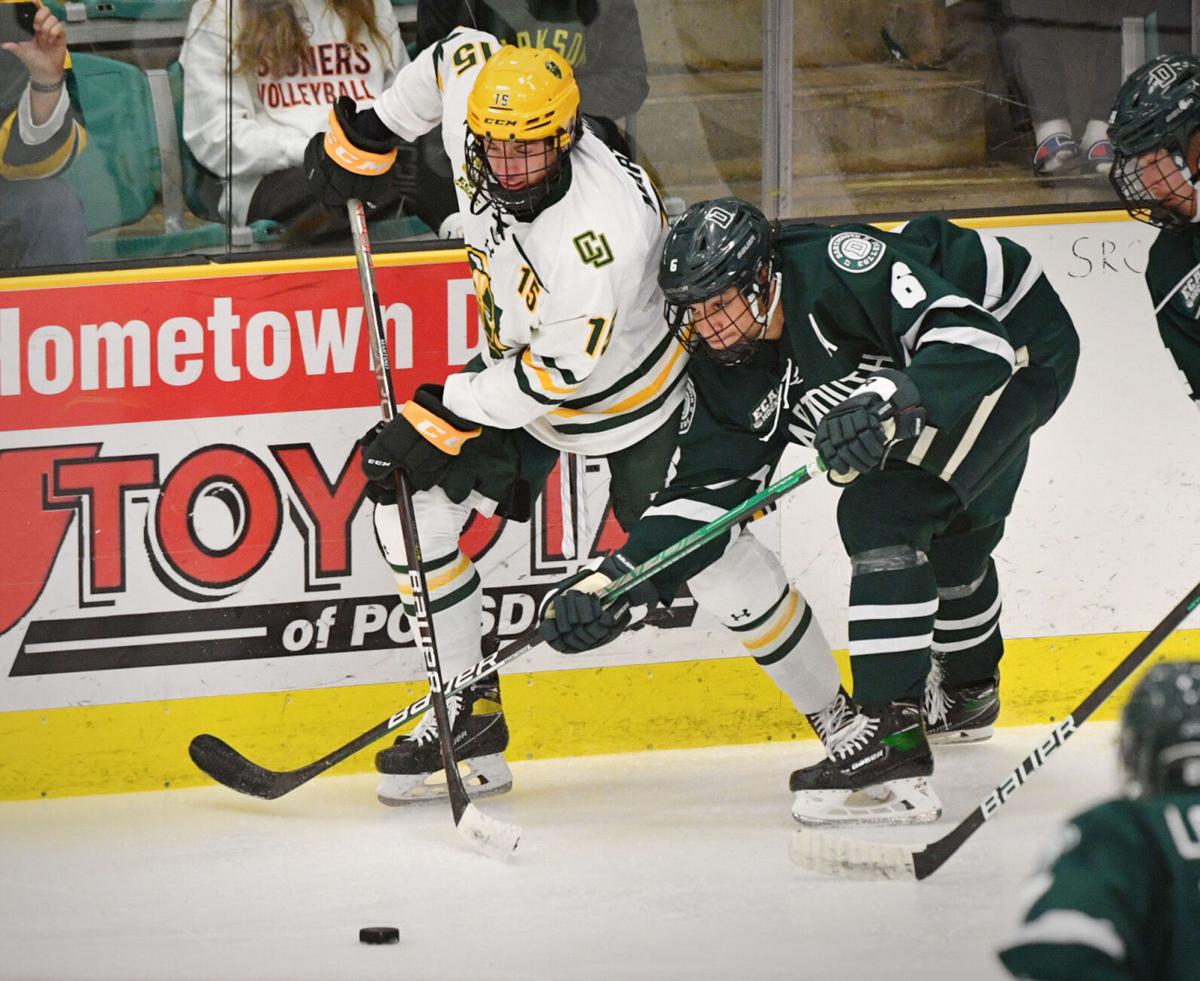 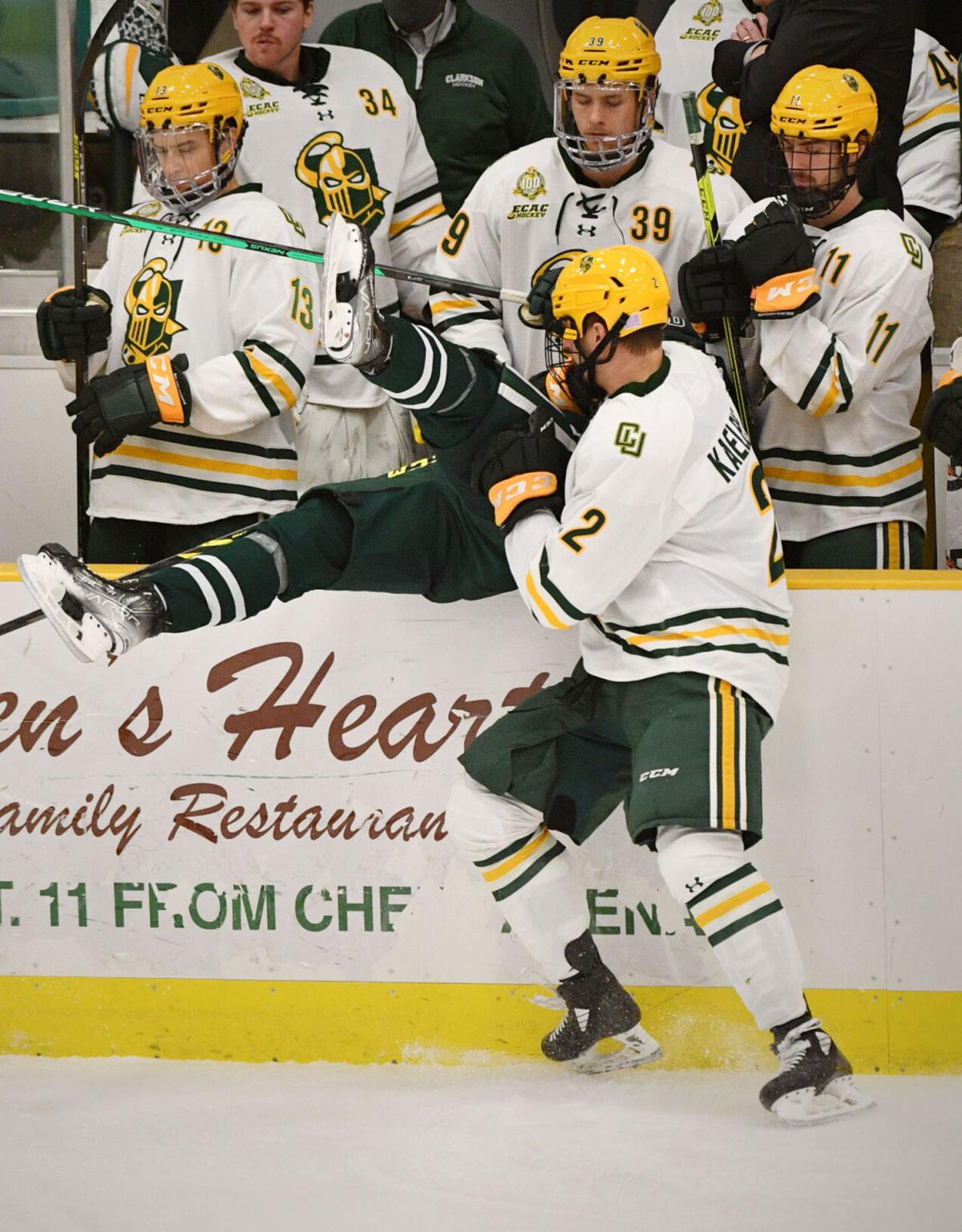 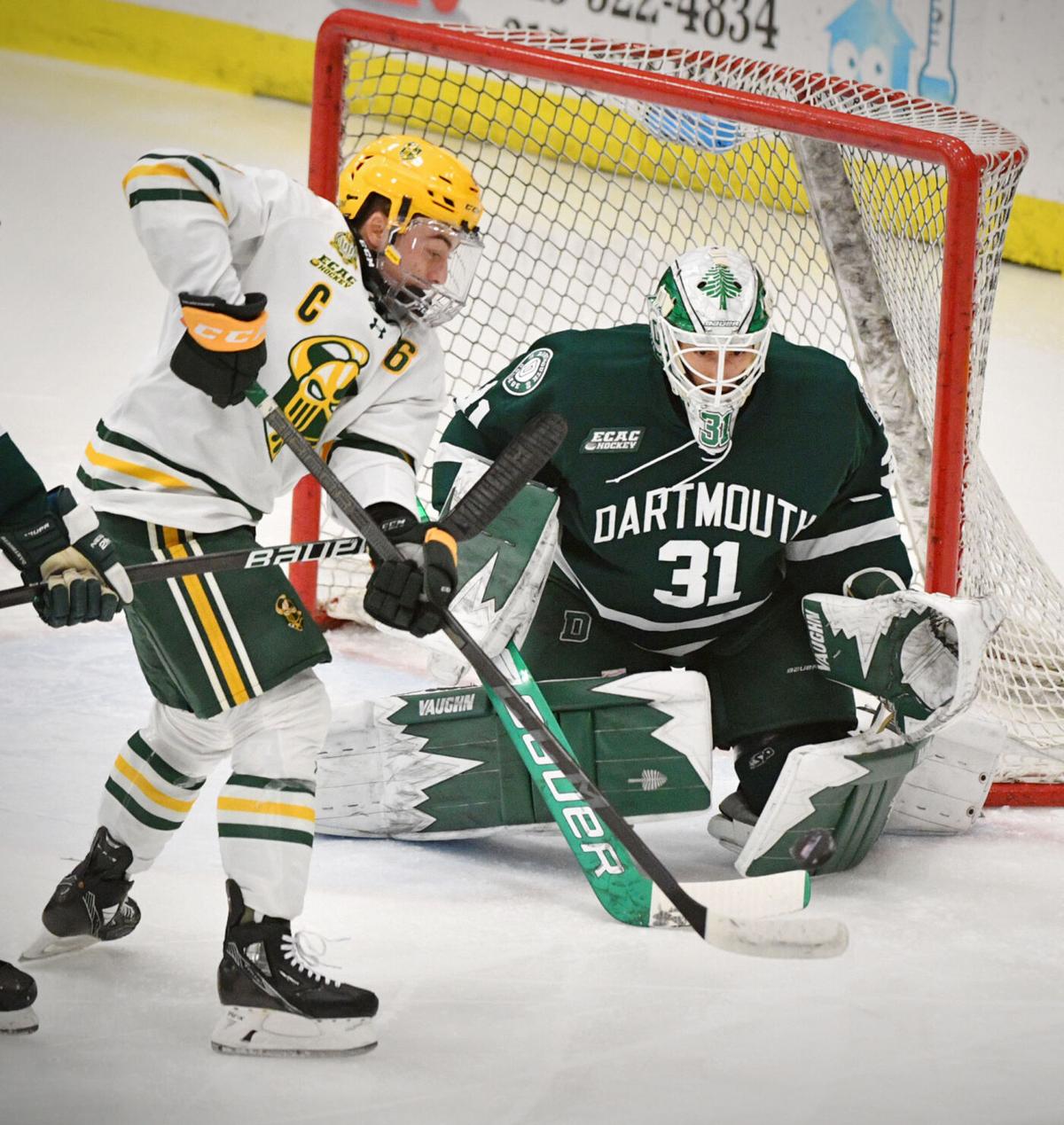 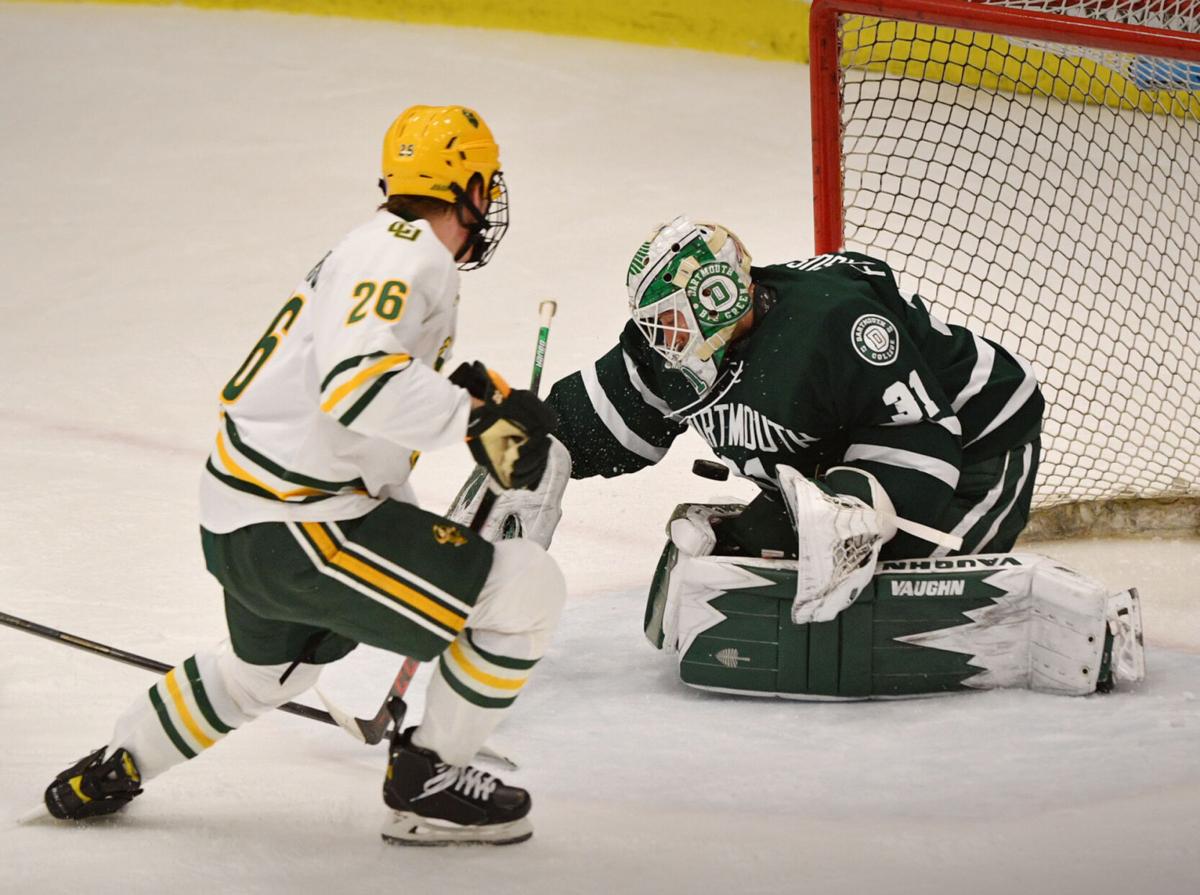 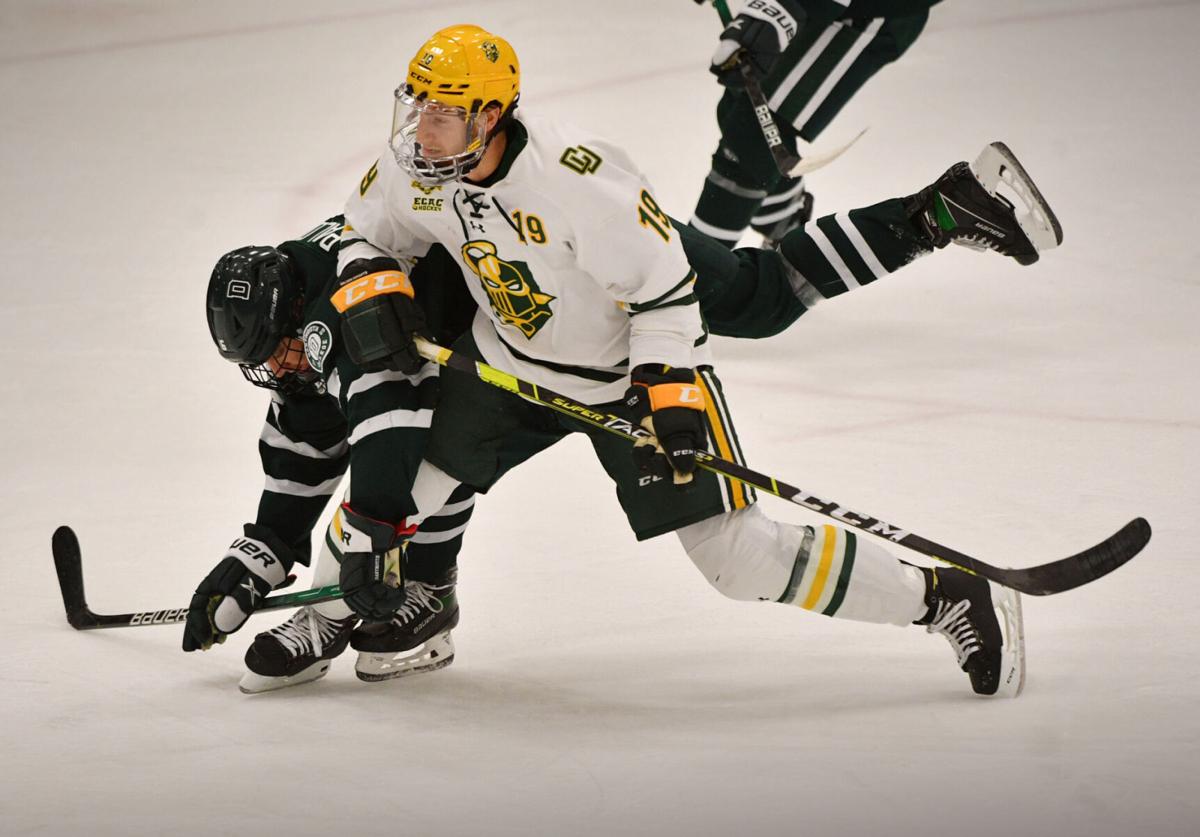 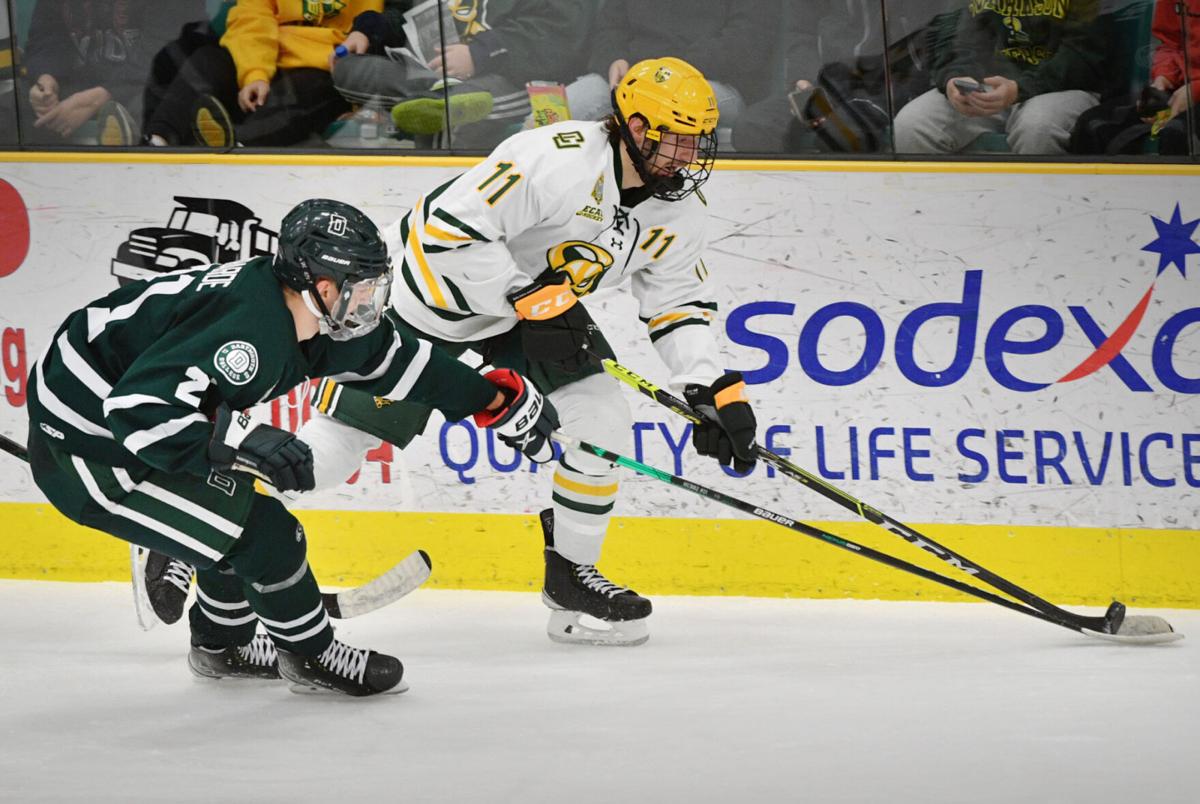 POTSDAM — Clarkson completed a weekend home sweep with a 3-0 victory over Dartmouth in a men’s ECAC Hockey game before 2,620 Saturday night at Cheel Arena.

Last weekend, the Golden Knights (6-4-1 overall, 2-2 ECAC Hockey) lost an overtime game and then lost in regulation in the opening weekend of conference play at Union and Rensselaer.

But after an impressive 6-2 win over Harvard on Friday, the Golden Knights were more impressive defensively Saturday, as goalie Ethan Haider made 27 saves for his first collegiate shutout.

“I think we played really well and this weekend was a big step for us,” Haider said. “It’s a move in the right direction, especially after the sour taste we got last weekend. We’ve been buying into our systems and doing the right things, the little things. We’ve been playing Clarkson hockey. We didn’t get away from that. That’s what we’ve been preaching the last couple weeks, playing that style of hockey.”

Clarkson dominated the opening period, outshooting the Big Green 11-4, but neither team scored a goal.

The game remained scoreless for most of the second period as well, though Dartmouth (2-4, 2-3) controlled play for most of it, with an 11-6 edge in shots.

Clarkson picked up some offensive momentum in the last five minutes of the period and pressured Big Green goalie Justin Ferguson for about three straight minutes before finally getting a goal on a shot from Zach Tsekos from between the circles at 17 minutes, 43 seconds.

The Golden Knights went ahead 2-0 at 6:43 of the second period during a power play when defenseman Noah Beck scored on a shot from the faceoff circle dot with Jack Jacome and Alex Campbell assisting.

“Credit goes to (Jacome),” Beck said of his goal. “He made a nice play at the blue line, keeping the puck in. There was a little breakdown on Dartmouth’s penalty kill and they left a little lane open for the shot.”

One second after another power play ended at 12:47 it was Campbell’s turn to score, giving Clarkson a 3-0 advantage off assists from Beck and Brian Hurley.

“I thought Alex Campbell was a phenomenal player this weekend,” Clarkson coach Casey Jones said. “Campbell got the momentum back in our favor. To get that goal lifted us big time.”

Campbell, a Nashville Predators draft choice, enjoyed a productive weekend for the Golden Knights, with a goal and two assists in Friday’s win over Harvard.

“It was a big focus this weekend trying to keep the speed and the offensive zone possession,” Campbell said. “We did a good job this weekend. Early on in the season we have to figure out our identity and what we want to work towards. There was lot of communication out there. We were taking advantage of our chances.”

Clarkson spent the last seven minutes of the game trying to shut out the Big Green as Haider, another Predators draft pick, held off a late flurry by Dartmouth when it pulled Ferguson late for an extra attacker.

Dartmouth finished with a 27-24 edge in shots and left the arena feeling it had played well and looking forward to a home game with the Golden Knights on Jan. 21.

“Five-on-five, we were excited about how we played,” said Dartmouth coach Reid Cashman. “We thought we were skating, really in the second we got speed. We had sticks on the ice and were creating some turnovers. We were getting pucks to the scoring area, but we weren’t able to finish. It’s a tough building against an experienced team.”

Brasher Falls native Will Arquiett sent the game to overtime with his first career goal at 15:54 of the second period for the Saints (2-3-4, 1-1-2).

Baker Shore scored at 4:53 of the first period for Harvard.

Cameron Buhl scored in the shootout for the Saints, who picked up one point in the conference standings. Casey Dornbach and Sean Farrell scored for the Crimson in the shootout.