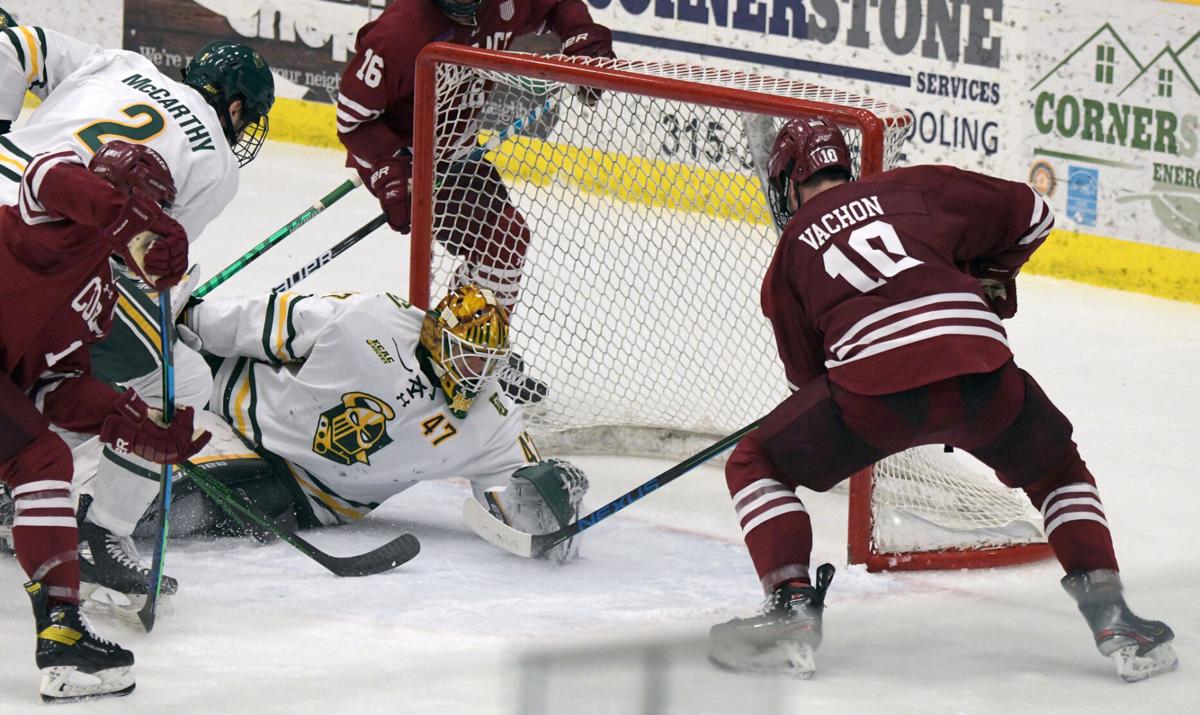 Clarkson goalie Ethan Haider makes a save on Colgate’s Arnaud Vachon during the Golden Knights’ most recent game on Feb. 28. Clarkson University photo 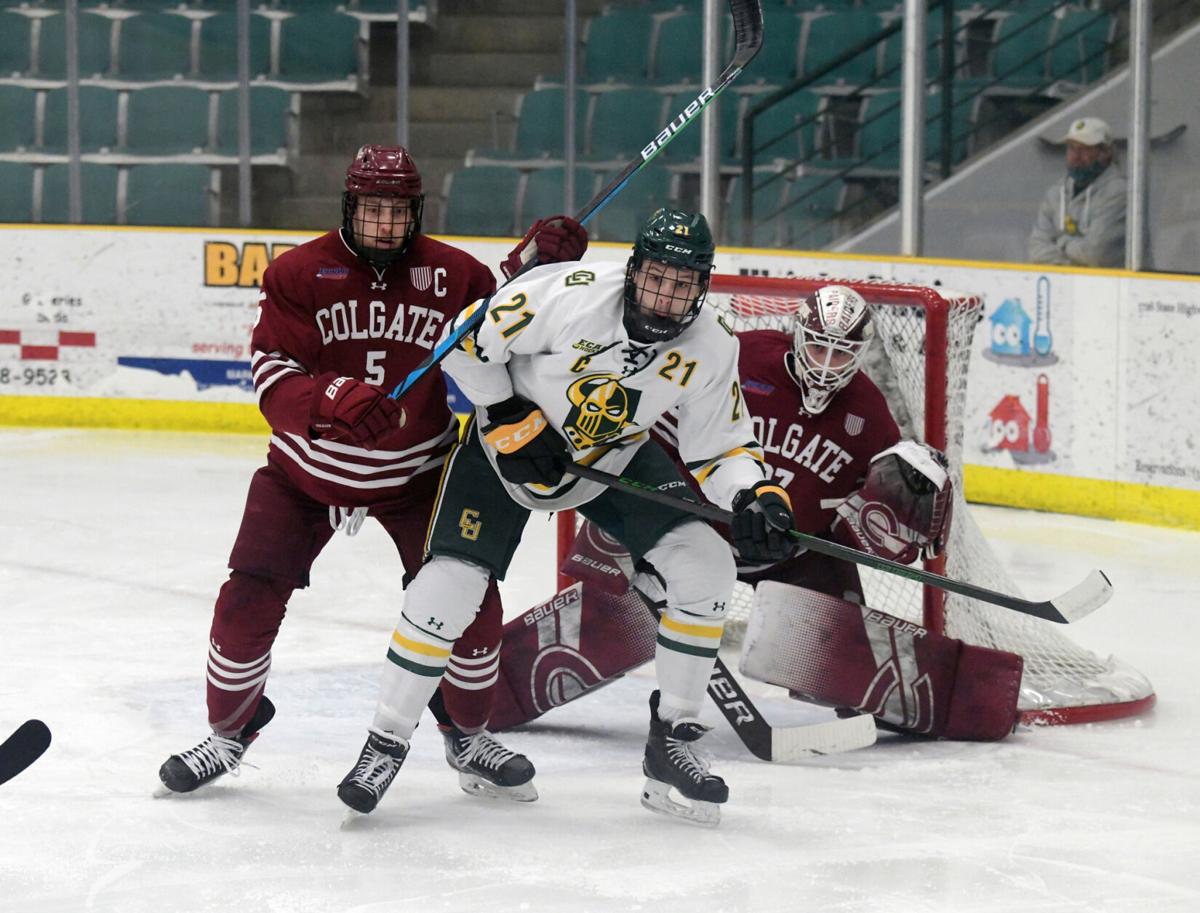 Clarkson’s Josh Dunne, center, positions himself in front of the crease while Colgate’s Paul McAvoy tries to move him away from goalie Carter Gylander during a game Feb. 28 at Cheel Arena. Clarkson University photo 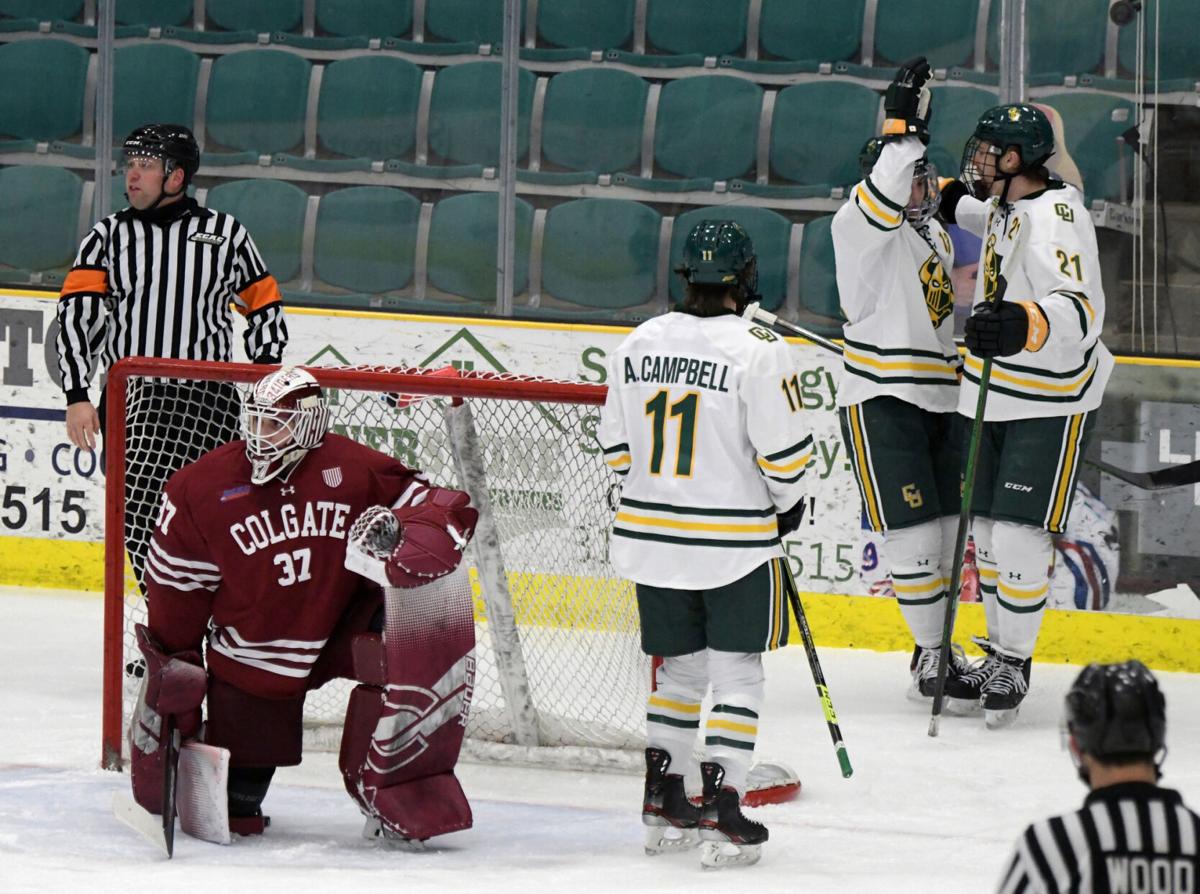 Clarkson goalie Ethan Haider makes a save on Colgate’s Arnaud Vachon during the Golden Knights’ most recent game on Feb. 28. Clarkson University photo

Clarkson’s Josh Dunne, center, positions himself in front of the crease while Colgate’s Paul McAvoy tries to move him away from goalie Carter Gylander during a game Feb. 28 at Cheel Arena. Clarkson University photo

POTSDAM — Unless Clarkson University men’s hockey coach Casey Jones can come up with an opponent for this weekend, the Golden Knights will enter the ECAC Hockey semifinal on March 19 having played just two games since Feb. 6.

As of Saturday, Clarkson had not found a possible foe.

Clarkson (11-7-4 overall) saw the final four games of the regular season vanish last week when St. Lawrence University’s program went on pause due to COVID-19 issues. The Golden Knights will finish second in the four-team conference, with Quinnipiac clinching the title on Friday.

The Golden Knights were supposed to play the Saints twice this past weekend and two more times later this week. Clarkson took a break of its own in early February due to COVID-19 concerns on campus, so the only time the Golden Knights have played recently were games against Colgate on Feb. 26 and 28, both wins.

Clarkson will host SLU in a semifinal on the 19th, but Jones wants to play two more games. He has spent recent days placing calls with potential opponents, whether it’s a team that still has a postseason coming up or a team that’s already been eliminated from its own conference tournament but may still want to play.

“We are just trying,” Jones said Friday. “I’ve been on the (phone) since the SLU call came in. It’s been nonstop.”

Because the conference tournament did not finish last season, due to the initial COVID-19 outbreak, Clarkson is still the defending champion, having won the title in 2019 against Cornell in overtime.

One edge the Golden Knights will have on SLU is that the Saints can’t practice until just before the game because the team is on a pause. But Jones has coached long enough to know that practice is a bit overrated this time of the year.

“You want to practice less this time of year,” Jones said. “It’s game details you have to stay sharp on, that’s what you try to mimic in practice. Early in the year you have to work a lot (on the systems) so it’s easy to keep guys motivated. This time of year practice is mundane.”

When asked if Clarkson could have scrimmages within its own squad to duplicate a bit of game mentality Jones said, “You want someone in a different color jersey.”

The winner of the ECAC Hockey tournament will get an automatic bid to the NCAA Tournament. Losing a chance to possibly pick up four wins against the Saints may make it more difficult for Clarkson to gain entrance in the 16-team field. Normally the PairWise Rankings decides the field, but this year there has not been many nonconference games, so it will be chosen by a committee.

“You think about everything,” Jones said when asked if the four games missed hurts his team’s chances. “You just want to get a chance to (make the NCAA tournament).”

Before the recent situation with SLU, ECAC Hockey had a shot to see all four of its teams complete the 18-game conference schedule.

“That’s off the table now,” said Jones. “I think there has been a lot of people who have worked really hard to make this season happen. We have to make sure we finish.”

Clarkson’s pause in February had nothing to do with the men’s or women’s hockey teams. Jones takes pride in the discipline his players have shown to avoid putting anyone on the team at risk.

“We have a good leadership group and good core values,” Jones said. “I’m extremely proud of our guys. They made a commitment to themselves. It’s the relationships in the locker room that go a long way and the guys have great respect for each other.”