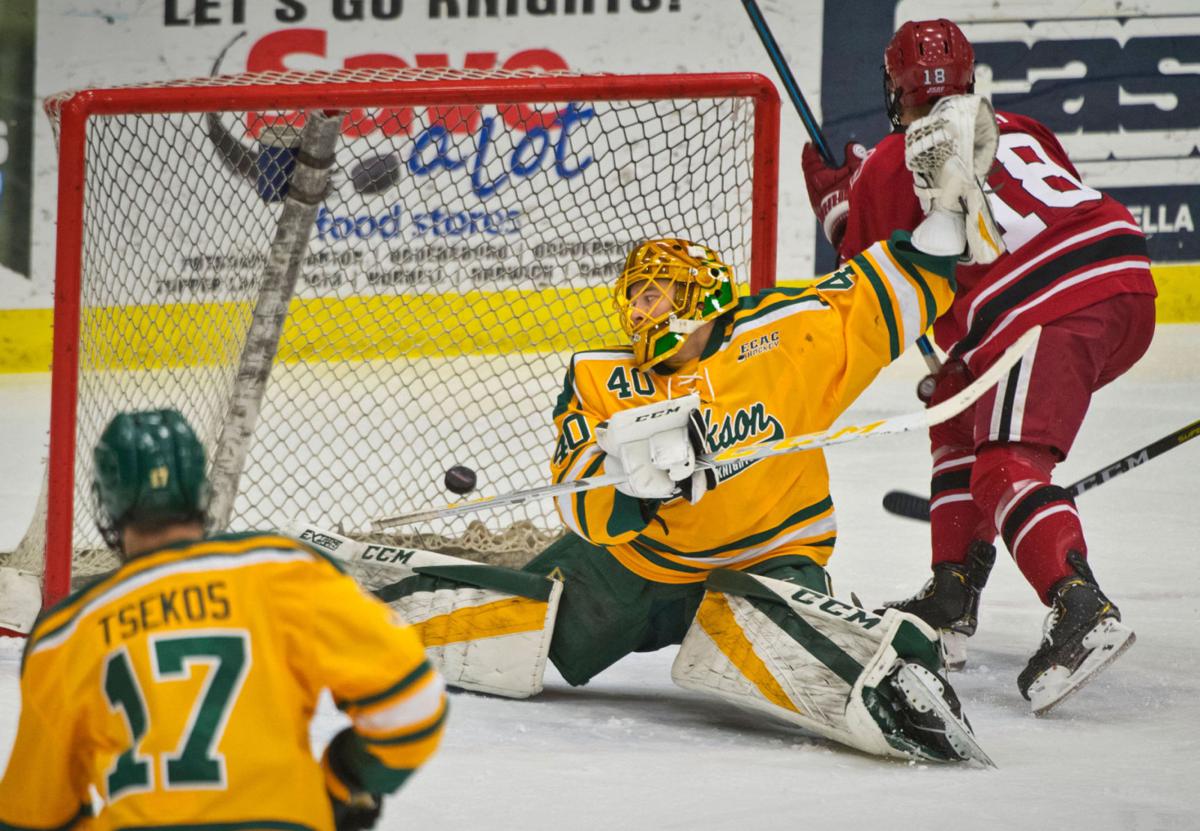 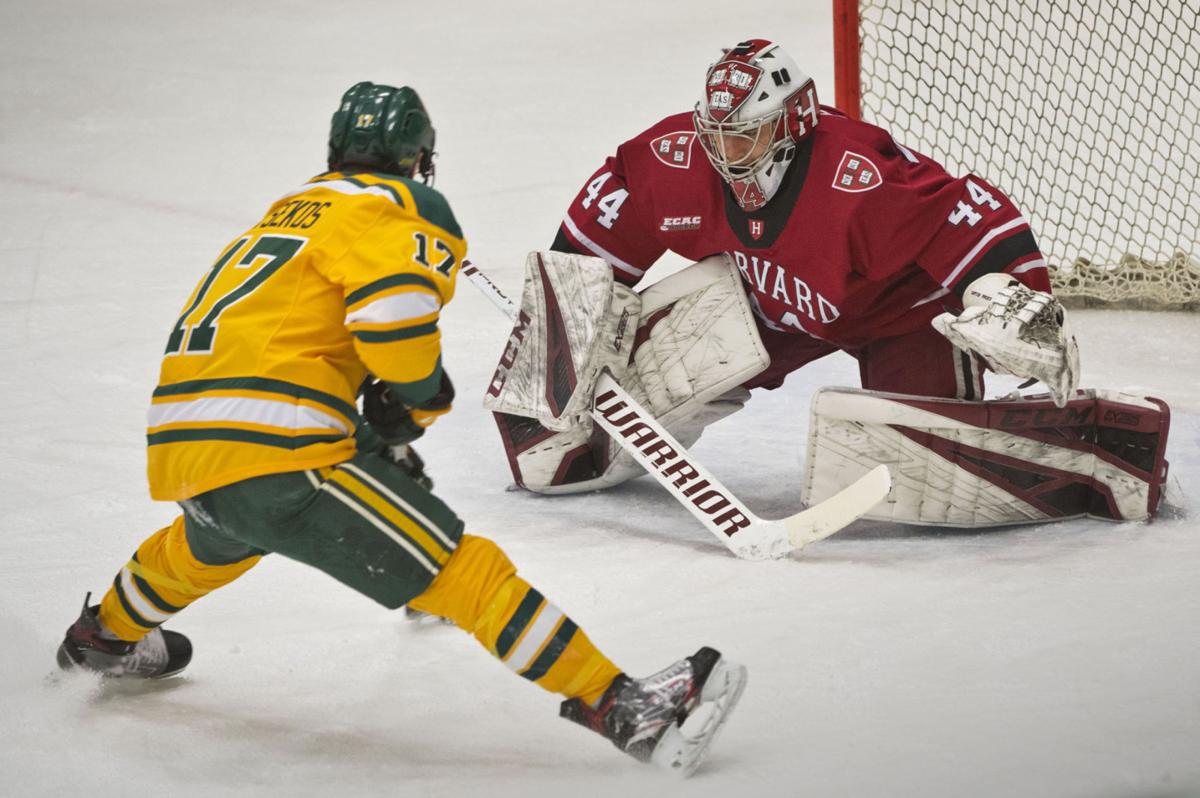 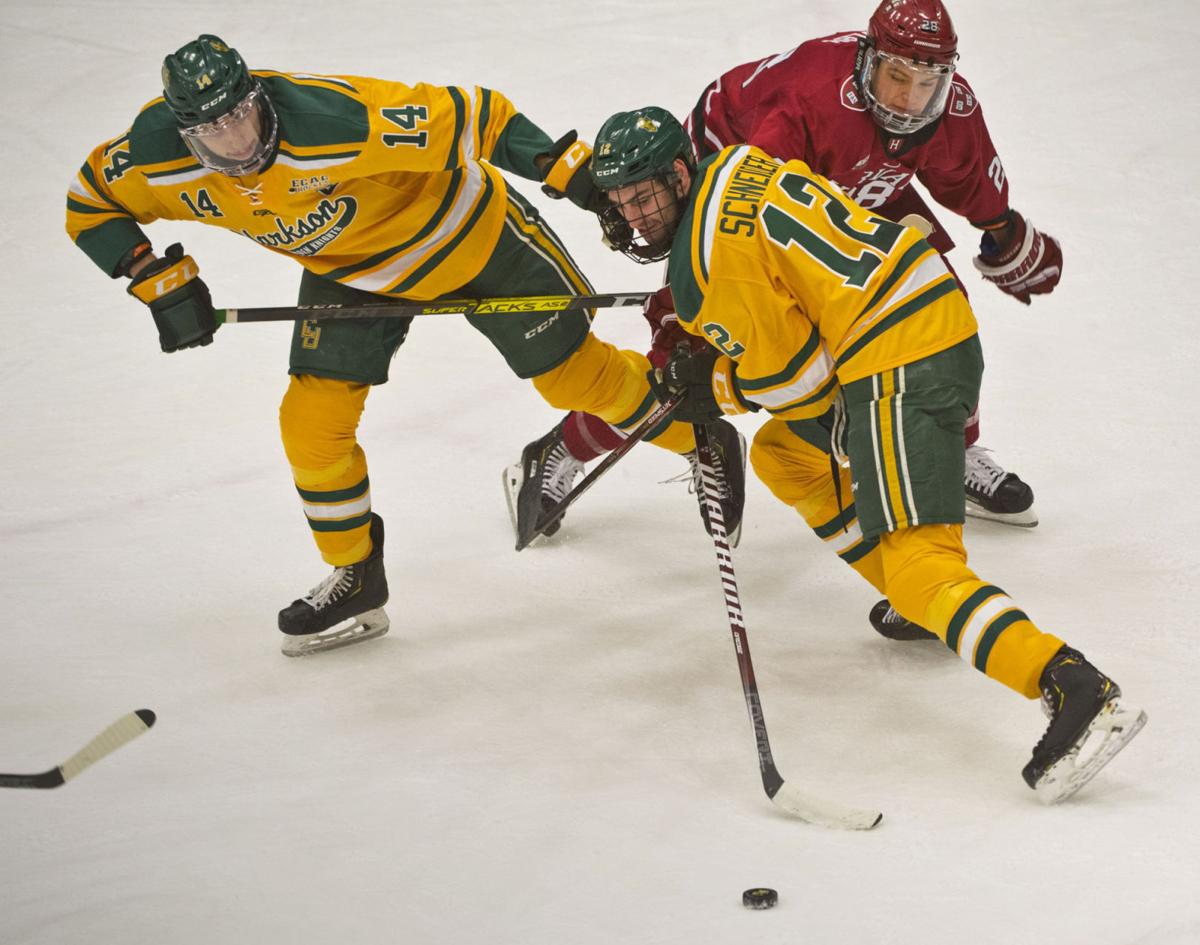 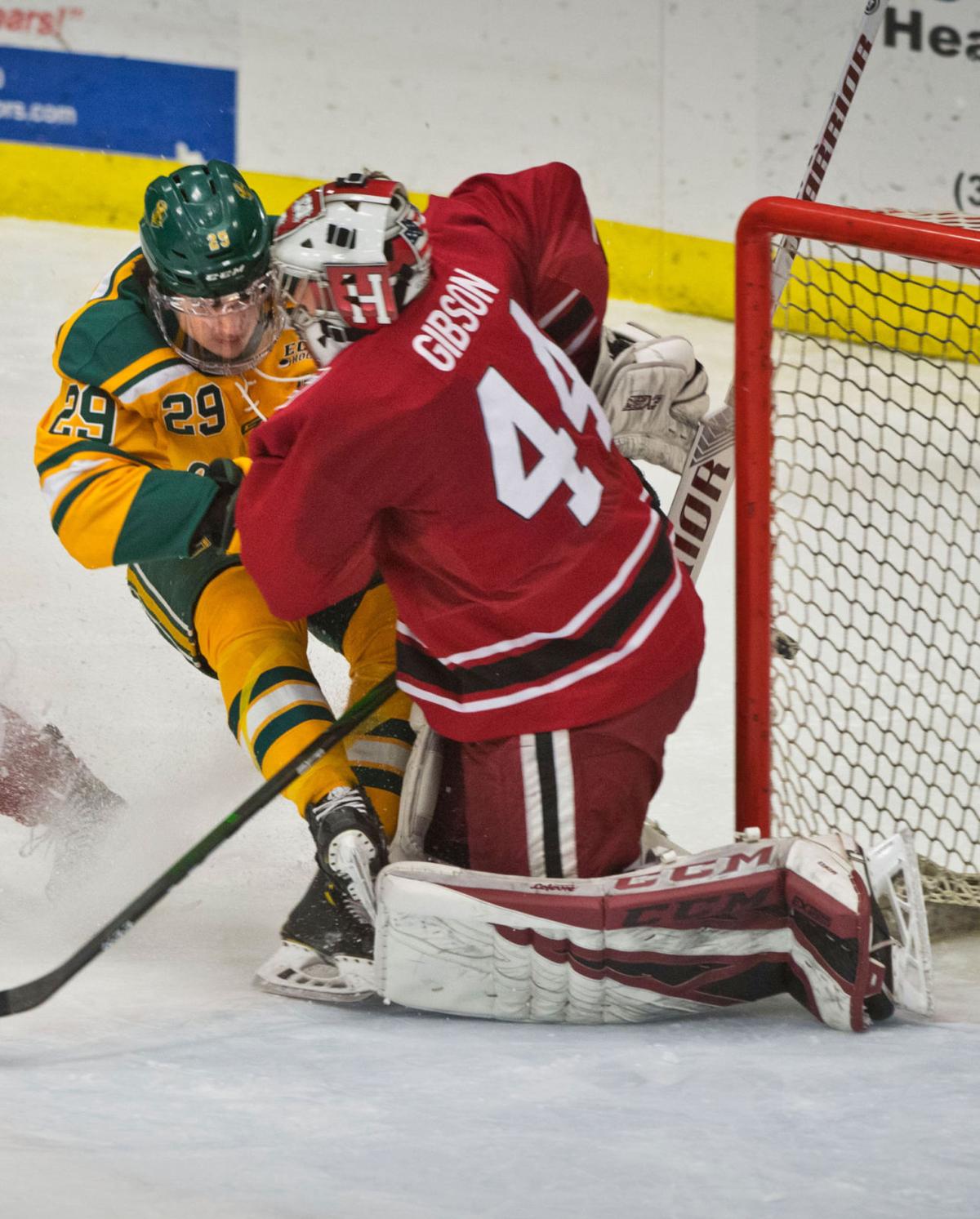 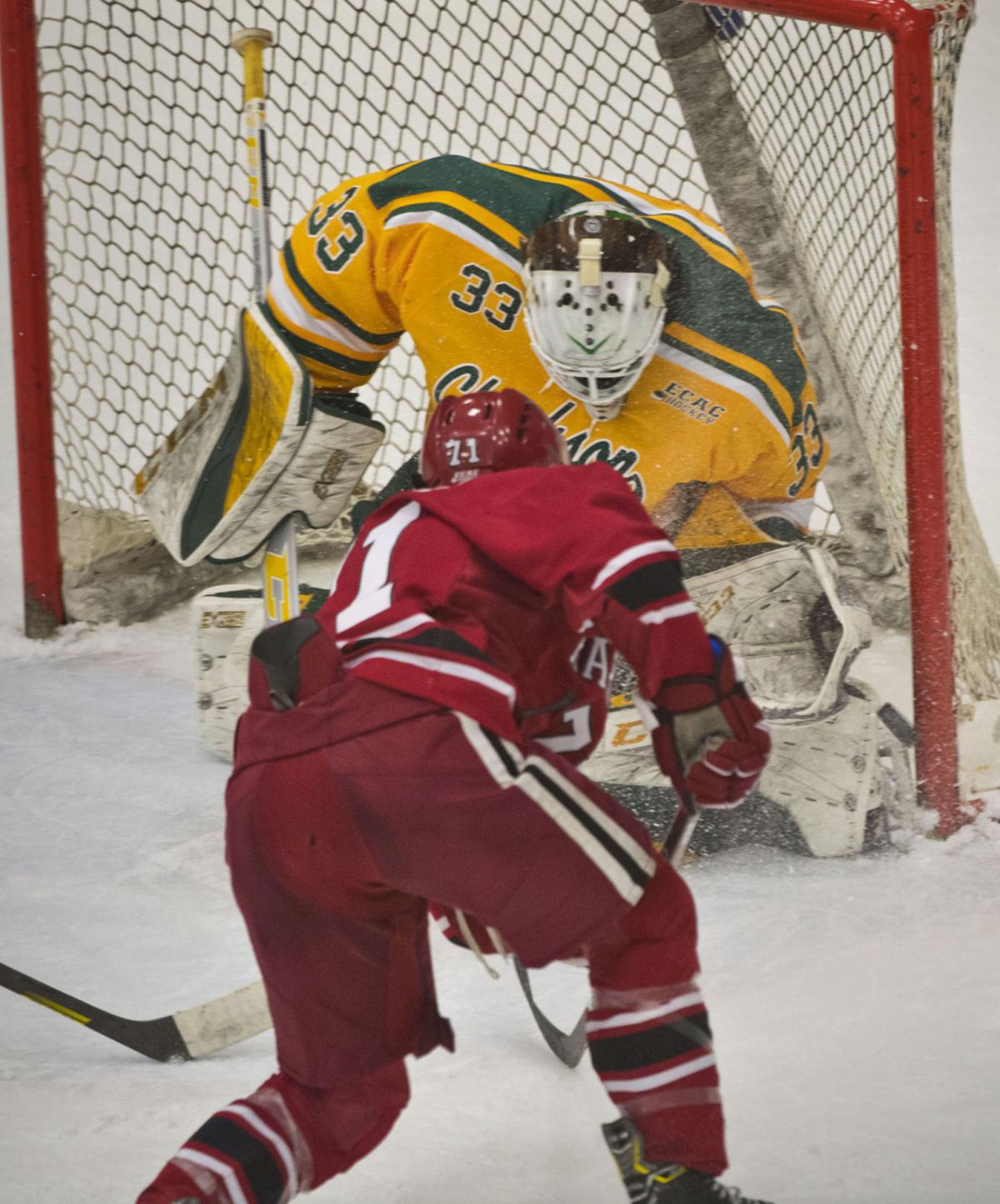 POTSDAM — Heading into this weekend the Clarkson University men’s hockey team could afford to lose one of its next three games and still have a chance to win the ECAC Hockey regular-season title.

That one loss was handed out Friday night as Harvard jumped on Clarkson early and went on to defeat the Golden Knights, 5-2, before 2,903 in an ECAC Hockey game at Cheel Arena.

“We made a couple of just brutal turnovers early,” Clarkson coach Casey Jones said. “We gave them momentum on it. They get a power-play goal and that’s a good power-play team. From that point on we felt sorry for ourselves, it looked like. We gave up 32 shots through two periods of play. You aren’t going to win many hockey games like that against a skilled team, one of the better offensive teams in the country.”

The Crimson enjoyed a 2-0 lead before Clarkson had attempted its first shot-on-goal.

“(Clarkson) is just too good a team to chase from behind with,” Harvard coach Ted Donato said. “We didn’t want to chase the game. They are also the best defensive team in our league and have a goalie that’s got a .941 save percentage. For us, we have a lot of respect for the way that this program has performed and their coaching staff. It was important that we got off to the best start to give ourselves a chance for success.”

Clarkson’s Devin Brosseau was called for holding, 2 minutes, 35 seconds into the game and Harvard scored 10 seconds left on a shot from Jack Drury. Jack Rathbone took a shot from near the blue line that slid under Clarkson goalie Frank Marotte and stopped just in front of the red line. Drury skated in and tapped it past the line before anyone could react.

“I think our power play needed a goal there and it was good to come through,” Drury said. “It was a great shot by Rathbone. (The puck) was just hanging around the net so I had to bang it home. Your eyes light up and you just jump on it, so it’s a good little feel.”

The Crimson added a second goal at 4:49 on a wrap-around shot from Jack Donato. At that point of the game Harvard outshot Clarkson 9-0.

The Crimson had a chance to add to the lead when Clarkson’s Brian Hurley was called for tripping at 10:18.

Golden Knights forward Zach Tsekos had two chances to scored on shorthanded breakaways during the Harvard power play. His first game at 11:17 and his second at 11:53, in both cases Harvard goalie Mitchell Gibson made pad saves.

“Overall we blocked a lot of shots and I think the offense took care of itself,” Gibson said. “I felt good tonight. I was seeing the puck pretty well. I had a clear mind and came up when I needed too. The two breakaways, knowing they had the No. 1 penalty kill in the country, I was just trying to be ready at all times.”

Harvard finally got the third goal of the period at 12:48 on a rebound shot from Jack Badini. Rathbone once again took the initial shot.

Anthony Callin cut Harvard’s lead to 3-1 with a goal on a backhanded shot just 1:48 into the second period.

“(Shane Kuzmeski) got the puck in the ‘D’ zone and I kind of got my feet moving up along the wall,” Callin said. “I tried to put it on net. You could tell the team was starting to rally a little bit, and then we let up another one, which kind of gets you.”

Harvard responded with a goal from Henry Thrun at 4:51 of the second period. The play was reviewed as the officials looked to see if a Harvard player had interfered with Marotte.

After Harvard took a 4-1 lead Jones pulled Marotte for the first time all season and replaced him with Kris Oldham, a transfer from Nebraska-Omaha.

Clarkson had a chance to cut into the lead at 9:01 of the second period when Jack Jacome and Anthony Romano skated in on a two-on-one. Jacome passed to Romano but Gibson got a pad on the shot.

Harvard’s Colton Kerfoot thought he had extended the lead to 5-1 with 4:36 left in the second period, but after a review, the officials ruled it was not a goal.

Donato scored his second goal for the Crimson, this one into an empty net, at 17:30 of the third and Clarkson answered with a goal from Chris Klack at 18:28 to close out the scoring.

The Big Green (12-10-4, 9-8-2) rallied from a 2-1 deficit early in the second period and answered with four straight goals to defeat St. Lawrence University in an ECAC Hockey game at Appleton Arena.

Drew O’Connor tied the game for Dartmouth with a goal at 15:05 of the second period, and Tanner Palocsik scored exactly 60 seconds later to put Dartmouth ahead for good.

O’Connor added a second goal at 12:33 of the third period to make 4-2 and Will Graber added an empty-net goal with 19 seconds remaining.

Brendan Demier scored the first goal of the game for Dartmouth at 3:27 of the first period.