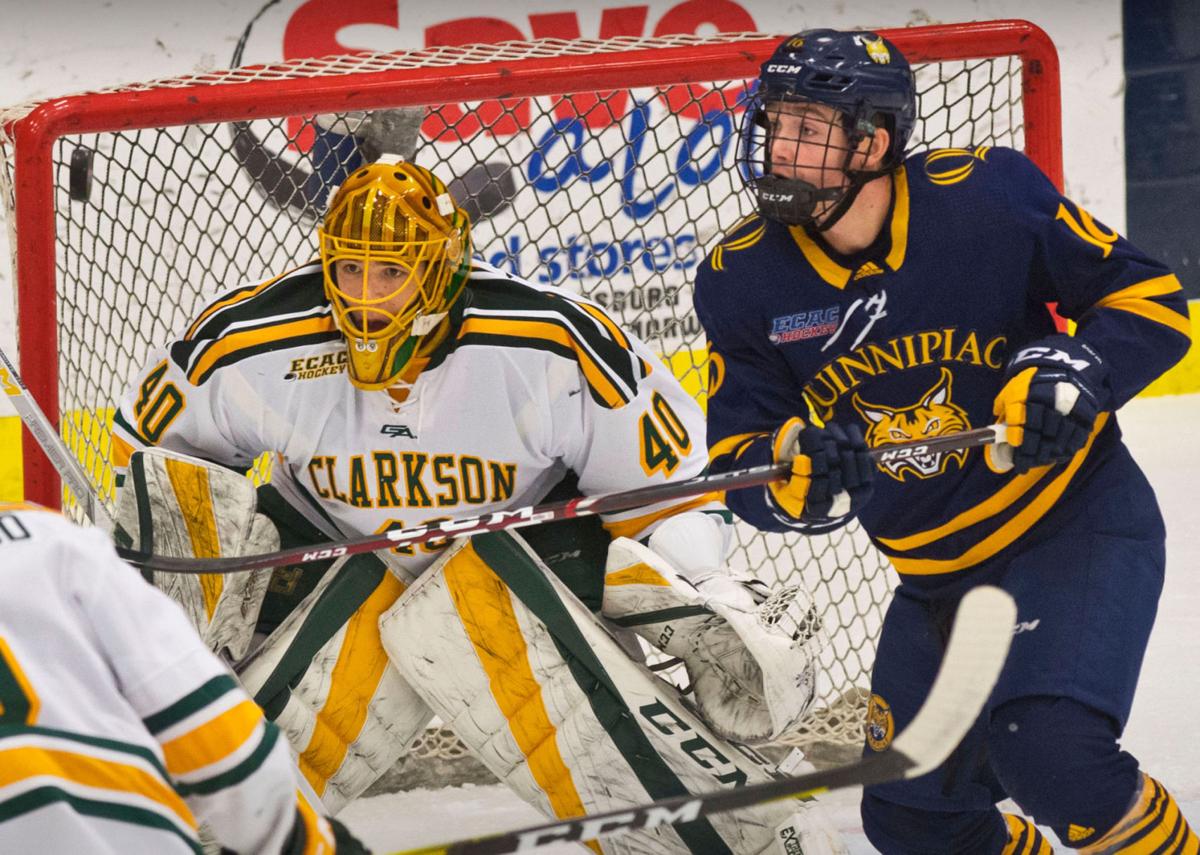 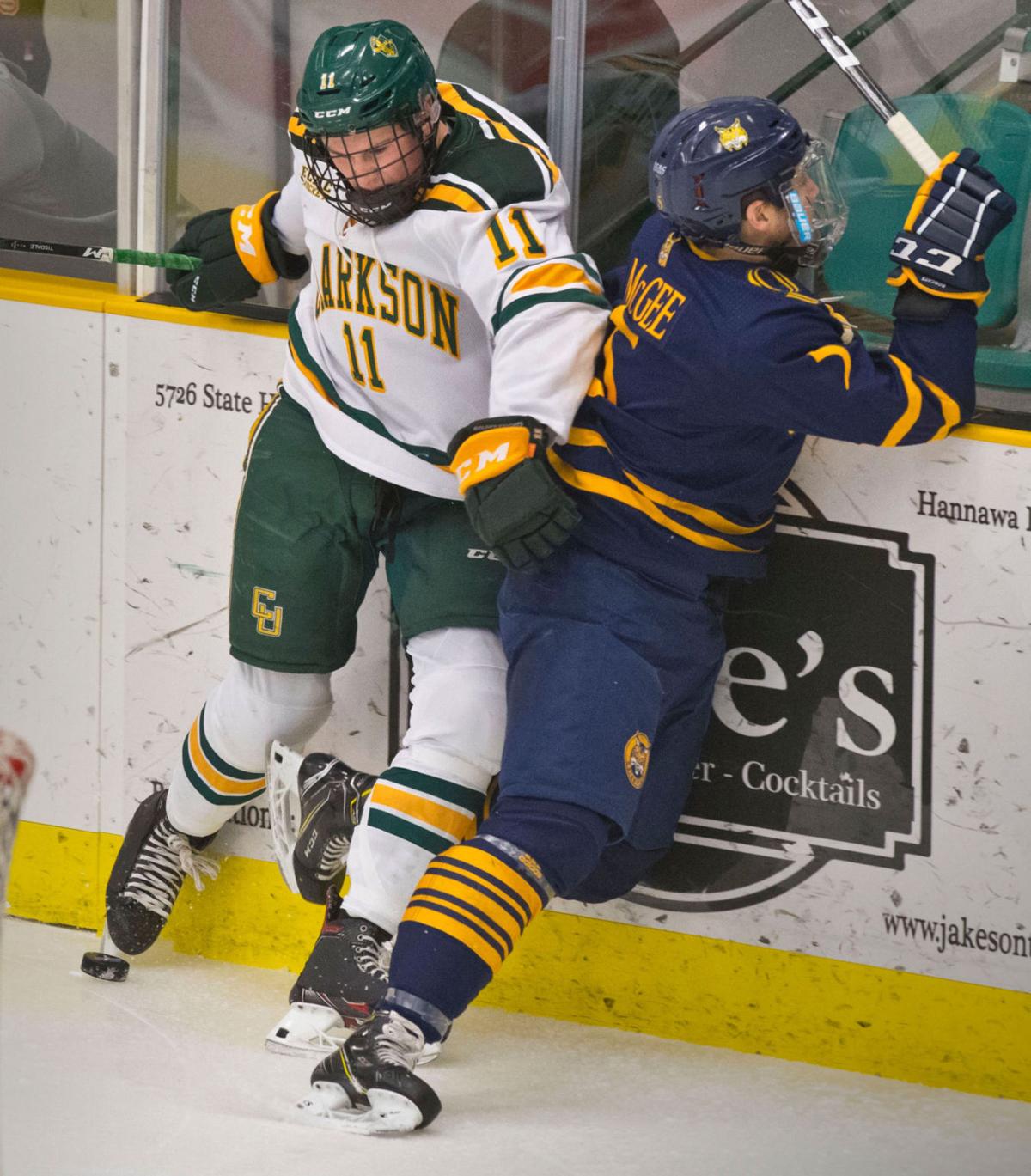 Clarkson’s Adam Tisdale checks Quinnipiac’s CJ McGee off the puck and into the boards during the first period Saturday. Christopher Lenney/Watertown Daily Times 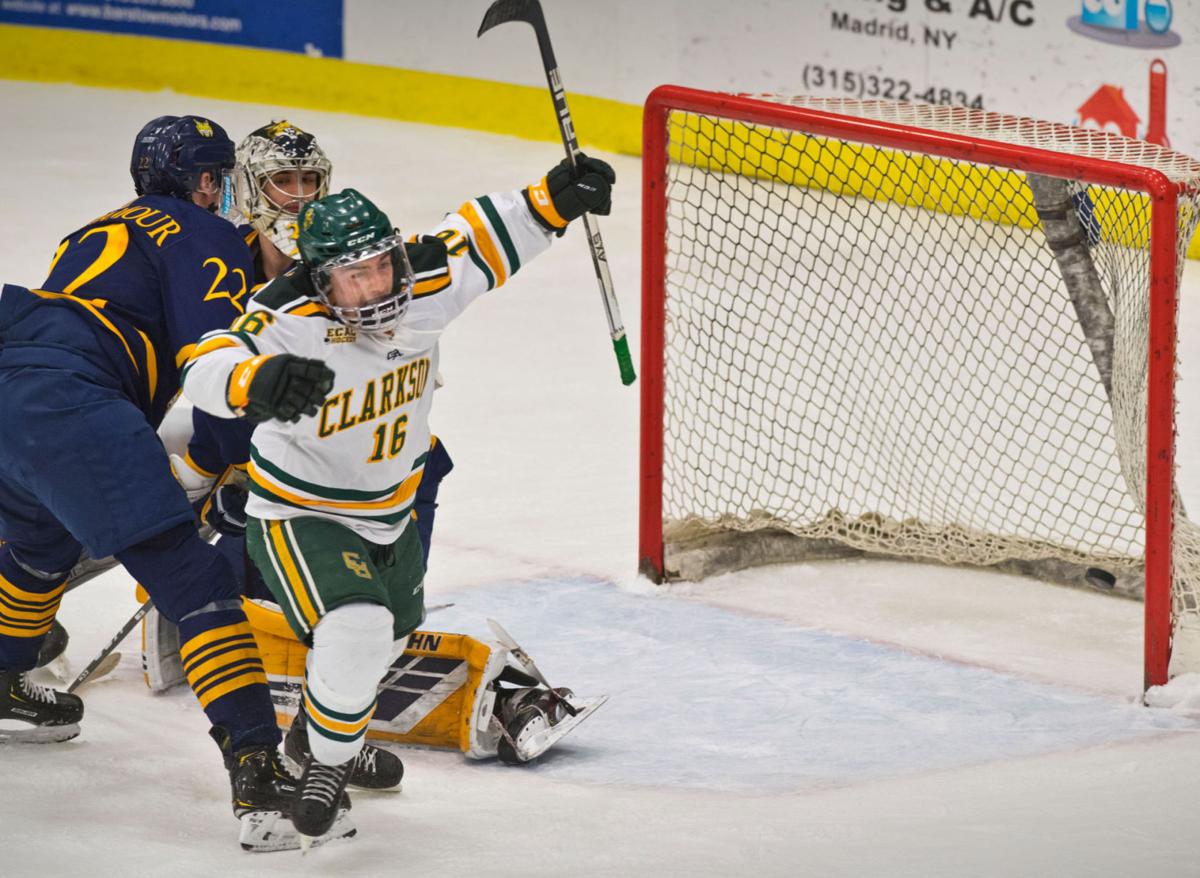 Clarkson’s Jack Jacome reacts as the puck hits the back of the net for his first goal of the game against Quinnipiac. Christopher Lenney/Watertown Daily Times 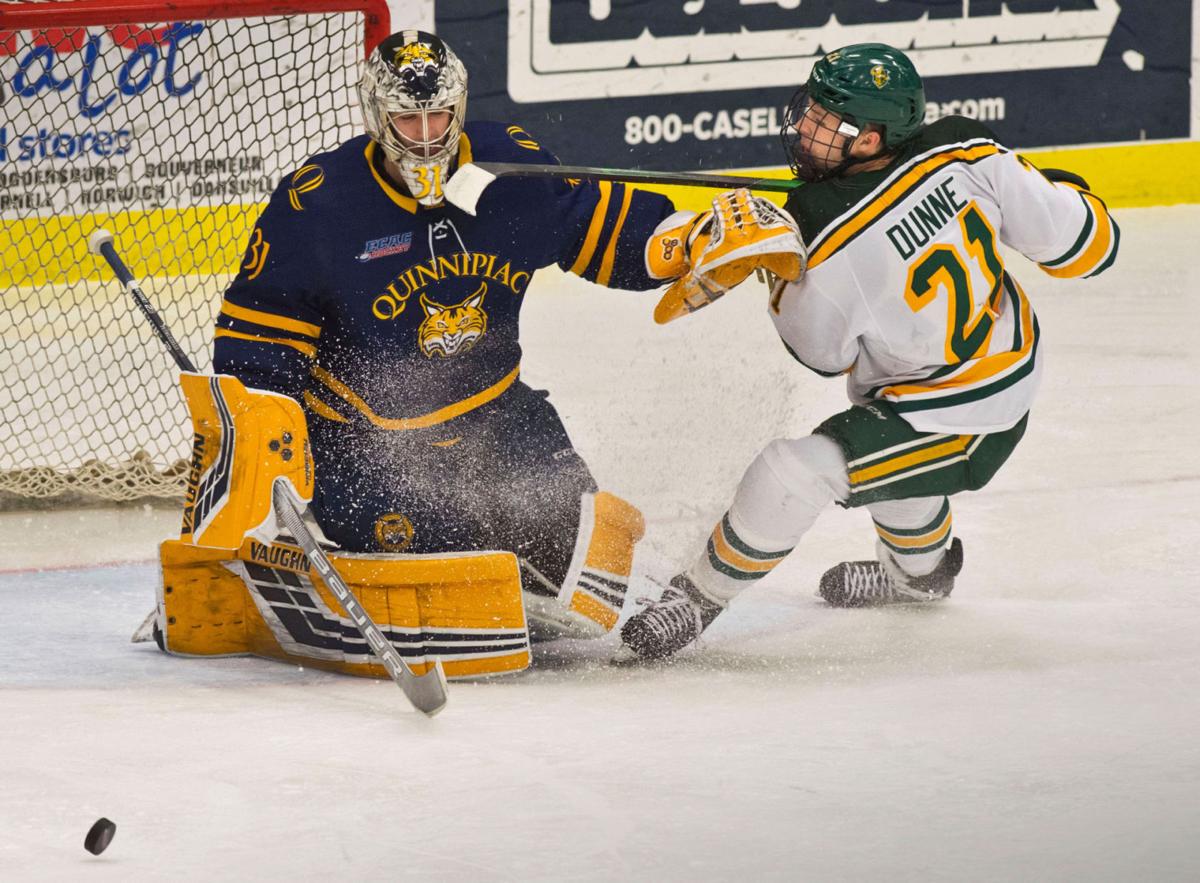 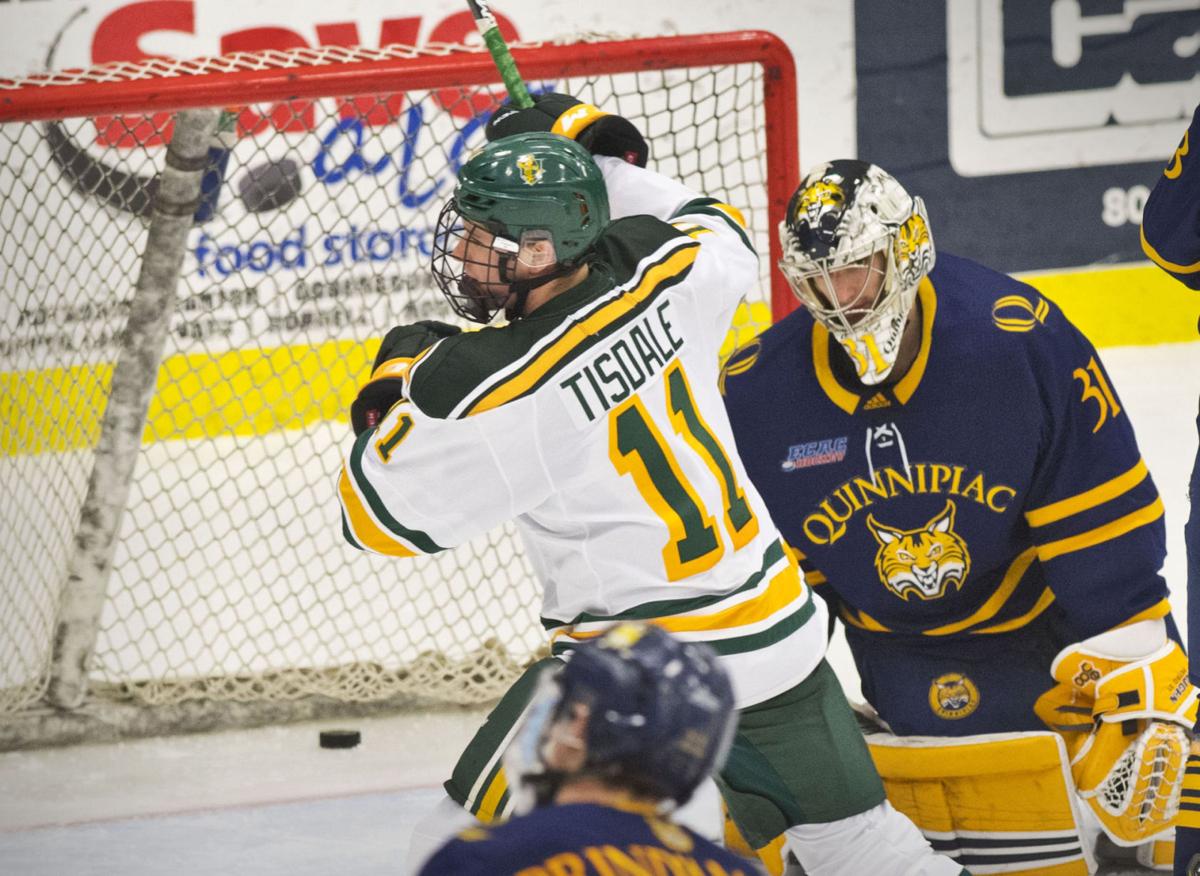 Clarkson’s Adam Tisdale checks Quinnipiac’s CJ McGee off the puck and into the boards during the first period Saturday. Christopher Lenney/Watertown Daily Times

Clarkson’s Jack Jacome reacts as the puck hits the back of the net for his first goal of the game against Quinnipiac. Christopher Lenney/Watertown Daily Times

POTSDAM — Clarkson University junior forward Jack Jacome picked a timely moment to break out of a goal-scoring slump, producing two goals 23 seconds apart late in the first period to get the Golden Knights going in a 5-2 victory over Quinnipiac before 2,342 fans in a men’s ECAC Hockey game Saturday night at Cheel Arena.

The win moved Clarkson into first place in the ECAC Hockey standings, according to points, but the Golden Knights are behind Cornell, which has played one less game, in win percentage.

Jacome, who had scored 63 points in 97 career games heading into Saturday’s contest, gave Clarkson a 3-2 lead at 18 minutes, 39 seconds of the opening period with his second goal of the night.

He picked up an assist in a 2-1 win over Princeton on Friday, but in Clarkson’s previous 10 games he had been held to just two assists. His last goal before Saturday came Nov. 8 against Union.

“It definitely felt good, it’s been awhile,” Jacome said. “I have to give all the credit to my teammates. The first one, (defenseman Dustyn McFaul) made an incredible pass, it was lucky enough to go off my skate. The second one was all (forward Zach Tsekos). Something we’ve been talking about for a while is scoring more goals, simple as that. Little habits we are trying to do. I think our line did a good job with that tonight and hopefully it will give the team a boost for the rest of the season.”

Clarkson (15-4-2 overall, 9-2 conference) trailed 2-1 when Jacome scored his first goal of the game at 18:16 of the opening period. His second goal gave the Golden Knights the lead for good.

“I liked our pace and I liked our presence,” Clarkson coach Casey Jones said. “I thought we did a lot of good things in the (offensive) zone, too. We looked a little edgy in the third, to start it. (Quinnipiac) came with their push. I thought we settled in after that.”

Freshman Skyler Brind’Amour, the son of current Carolina Hurricanes head coach Rod Brind’Amour, scored the first goal of the game at 5:27 of the opening period.

Peter DiLiberatore added another goal at 16:52 to put the Bobcats up 2-1 at the time.

“I thought Clarkson was better,” Bobcats coach Rand Pecknold said. “I thought they had great passion. I thought their coaching staff did a really good job preparing for the game. Their goalie, (Frank Marotte) was excellent. They deserved to win, they were better than us tonight.”

In between the two Bobcats goals was a power-play goal from Clarkson’s Nick Campoli at 12:50, the first goal of the season for the sophomore.

“The full team was going and we were able to find the back of the net with secondary scoring,” Campoli said. “It was the first goal of my season this year and it couldn’t come with better timing. It was a good play by (Mathieu Gosselin) to find me. He waited out a defenseman and slid it to me.”

After a high-scoring first period both teams settled down for the rest of the game.

Adam Tisdale picked up his fourth goal of the season at 12:24 of the second period to put Clarkson up 4-2 and make Quinnipiac’s attempt for a road comeback much more difficult.

“We persevered and had a good response there, so that’s huge,” Tisdale said. “It’s always huge to go up by two. It was a really good play by Jamie (Collins). I thought our line was buzzing.”

Haralds Egle ended the scoring with his 10th goal of the season into an empty net at 17:56.

There had been talk from national college hockey media on Twitter before Saturday’s game that the team that lost would have a hard time earning a Pairwise Ranking spot high enough to make the NCAA Tournament in March. Clarkson moved from 13th to 10th with the win and Quinnipiac fell from 16th to 18th.

“We didn’t put too much emphasis on that,” Jones said. “Someone said today that one of these teams that loses this game was in trouble in the tournament. It’s early January for crying out loud.”

St. Lawrence University’s run of games at SUNY Canton came to an end in heartbreaking fashion as Princeton’s Luke Keenan scored with .6 seconds remaining in overtime to give the Tigers (3-12-4, 1-8-3) a win in the ECAC Hockey game.

The Saints finished 0-9-1 in their stretch at SUNY Canton, which hosted the team while Appleton Arena renovations were ongoing.