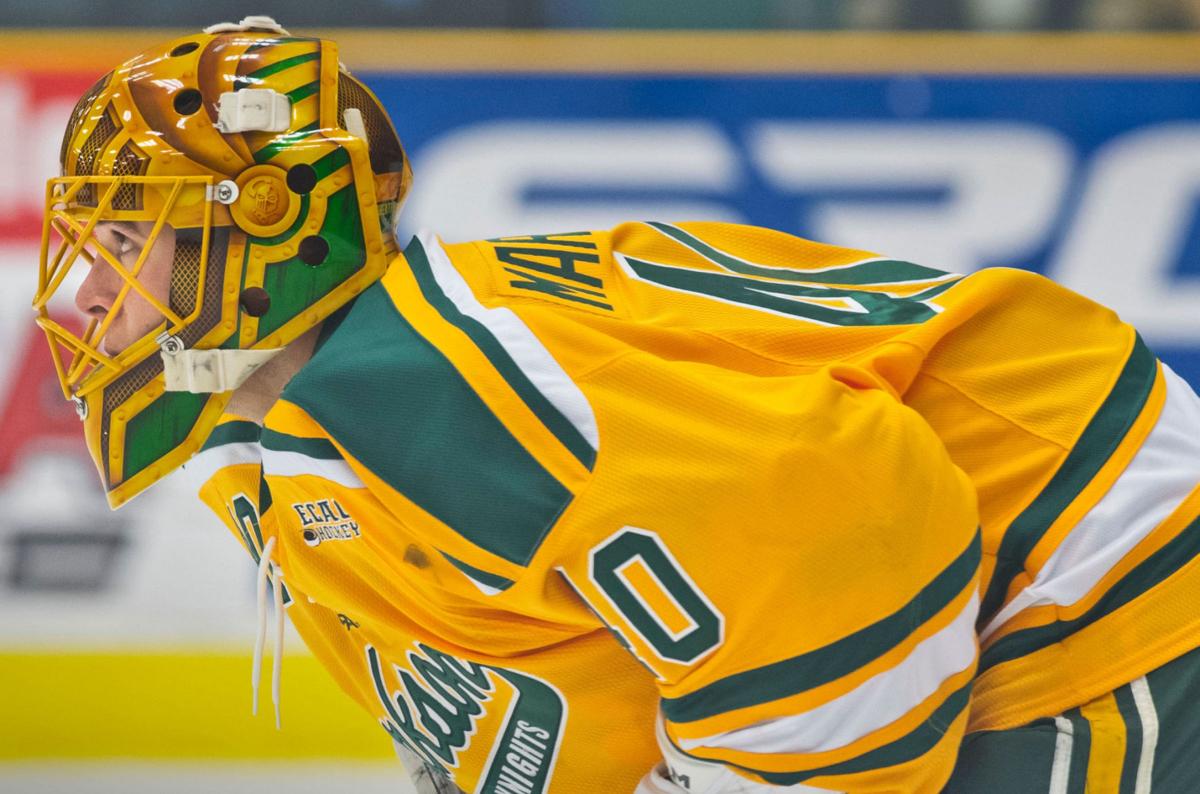 Goalie Frank Marotte came to Clarkson as a graduate transfer from Robert Morris as the Colonials’ starting goaltender and the program’s all-time leader in with 50 wins. Christopher Lenney/Watertown Daily Times 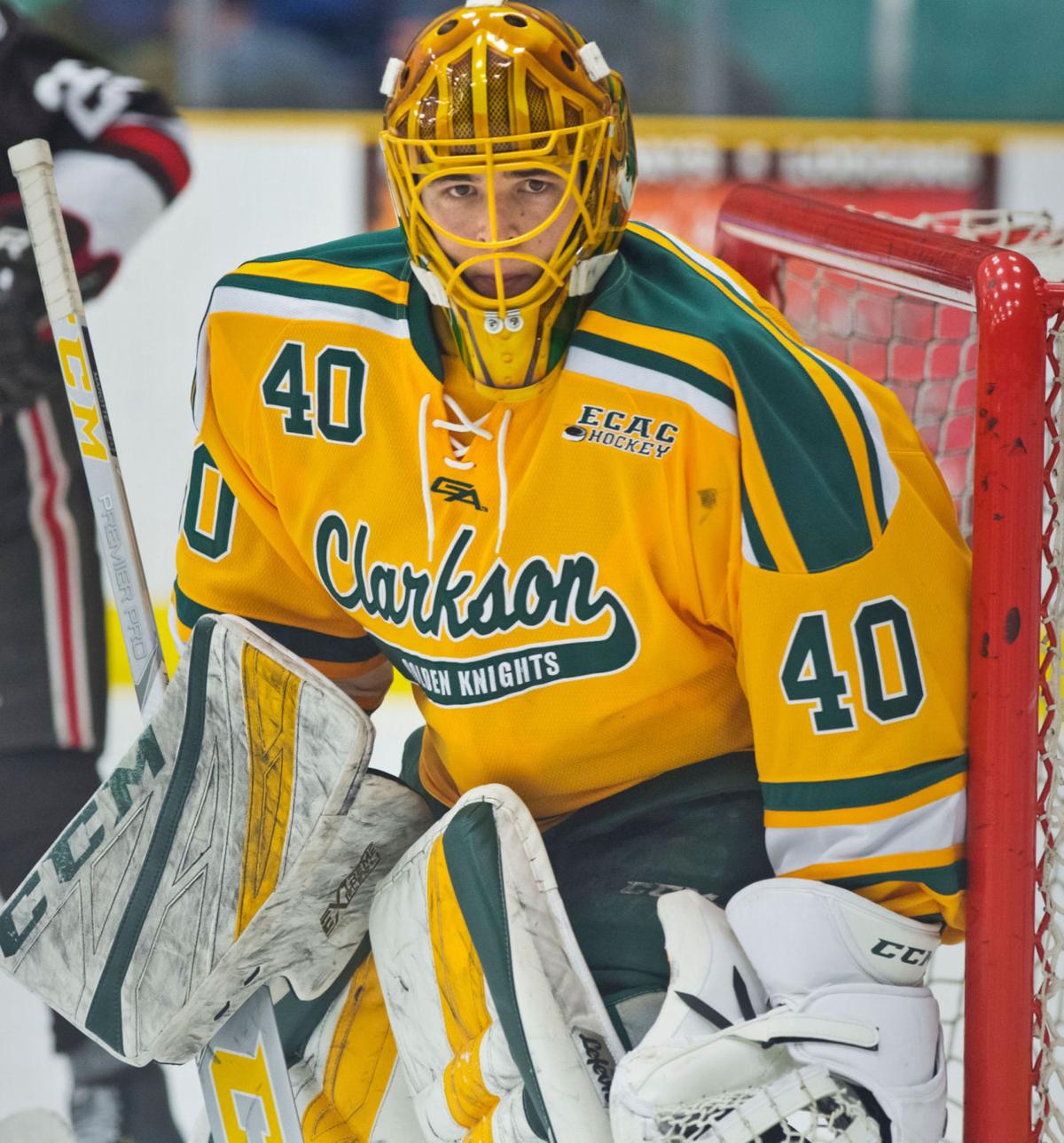 Clarkson’s Frank Marotte rated among the top goaltenders in the nation, posting a 1.67 goals against average, a .940 save percentage and a .750 winning percentage. Christopher Lenney/ Watertown Daily Times

Goalie Frank Marotte came to Clarkson as a graduate transfer from Robert Morris as the Colonials’ starting goaltender and the program’s all-time leader in with 50 wins. Christopher Lenney/Watertown Daily Times

Clarkson’s Frank Marotte rated among the top goaltenders in the nation, posting a 1.67 goals against average, a .940 save percentage and a .750 winning percentage. Christopher Lenney/ Watertown Daily Times

POTSDAM — Frank Marotte came to Clarkson from Robert Morris looking to see what he could do in a more prestigious men’s college hockey league and he made the most of the opportunity, even if the cancellation of the men’s ECAC Hockey and NCAA Tournaments deprived him of the chance to help lead the Golden Knights to championships.

Marotte, a 24-year-old senior from Longueuil, Quebec, is a favorite to win the ECAC Hockey Ken Dryden Award, which goes to the best goalie in the conference.

Marotte’s overall numbers are the best in ECAC Hockey and he ranks fourth nationally in GAA and fourth in save percentage.

He spent the first three years of his college career competing for Robert Morris in Atlantic Hockey, where he put up good numbers, but nothing like he did this season.

Having graduated last spring, Marotte opted to put himself into the NCAA transfer portal, knowing he’d be eligible to play this season. Clarkson coach Casey Jones, who just lost standout goalie Jake Kielly a year early to professional hockey, was more than happy to bring Marotte to Potsdam, where he wound up playing nearly 98 percent of the minutes in goal for the Golden Knights.

Marotte was one of those players who got lost in the crowd during his final junior years. Had NCAA coaches been able to foresee the numbers he put up this season he would have been a highly sought-after recruit.

“Midway through my 19-year-old year I wound up playing in the CCHL (with Nepean) and finished the year and started my 20-year-old year with the same team and played a lot,” Marotte said. “I had one offer (Robert Morris) and I just took it. It was great. I don’t regret taking it, it’s been an awesome four years.”

Marotte said he never saw a Clarkson game in person growing up and the only connections he had to the Golden Knights prior to this year was going to the same school in Canada as Clarkson captain Devin Brosseau, but joining it a year later. He also competed against Clarkson forward Grant Cooper in the CCHL junior league.

“I didn’t know much (about Clarkson),” Marotte said. “It was a complete change for me, but for the best.”

Having a minor connection to Brosseau helped as he was able to learn about Clarkson by communicating with him. Eventually Marotte’s appreciation for how Jones ran the program led him to Potsdam.

“The first thing was the culture,” Marotte said. “I talked to Devin and coach Jones. It was the first thing that came to mind. Obviously they had won the last couple years, big time, and a lot of the core was coming back, too. I talked to Devin and he only had good things to say, so it made my decision really easy. It was the most important thing for me, the culture, for sure.”

Marotte was joining a team that went 26-11-2, won the ECAC Hockey Tournament title and took Notre Dame to overtime in an NCAA Tournament first-round loss. But he also was replacing one of the best goalies in Clarkson history in Kielly, who a year ago put up a 1.91 goals-against average and a .929 save percentage.

“I knew we had a good team and if I could do my job, I’d be OK,” Marotte said. “I tried not to compare myself to others too much. Jake was great, he did so many things for this program. I’m just glad I could help (Clarkson) out and keep the streak going. We are obviously different goalies.”

“A lot of old (defensemen) with a lot of experience and they were really open-minded and we talked a lot,” Marotte said. “It’s helped my game and the whole team as well.”

It didn’t take long for the fans to get excited about Marotte’s play as he went through a stretch early in the season where he gave up just four goals in four games. His season was shorter than he wanted, but he can leave the program knowing he made an impact and made some new friends on campus and in the community.

“It has to do with the town as well, a little bit,” Marotte said. “Potsdam is a little town and people really love their hockey around here. It makes it so much fun to come to the rink and people around the rink, they stop you and they talk to you and they love your game. It’s been a big change and it’s made me grow as a person. A couple students (recognize) me and tell me I had a good game and stuff like that. It’s always good to hear that. It took a couple months, I have my helmet on, on the ice, so it’s kind of tough to know who I am. People in school started talking to me a little bit more. It’s good to get them to come to hockey games.”