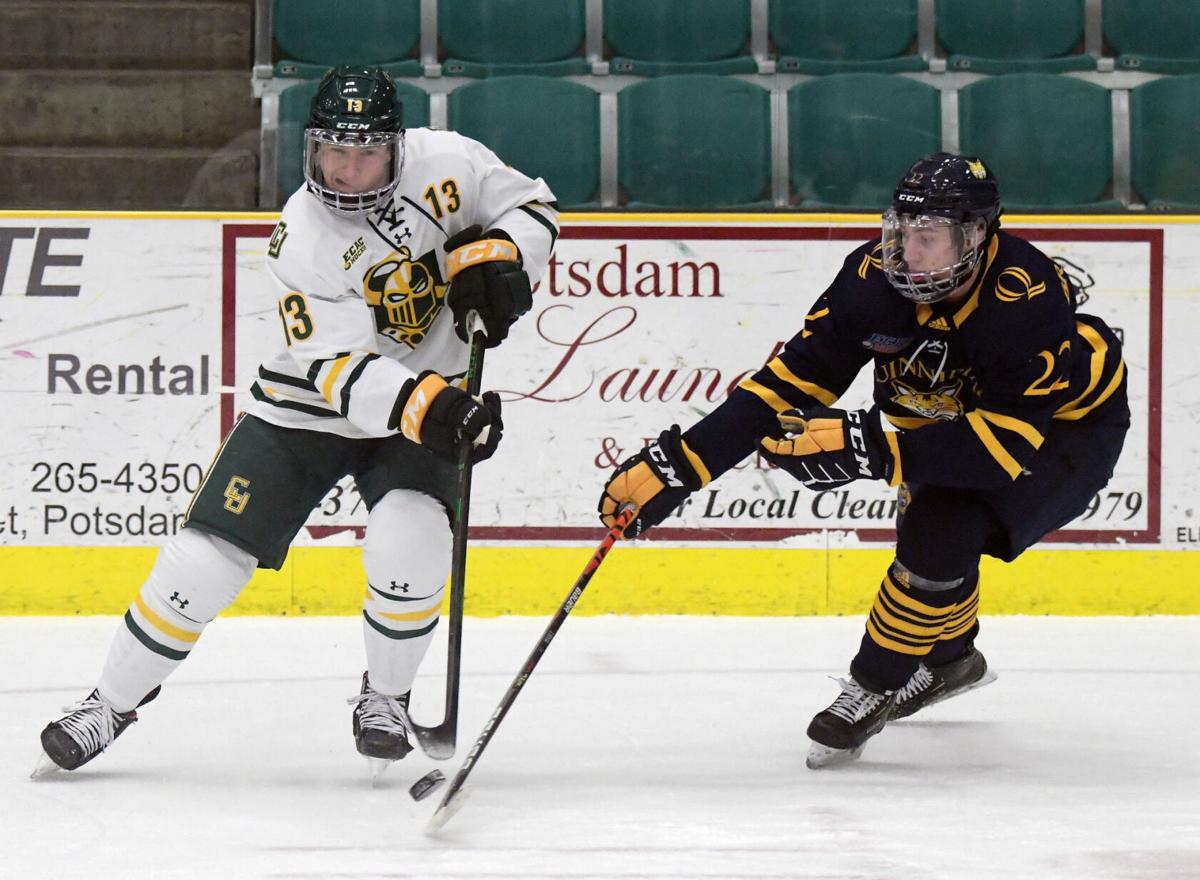 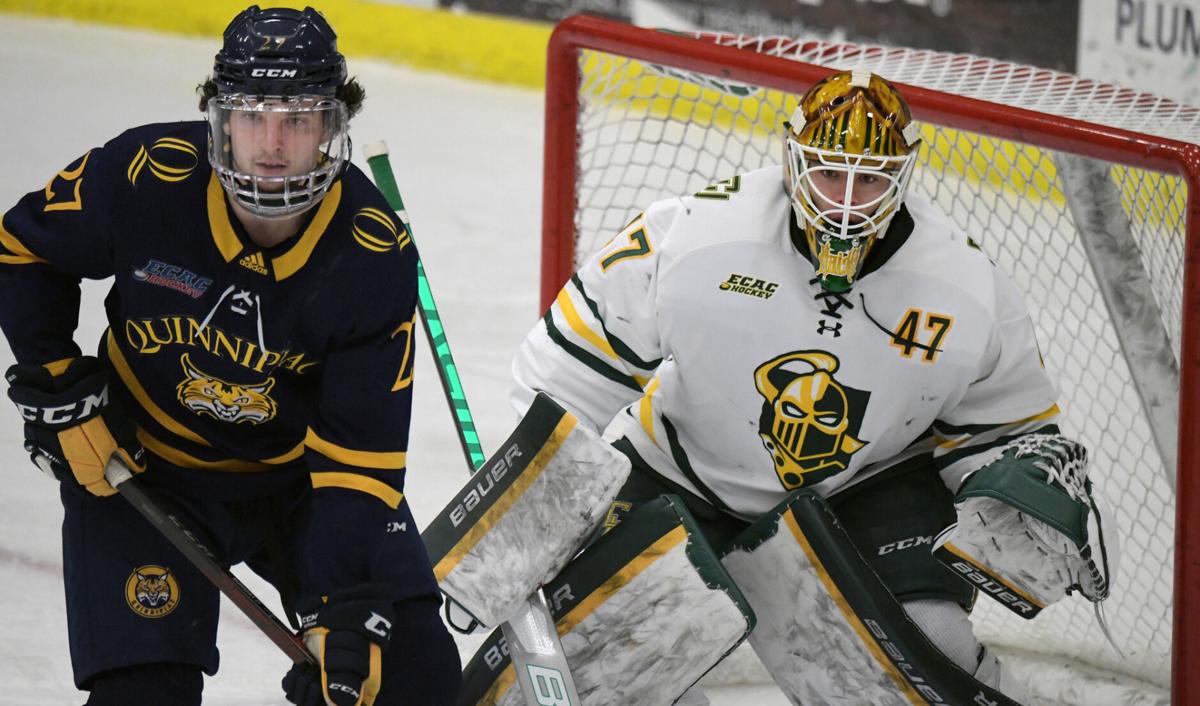 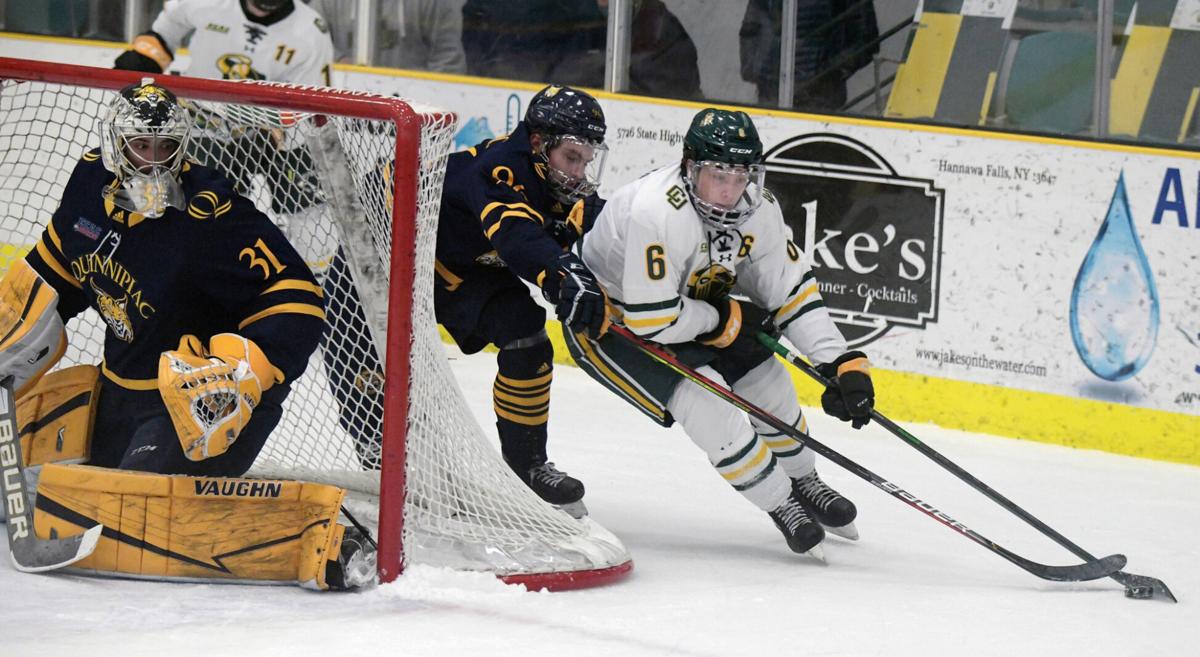 POTSDAM — If the Clarkson University men’s hockey team wants to be in first place by the end of this weekend, it will have to pick up at least a win and an overtime or shootout win in the next two games against Quinnipiac.

Quinnipiac tied Clarkson, 1-1, on Friday night at Cheel Arena and then won 2-1 in a shootout to move four points ahead of both the Golden Knights and St. Lawrence University in the ECAC Hockey standings.

“It was a slugfest there tonight,” Clarkson coach Casey Jones said. “We had our moments. It was good goaltending and good competitive hockey. I’m disappointed with the loss of a point at the end for us there.”

Jamie Collins stole a pass and sent the puck to Nick Wicks, who fed it to Gosselin in front of the net. The goal snapped a scoreless streak of 201:41 for Bobcats goalie Keith Petruzzelli.

“I just jumped on the ice and Wicks made a good play, it was a clean three-on-two and he made a great pass and I just shot it,” Gosselin said. “We played well in the first against (Petruzzelli). We just have to get more traffic and more pucks from the blue line to make life difficult for him. I don’t think we did that in the second half, really.”

The game’s next exciting moment happened with 2.3 seconds left in the second period.

Odeen Tufto was called for cross checking after a hard hit on Anthony Callin, knocking Callin into the boards. Callin picked up a slashing penalty as well.

But the hit led to a big skirmish behind the net and resulted in seven penalties being called, including an addition roughing penalty on Callin.

With two more games left to play it’s possible the intensity from that incident could carry over.

“There’s definitely something there,” Gosselin said. “We want to keep being physical. When you play the same teams over and over again it’s going to get more and more physical. You are going to start hating each other. We just have to keep our composure and stay calm and not take stupid penalties.”

Quinnipiac tied the game at 6:16 of the third period after a faceoff win with a goal from T.J. Friedmann, who re-directed a shot from Logan Britt past Clarkson goalie Ethan Haider.

After the second period, Clarkson did not put much pressure on the Bobcats. Quinnipac outshot Clarkson 12-3 in the third period and 3-0 in a scoreless three-on-three overtime.

“They are sitting on top right now,” Jones said of Quinnipiac. “The league always goes through some teams and they are one of the teams towards the top that competes on a national level every year. If you are not targeting Quinnipiac in the ECAC playoffs you will target us with our recent success. That’s just the way it’s gone. I think our league with the four teams is competitive on a night-in, night-out basis. You have to bring it.”

Each team scored once in the initial shootout round. Tufto scored on Quinnipiac’s first chance and Zach Tsekos scored for Clarkson on the Golden Knights’ last attempt.

Clarkson missed three shots in the sudden-death portion of the shootout before Peter DiLiberatore ended the game with a goal for the Bobcats.

Kalty Kaltounkova scored a power-play goal at 2:46 of overtime to lift the Raiders (9-1-1, 5-0-0) past St. Lawrence University in an ECAC Hockey game at the Class of 1965 Arena in Hamilton.

The Saints (0-2, 0-1) played their first conference game of the season and became the first team in the conference to earn a point against Colgate, which had won its first four games in regulation.

SLU sent the game to overtime when coach Chris Wells pulled goalie Lucy Morgan for an extra attacker late in the third period.

Skylar Podvey scored with 1:20 left in the game to force the tie.

Eleri MacKay scored two goals for the Raiders in the first period as Colgate built a 2-0 lead.

SLU answered with a power-play goal from Rachel Bjorgan at 19:39.5 of the opening period to cut the deficit to 2-1.