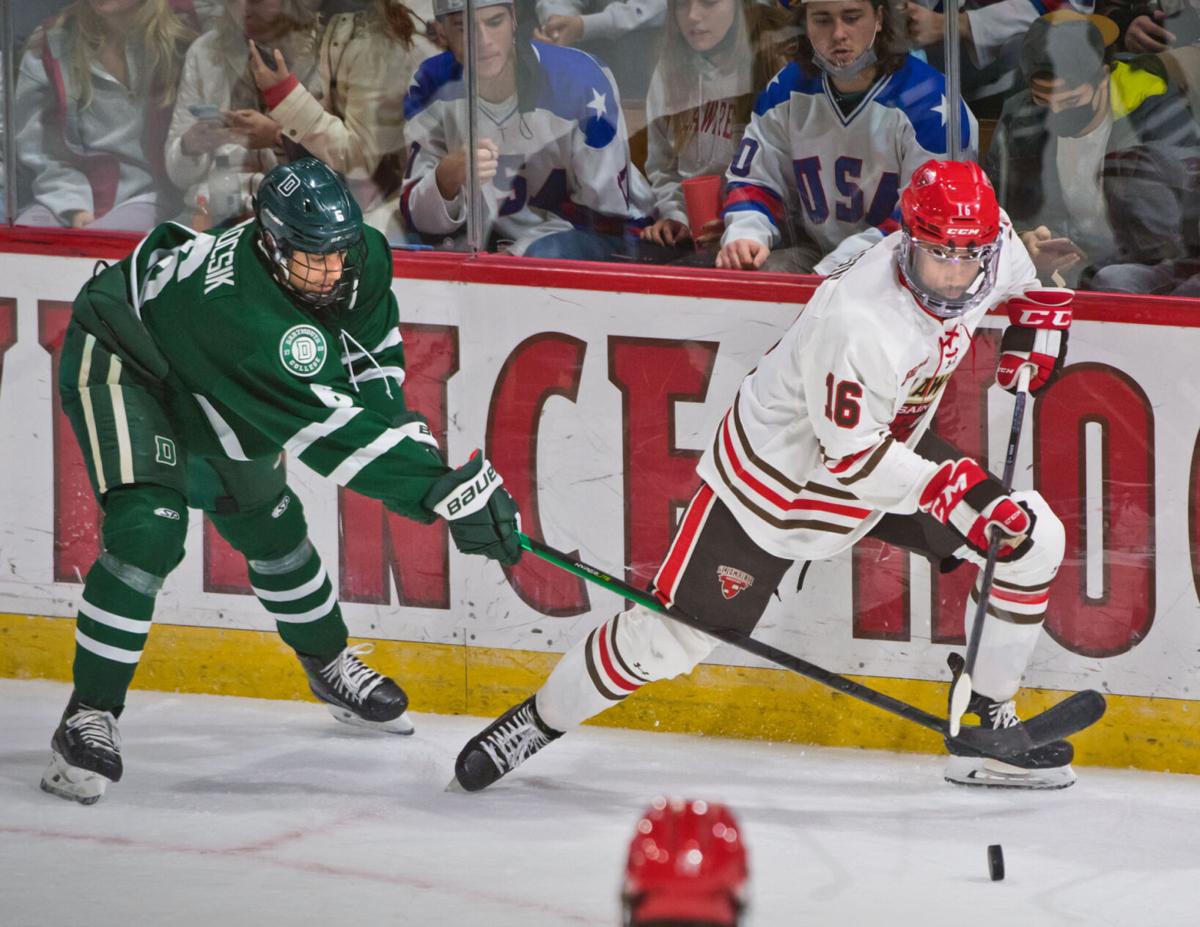 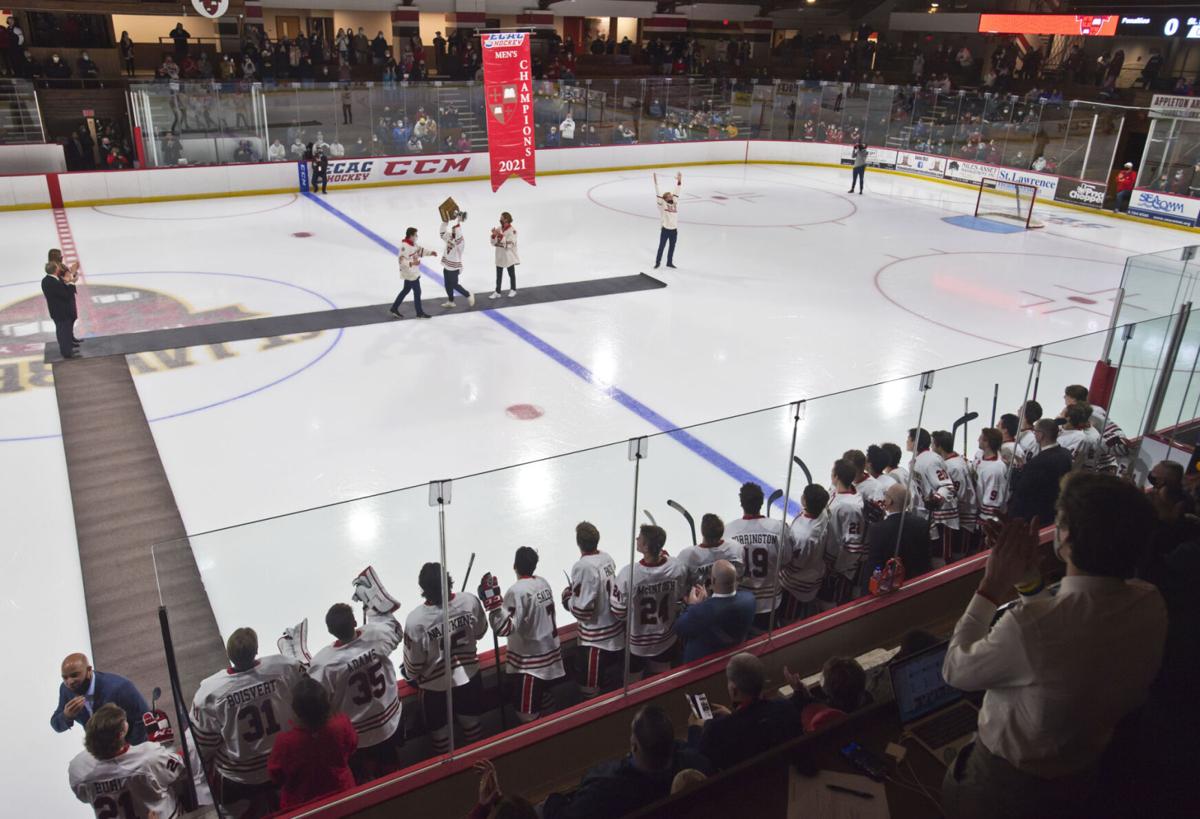 Saints past and present celebrate with their fan as the 2021 ECAC Men’s Hockey Championship banner is raised Friday at Appleton Arena. Christopher Lenney/ Watertown Daily Times 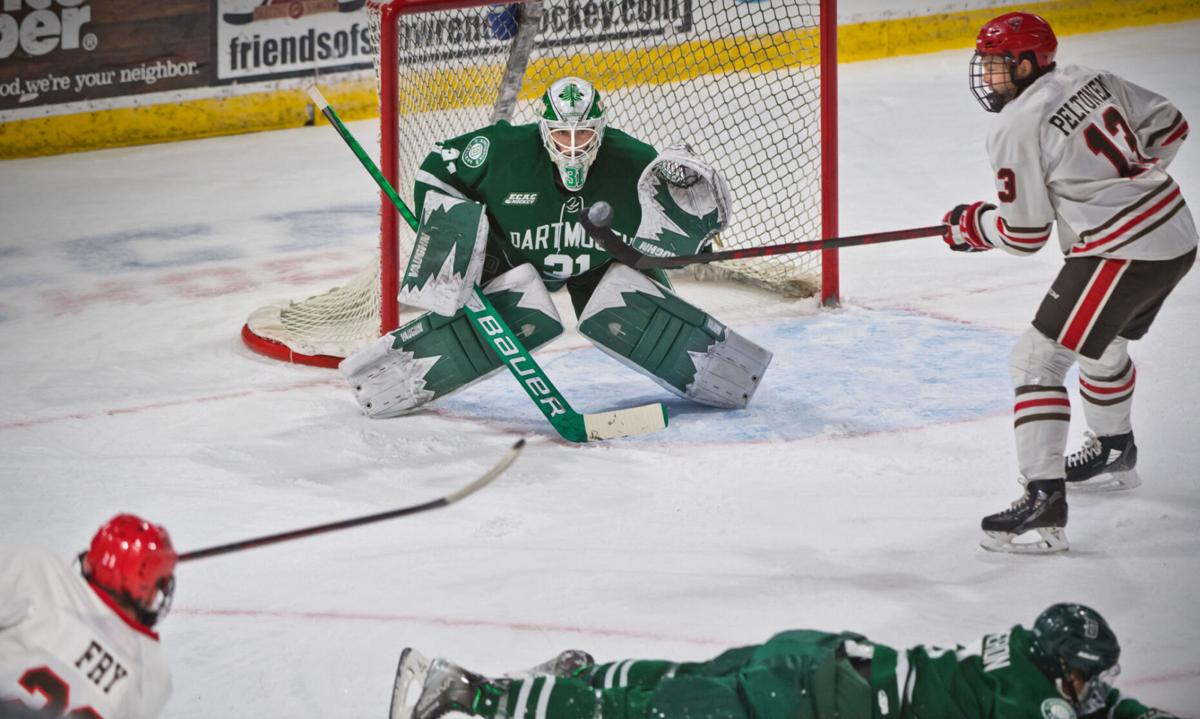 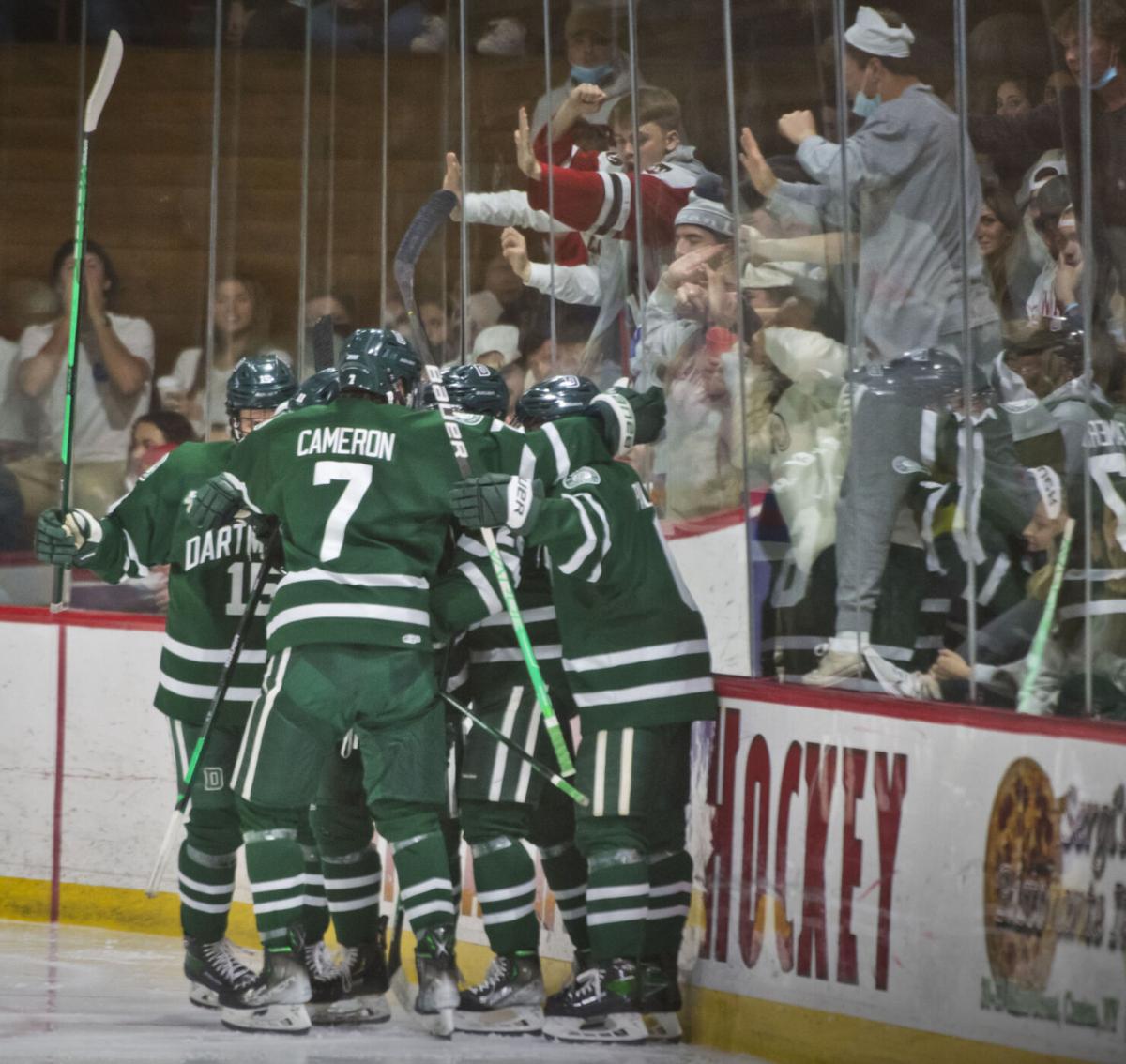 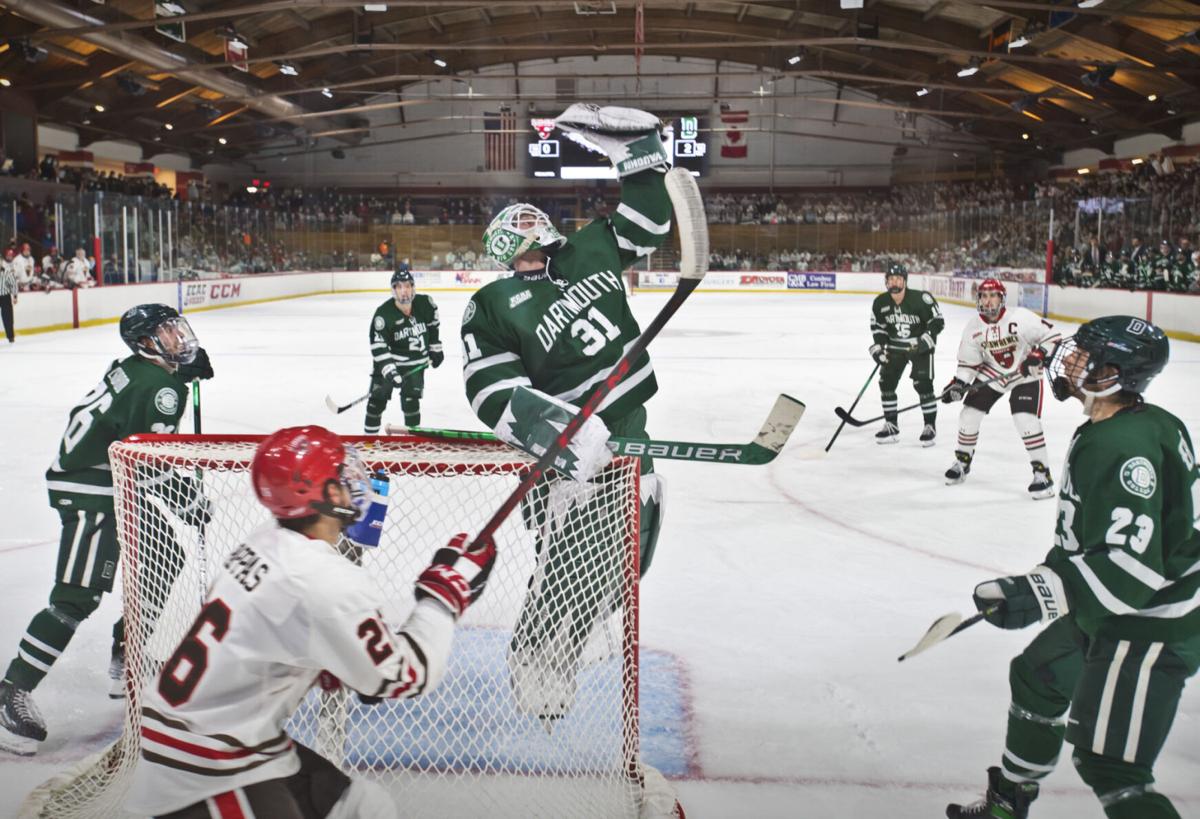 Saints past and present celebrate with their fan as the 2021 ECAC Men’s Hockey Championship banner is raised Friday at Appleton Arena. Christopher Lenney/ Watertown Daily Times

CANTON — The St. Lawrence University men’s hockey team showed its comeback ability once again Friday night, but Dartmouth answered and gained a 3-2 victory in the Saints home opener before 1,774 in an ECAC Hockey game in Appleton Arena.

“I didn’t think we made a lot of plays with the puck tonight,” Saints coach Brent Brekke said. “Our guys were anxious and nervous. Talented players are the ones who typically have a lot of poise with the puck and we were rushing plays and just turning pucks over.”

The Big Green scored the final goal of the game at 11 minutes, 19 seconds of the third period on a shot from the circle by Jack Cameron.

“It was just resiliency,” said first-year Dartmouth coach Reid Cashman, a former Quinnipiac standout defenseman. “It’s early, but we’ve kind of been doing it all year. We need to learn how to play with a lead, but to be resilient enough to come back and score that third goal and hang on at the end was awesome.”

Last weekend SLU fell behind 2-0 at Rensselaer before rallying for a 4-3 win.

The Saints trailed 1-0 at Union before producing a 2-2 tie and the winning in a shootout the following night.

SLU was buoyed by a boisterous, full student section Friday and used the momentum from that, as well as the banner ceremony, to control the first period, outshooting the Big Green 15-4.

“I thought our student section was awesome,” Brekke said. “It’s been a long time since our students were in the building, out in full force, which was great. It was a good boost.”

But Dartmouth started the second period strong, scoring just 40 seconds in on a shot from Mark Gallant for a 1-0 lead.

Dartmouth’s Sam Hesler made it 2-0 with another goal at 6:46 of the period.

“They were on us all night,” Cashman said of the Saints. “They are so well-coached, they play their butts off. Our penalty kill gave us a chance (5-for-5) and our goaltender (Justin Ferguson) gave us a chance.”

SLU’s comeback started 68 seconds into the third period with a goal from Ashton Fry, with Aleksi Peltonen assisting.

“We talked in the locker room about coming in and playing the same way we had been playing all game,” Fry said. “We just needed some energy there. My linemate, Peltonen, made a great play to the net and I was fortunate enough to bang it home and get the momentum. Luckily we got the one right after and we were rolling.

“We have a lot of confidence in ourselves here. There was a lot of positivity in the locker room between every period. If we are up two, down two, we are going to come out and play relentless either way.”

Thirty-seven seconds after Fry’s goal, Luc Salem tied the game 2-2 on a rebound of a shot by Chris Pappas with Justin Paul also assisting.

Ferguson got out of position after making the initial save and Salem aim his shot at a wide-expanse of net.

“We were just feeding off that (crowd) energy and got two quick goals and it’s too bad we couldn’t find the third one,” Salem said. “It came out to me from the corner, Justin Paul fed me out front. I noticed the goalie was kind of sliding from the post so I tried to go five-hole because his legs were open.

“The crowd was awesome. Every time there was a good hit or a block it was awesome to hear the fans. Last year it was just kind of us making our noise on the bench and trying to get each other going.”

n NOTE: Former SLU players Dylan Woolf, Eddie Pavlini and Callum Cusinato, along with sophomore Greg Lapointe, who is battling cancer, took part in the banner-raising ceremony, with Lapointe bringing the championship trophy out onto the ice.

The Golden Knights (5-4-1, 1-2) scored four goals in the second period and went on to defeat Harvard in an ECAC Hockey game before 2,526 at Cheel Arena.

Dornbach scored another goal in the third period for Harvard to cut the lead to 4-2.

Campbell scored his second goal of the game and Zach Tsekos closed out the scoring for Clarkson.