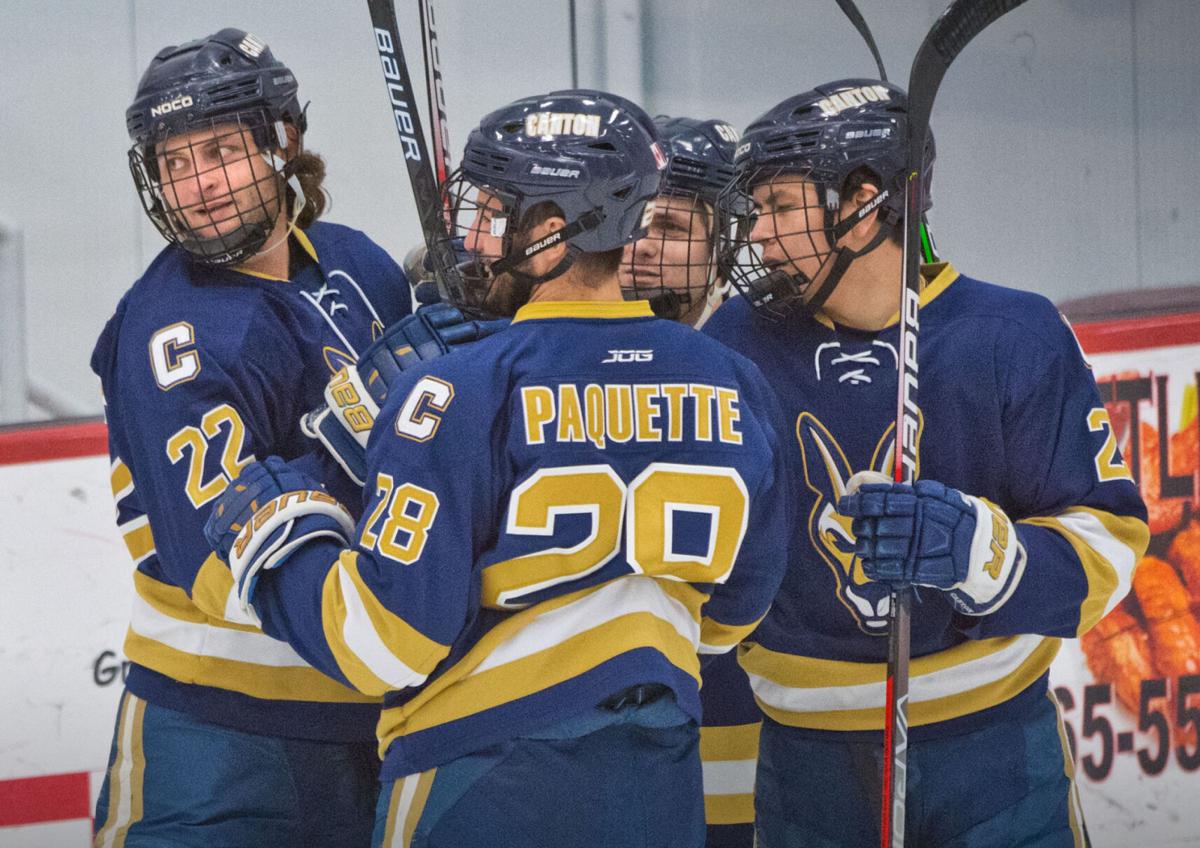 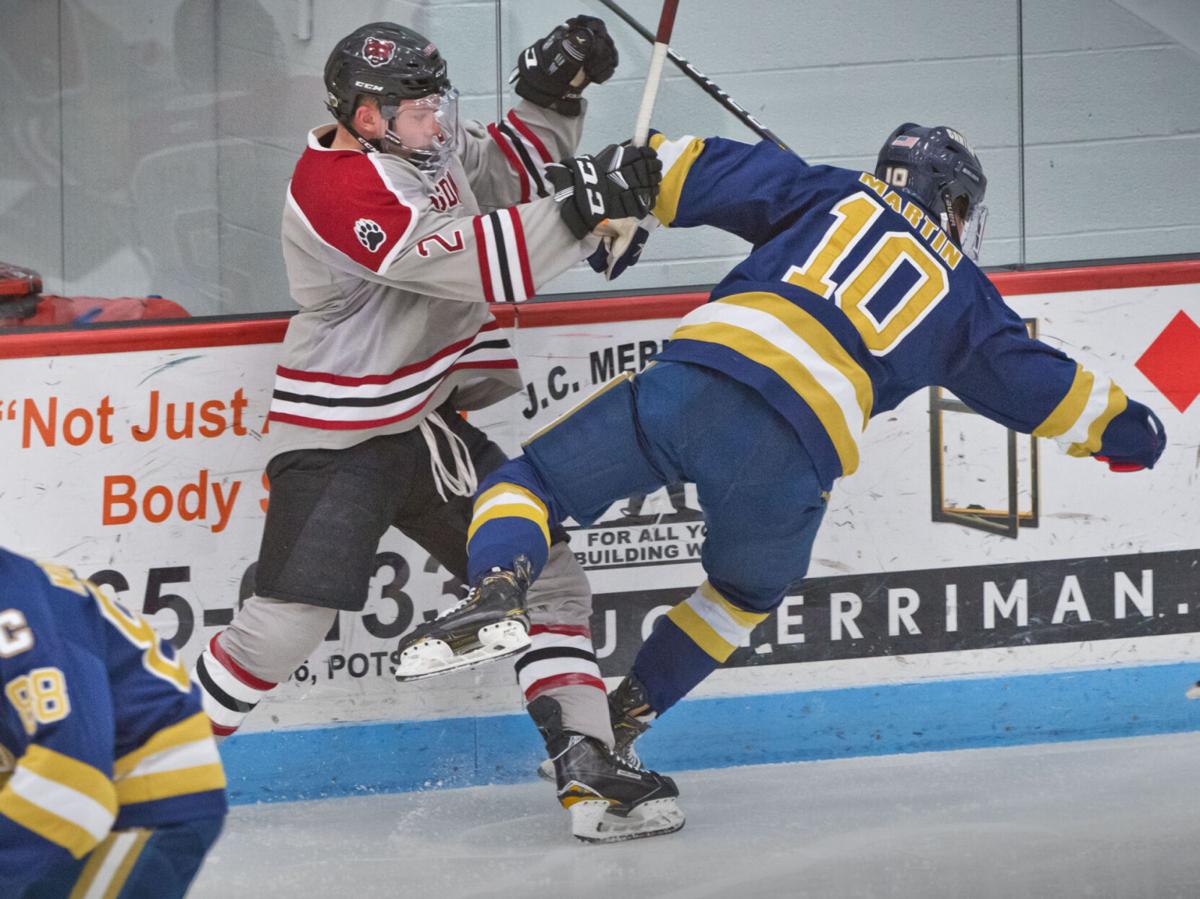 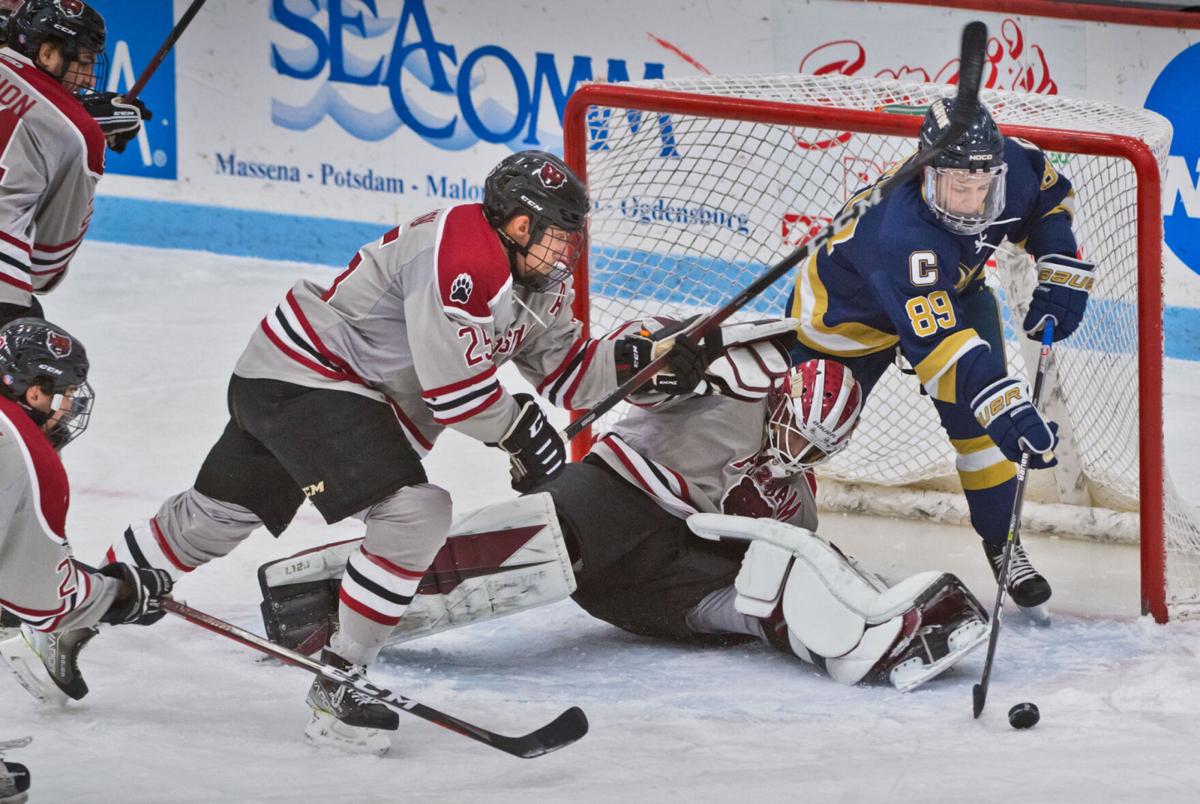 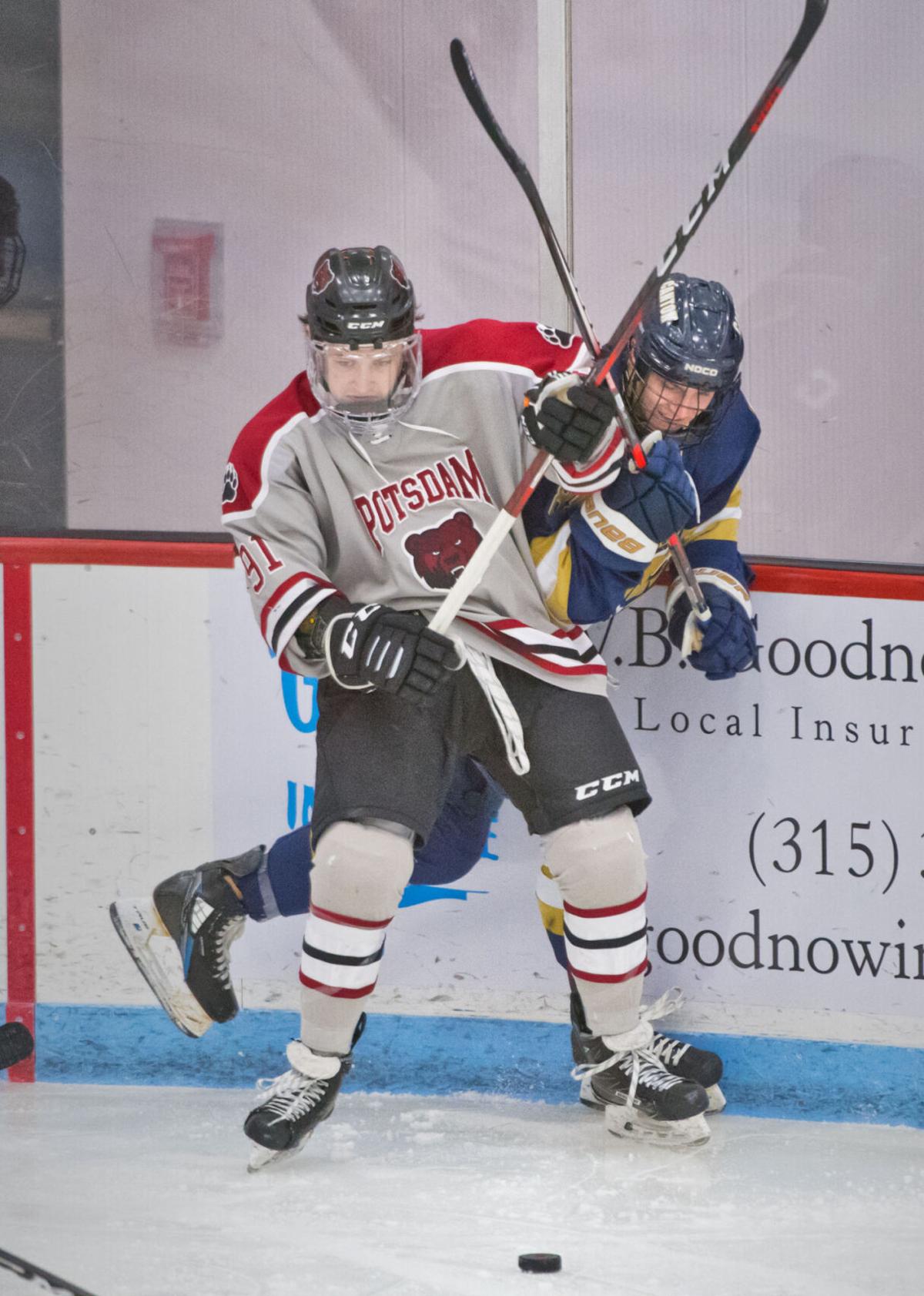 SUNY Potsdam, dealing with COVID-19 issues and injuries, dressed 15 skaters and two goalies in the contest and four of the skaters were playing their first career game.

“We never want to accept losing,” said Bears coach Chris Bernard, a former St. Lawrence Central and Clarkson player. “The bottom line was, I’m really proud of the effort. A couple bad bounces and our power play didn’t execute. It’s hard when you don’t have your normal personnel. Credit Canton, they were opportunistic and scored when they had to.”

SUNY Canton coach Alex Boak, another former Clarkson player who also played for Norwood-Norfolk, knew what Bernard was going through, but he also knew that SUNY Potsdam is a rivalry game and he wants to win every time his team faces the Bears.

“We hung in there,” Boak said of the Kangaroos (5-6-1). “I thought we kind of took our foot off the pedal a little bit. Chris was playing short of guys tonight and they did a great job hanging in there with what they had. We took advantage of the chances that we had and we wore them down in the third (period) a little bit better, making them work.

“These (games) are circled. Potsdam is right down the road. I treat it like a Clarkson/St. Lawrence rivalry. I don’t want to lose to these guys. I have full respect for their program, their coach and their players, but in terms of our program, I want to beat them.”

SUNY Canton got off to a strong start, scoring just 55 seconds into the game on a quick wrist shot from behind the circle by Jesse Farabee.

The Bears answered late in the first period when Justin Geary scored during a scramble in front of the net at 16 minutes, 1 second to tie the game 1-1.

SUNY Canton took the lead for good when another former Norwood-Norfolk skater, Jake Mayette, took a pass from Filip Jakobsson, skated in front of the net and beat Bears goalie Michael Paglucca at 8:32 of the second period.

“We took advantage of opportunities tonight and scored goals when we had to,” Mayette said. “I really didn’t do much (on the goal). Jakobsson, my linemate, gave me the puck and I put it away. I couldn’t miss that one.”

The Kangaroos built a 3-1 lead at 2:58 of the third period when Canton native Sam Martin scored a power-play goal.

“It’s definitely a rivalry but today was a lot different because they were down guys,” Martin said. “We had to stick to our game plan and we did. Growing up around here, Canton/Potsdam is always a rivalry. I’ve been doing it for years.

“I thought all four lines moved the puck pretty well. We got up and down the sheet well.”

SUNY Canton closed out the scoring with a shorthanded goal from Brendan Morrow at 8:20 of the third period.

The Kangaroos finished with a 31-22 edge in shots, which included a 20-11 margin over the final two periods.

Despite the losses, and low numbers, Bernard is happy with the attitude of his team and the Bears will try to respond tonight when the teams meet again at 7 p.m. at Maxcy Hall.

“These guys want to come to work every day,” Bernard said. “We’re ready to play and the kids are eager. Our record is poor, but we’re not embarrassed about it because we are trying hard.”

The Bears scored four of the first five goals to knock off the Mustangs in an NEWHL game in Morrisville.

Allie Davidson, Pippy Pritchard and Kendra Johnston picked up goals for the Mustangs (4-7-1, 2-4-1).

Mariah Benavides led Clarkson with 19 points in a Liberty League win over Bard in Annandale-on-Hudson.