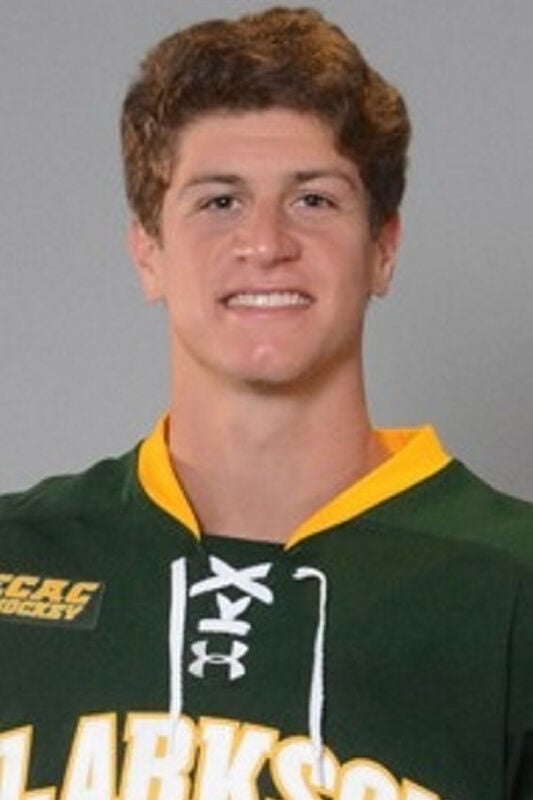 Zach Tsekos scored at 3 minutes, 41 seconds of overtime to give the Clarkson men’s hockey team a 5-4 win over Quinnipiac in an ECAC Hockey game Friday night at the People’s United Center in Hamden, Conn.

The winning goal started when Jack Jacome gained position just outside the crease and took a shot that was stopped by Bobcats goalie Keith Petruzzelli.

Jacome got the puck back, saw Tsekos just to the side of the crease and set him a pass.

Earlier in the game it did not look like Clarkson would need any dramatic moments to win the first of a three-game set of games this weekend.

The teams meet again at 7 p.m. tonight and close out the series at 4 p.m. Sunday.

Clarkson struck for three goals in the first 7:34, at one point chasing Petruzzelli out of the net for about two minutes.

Luke Mobley started the scoring for the Golden Knights with a rebound goal just 3:17 into the game.

The initial shot was taken by Grant Cooper, who received a pass from Tsekos.

Quinnipiac’s Michael Lombardi turned the puck over in his own zone that led to an unassisted goal from Jacome at 4:04 to make it 2-0.

At that point Bobcats coach Rand Pecknold replaced Petruzzelli with Evan Fear, but after 2:02 he took Fear out and put Petruzzelli back in to finish the game.

Less than a minute after Petruzzelli was back in, he gave up his third goal on a shot from Nick Campoli from the top of the circle at 7:34 with Nick Wicks picking up the assist.

The Bobcats got one goal back at 17:19 of the opening period with a power-play goal from Peter DiLiberatore on a shot from between the circles. That goal snapped a streak of 14 straight penalty kills for Clarkson.

The Golden Knights answered with a power-play goal from Anthony Callin on a rebound at 11:01 of the second period to go up 4-2. Jordan Power and Brian Hurley assisted on the goal.

Clarkson mishandled a puck in its own zone that resulted in Quinnipiac’s Christopher Fillion scoring at 15:57 from a shot between the circles to cut the deficit to 4-3. Desi Burgart stole the puck and fed Fillion with the pass.

Clarkson was about to go on a penalty early in the third period, but the Bobcats were able to tie the game while playing with an extra skater, as Clarkson had to touch the puck for play to stop and the power play to begin.

Clarkson did not take its first shot on goal of the third period until the 14:54 mark and finished with just one.

Shortly after overtime began Clarkson had about a minute of power-play time after a late Bobcat penalty and wound up outshooting Quinnipiac 5-0 in the extra period.

The win was Clarkson’s fourth straight against the Bobcats and fifth in the past six meetings.