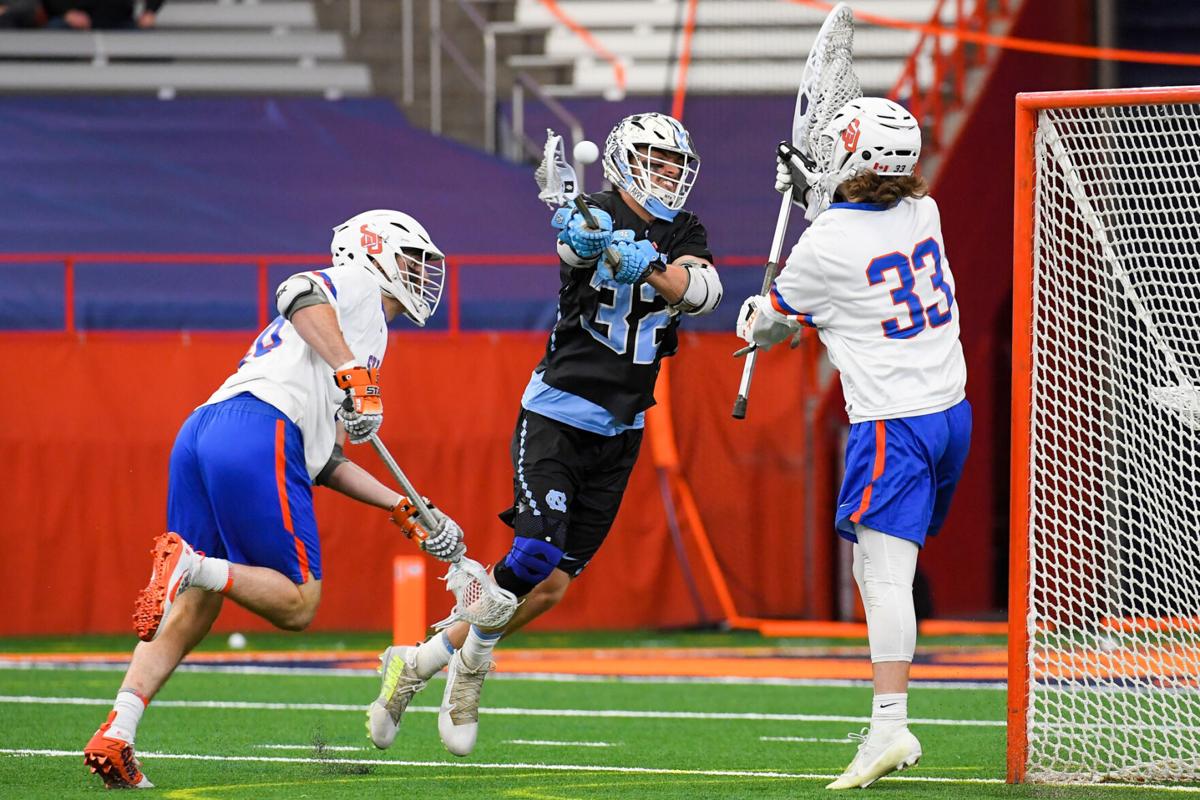 North Carolina’s Connor McCarthy takes a shot on Syracuse’s Drake Porter and scores during the first half Saturday at the Carrier Dome. Rich Barnes photo 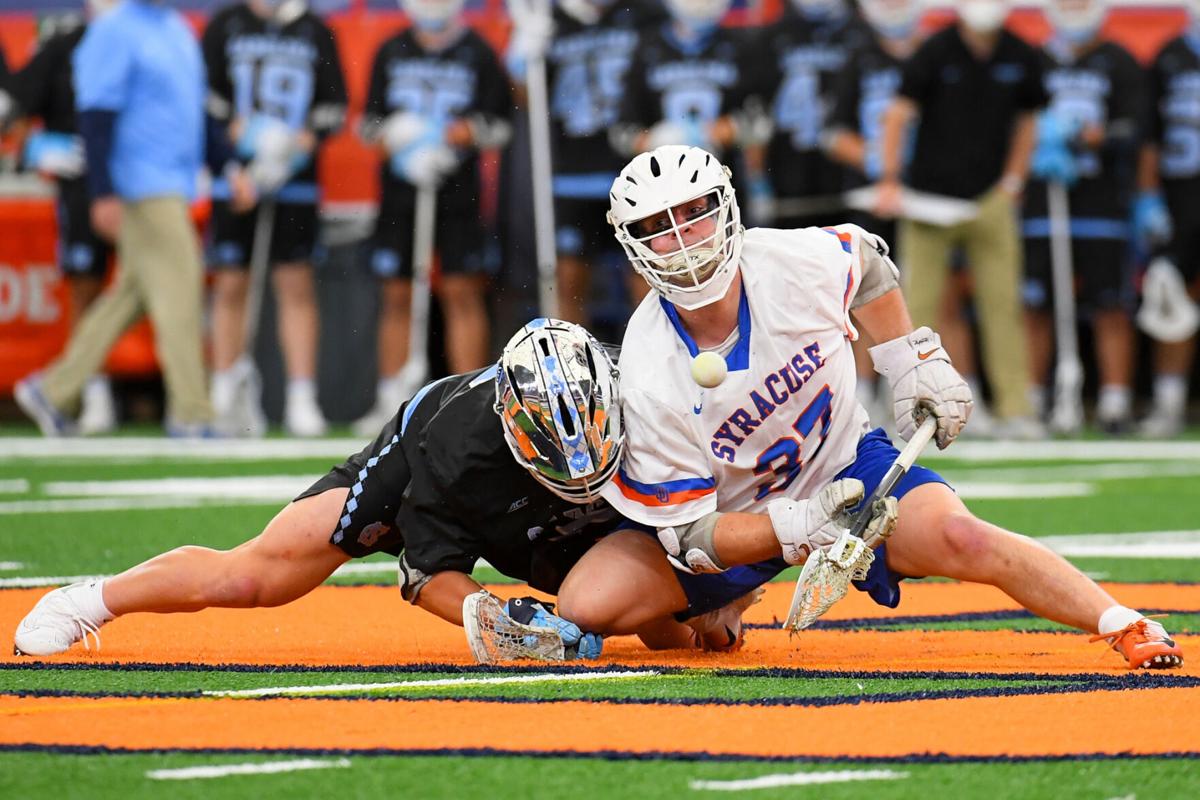 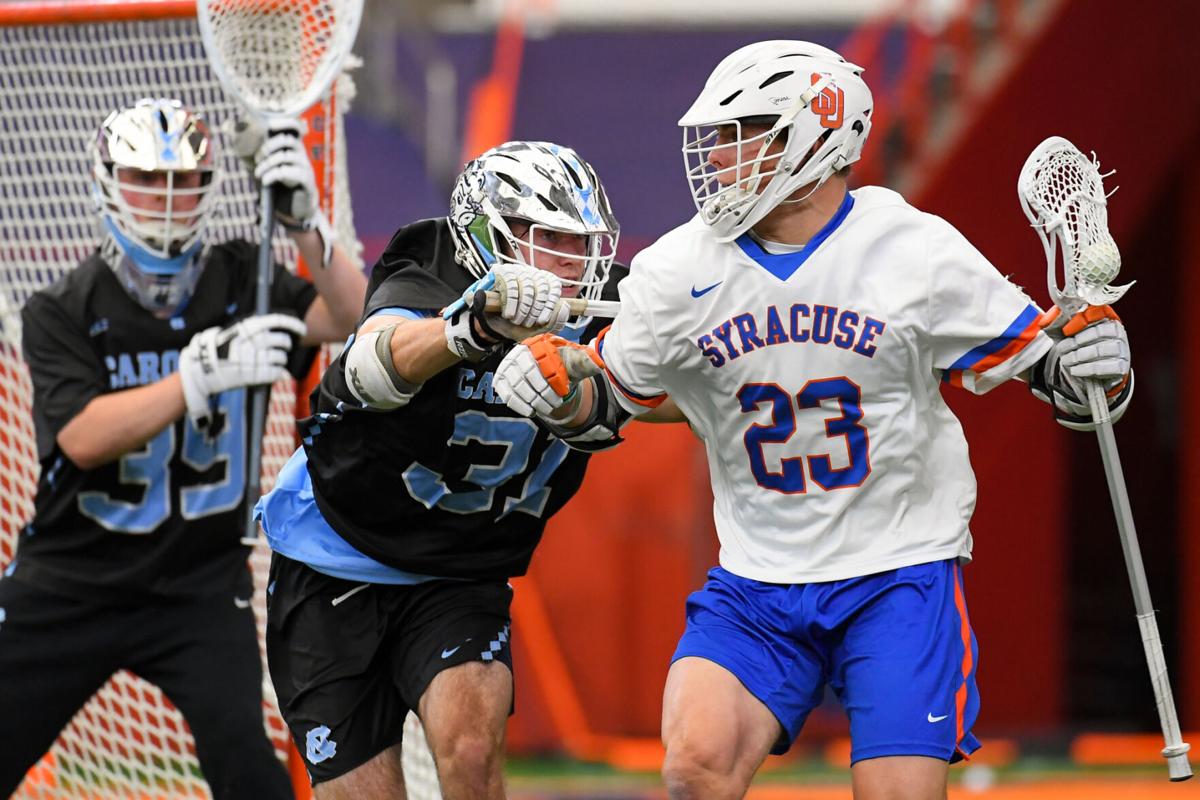 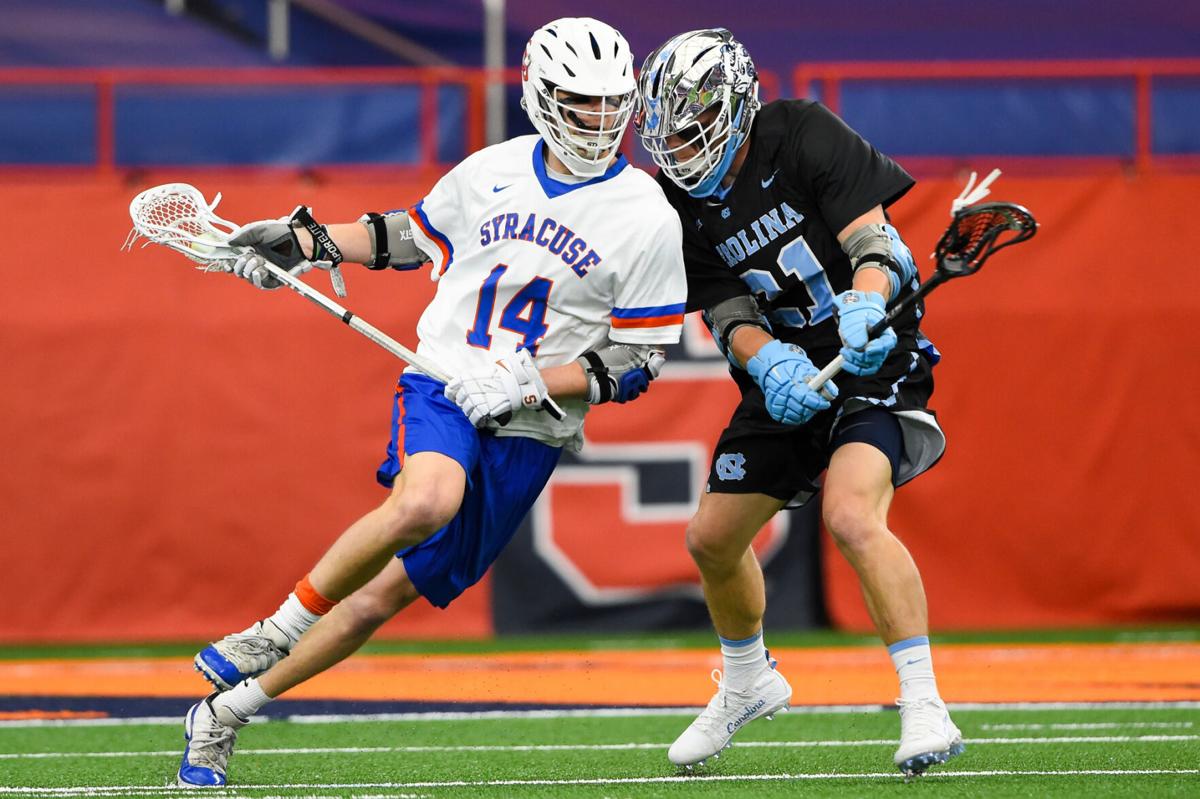 North Carolina’s Connor McCarthy takes a shot on Syracuse’s Drake Porter and scores during the first half Saturday at the Carrier Dome. Rich Barnes photo

SYRACUSE — The Syracuse University men’s lacrosse team welcomed off-campus fans back to the Carrier Dome for its final home game on Saturday, but North Carolina quickly negated their chances to provide a boost.

Senior attackman Chris Gray finished with two goals and six assists to lead the fifth-ranked Tar Heels to an overpowering 21-9 victory over the No. 9 Orange on Senior Day in the Dome.

The Atlantic Coast Conference matchup was played in front of a reduced crowd of 683 fans permitted to attend in socially distant groups due to state COVID-19 restrictions.

The game marked the first played with the general public in attendance, and just the second SU sporting event to permit fans since the start of the COVID-19 pandemic last March.

The SU women’s lacrosse team allowed fans in attendance last Saturday to end a 405-day period of games played in front of mostly empty seats in the Dome. The previous few lacrosse games were open to a limited number of students only.

“It’s always special to have fans in the Dome, we have such great fans, but I think this game it was obviously a little more special having fans in here for the first time and for the vast majority of the fans, it was our parents and our loved ones,” said SU redshirt sophomore Tucker Dordevic. “So that made it even more extra special, the fact that we got to look up in the stands and see mom and dad watching us play after such a long break.”

Gray — UNC’s preseason All-American and Tewaaraton Award candidate — scored twice in the first quarter to spark North Carolina to five unanswered goals to begin the game. The Tar Heels raced out to a 4-0 lead within the first five minutes and maintained a comfortable edge for the rest of the way to improve to 9-2 overall and 2-2 in the ACC.

Gray added two early assists to spark a 7-1 advantage after the first quarter and a 12-4 halftime edge.

The lopsided outing — which ended as SU’s lowest scoring output along with the most goals they have allowed all season — broke from recent history as four of the previous five games in the series were decided by a single goal.

“It was a combination of things, they got a few goals off the faceoff, they got a few off rebounds where we made the save and it came out, a couple missed slides, and a couple where the recovery didn’t find the open man,” SU coach John Desko said of his team’s defensive miscues. “When I watch the film and see all their goals, it’s going to be a number of things.”

Dordevic scored four goals to lead SU (5-4 overall, 1-3 ACC), which lost for the third time in its last four games.

Senior attackman Stephen Rehfuss added a goal to go with three assists, while senior midfielder Jamie Trimboli tacked on a pair of goals for SU. Rehfuss registered his 100th career assist after entering the game with 98 and became the 10th player in program history to reach the milestone.

The Orange will need to bounce back quickly with two road games left against elite ACC teams — next Saturday at third-ranked Virginia and May 1 at No. 2 Notre Dame.

“I think everybody just has to look themselves in the mirror personally, and kind of nitpick themselves and see what they have to do to get better,” Dordevic said. “Our coaches are going to watch film all night, I’m sure, and come to us with a good game plan to work on this week.”

Freshman goalie Collin Krieg made 13 saves and allowed eight goals for the Tar Heels, while Connor McCarthy scored three goals as one of eight UNC players to contribute multiple goals and one of 12 players to tally at least one.

Syracuse celebrated its 16 seniors prior to the game by introducing them to the crowd as prerecorded messages from their respective families played on the video board.

All are eligible to return next year due to the NCAA allowing an extra year of eligibility as a result of the uncertainties surrounding the COVID-19 pandemic.