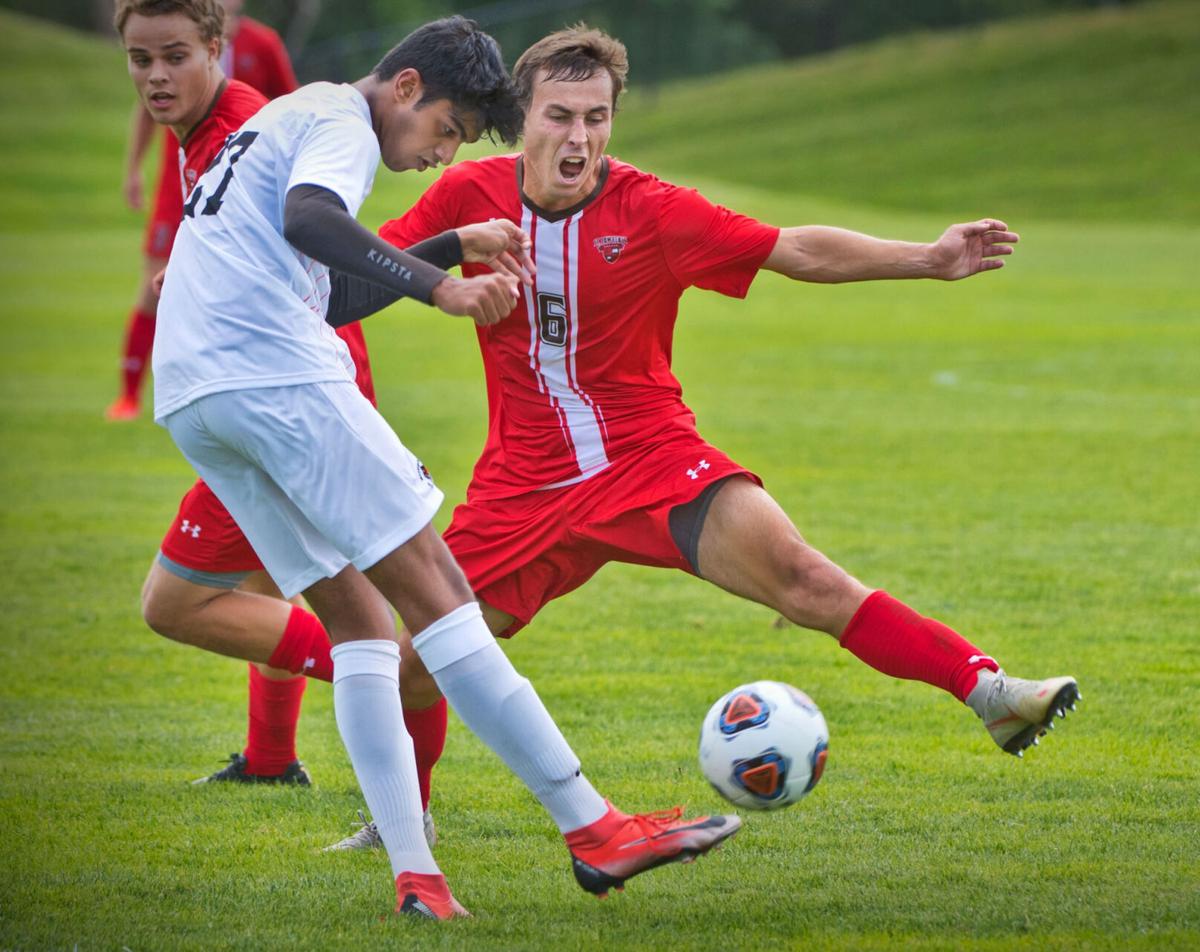 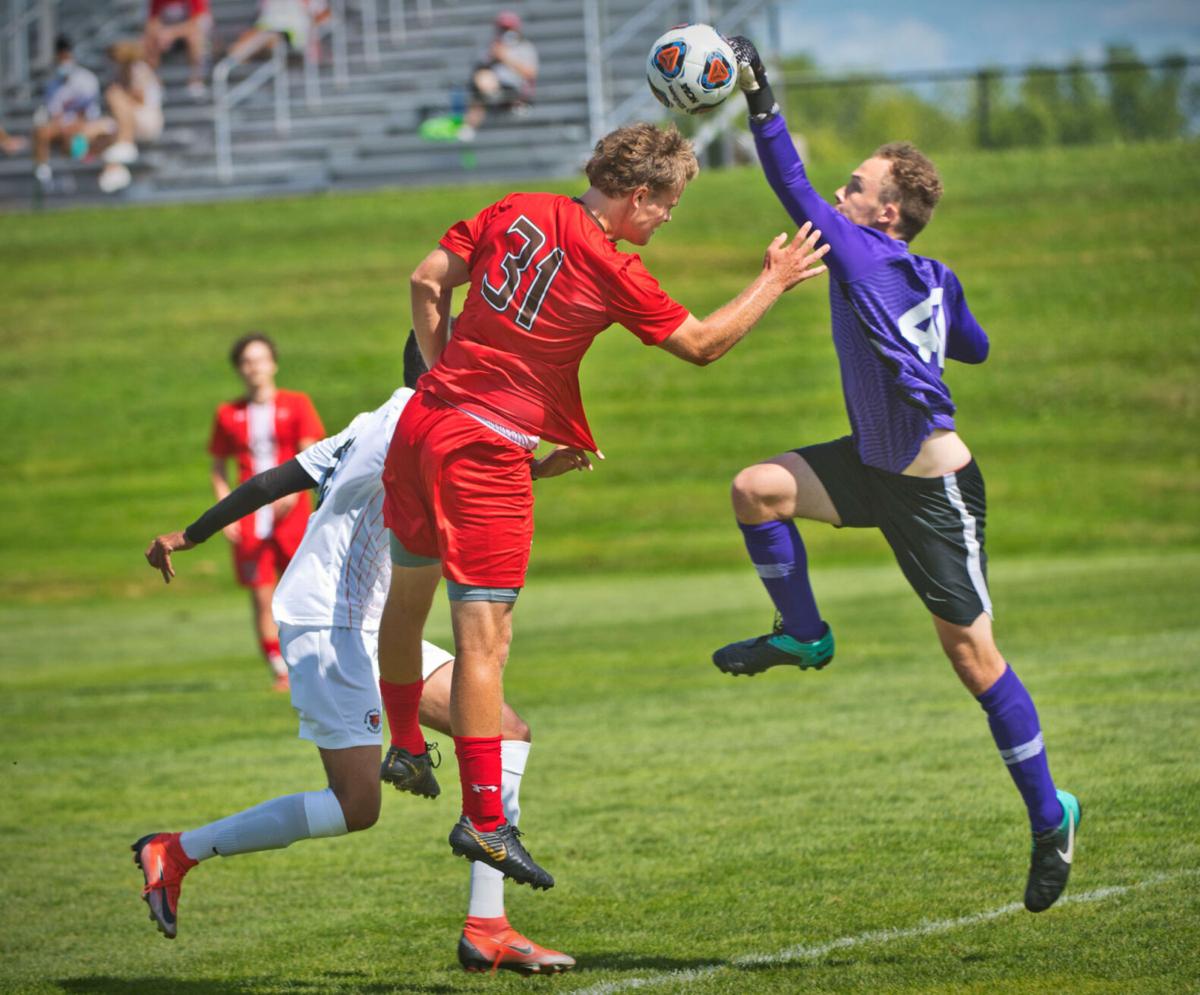 St. Lawrence’s Parker Hotchkiss tries to get his head on the ball before Buffalo State goalie Max Shoemaker can clear it Saturday. Christopher Lenney/Watertown Daily Times 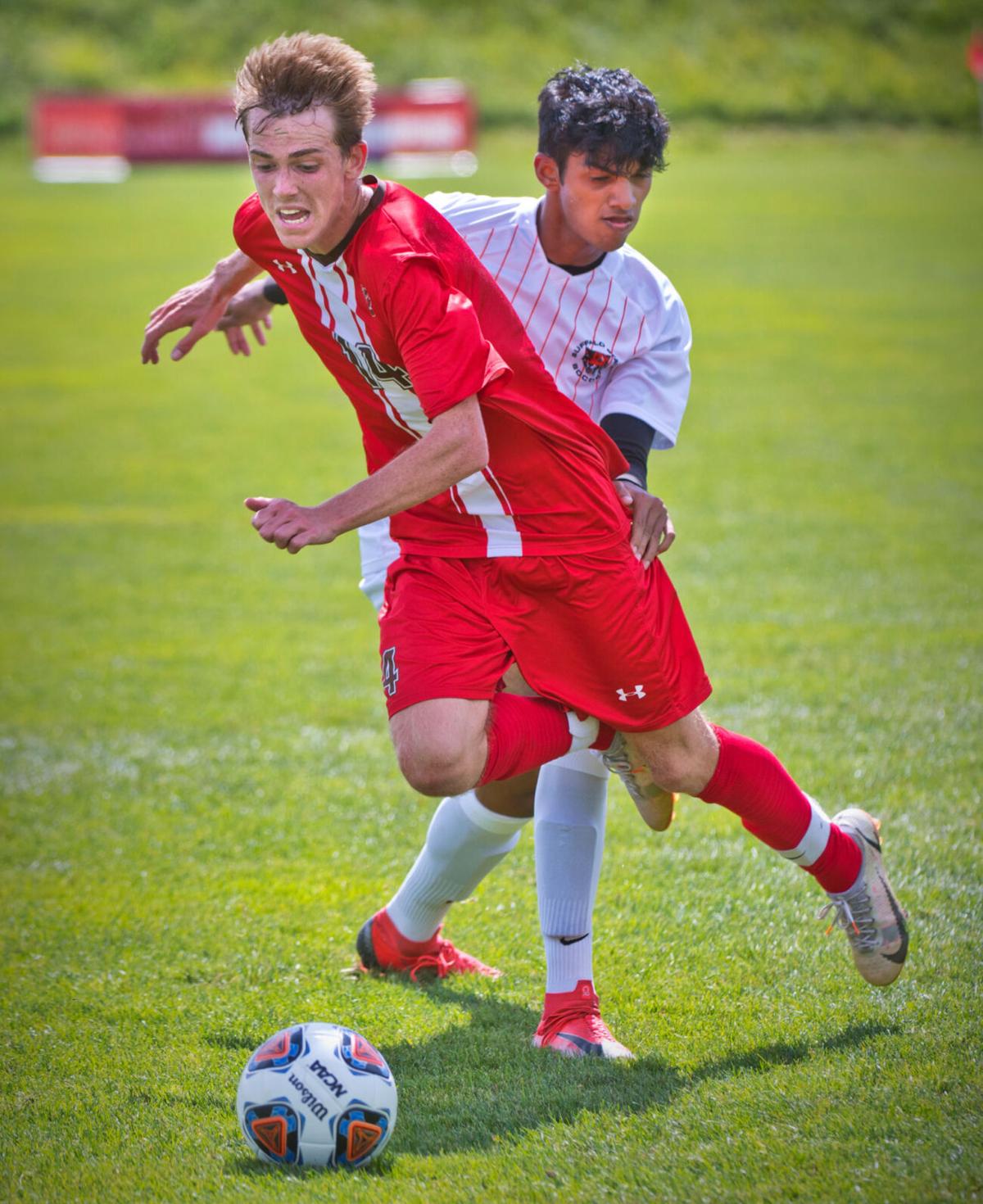 St. Lawrence’s Parker Hotchkiss tries to get his head on the ball before Buffalo State goalie Max Shoemaker can clear it Saturday. Christopher Lenney/Watertown Daily Times

The Saints showed in their opener Saturday that they may be back to the form the program is known for with a 3-1 victory over Buffalo State in a nonconference game at Sandy MacAllaster Field.

SLU played without returning leading scorer Marvin Sibanda, who was injured, and faced a Bengals squad that went 15-2 in 2019, scoring 54 goals and allowing just 16.

“It was a really good performance,” Saints coach Mike Toshack said. “We showed some depth. We weren’t afraid to play a lot of young kids. It’s really a good young team. We showed resolve. That’s the competition we have all week (in practice). It’s tough for (starting) places and it paid off.

“You knew they were going to have most of their team back from that 15-2 team. For me, the eye on the prize is at the end of the year. If you keep ducking everybody, you are not going to get better. We were able to play a lot of young kids against a team like that.”

Each team struggled in the first half, playing their first game after such a long span without competition.

SLU’s first goal came after Bengals goalie Max Shoemaker came out of his own net in the eighth minute and bumped into SLU’s Robert Reynolds.

Reynolds had the ball and simply turn around and kicked it into an empty net.

“Scrappiness in the first goal is why we have Robert Reynolds up front,” Toshack said. “He feeds off stuff like that.”

The Bengals took advantage of a similar break to score an own goal in the 14th minute.

SLU’s Antonio Rogliano tried to kick the ball back to his own goalie, Ben Woelfinger. Woelfinger was not expecting the pass and it was not accurate. He tried to move toward the ball but couldn’t get his footing and it went into the net.

Momentum changed in the 47th minute when Buffalo State freshman Musa Abdulla picked up his second yellow card of the game, resulting in his ejection and the Bengals playing one man short the rest of the way.

“The red card changed things,” Toshack said. “When red cards happen you see teams don’t take advantage of it. We did. We possessed the ball and made them chase us. I thought we managed the game really well with the lead.”

The Saints took the lead for good on a direct kick from Michael McDougald in the 50th minute.

McDougald was pushed from behind just outside the Buffalo State box by Adam Saif, resulting in the direct kick, which he sent right to an empty corner of the net.

Rogliano made up for his earlier miscue in the 61st minute when he sent a nice pass to Parker Hotchkiss, which resulted in a goal, making it 3-1.

“I saw the midfielders working really hard,” Hotchkiss said of his goal. “They caused a turnover and I just finished it off. It was all a product of their hard work.”

The season is opening with the traditional North Country Classic, which is not exactly a tournament, but features Clarkson and SLU swapping opponents in the first weekend of the season.

SUNY Geneseo will face the Saints at 3:30 p.m. today and Clarkson will host the Bengals at 2:30 p.m.