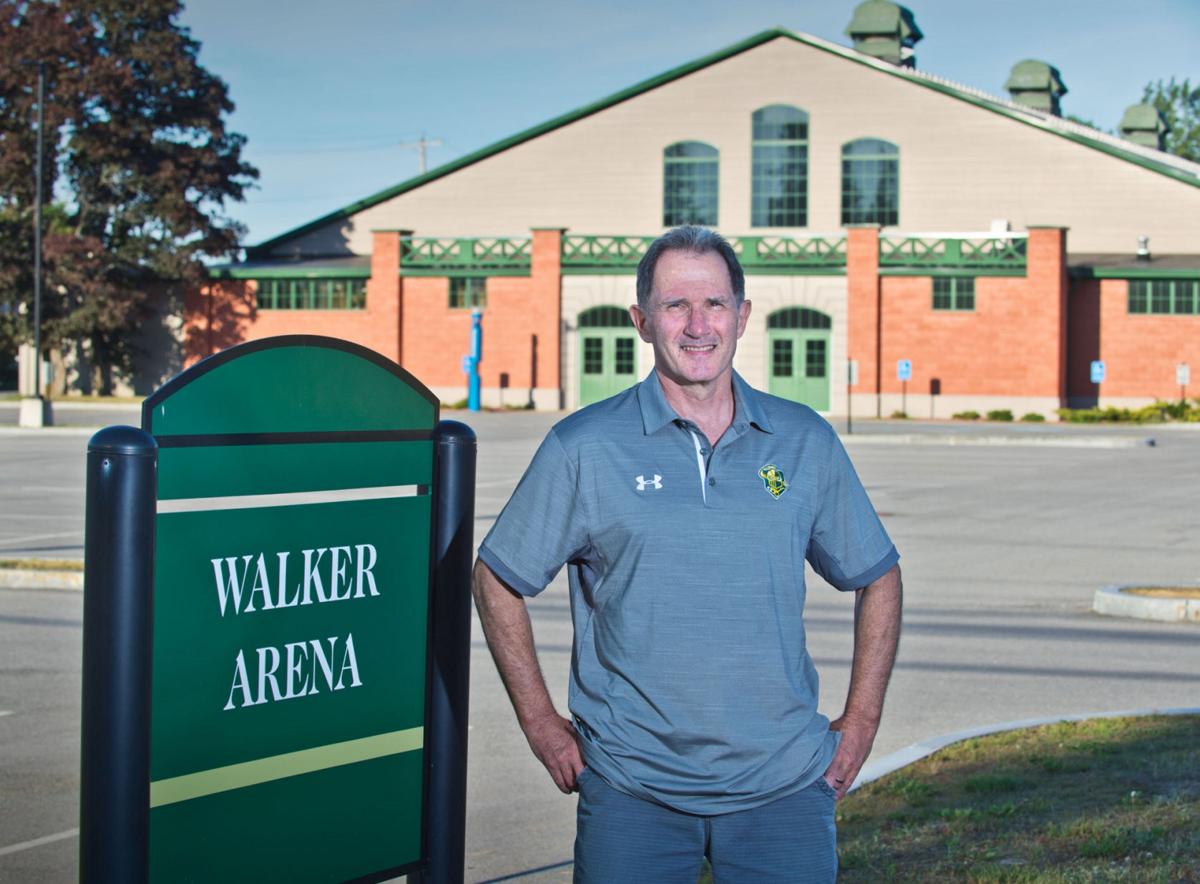 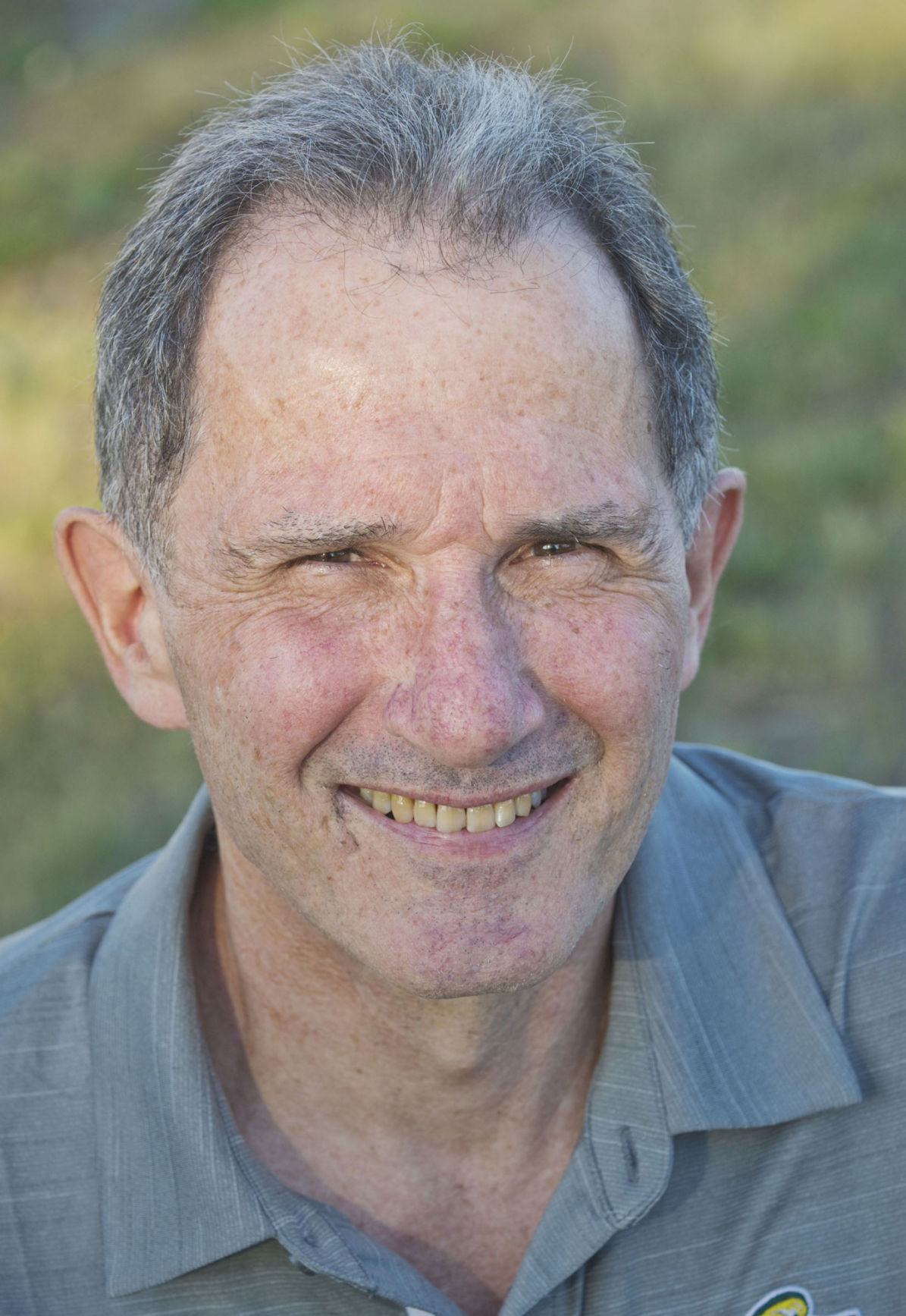 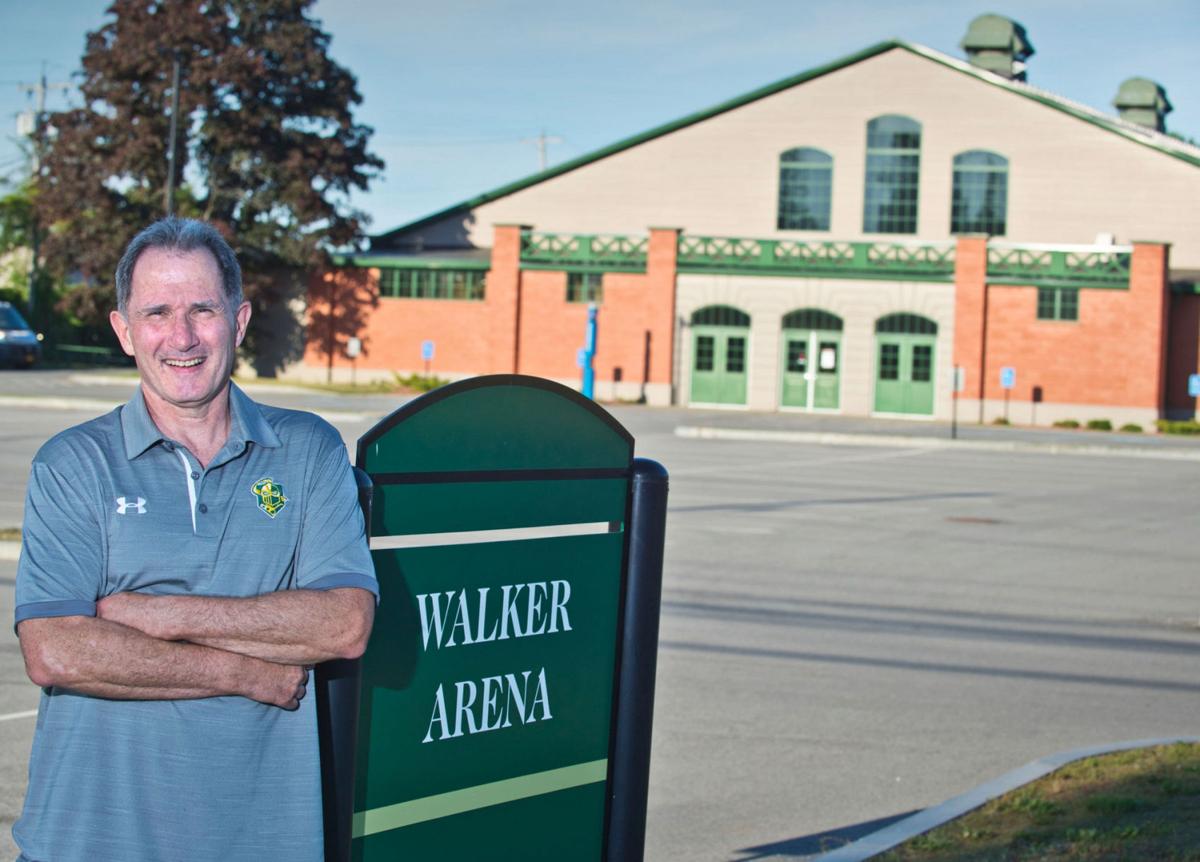 Clarkson Sports Information Director Gary Mikel is retiring after a 38-year career at the University. Mikel’s favorite memory of the Walker Arena era is the playoff series sweep of Wisconsin, the final games played in the building. Christopher Lenney/ Watertown Daily Times

Clarkson Sports Information Director Gary Mikel is retiring after a 38-year career at the University. Mikel’s favorite memory of the Walker Arena era is the playoff series sweep of Wisconsin, the final games played in the building. Christopher Lenney/ Watertown Daily Times

POTSDAM — In the realm of perpetual change that is collegiate athletics, Gary Mikel has been one of the few constants at Clarkson University for the past 38 years.

“Gary and I began our professional athletic careers at Clarkson together back in 1982. Since that time, Gary and I have not only been colleagues, but friends,” said Scott Smalling, who took over as athletic director at Clarkson last July. “We have seen college athletics grow tremendously over the years and through it all, Gary has remained a consummate professional.”

For Mikel, his career at Clarkson will come full circle at the end of June when he steps down from his position as the first full-time sports information director at the university, then continuing in mid-August when he returns as a part-time visual arts advisor.

“I’m not looking at it like I’m really retiring. I’m just scaling things back and they’re letting me come back in an advisory role. I guess I’d have to say that I’m going to be semi-retired,” said Mikel, a Rochester native who graduated from Greece Olympia High School in 1976 and eventually earned a degree in photography from the Rochester Institute of Technology. That came three years after he was originally hired to take pictures for the Clarkson public relations department on a part-time basis in 1981.

“I had some health issues my final year at RIT and wasn’t able to finish getting my degree on schedule,” noted Mikel, who has battled chronic ulcerative colitis since he was a teenager. “I was sitting in the job placement office at RIT and I was leafing through some of the folders. I saw an add for a part-time photo guy at Clarkson and decided to apply. I got the job and a year later, they had an opening for the SID job, which was also part-time back then. They decided to combine the two jobs into one full-time position and I wound up getting it.”

“I didn’t really know how to type and my background was more in photography but I’ve always had an interest in sports,” he added.

When Mikel started as SID in 1982, he was solely responsible for the gathering of results and statistics from the various teams fielded by the university then relaying that information to the various media outlets in the north country.

“Being Division I, men’s hockey played a primary role in the winter but I had to work on getting information for all our teams,” he said.

“Personal computers were just getting on board back then and weren’t much help yet,” he added. “I wasted a lot of time in my office waiting to get calls from our coaches when they were on the road. I would have to write everything down then call the local newspapers and radio stations to give them the information. There were a lot of long hours and long nights.”

Through the next five decades, Mikel managed to navigate his way through the steady advances made in media technology that began with the introduction of fax machines in the late 1980s and continues today with the internet.

“I remember when fax machines were a big deal. Now look where are,” said Mikel, who worked to develop the department’s first web site in the late 1990s. “During hockey games at Walker, we had a phone up in the press box with a list of all the press boxes for the other schools in the ECAC. We got updates by calling all the different rinks. Fax machines came along, so we did everything by fax for a while. We still have the list of fax numbers taped to the back wall at the press box in Cheel.”

“These days, with smart phones and laptops, all you have to do to find something out, is push some buttons,” he added.

Mikel, who earned his degree from RIT in 1984 by taking transferable courses at Clarkson, has also witnessed first-hand the rise to national prominence of the men’s and women’s hockey programs at Clarkson as well as major upgrades and renovations to the university’s facilities and playing fields, starting with the opening of Cheel Arena in October of 1991, and continuing more recently with the transformation of Hantz Field, which is used by the soccer and lacrosse programs, from natural grass to synthetic turf in the fall of 2009. Jack Phillips Stadium at Snell Field also received major improvements in 2009 while the newly-formed women’s softball team began playing in 2013 on what is now Scott Field.

“I made my first trip to the NCAAs with men’s hockey in 1984. The first round was ‘total goals’ back then and we had to play at Minnesota-Duluth. We wound up losing by one goal but that was a great experience,” said Mikel, who went on to list the 1990-91 season as being even more memorable.

That year, the Golden Knights led the ECAC regular season standings and went on to win the playoff tournament in Lake Placid for the first time since 1966.

“Clarkson was always good but hadn’t had a lot of success in the ECAC tourney and I’d never seen them go past the first round of the NCAAs. After we won ECACs, we hosted Wisconsin, which was defending national champion, and beat them in two straight. Those wound up being the last games played at Walker Arena,” Mikel said. “After that we had to go to Michigan to play Lake Superior State. When we first got there, the folks there were all really nice to us. We came out and won the first game and they weren’t so nice to us anymore. Then, they won the second game and everyone was nice again. It was a best-two-out-of-three series and we came out and won the third game. Things turned the other way again and we had to have a police escort out of town.”

“We went back to Minnesota to play Boston University in the semifinals and I remember Mike Casselman coming out and scoring a goal in the opening minute. We sort of ran out of gas after that and wound up losing by quite a bit,” he added. “That was the last season for hockey at Walker Arena. I was there for eight years. It was a great building and I have a lot great memories from a lot of great games played there. We went 18-0-1 at home that year so that was a great send-off for the rink.”

“We’re going into our 17th year for women’s hockey and they’ve won three national championships in the last six years,” he said. “To see the team go from being built from the ground up to being regular contenders in the ECAC and at the national level is just amazing.”

Clarkson presently fields 19 intercollegiate teams, with all but men’s and women’s hockey competing in Division III. As SID, Mikel has been mainly responsible for producing and providing all the information associated with the hockey teams, including media guides and game programs. Since the late 1990s, Tommy Szarka, who is the first full-time Sports Information Associate Director at Clarkson, has been in charge of keeping track of the Division III squads. Mikel and his department have also consistently relied on the efforts of student interns in amassing the game stats and results that ultimately find their way onto the athletics web site.

“One thing I can definitely say is that, I wouldn’t have lasted here 38 years if it wasn’t for Tommy,” Mikel said.

But Smalling said Mikel can take credit for the success of the office.

“Clarkson Athletics has been fortunate to have had someone as dedicated as Gary in this position and his historical knowledge of our department is second to none,” Smalling said.

Szarka will continue in his role as the associate SID, concentrating on the Division III sports while Josh Bartell, a former hockey player at Clarkson who currently serves as the Director of Cheel Arena, has been named to fill the vacancy left by Mikel and will continue to be responsible for men’s and women’s hockey. Isaac Beckstead is presently serving as the sports information intern.

By becoming an advisor to the sports information department, Mikel will be returning to the same visual arts roots that first brought him to Clarkson and hopes to take full advantage of the advances made in the field over the past 38 years.

“Before digital cameras came around, I might shoot a couple rolls of film at a game and I’d be happy if I had three of four pictures that were worth printing. Now, I pretty much know right away if I have something that I can use,” said Mikel, who is scheduled to be back on the Clarkson athletics department payroll starting Aug. 13 as part-time photographer and videographer. “I’ll be able to work more with video than I did before and with all the changes in that technology, I’m looking forward to that.”

“I’ll definitely be more in my comfort zone in my new role,” he said.

Mikel resides in Norwood with his wife, Kate, and two step-daughters, Abby and Ally Tessier.