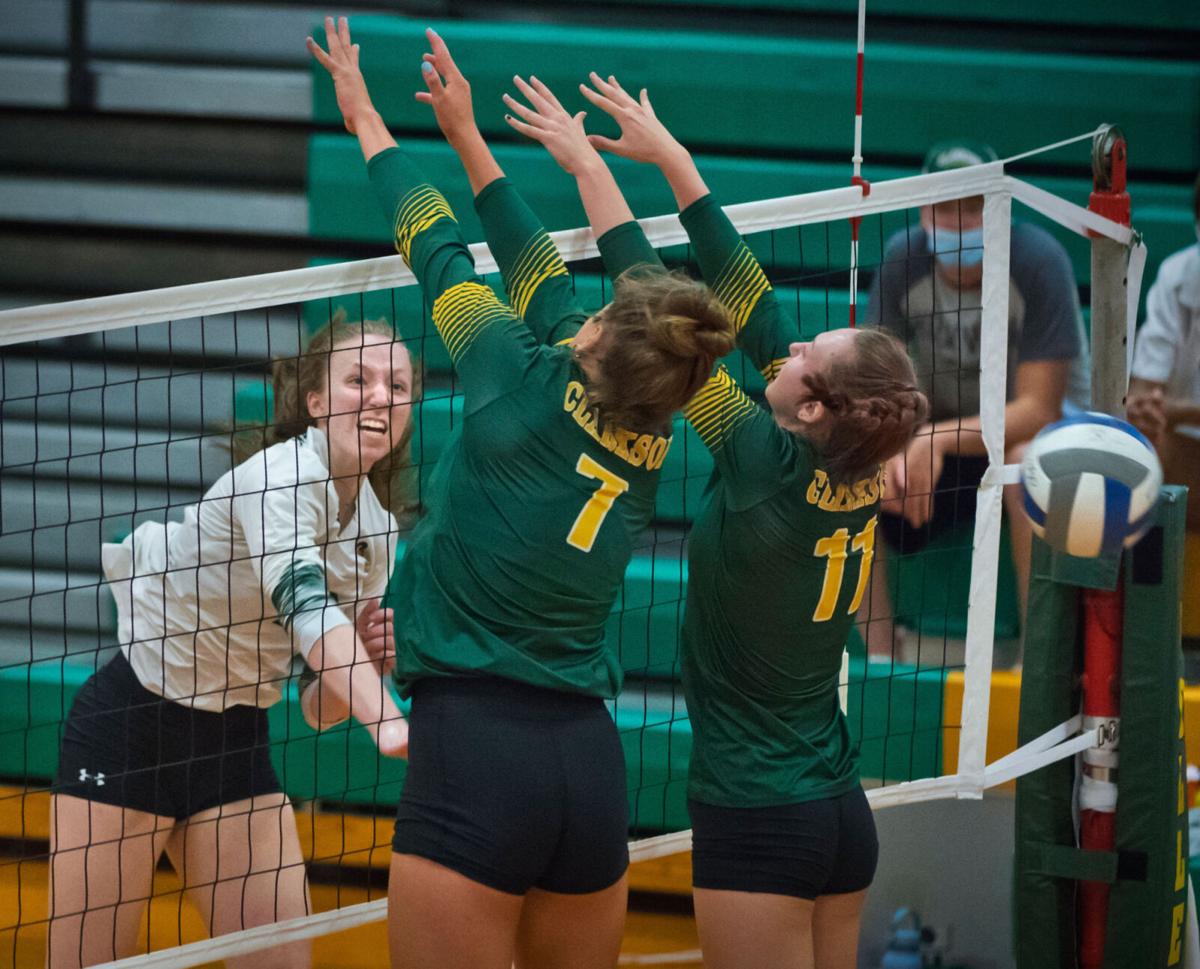 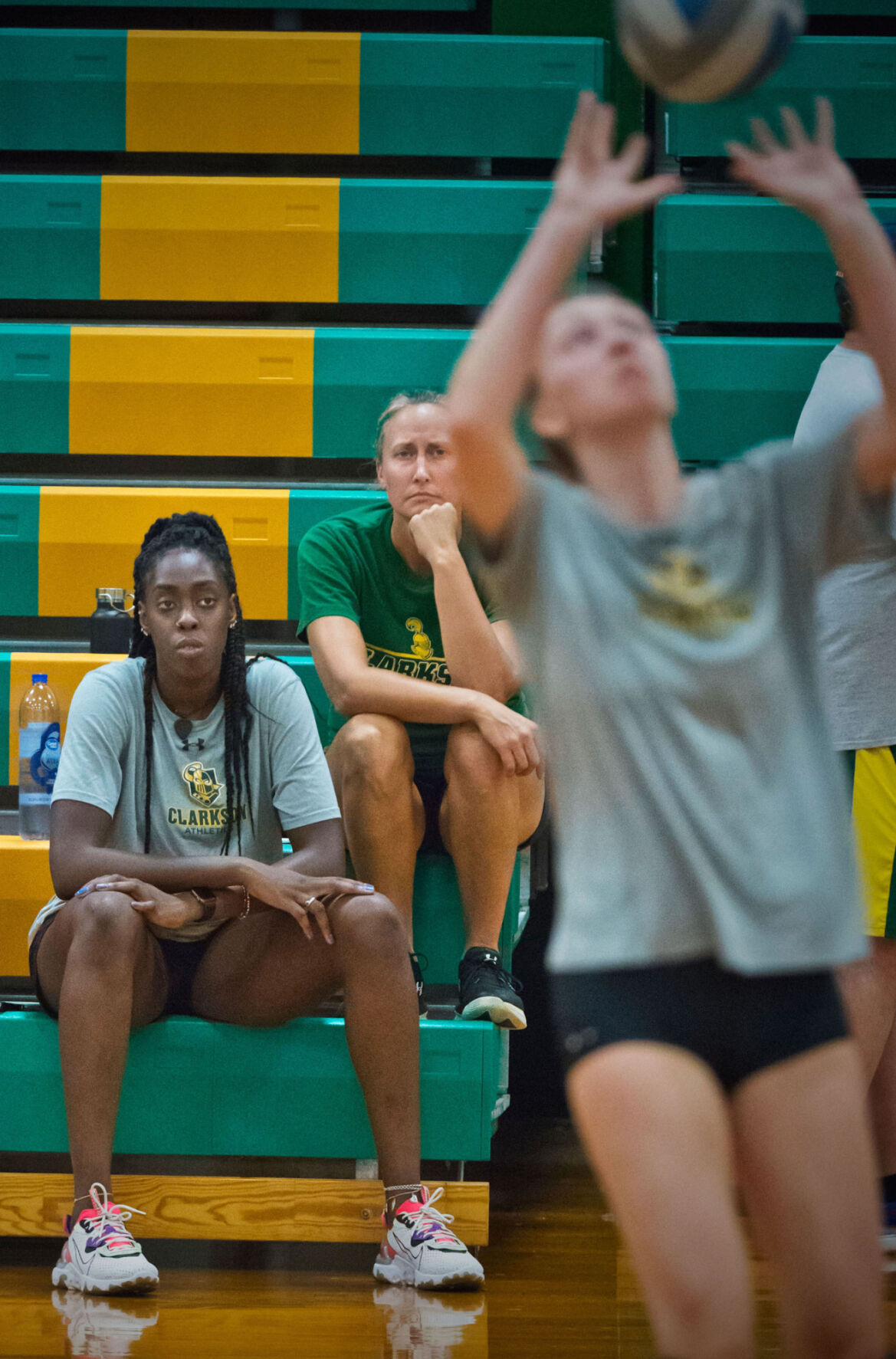 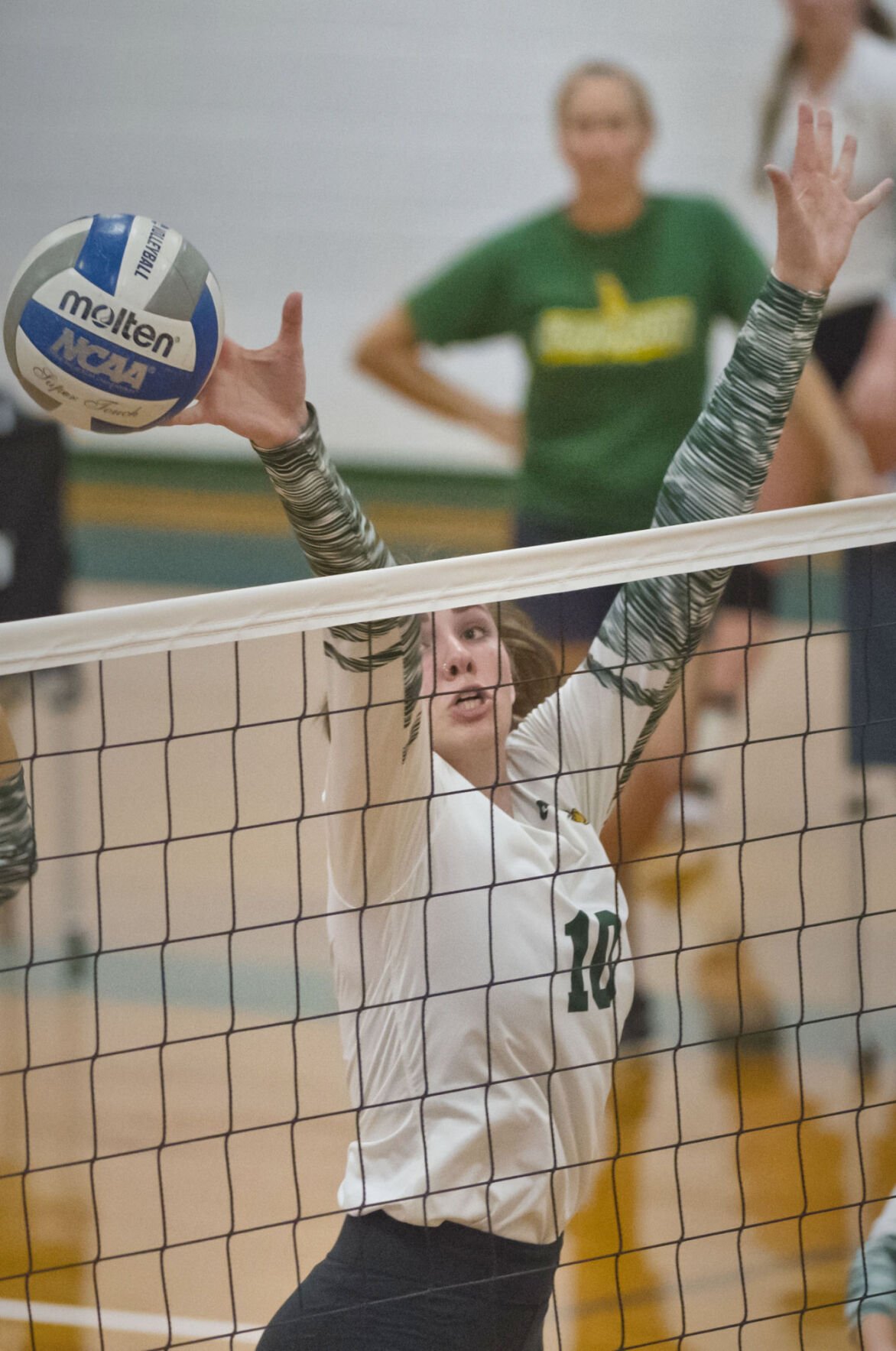 Clarkson’s Morgan McEwen get her hand on the ball at the net during an inter-squad scrimmage. Christopher Lenney/ Watertown Daily Times 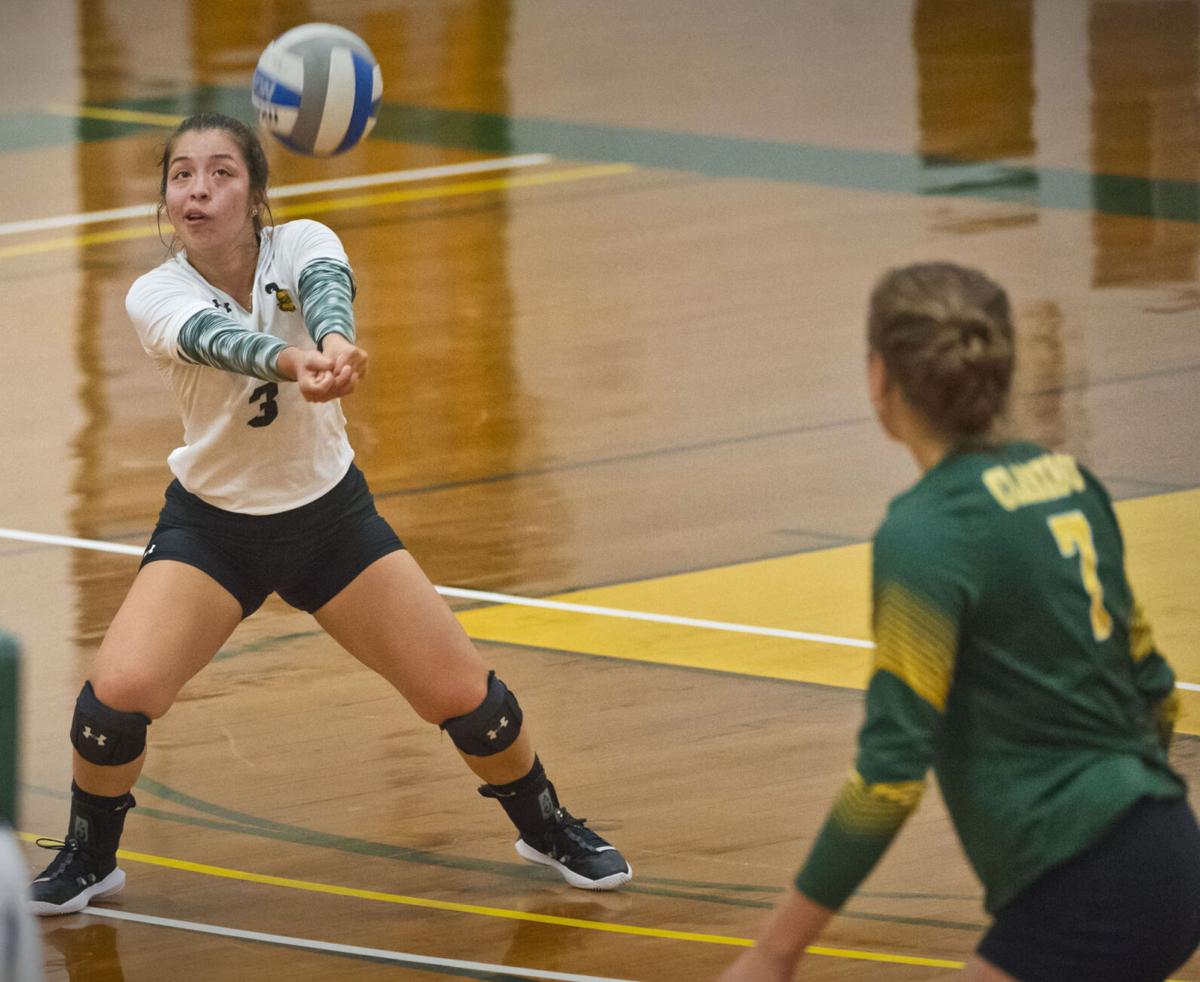 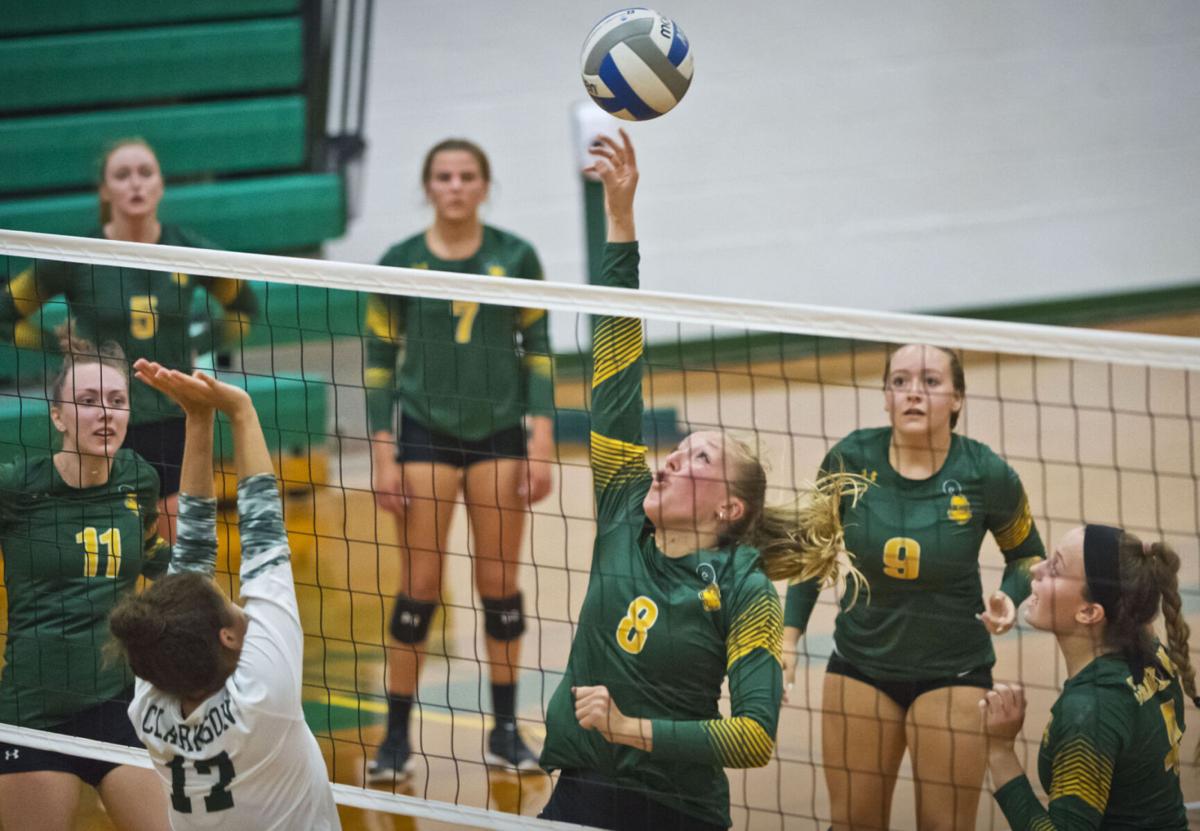 Clarkson’s Morgan McEwen get her hand on the ball at the net during an inter-squad scrimmage. Christopher Lenney/ Watertown Daily Times

POTSDAM — The Clarkson University women’s volleyball team has been waiting 21 months to capitalize on the momentum gained by reaching the NCAA Division III quarterfinals in 2019.

Clarkson, which went 28-6 in its most recent season, last played on Nov. 21, 2019, when it lost in five sets to defending national champion Emory in a quarterfinal match.

The Golden Knights, like every other Division III women’s volleyball program last year, missed their season due to the COVID-19 pandemic.

Action resumes for Clarkson tonight when it takes on village rival SUNY Potsdam in a nonconference match at 7 p.m. at Maxcy Hall.

“It feels really good,” Clarkson coach Carol LaMarche said of playing again. “The team is really focused and really driven and our junior and senior leadership is outstanding. We have, essentially, two freshmen classes. The sophomores haven’t really played a season. We are just excited to get out there, it’s been a long wait.”

In the last decade the Clarkson women’s volleyball team has been the area’s most successful fall college sport, reaching the NCAA quarterfinals five times.

For the players, knowing they are going through preseason workouts hoping to compete for a national championship can make the hard work easier to endure.

“It’s really important to me,” said junior Emma Baxter. “I know when I came in as a freshman, I wanted to play for a competitive team and being a part of a competitive team that not only wins Liberty Leagues, wins regionals, goes to the elite eight numerous times. It’s something that I’m proud to be part of.”

Said senior Kristen Liu, “It feels awesome to be back. We’ve been so anxious to be back. It’s nice to be able to really compete and play together. I think us making it that last (season), it makes it feel a lot more tangible and real (goal) for us. I know all the girls that came in and weren’t able to compete really want to get there themselves, too.”

Clarkson could not play last year, nor could it practice with the entire team in one setting. But the Golden Knights found ways in small groups to build toward this season.

The year off has brought some oddities, like Baxter, who jumped from a rookie to a veteran leader in one playing season.

“I was 18, fresh out of high school, trying to play for this big team and now I’m a 20-year-old junior that’s just trying to do the same thing,” Baxter said.

The Golden Knights received the most points of any program that didn’t get a top-25 spot.

Clarkson volleyball has always played a challenging nonconference schedule and the COVID-19 situation has not changed that this fall. Clarkson will travel to a tournament in Virginia this weekend, facing Mary Washington and Virginia Wesleyan in Virginia Beach and then Illinois Wesleyan and Christopher Newport in Newport News.

On Sept. 17-18 the Golden Knights will go to Hoboken, N.J., to play Stevens, Scranton and Stockton. Clarkson also makes a trip to Glenside and Allentown, Pa. in mid-October to face Arcadia, Johns Hopkins and Muhlenberg.

Outlook: None of the area soccer teams played games last season due to COVID-19 and all four squads have two sets of freshmen when one considers the freshmen last year who never got to play. Clarkson was the most successful area team in 2019, reaching the Liberty League championship game. But the Golden Knights are essentially a new team this season.

Outlook: Clarkson was 7-1-1 in nonconference games two years ago, but went 2-7 in the Liberty League. Most of this year’s roster is new. SLU won 12 games two years ago. SLU returns Isabel Silvia, who scored six goals and Tyler Potter, who scored five. Ogdensburg native Kelsey Pinkerton is one of the captains of SUNY Canton. The Kangaroos return Sarah Riedel, who scored four goals. SUNY Potsdam went 8-9-1 two years ago and returns one of its top offensive players in Mackenzie Bowie, who scored eight goals.

Outlook: Clarkson won 28 games in 2019 and reached the NCAA Elite Eight for the fifth time in eight years, losing in five sets to defending national champion Emery in a quarterfinal match. St. Lawrence University is coming off a 22-win season which ended with a loss to Clarkson in the first round of the Liberty League Tournament. SUNY Canton won nine matches two years ago but reached the NAC championship match before falling to Maine-Maritime. SUNY Potsdam is coming off a 10-win season.