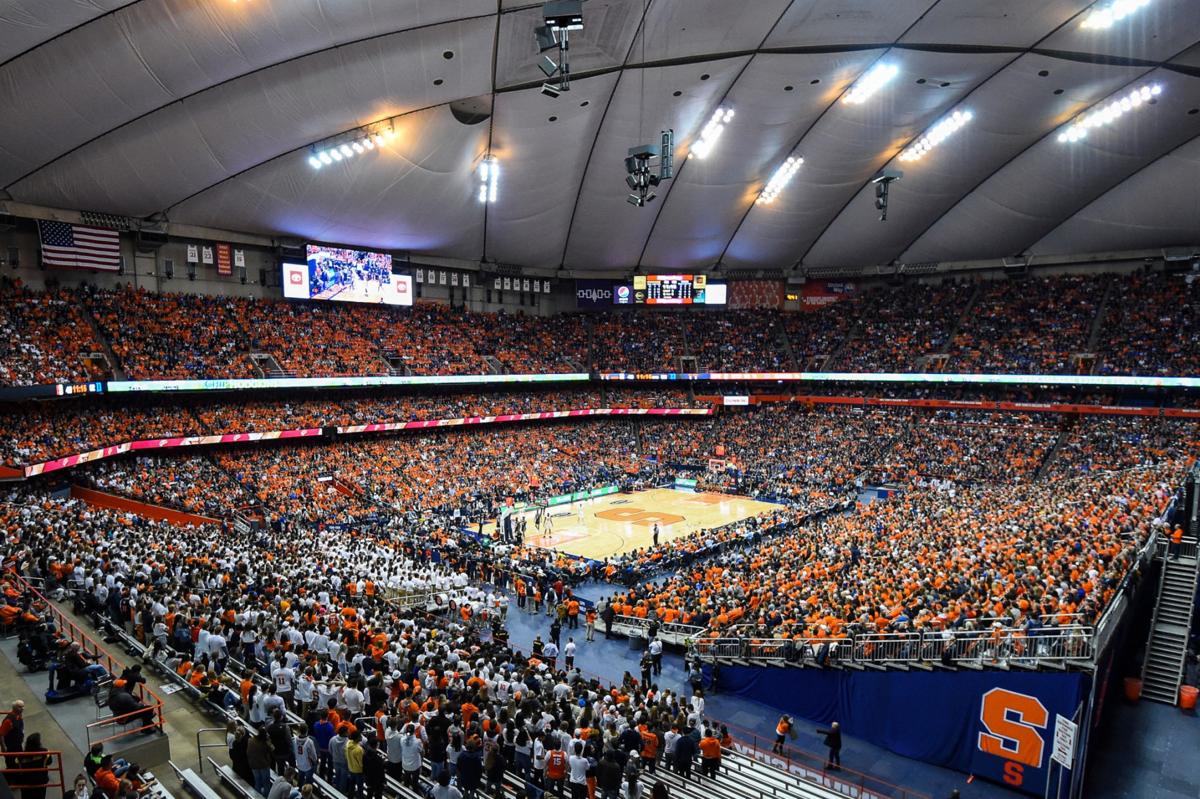 The Syracuse men’s basketball team plays Duke on Feb. 1 in the Carrier Dome, during the final month before reconstruction efforts on the facility. Rich Barnes/USA TODAY Sports 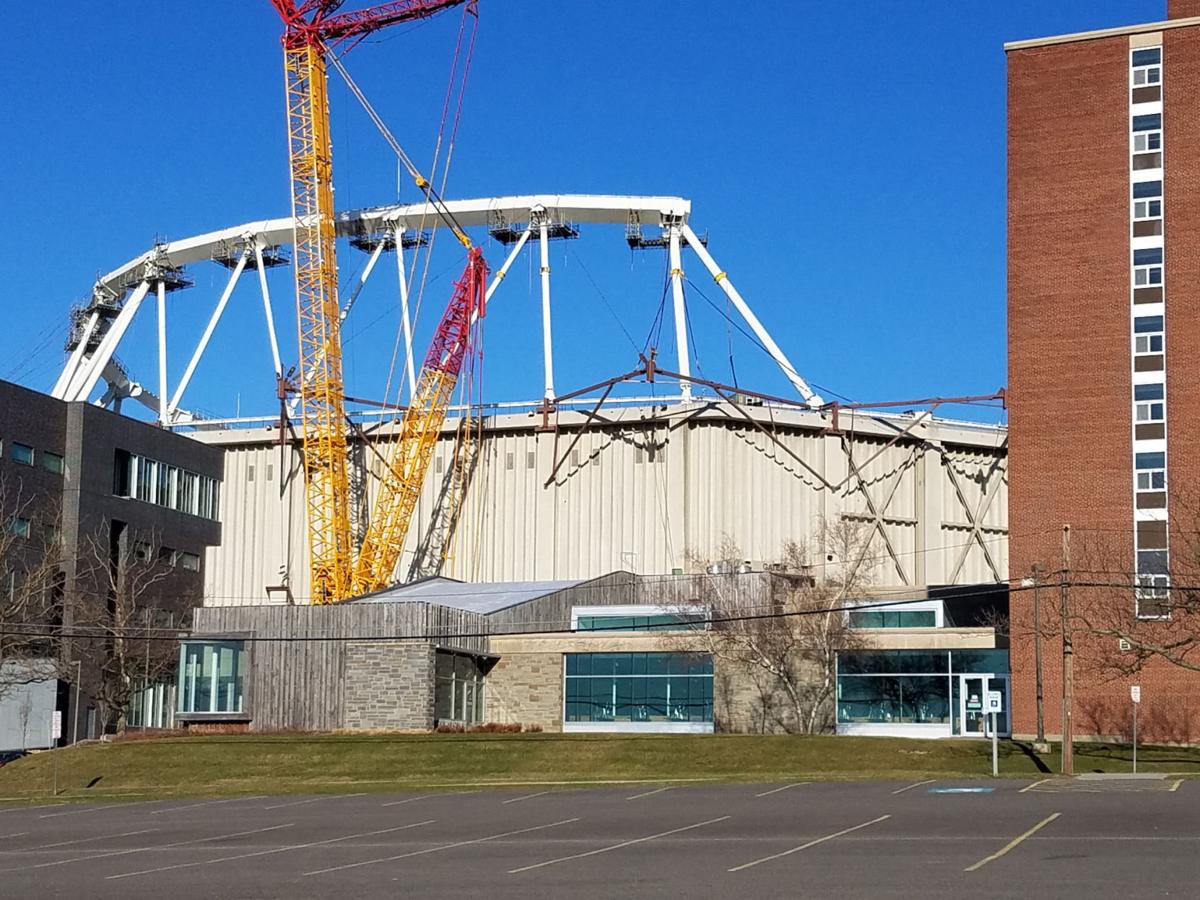 The Carrier Dome is pictured Saturday after the Dome’s deflation on Monday in preparation for installing a new, updated dome roof. Josh St.Croix/Watertown Daily Times

The Syracuse men’s basketball team plays Duke on Feb. 1 in the Carrier Dome, during the final month before reconstruction efforts on the facility. Rich Barnes/USA TODAY Sports

The Carrier Dome is pictured Saturday after the Dome’s deflation on Monday in preparation for installing a new, updated dome roof. Josh St.Croix/Watertown Daily Times

SYRACUSE — For Syracuse University sports fans and area high school teams that travel down Interstate 81 to watch the Orange or play for a Section 3 title — the indelible image of the famed white bubble atop the Carrier Dome is when butterflies hit your stomach and reality sets in that you’re fast approaching the big game.

That unforgettable portrait in the city skyline is forever changed following the final deflation of the distinctive Dome top Monday, which was latest step in SU’s $118 million renovation project that includes a new fixed roof for the venue.

“My earliest memories, even just driving through Syracuse when you’re really young and your parents would say: ‘There’s the Dome,’ as you would see that roof,” said Carthage native Josh Coffman, who played for SU men’s lacrosse and coached his Lowville football team to sectional titles in 2016 and 2019 at the stadium.

“You just always thought of it as a special place to watch a game and if your parents got tickets to a game there, you were instantly excited,” he added.

The university had not announced any planned changes to the construction schedule, which started last July, as of Saturday due to the coronavirus pandemic.

The new roof is expected to be completed over the next month-plus and the venue will remain with an open-air look at the top for the time being — a rare sight for longtime Orange fans that have packed the unique setting since it opened in 1980.

In recent years, the Dome has hosted various Section 3 and state playoff games for football and basketball, and the mystique of the arena undoubtedly added another exciting element for area players pursuing their championship dreams.

Jim Whitley — a lifelong Orange fan and Indian River girls basketball coach of 24 years — has been to roughly 60 games of various sports in the Dome. He said that there was nothing quite like watching his daughter, Megan, play on Jim Boeheim Court for South Jefferson in recent years or when he helped guide the Warriors to the 2018 Class A title game in the heralded building.

“Coaching on that floor was a big deal, but for the kids, it was just an unbelievable experience,” Whitley said. “You could just see in their eyes how awestruck they were.”

Whitley also recalled his initial awe moment under the classic Dome top — witnessing the SU football team face rival Pittsburgh during the first season it opened in 1980 as the Northeast’s first domed stadium. Whitley was a teenager at the time and sat at the 50-yard line with his family among Panthers fans.

Whitley recalls getting onto the field postgame and seeking out standout Pitt defensive end Hugh Green for an autograph as a young upstart quarterback named Dan Marino watched on.

“He was not a big deal back then,” Whitley said. “I think it might have been his freshman year. Here I was running up as a little kid to Hugh Green for an autograph, and Dan Marino was right there. ... That was my first experience in the Dome, and especially as a kid, it just seemed enormous.”

Coffman remembers his first opportunity to play catch under the Dome top as a fifth-grade ball boy for his dad — longtime Carthage football coach Terry Coffman — who led one of the all-star teams in the John Arcaro Senior Bowl. Josh’s brother, Jason, coached the Comets in their first-ever state title game last fall, which was part of the final slate of high school games played under the classic roof.

Josh Coffman was a three-time All-American for the SU men’s lacrosse team — playing from 1999-2002 — and said that he still recalls his first practice in the Dome from entering through stadium control and walking onto the field.

“It’s pretty neat because it becomes your home field then,” Coffman said. “You feel comfortable in there, and we had times in practice where we had to run through the hallways or run up the stairs, and it just became like your home field. It’s an awesome place to play in and to practice in.”

The official SU athletics website — cuse.com — offers a 24/7 live aerial camera above the Dome for fans to watch construction of the new roof in real time, and posted a time-lapse video of the roof deflation. The Dome was vacated March 1 to complete the bulk of the New Stadium Experience project, which was announced three years ago, and is expected to be completed in time for the SU football home opener Sept. 19 against Colgate.

“I’m sure it’s going to look great and it will be nice, because I don’t think my kids get as excited when they see the roof of the Dome driving through Syracuse, so now it will look a little bit different and maybe get them more excited again to go there,” Coffman said. “I’m excited to see how it looks with all the improvements, it’s a pretty special place.”

The crown-truss structure is starting to form that will support the new roof, which will consist of tension membrane and rigid panels held in place by concrete walls and steel bracing. It is expected to nearly double its predecessor with a 40-year lifespan and cost less for maintenance, according to a recent update on cuse.com from Peter Sala — the SU vice president of and chief facilities officer.

The classic roof was replaced once (1999) since it initially opened and was made of Teflon-coated, fiberglass fabric panels connected by bridge cables. The original cost to build the venue was $26.85 million and $2.75 million of that was covered through a gift from Carrier Corporation.