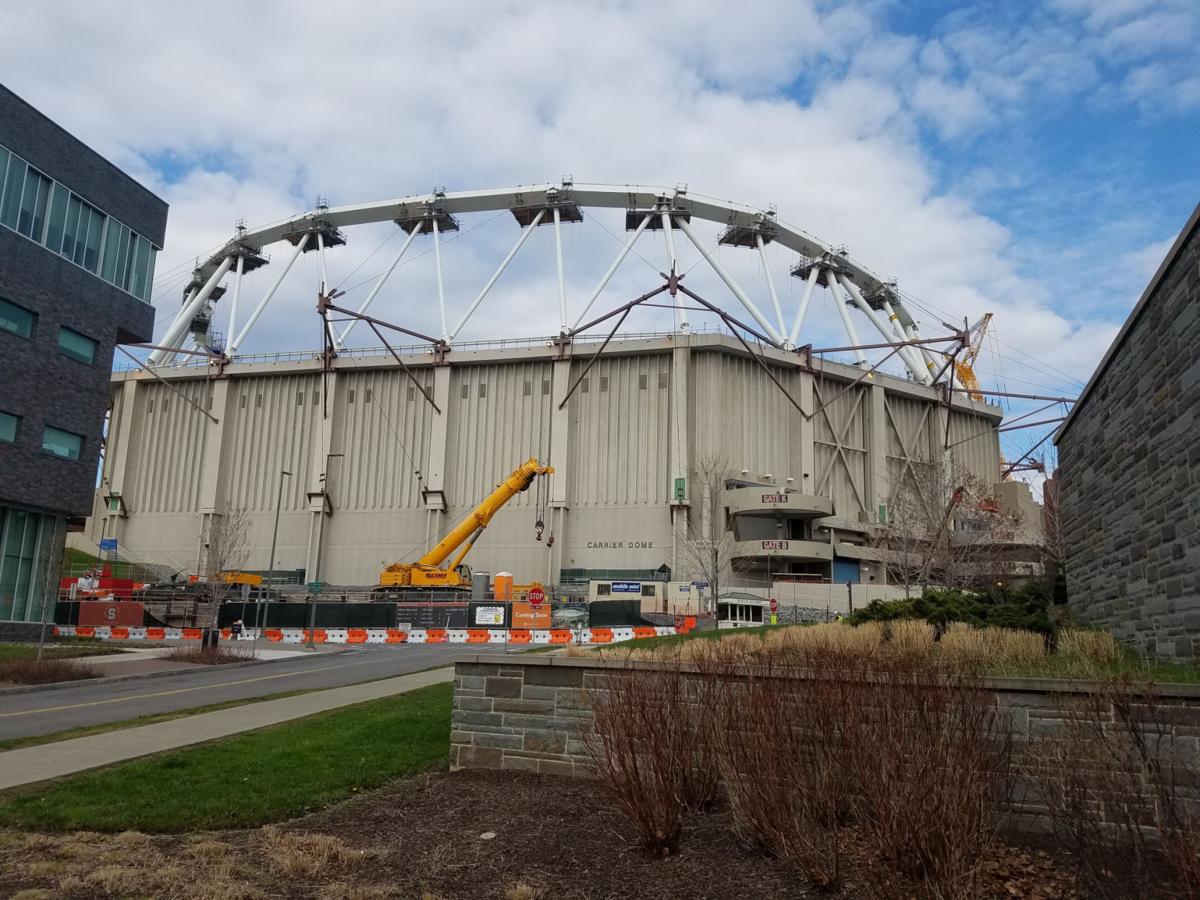 Construction remains ongoing Tuesday at the Carrier Dome in Syracuse, less than a week after the crown-truss structure to hold the new fixed roof at the venue was completed. Josh St.Croix photo 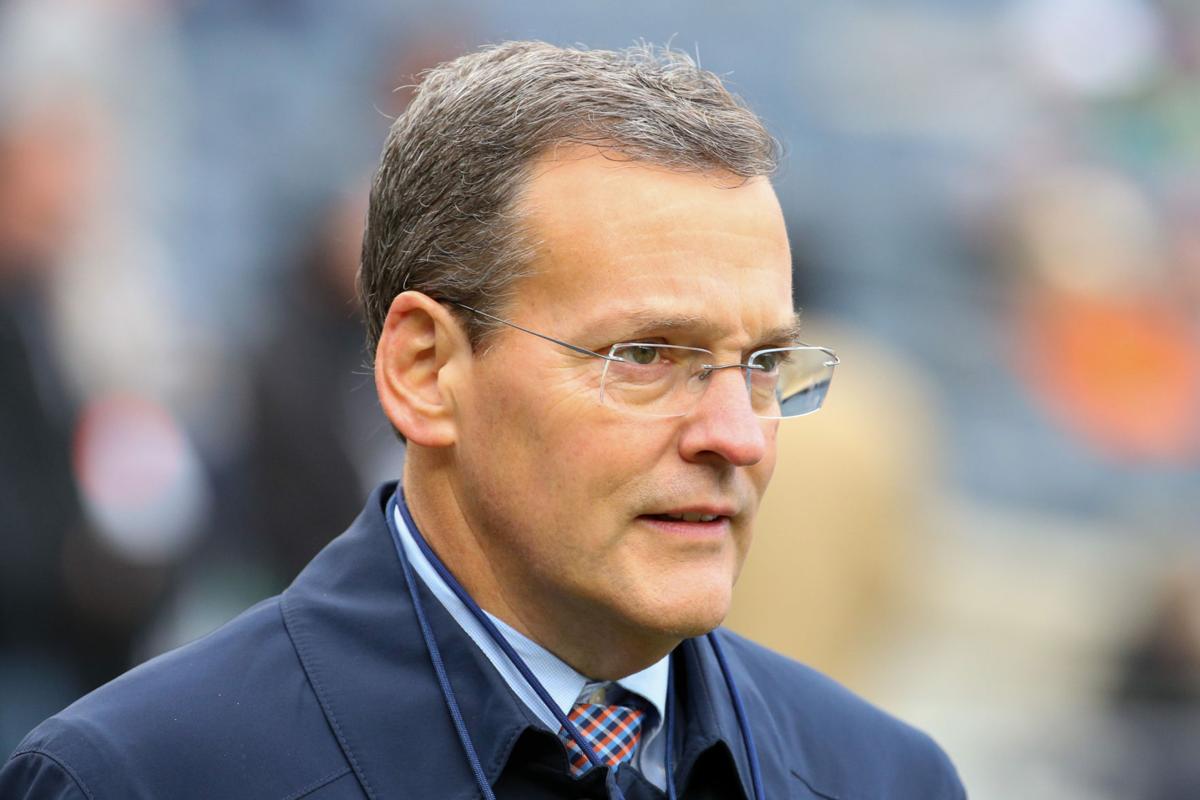 Construction remains ongoing Tuesday at the Carrier Dome in Syracuse, less than a week after the crown-truss structure to hold the new fixed roof at the venue was completed. Josh St.Croix photo

As varying levels of angst build among area athletes and sports fans with seasons on hold at all levels due to COVID-19, signs of optimism are starting to appear around Syracuse University athletics.

The Carrier Dome construction project has remained on track despite other business restrictions in the state to limit spread of the virus, and SU director of athletics John Wildhack recently provided a series of positive updates amid an uncertain future to multiple media outlets via zoom video conference.

Wildhack stated, among various SU-related topics in the 40-minute appearance, that the Atlantic Coast Conference has had no discussions about canceling the college football season this fall and that he has not explored cutting any SU athletic programs despite the expected financial setbacks due to fallout from the virus.

Wildhack provided a more uplifting view of the potential for the upcoming football campaign than recent comments made by administrators from other major conferences like the Big 12 or Pacific-12, who have predicted an entirely lost 2020 season forthcoming for college football.

“We have not, as a conference, had any discussions in terms of not playing,” Wildhack stated, according to ESPN. “We want to play, we plan to play, what we don’t know is when we’re going to start and what form or what format we’re going to start. Do you play with fans? Do you not play with fans? So much is unknown, but the ‘ADs’ and the conference office, we meet twice a week, and there’s not been one second of conversation about not having a football season in some way, shape or form.”

Wildhack also said that, while SU anticipates making cost-cutting measures to the athletics department due to the economic fallout from the virus — most notably the cancelation of the highly-profitable men’s basketball NCAA Tournament for all of its members institutions — those would not include cutting athletic programs and would be done with a priority on minimal impact to athletics staffing.

The highly-awaited “New Stadium Experience,” project to upgrade the Carrier Dome has not been impacted by state restrictions implemented earlier this month to limit some construction projects deemed nonessential.

The work hit a milestone last week when the final steel structural beam was placed to complete the new-look crown-truss structure that will support the venue’s new fixed roof.

“This achievement marks another significant milestone in our efforts to create a new stadium experience unlike anything ever seen here in Syracuse,” Pete Sala, the SU vice president and chief campus facilities officer, recently told the SU athletics website.

“The completion of the crown-truss was a critically important step and one that paves the way to begin construction of the roof itself,” Sala added. “I am grateful for the efforts of so many, who together, have worked tirelessly to continue advancing the project.”

The crown-truss phase of the project started before recent COVID-19 mandates and presented a potential public safety hazard if left unfinished. Work is expected to continue as scheduled on the $118 million upgrade to the area’s iconic arena that originally opened in 1980. The first event scheduled for the new-look Dome is the Orange football team’s home opener against Colgate on Sept. 19.

Sala stated that the crews are following social distance guidelines and spend 30 minutes to start each day discussing the new safety protocols and any concerns among the workers.

The next steps are to install the new roof and continue progress on the interior fan experience aspects, which include a new vertically-hung scoreboard, state-of-the-art sound and lighting systems, and air conditioning.

“Our goal was to get in the building and take care of the fans first,” Sala told the SU athletics site. “The electricians are here every day putting in the infrastructure for the lighting, the sound and the video.”

On Monday, Wildhack announced that SU is enacting an option for season-ticket holders of the football and men’s and women’s basketball teams titled: “Commit now, pay later.”

The plan provides new payment timelines to help ease the economic challenges fans might be facing due to COVID-19. Information for new dates and payments plans in all sports is available at the official SU athletics website, cuse.com.