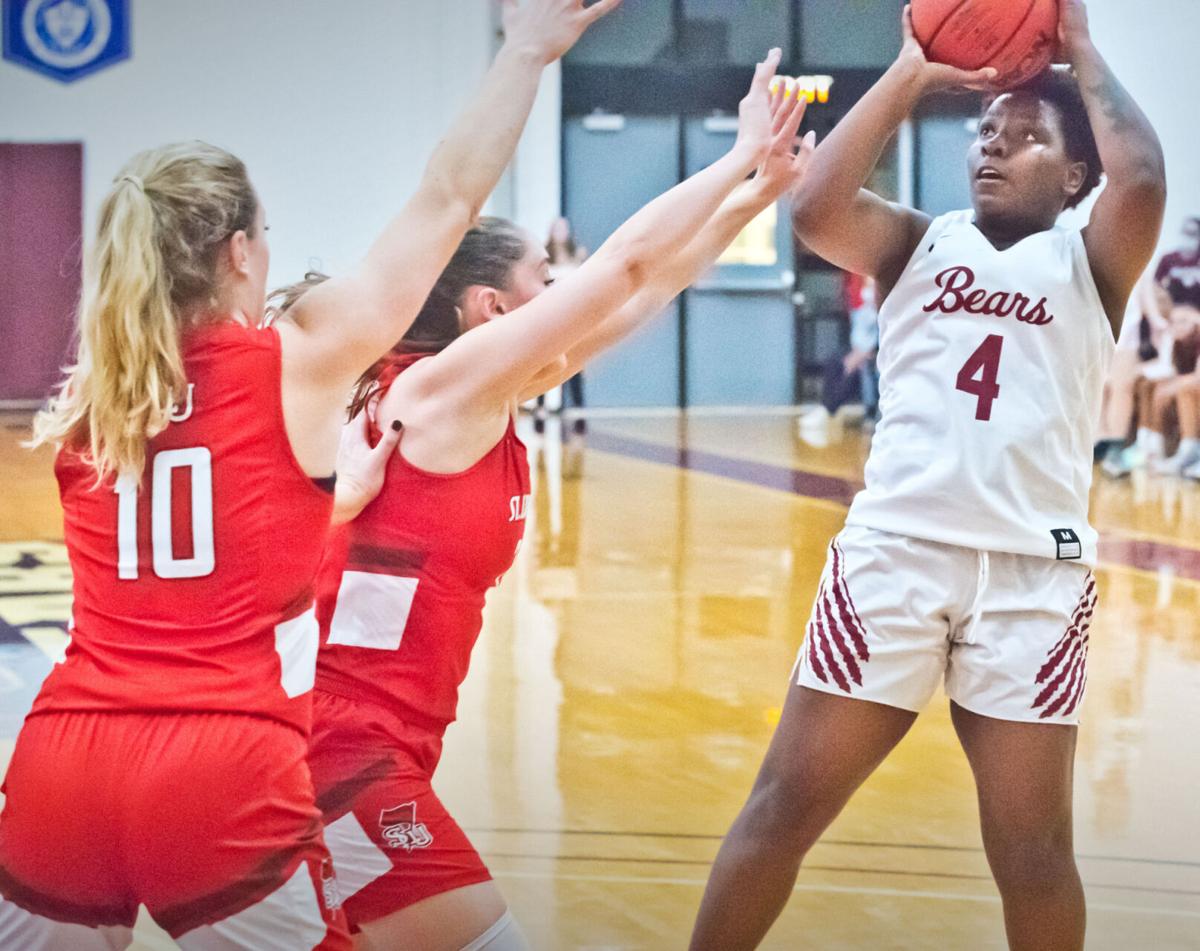 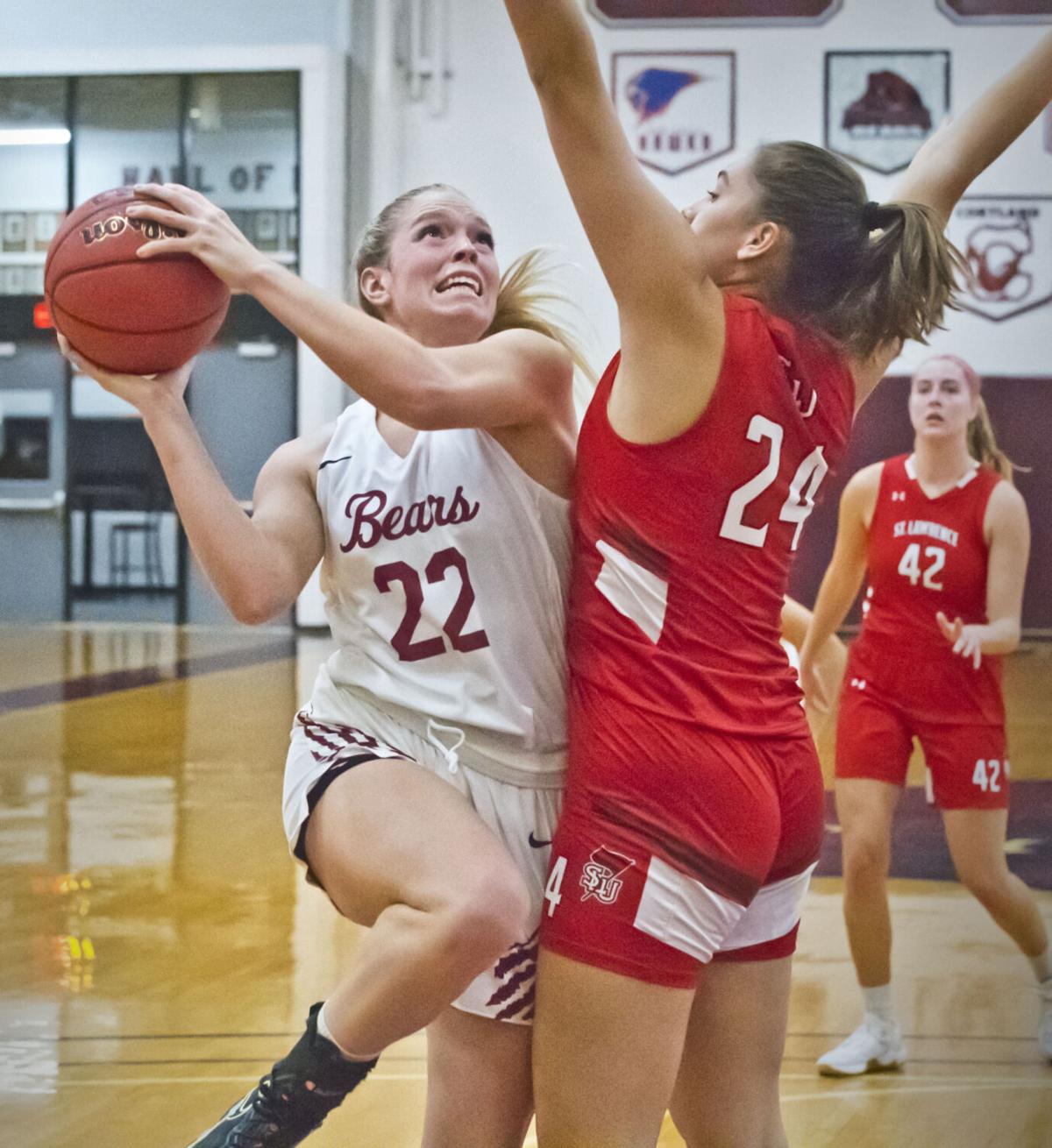 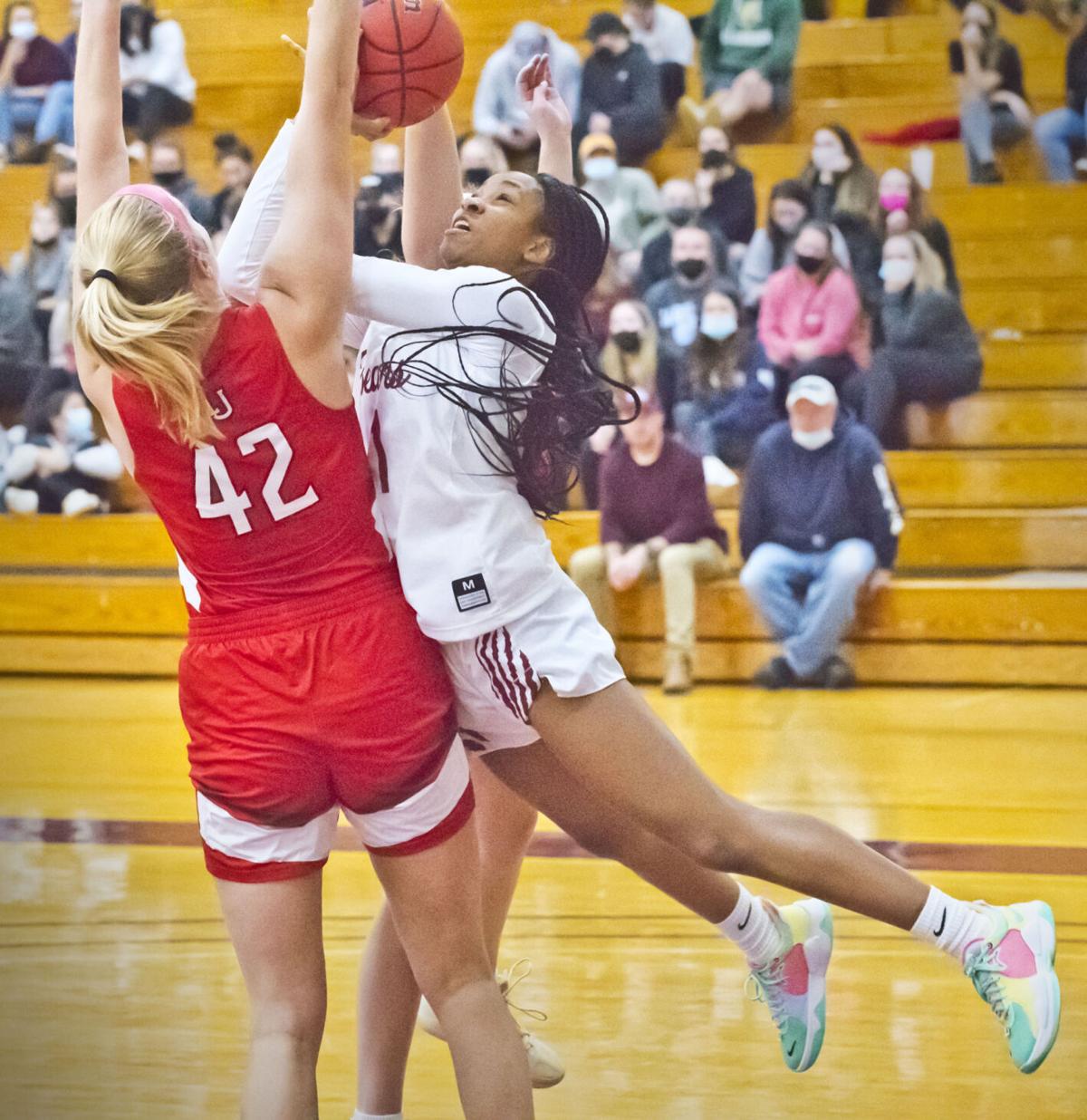 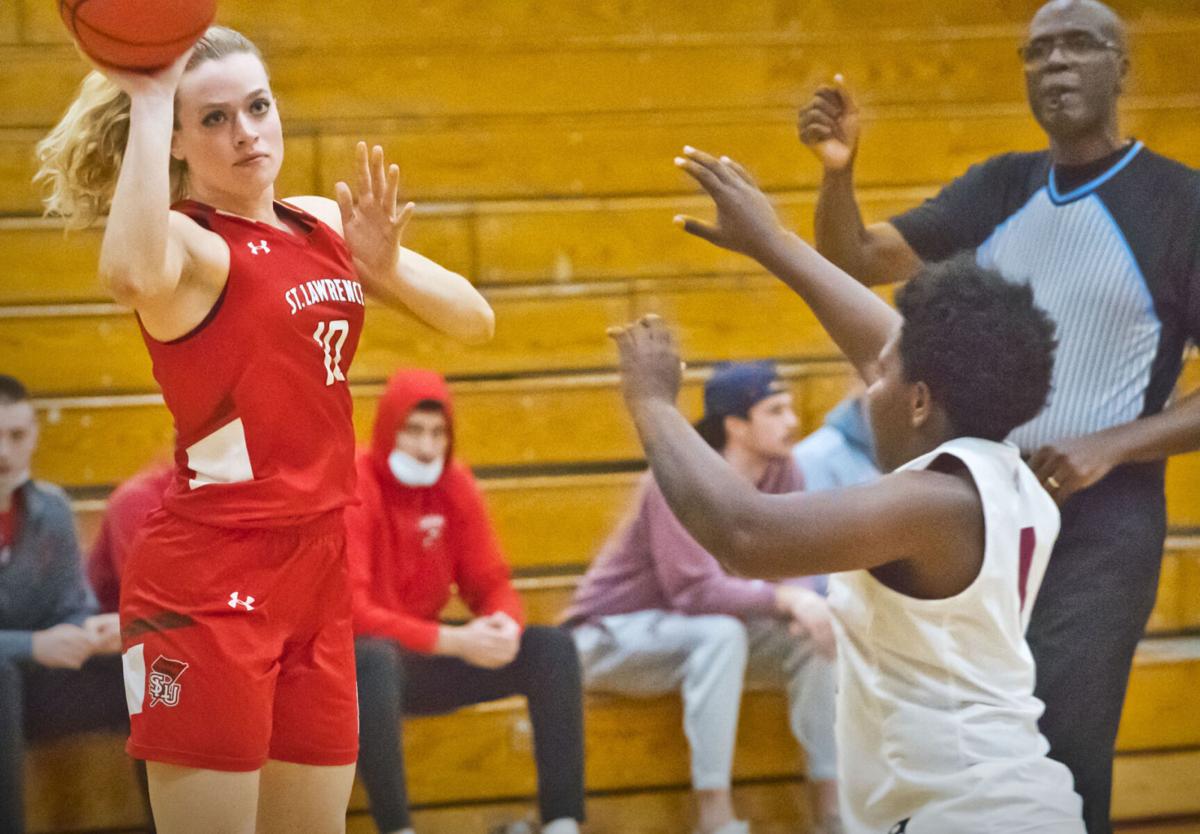 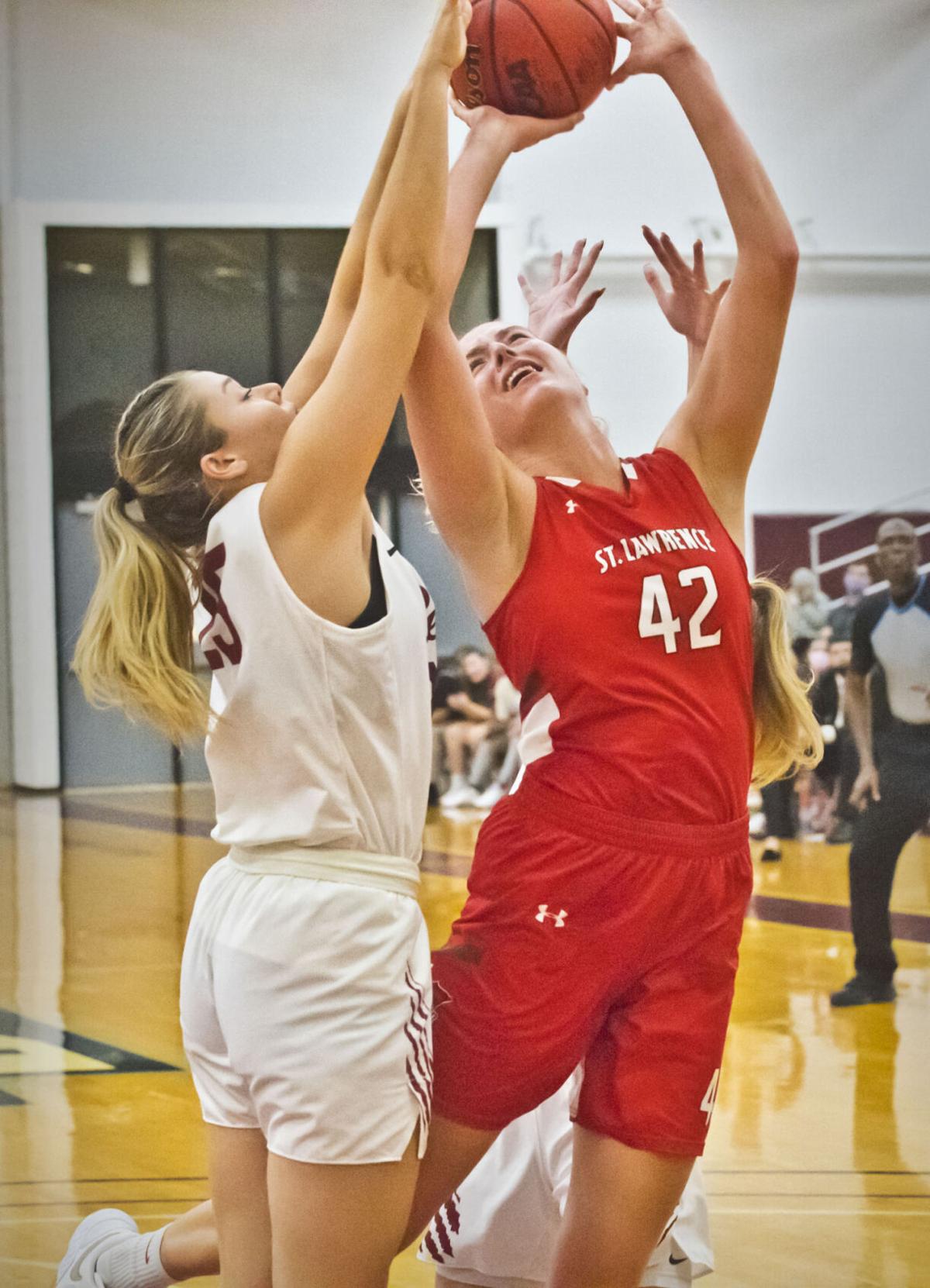 POTSDAM — The St. Lawrence University duo of 6-foot-3 Katie Frederick and 6-2 Olivia Barringer are going to give a lot of women’s basketball teams trouble this season.

The first team to find that out was SUNY Potsdam, which fell 68-60 to the Saints in the nonconference opener for each team Tuesday night at Maxcy Hall.

SLU outrebounded the Bears 56-37. Frederick grabbed 18 of those rebounds and Barringer picked up eight.

“We usually do (have a height advantage) with those two,” Saints coach Dan Roiger said. “Barringer is so long that she doesn’t play like a 6-2 player, she plays like she’s 6-4 with her arm length. What they are starting to do, is they find each other on cuts. They are solid teammates that wanted each other to do well.”

The Saints started the game on an 11-0 run and never looked back.

Frederick scored three points, grabbed five rebounds and added an assist during the spurt, which lasted 4 minutes and 23 seconds.

“Rebounding is my favorite part of the game, but (Potsdam) also didn’t have a girl over 6-feet,” Frederick said. “It was important to capitalize. It’s an advantage that I have. Most of our players are upperclassmen. We have such a strong connection from playing with each other.”

Said Barringer, “We knew we needed to come out stronger than they were, especially with our (height) advantage. I think that the guards took great advantage of that and we really rotated the ball, high post, low post.”

Throughout the game the Bears fell behind by a bit then make a run to cut into the lead.

“I thought we learned a lot about our team today, how resilient we are,” Bears coach Brittany Cohen said. “We got into quite a hole in the beginning. We haven’t played a game in 626 days so we knew there would be some first-game jitters with turnovers and stuff like that. I’m really proud of the way we battled.”

But the Saints wound up with a 35-29 edge at halftime.

Abby Doin and Dylan Watkiss hit free throws down the stretch to close out the contest.

“We have to learn how to box out as a team,” Hunter said. “Once we box out we are good. A lot of my drives were falling in. Everything inside was falling for me. My teammates were getting me open and getting me open shots.”