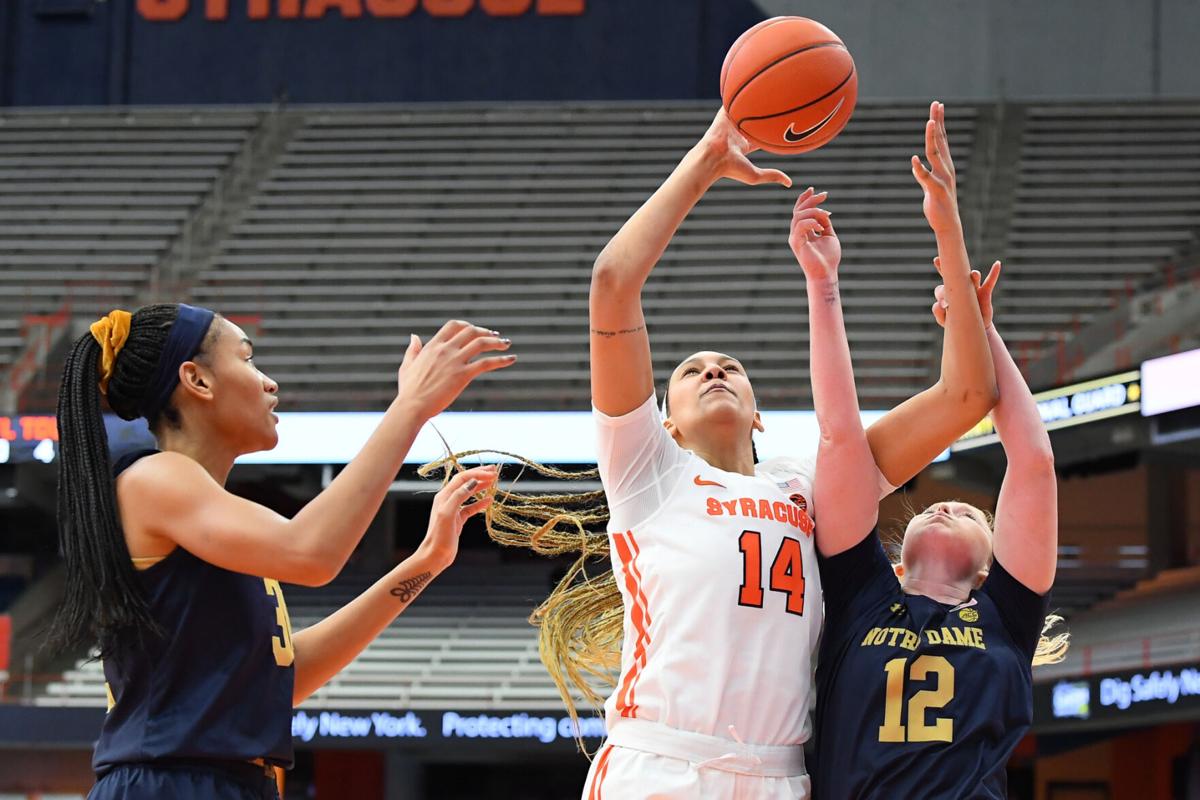 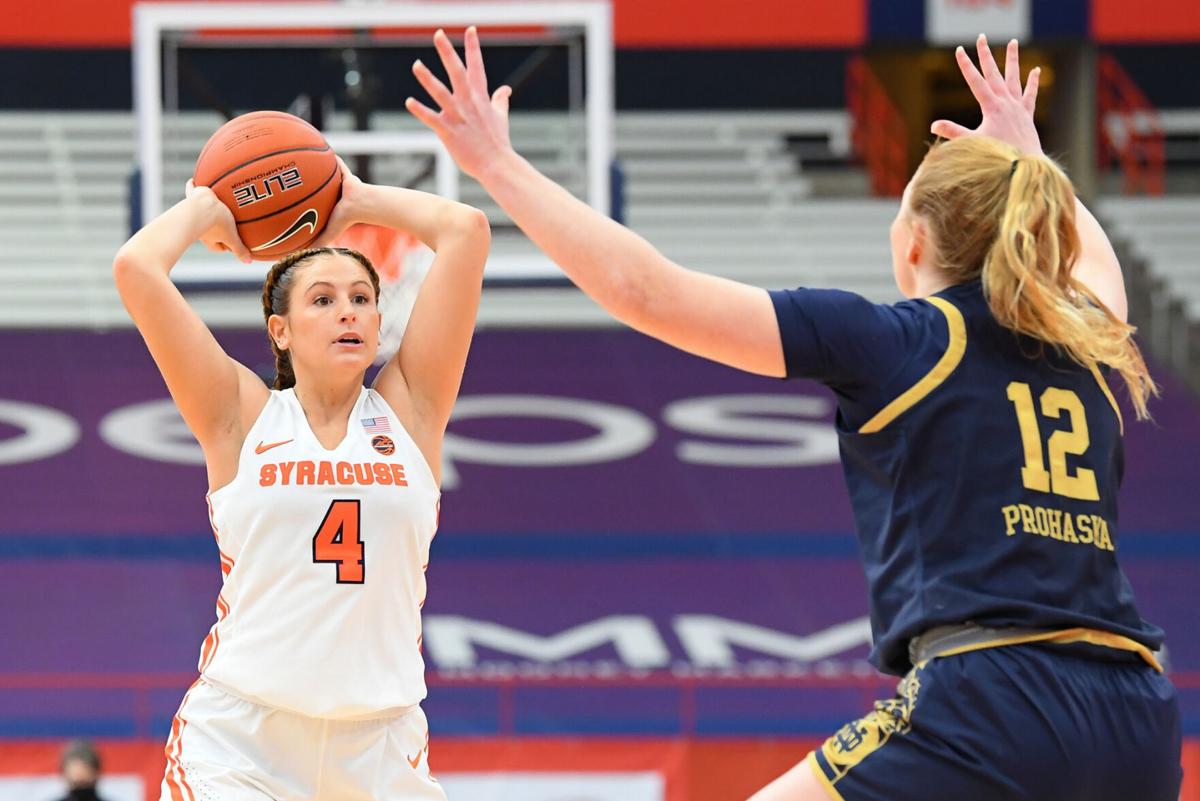 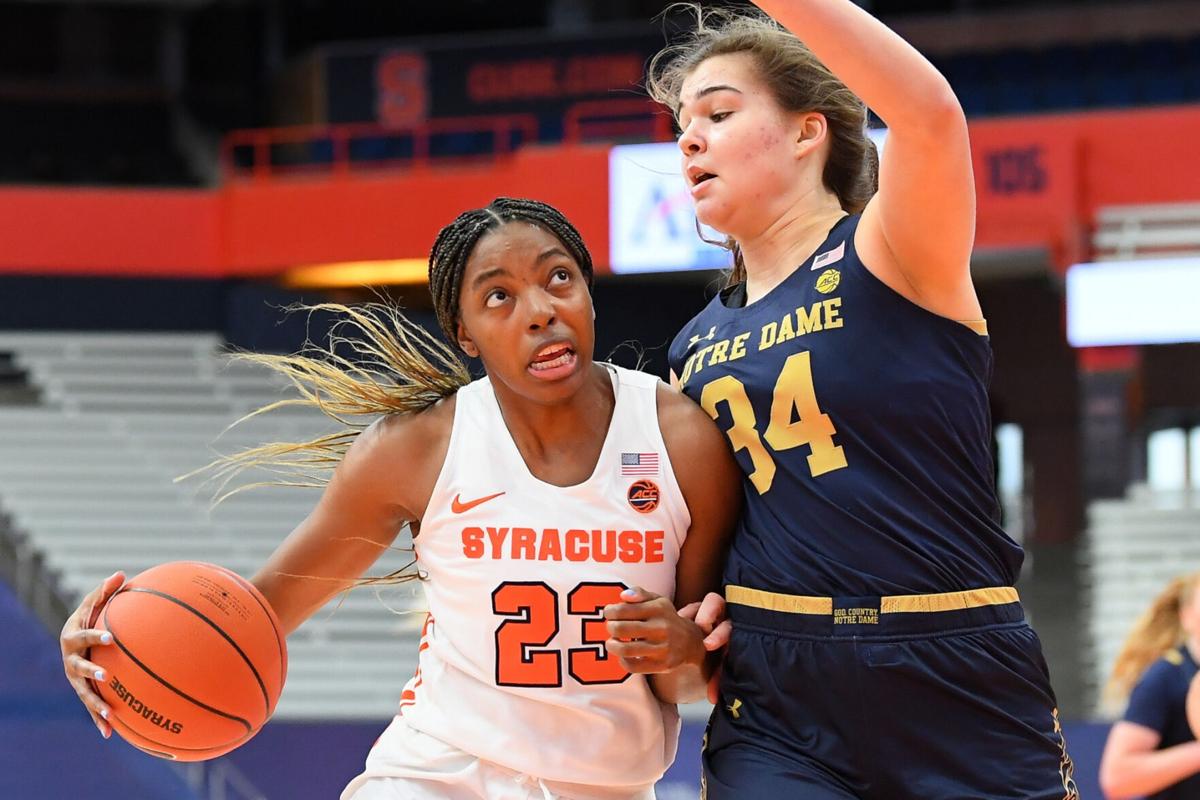 Syracuse Orange guard Kiara Lewis drives to the basket against the defense of Notre Dame Fighting Irish forward Madelyn Westbeld during the first half Sunday at the Carrier Dome in Syracuse. Rich Barnes/USA TODAY Sports 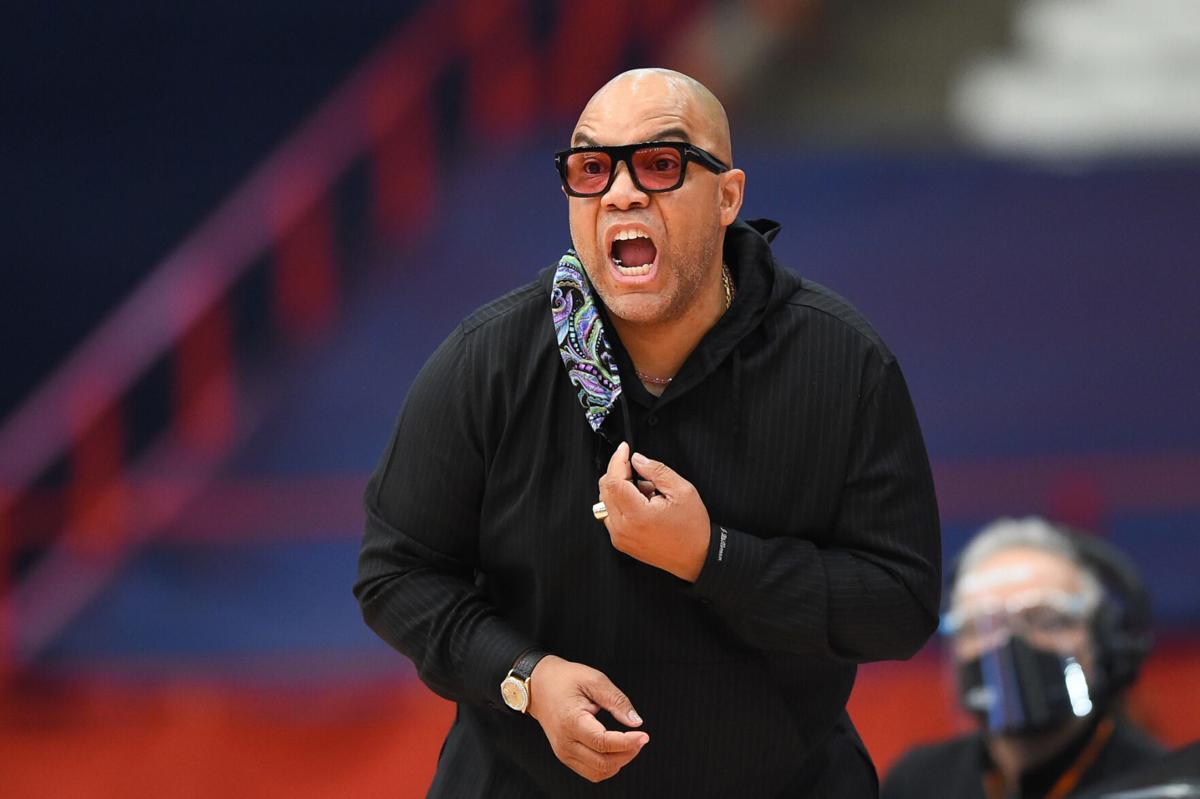 Syracuse Orange head coach Quentin Hillsman reacts to a play against the Notre Dame Fighting Irish during the first half Sunday at the Carrier Dome in Syracuse. Rich Barnes/USA TODAY Sports

Syracuse Orange guard Kiara Lewis drives to the basket against the defense of Notre Dame Fighting Irish forward Madelyn Westbeld during the first half Sunday at the Carrier Dome in Syracuse. Rich Barnes/USA TODAY Sports

Syracuse Orange head coach Quentin Hillsman reacts to a play against the Notre Dame Fighting Irish during the first half Sunday at the Carrier Dome in Syracuse. Rich Barnes/USA TODAY Sports

Lewis made a 3-pointer with five minutes left to tie the game at 67-67, pushing the Orange to a dominant fourth-quarter performance while reaching the career milestone.

Syracuse improved to 9-5 overall and 6-3 in the ACC, beating Notre Dame for just the fourth time in 39 all-time matchups. SU is next scheduled to play at 7 p.m. Tuesday at Georgia Tech.

The Orange outscored the Irish, 23-4, during the fourth quarter and trailed by as much as 15 points in the second half.

“That says a lot about our players and their will to win and their fight, we always give ourselves a chance,” Syracuse coach Quentin Hillsman said. “We just talked about keep playing, keep working, there’s a lot of time. That’s an old boxing, Buddy McGirt thing, in boxing and sports, there’s a lot of time. If there’s one minute left in the fight, you can land that hard right hand and get it over with, and that’s what did in that fourth quarter.”

Mangakahia matched her season high of 19 points while making a season-best 5 of 10 from behind the 3-point arc. She scored 13 in the second half and made a 3-pointer to close the third quarter and begin the fourth, trimming the Orange deficit to 65-61 after the sequence.

She also delivered the assist to Cardoso on an inside bucket to give SU its first lead of the second half, 71-69, with three minutes and 33 seconds left.

“(Hillsman) yells at me to shoot the ball,” Mangakahia said. “I’m a pass-first point guard so sometimes watching film I’m like: ‘Oh my gosh, I should have shot that.’ But coming in today, I knew they played zone and I knew that shot at the top of the key would be open for me, so mentally preparing for this game, I told myself I have to shoot more and be more of a (scoring) threat on offense.”

Cardoso was equally impactful in SU’s fourth quarter showing. After scoring the go-ahead bucket, she blocked a shot to set up a 3-pointer on the other end by fellow freshman, Priscilla Williams, to extend the SU edge to 74-69. Cardoso then tipped a pass leading to an SU steal on the next possession and ran the floor to finish inside and increase the Orange advantage to 76-69 as it pulled away.

The 6-foot-7 freshman center went 8-for-12 from the field and scored 11 of her 18 points in the second half. She finished with the most blocks for an SU player since Kayla Alexander on Dec. 4, 2010.

Hillsman credited Cardoso for helping SU shine defensively after switching from its usual 2-3 zone to a man-to-man defense to spark the rally.

“Our defense was really good in the fourth quarter,” Hillsman said. “We went (man-to-man defense) and kept them in front of us, guarded the ball, and any mistakes we made, Kamilla erased them.”

Lewis scored 16 points to go with four assists while Williams added 11 points, each hitting on three shots from behind the 3-point arc for SU.

Lewis, the redshirt senior guard and returning All-ACC first-team selection, reached the 1,000-point milestone in her third season for the Orange, and that total does not include her freshman campaign at Ohio State.

Sam Brunelle scored a game-high 19 points and freshman standout Maddy Westbeld added 12 for Notre Dame (8-7, 6-5). The Irish pulled away early and held SU scoreless for a seven-minute stretch during a 17-0 run to take a 44-34 edge into halftime.

“(Hillsman) tells us to keep pushing, because we know we’re a fast-paced team and so we can get down quickly and still be able to come back,” Williams said. “I think it’s our mentality, and we’ve learned from our losses.”