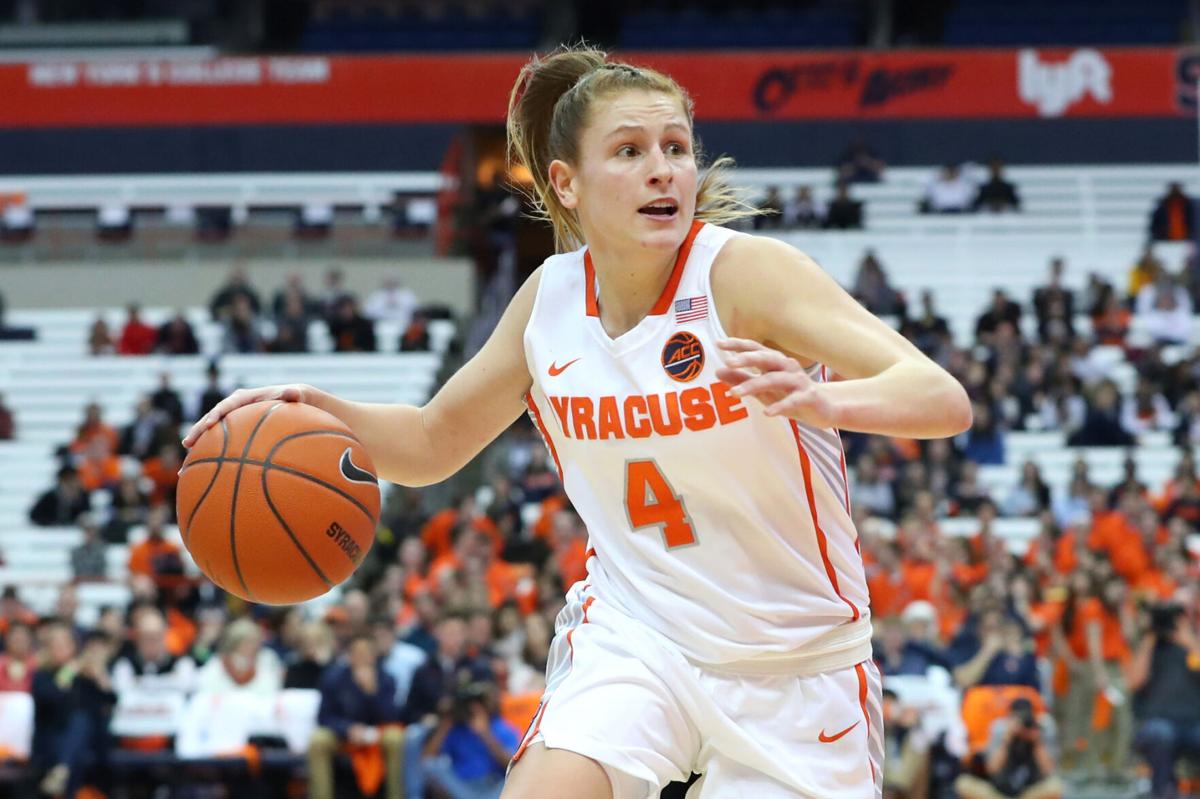 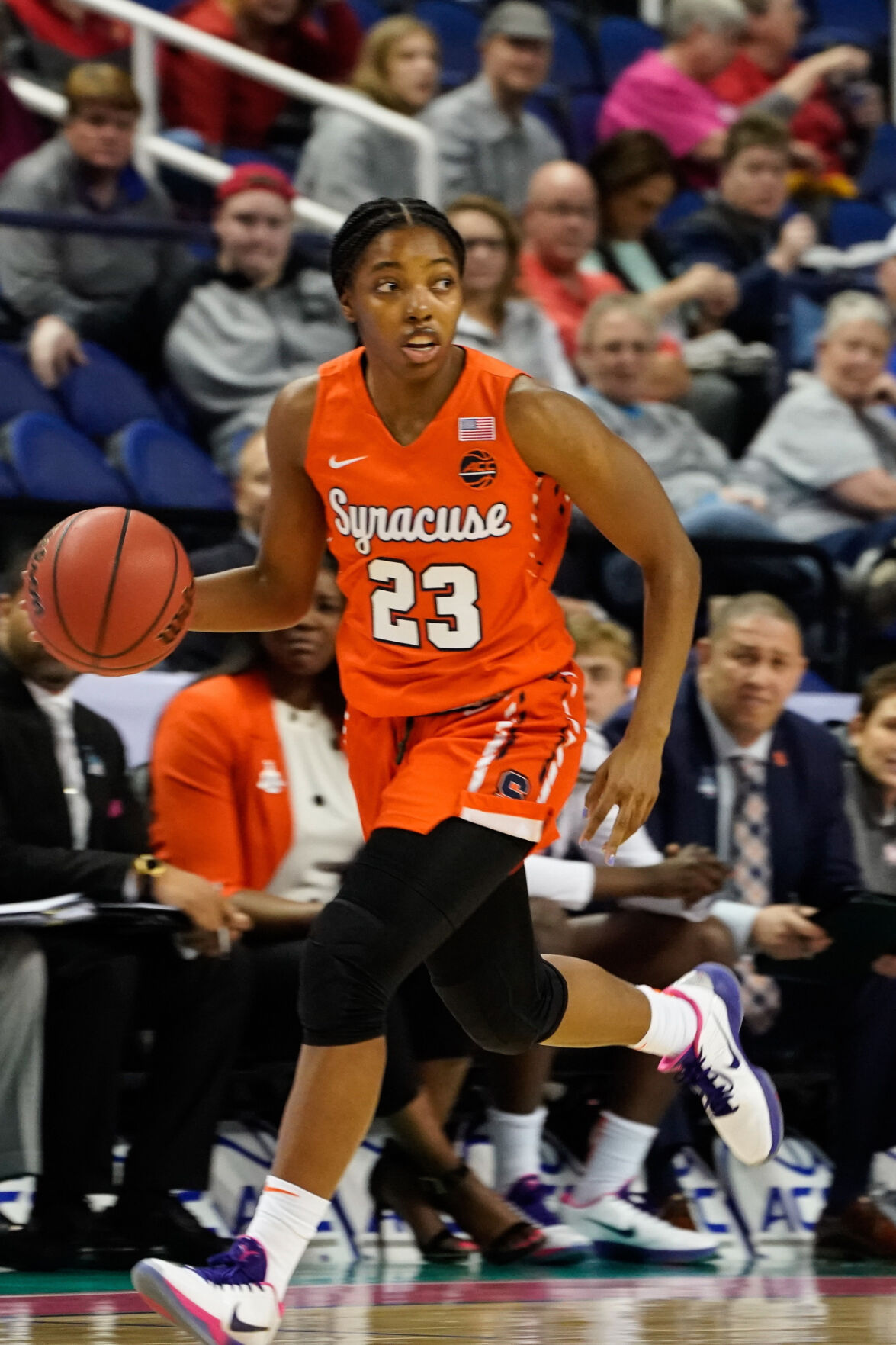 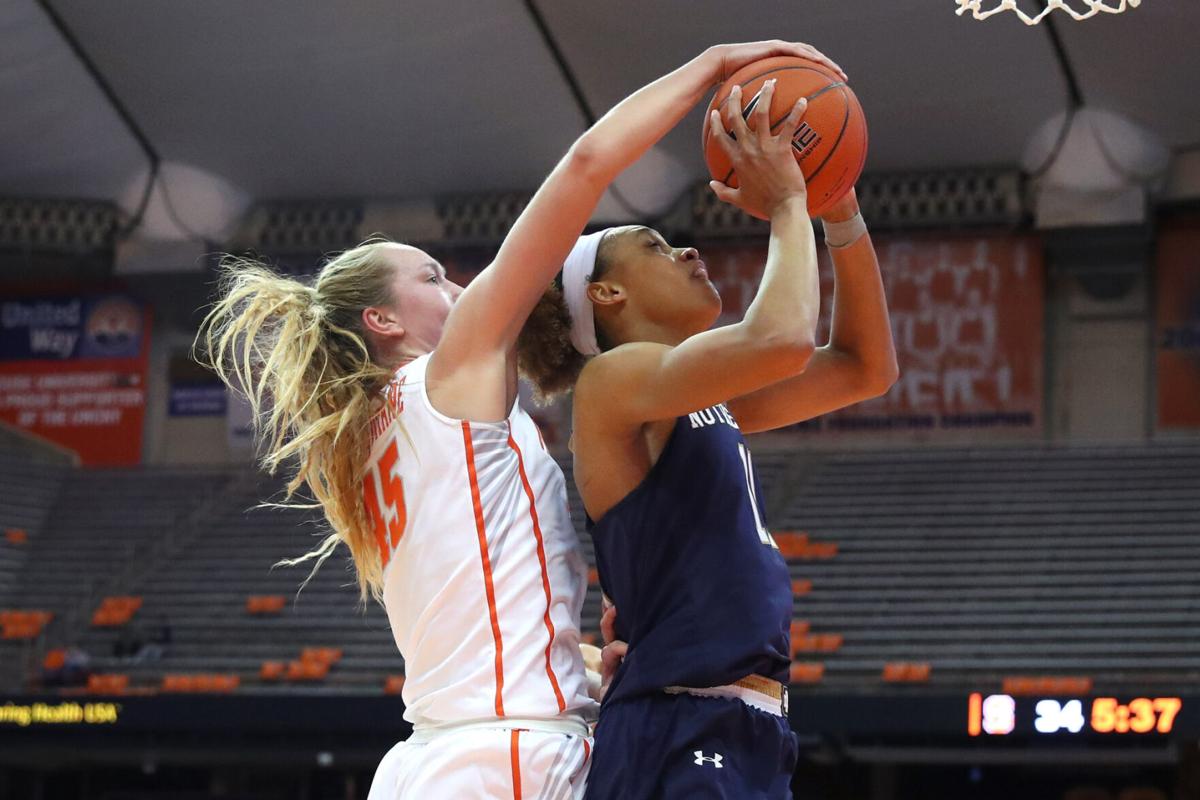 Syracuse forward Digna Strautmane, left, blocks the shot by Notre Dame forward Brianna Turner but is called for a foul on Feb. 25, 2019 at the Carrier Dome. Rich Barnes/USA TODAY Sports 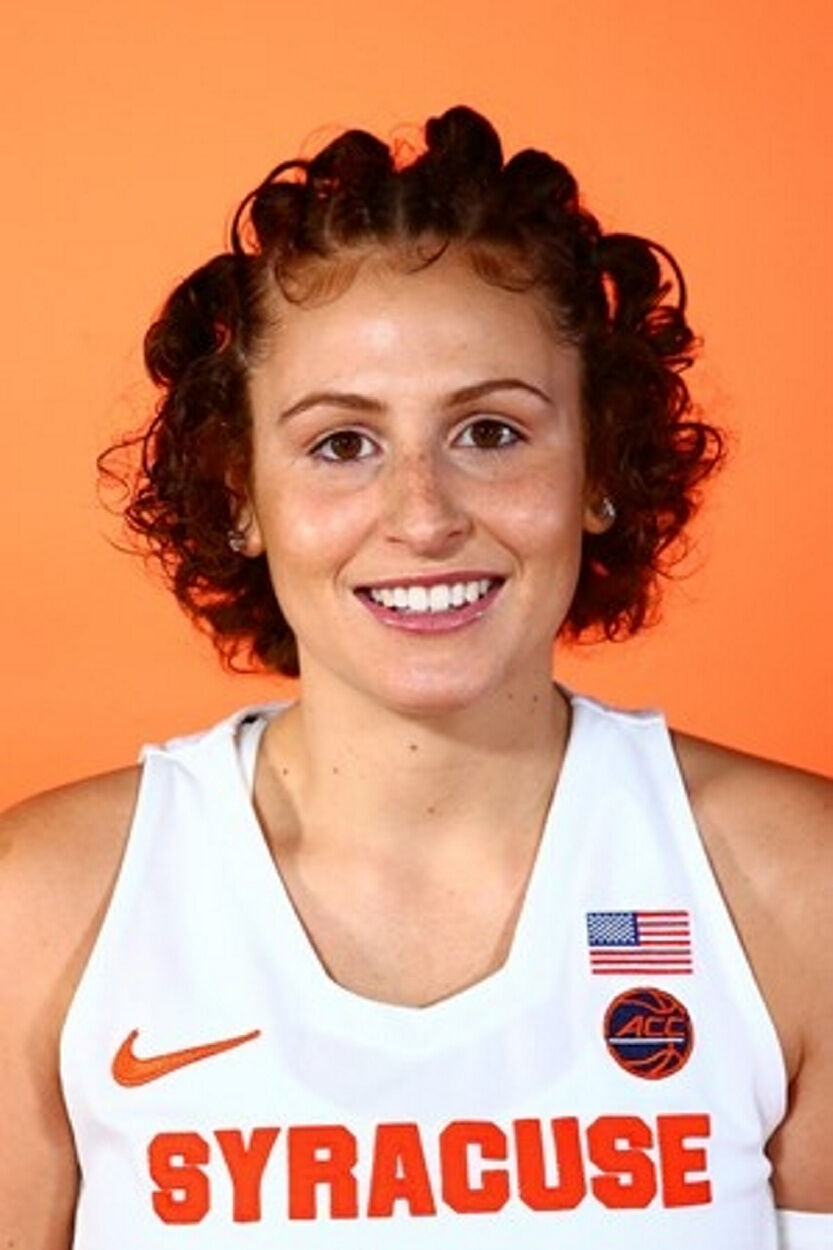 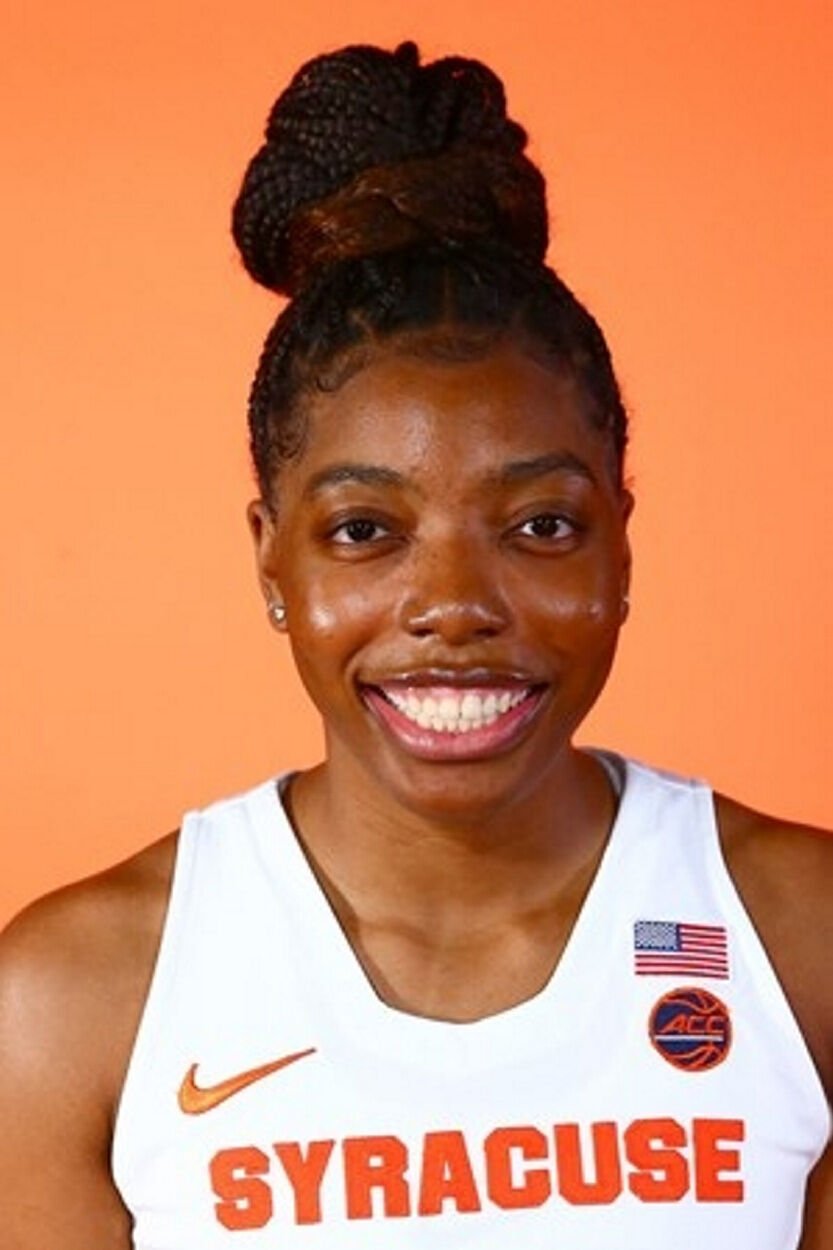 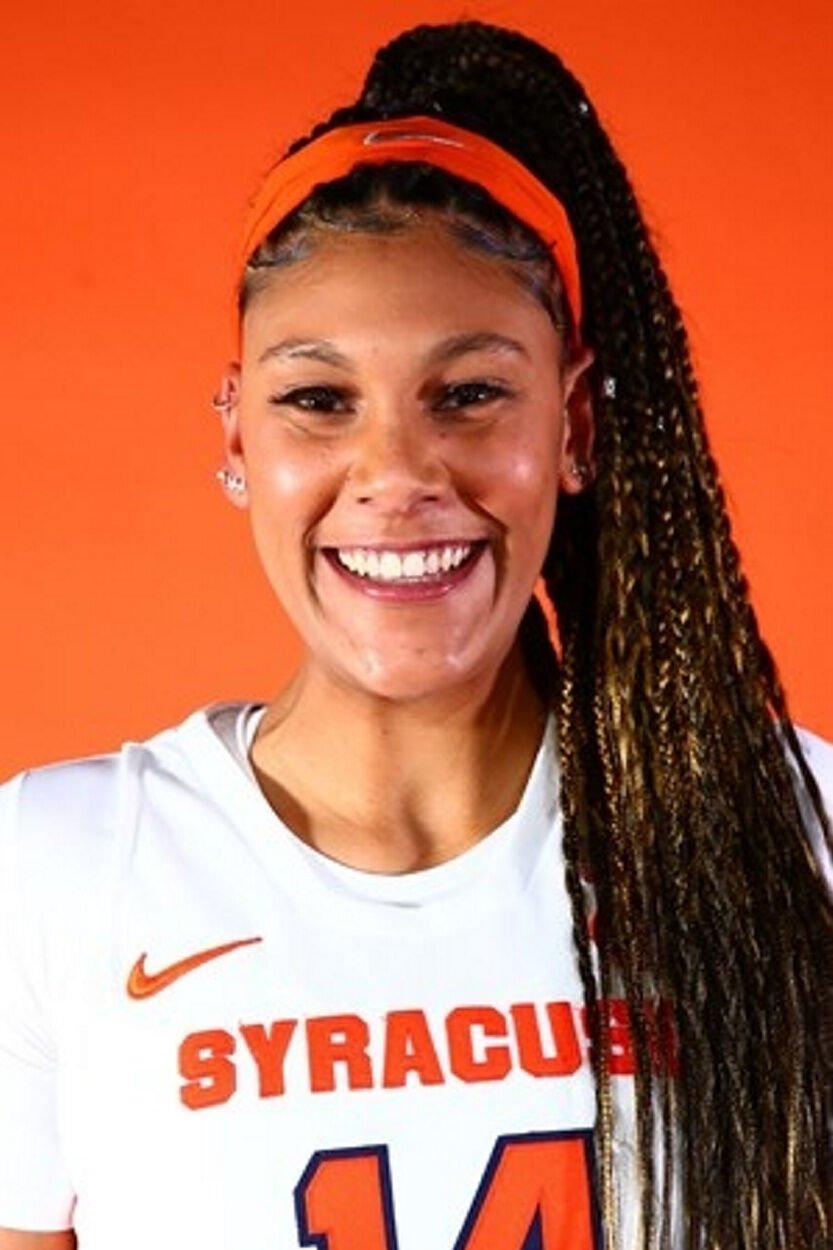 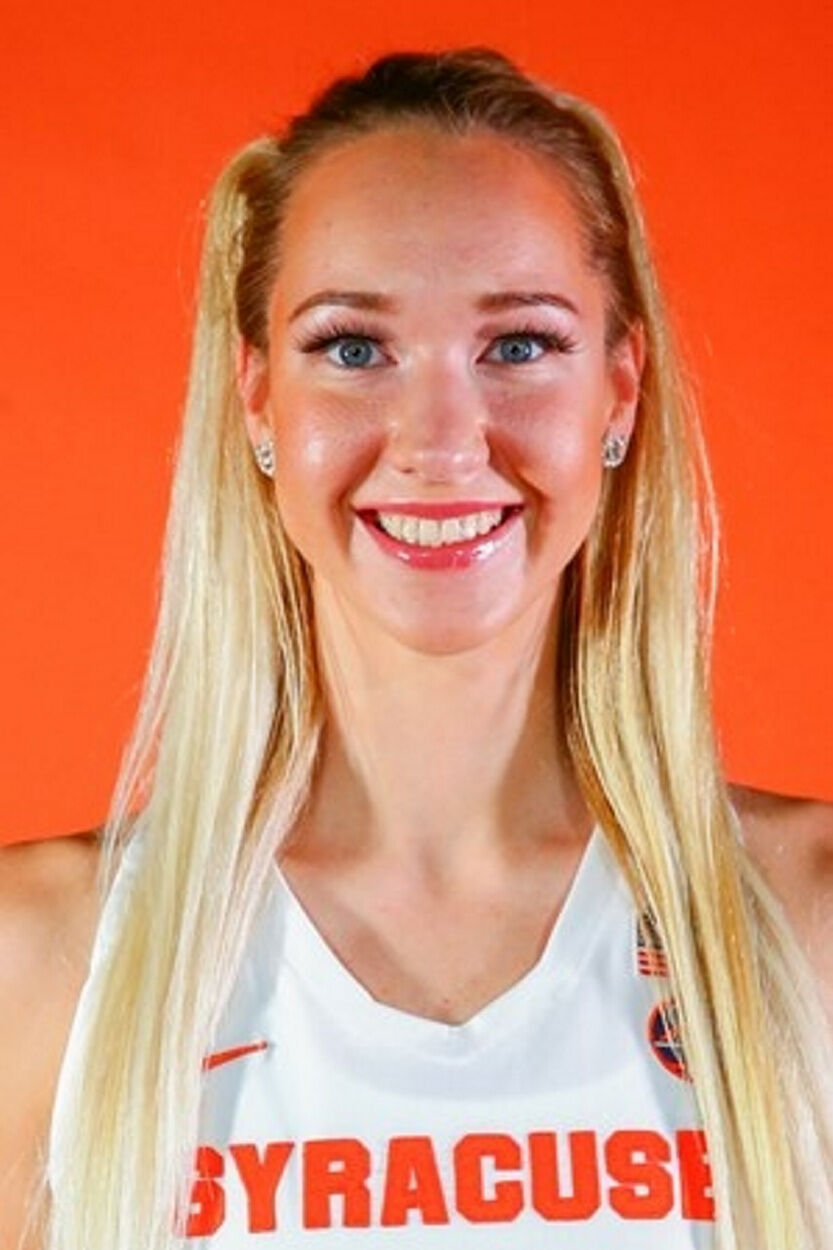 Syracuse forward Digna Strautmane, left, blocks the shot by Notre Dame forward Brianna Turner but is called for a foul on Feb. 25, 2019 at the Carrier Dome. Rich Barnes/USA TODAY Sports

The Syracuse University women’s basketball team has fully embraced heightened expectations as it embarks on one of the most anticipated seasons in program history.

The Orange will enter the new campaign with four of five starters returning, one of the nation’s top point guards making her inspirational comeback, and a top-five debuting class, which combined creates the deepest, most talent-rich roster in coach Quentin Hillsman’s 15 years at the helm.

Syracuse is scheduled to begin with a nonconference road game at 2 p.m. Sunday at Stony Brook.

“I probably put more pressure and have higher expectations of them than anybody, so they already have that kind of pressure on our team,” Hillsman said. “I make sure that they understand that we are here to win games and win a championship, so this is no different for us.”

The Orange is ranked 21st nationally in the Preseason Coaches Poll and 23rd in the Associated Press Preseason Top 25, while being picked to finish third in the Atlantic Coast Conference Preseason Media Poll.

Emily Engstler — one of four starters back from a team that finished 16-15 overall and 9-9 in the ACC last year — said that this year’s SU squad is the best she has seen since she was first recruited by the program at age 14 and believes it to be a top-five team in the country.

“We could have The Hulk and we’d be the 30th team in the country, so I don’t think that we really care (about the polls) because we’re always underrated, and honestly this is the first year that I feel 120 percent confident that we can finally prove everybody wrong,” Engstler said.

The confidence of veteran Orange players begins in the backcourt with fifth-year seniors Tiana Mangakahia and Kiara Lewis, each of whom were named to The Naismith Trophy Watch List that recognizes the national player of the year.

Mangakahia will make her long-awaited return after missing the 2019-20 campaign to recover from Stage 2 breast cancer. She was declared cancer-free in November 2019 and granted an extension of eligibility waiver to return for a final year with the Orange in October.

The 5-foot-6 point guard holds the SU record with 591 career assists and scored 1,114 points in her previous two seasons with the team, becoming the fastest in team history to eclipse the 1,000-point mark while starting every game in that span.

Hillsman said that Mangakahia has recaptured her All-American form during preseason practices.

“To have the ball in a veteran point guard’s hands is all you can ask for, is to have somebody running your show that knows what they’re doing and has an ability that I believe no one else has in this country right now,” Hillsman said. “She’s an amazing player, she’s playing well, and I think she’s a little harder on herself than I am right now.”

Lewis is a returning All-ACC first team selection who led SU in scoring with 17.3 points per game while starting all 31 games last year. She is also on the watch list for The Drysdale Award, presented to the nation’s top shooting guard.

The SU veterans, most of whom have been on campus since July for voluntary workouts, said that they have not tried to shy away from the buzz over the team in recent months.

“Even when we would go to stores and stuff people are like: ‘Oh my gosh, you guys are going to be so good this season,’ and we’re like: ‘Yeah, we are,’” Strautmane said. “We know that we can be very good but we don’t want to get it in our heads, we try to work very hard on the court so that it will show. ... We just have to show it with our actions.”

The fourth-ranked incoming freshman class that features 6-foot-7 center Kamilla Cardoso as one of two players ranked in the top 10 nationally should further bolster the Orange depth and allow Hillsman to play to the fast-paced, full-court pressure style that he prefers.

Here is a look at the SU women’s basketball team by position.

Mangakahia and Lewis are expected to share the starting backcourt and appear poised to become one of the premiere tandems in the country. ... Freshmen guards Priscilla Williams and Kiara Fisher each project to contribute off the bench. Williams is a 6-foot-2, McDonald’s All-American recently ranked as the No. 22 “impact newcomer,” by ESPN. Fisher is a 5-foot-7 all-state guard from Elmira that Hillsman labeled as a player that could surprise this season. ... Sophomores Taleah Washington, Teisha Hyman, and senior Lauren Fitzmaurice figure to be next in line vying to push for minutes.

Strautmane and Engstler are back after each started all 31 games for SU last year. Strautmane, the 6-foot-2 senior, has recorded 127 career blocks while starting all 96 games of her career to date. She averaged 8.7 points and 4.6 rebounds per game, made 54 total 3-pointers and shot 85.7 percent on free throws last year. Engstler is a 6-foot-1 wing from St. Francis Prep who averaged 9 points and 9 rebounds per game while leading SU in total rebounds (286) and blocks (50) last year. ... Maeva Djaldi-Tabdi is likely to again fill a key reserve role after the 6-foot-2 redshirt junior averaged 8 points, 3.5 rebounds, and 1.5 blocks in 16.5 minutes per game last year.

Senior Amaya Finklea-Guity will likely maintain her starting role while prized recruit Kamilla Cardoso pushes for significant minutes off the bench. The 6-foot-4 Finklea-Guity has been among the starting five for all 96 games of her SU career, contributing averages of 6.6 points and 5.1 rebounds a season ago. ... Cardoso is the 6-foot-7 freshman who was named a First Team All-American and McDonald’s All-American last year. She was rated as the No. 5 prospect of the incoming freshman class and recently named to the Lisa Leslie Award Watch List to honor the top center in the country.