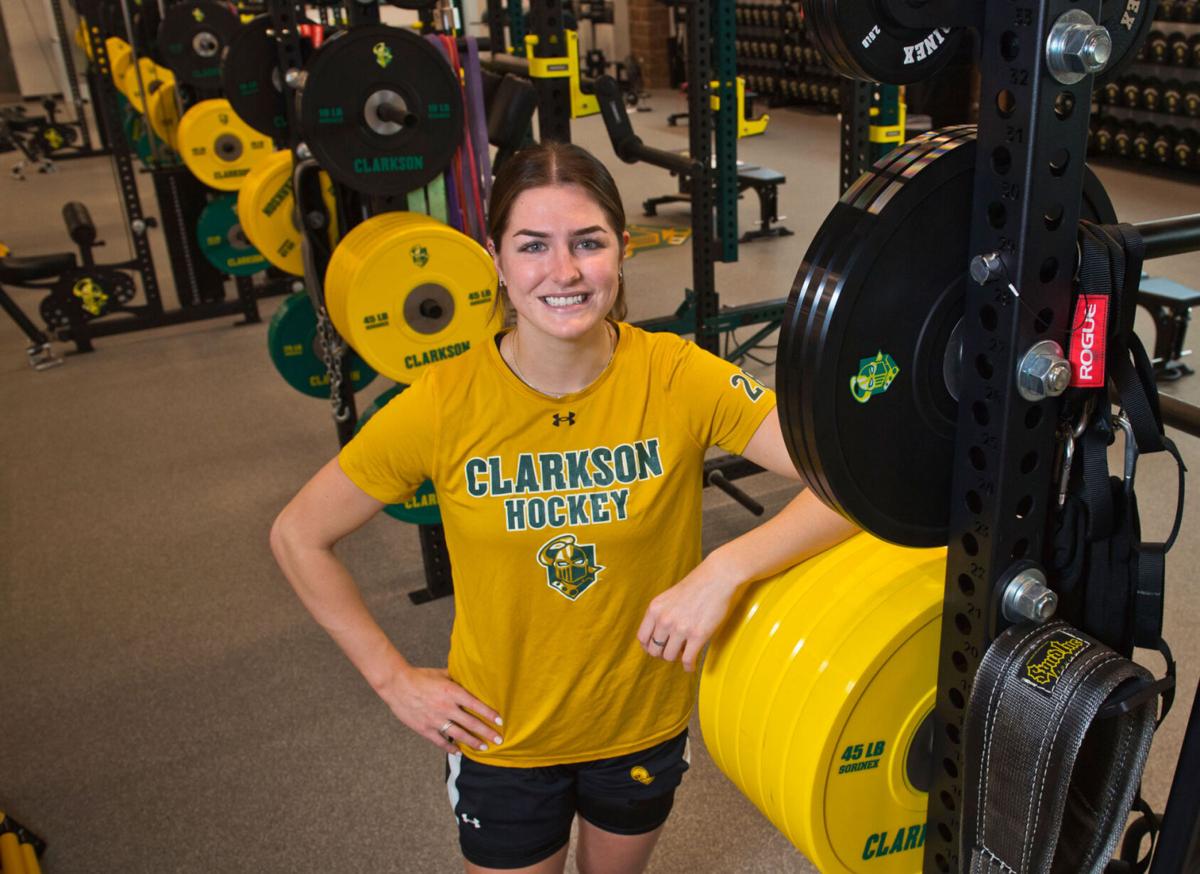 Clarkson forward Brooke McQuigge provides the muscle for the Golden Knights with her physical style on the ice. Christopher Lenney/Watertown Daily Times 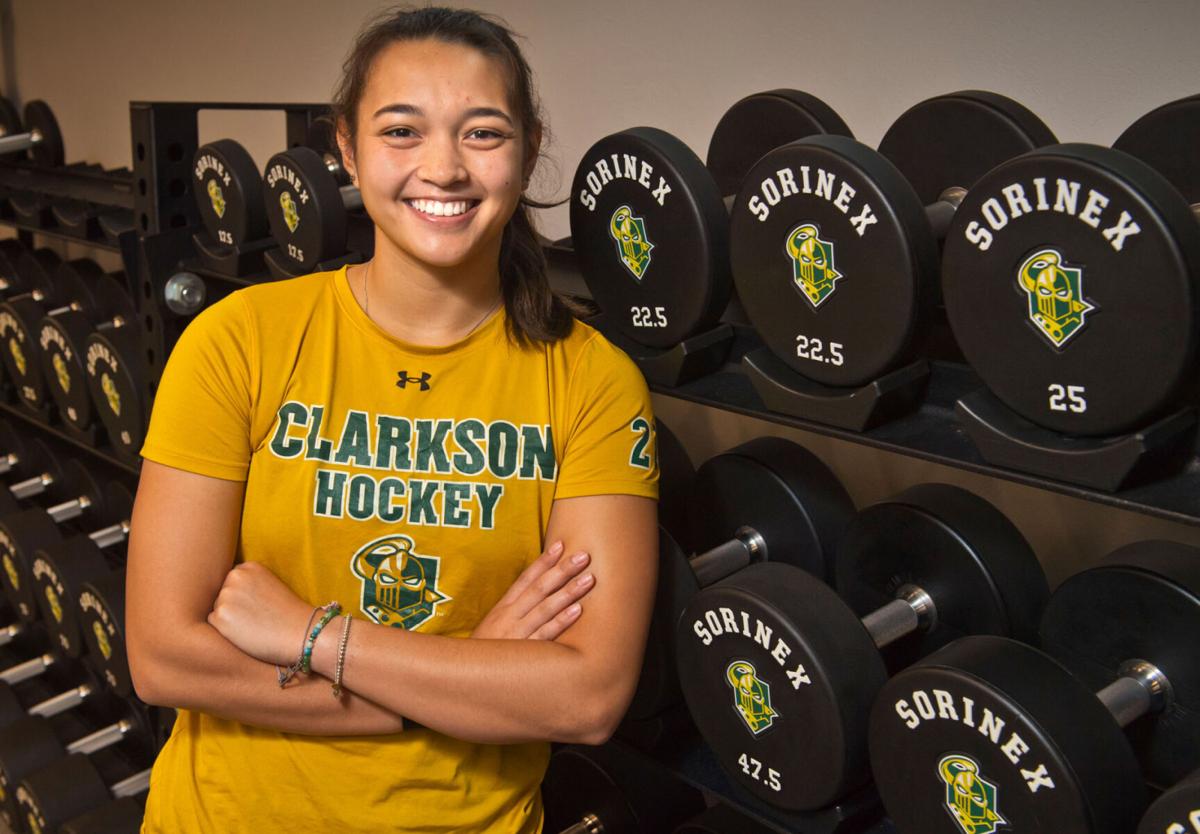 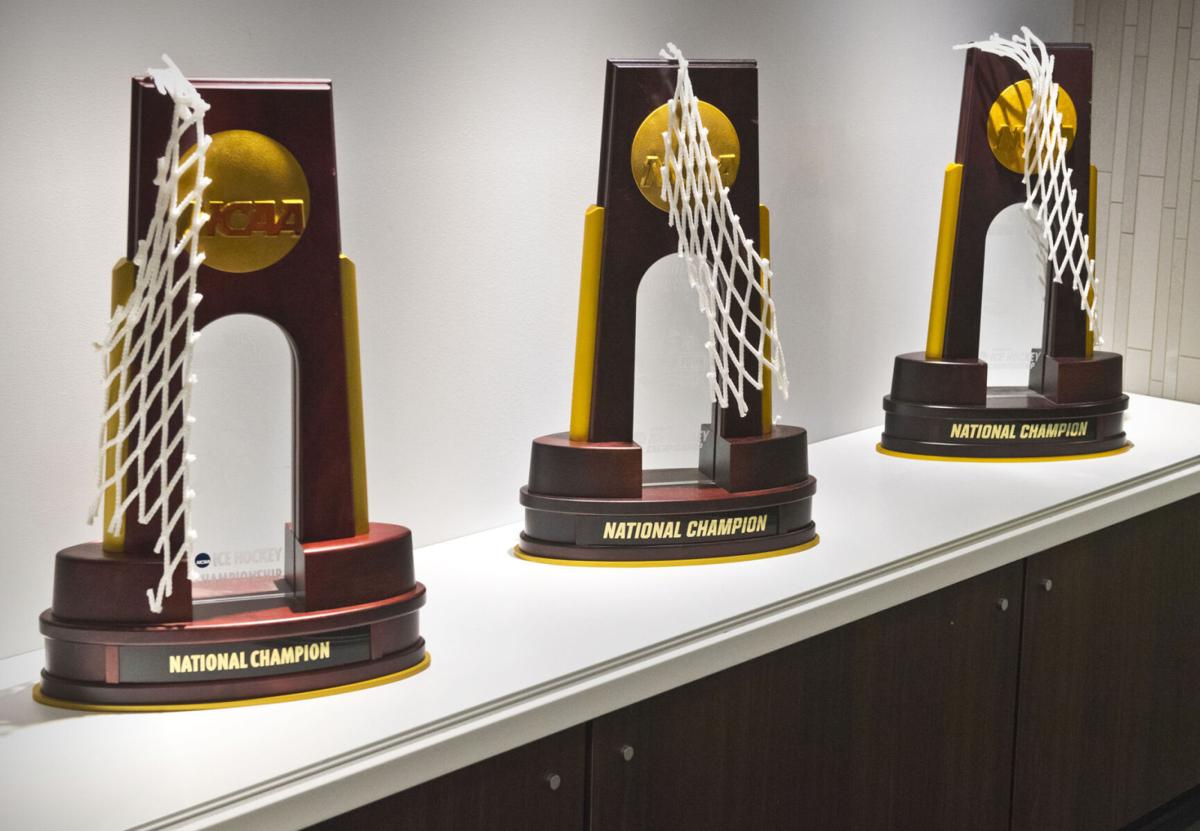 Clarkson forward Brooke McQuigge provides the muscle for the Golden Knights with her physical style on the ice. Christopher Lenney/Watertown Daily Times

“You don’t see a lot of players like her anymore, with that work ethic, that battle mentality,” Clarkson women’s coach Matt Desrosiers said. “She plays a rough, tough style of game. It is very difficult to play against. When she goes into a loose puck battle, she is going to come out with it no matter what. You don’t find that kind of compete-level in players as much anymore. Her teammates see that competing against her in practice. She ups the level in practices.”

McQuigge, who is 5 feet, 8 inches, plays a physical game on the ice and has emerged as a productive player at Clarkson during her first two seasons.

As a freshman she posted eight goals and nine assists in 37 games, and last year, in just 19 games, she totaled seven goals and 11 assists.

“The years kind of flew by,” McQuigge said. “It’s kind of crazy that I’m already a junior. Both seasons were kind of cut short.

“I think I’m in more of a leadership role (this season). I have to be more vocal and use my experience and share it, trying to help the younger players coming up. I think I’ve gotten a lot more confidence and am a lot more offensive. I used to think of myself as more of a defensive player, but over the years I’ve played with a lot of great players and become more offensive, I think.”

McQuigge earned so much trust from Desrosiers that as a freshman she was put on a forward line with Elizabeth Giguere, who would go on to win the Patty Kazmaier Award that season.

“She’s so good,” McQuigge said of Giguere, who now is at Minnesota-Duluth. “I learned a lot from her. I’m going to miss playing with her a lot. It was a lot of fun and I gained a lot of experience with her that helped me grow as a player.”

Last year Giguere said she appreciated the physical role McQuigge brought to her line, protecting her in some ways from opposing teams trying to hit her.

“(McQuigge) is one of those players that are really good at complementing other players,” Desrosiers said. “She’s someone I think everyone wants to play with. She’s able to get in there, get loose pucks and create loose pucks. She has skill, too. She can make plays when she has the puck and can put the puck in the back of the net.”

Playing with Giguere was a big highlight for McQuigge in her freshman year, but her biggest moment came on Feb. 22, 2019, when she scored a goal against her older sister, Rachel, who is a fifth-year senior at Princeton this season.

The Tigers won the game 2-1 so that neutralized a bit of the bragging rights for either sister.

“Right after the play I was super excited,” McQuigge said. “I didn’t even know it went in until the ref called it. After the game we did a little bit of talking and she said since she won the game it was kind of even that I scored.”

In addition to playing against her older sister, McQuigge is also now teammates with her younger sister, Kirstyn, who joined the team midway through last season.

Kirstyn McQuigge played in just nine games before getting injured, but in their first game together each sister scored a goal in a 5-1 win over Long Island.

“We’re really close, all three of us,” McQuigge said. “It’s nice to play against an older sister but also have a younger sister here with me. It’s a lot of fun. I think I’m a lot more physical (than Kirstyn) and she’s more patient and poised.”

Desrosiers is looking forward to two, and possibly three more seasons, with Brooke McQuigge on the roster.

“I’m really happy with her development so far,” Desrosiers said. “I think the biggest thing is just the confidence level that she is starting to have. I think she’s starting to believe that she can be a top-line player, put points up, but also be a good defensive player as well, someone that you can rely on in a lot of different situations.

Last season was one the Golden Knights would like to forget as Clarkson struggled to an 8-10-1 overall record and a 3-6 mark in conference play.

The offseason was also difficult for Clarkson as 2020 Patty Kazmaier winner Elizabeth Giguere, the program’s all-time leading scorer, transferred to Minnesota-Duluth and four other players also moved on to other schools.

But opposing teams shouldn’t feel too sorry for the Golden Knights, who return Patty Kazmaier top 10 finalist Caitrin Lonergan, as well as talented sophomore defenseman Nicole Gosling, among others.

“This year seems like a normal year and we are on the right pace for a normal year,” Gosling said. “The girls have really bought into everything. I’m looking forward to what a real season is like, playing more than three other teams.”

Said Desrosiers, “Last year was such a weird, crazy year with so many different things, all the different protocols and quarantines. You never knew what was going on throughout the country.

“We’re just excited to have somewhat of a normal season. We hopefully play more than just three teams. There’s an excitement around the group right now.”