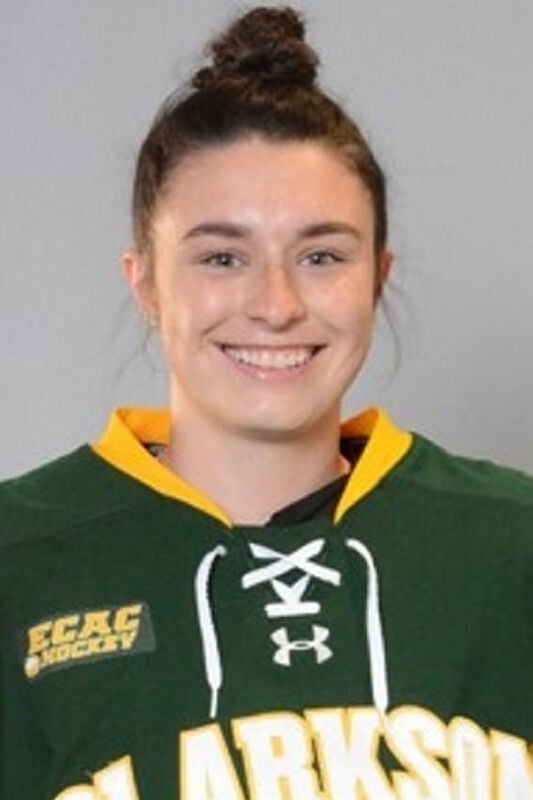 The ceremony was supposed to take place during the women’s Frozen Four on March 21, but the season ended a day before the NCAA Tournament was scheduled to begin.

Clarkson, which went 25-6-6 overall last year, still has not played a game this season, but is hoping to get a few nonconference games in before the 2021 portion of the schedule and begin ECAC Hockey competition after New Year’s Day.

“In kind of a dark period for the world, what more could we ask for than to celebrate a Golden Knight?” said Clarkson president Tony Collins to open the ceremony, which was broadcast on the Clarkson Athletics YouTube channel. “Elizabeth Giguere, I think represents the institution not only athletically and academically, but kind of heart and soul, and her personality is what I think we should be talking about today.”

Collins, who was wearing a green-and-gold mask on his face, presented the trophy to Giguere and the two posed for a photo in front of a large video screen, which later was used to display a film with information on the Patty Kazmaier Award, as well as highlights of last year’s finalists, which included Wisconsin’s Abby Roque, who was born in Potsdam, and Northeastern’s Alina Mueller.

After the video ended, the screen projected a large photo of Giguere holding the school’s smaller replica version of the Patty Kazmaier Award.

Giguere, who often deflects attention from herself, saw her giant image and said, “That’s a big picture of me.”

Giguere immediately thanked the school administration, coaches, her family and her teammates as she read from her acceptance speech.

“Thank you for always pushing me through everything we do,” Giguere said to her teammates, who were in attendance. “Last year we had maybe a tough year where we had to go through things, but we didn’t stop. I’m really proud of us. While this award is an individual one, it is symbolic of the team and the university around me. I’d also like thank my classmates here on campus. These aren’t normal times, but we all have done our parts to stay safe and keep this campus going strong. I’m proud to be a Clarkson student.”