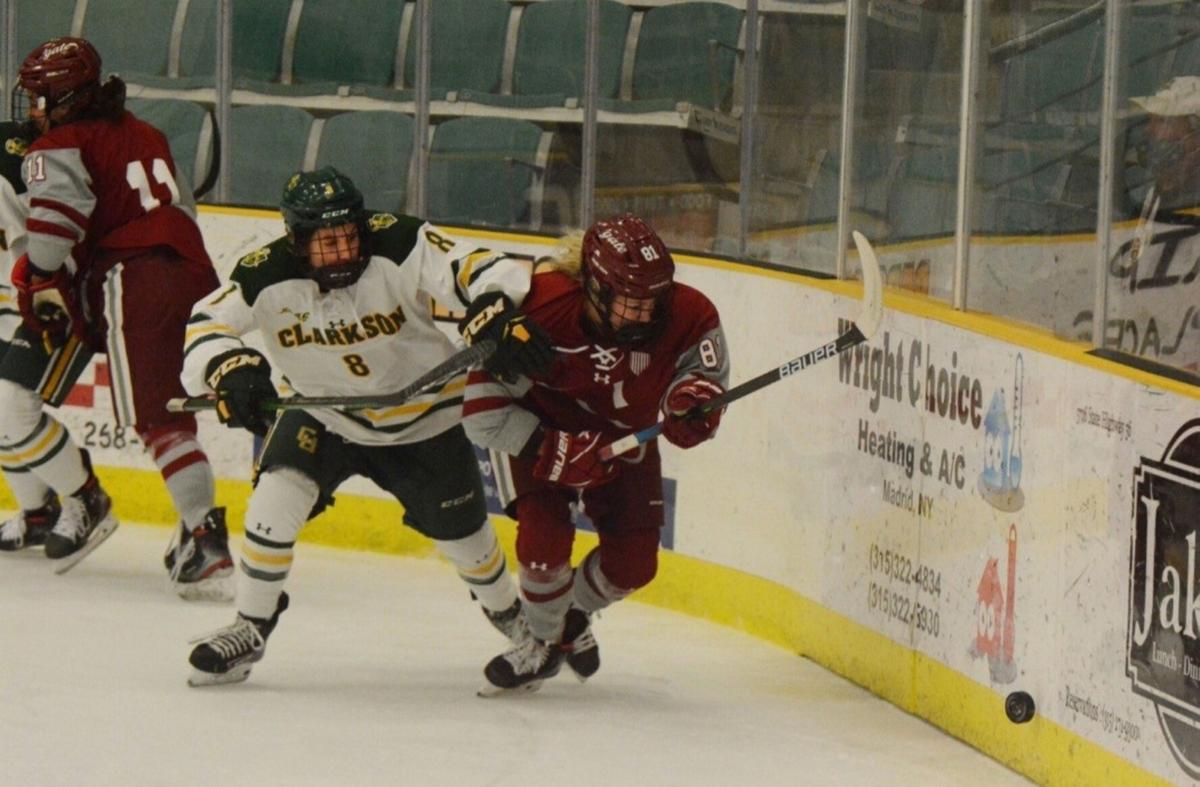 Clarkson’s Gabrielle David, left, tangles for the puck along the boards with Colgate’s Rosy Demers on Saturday. Clarkson University photo 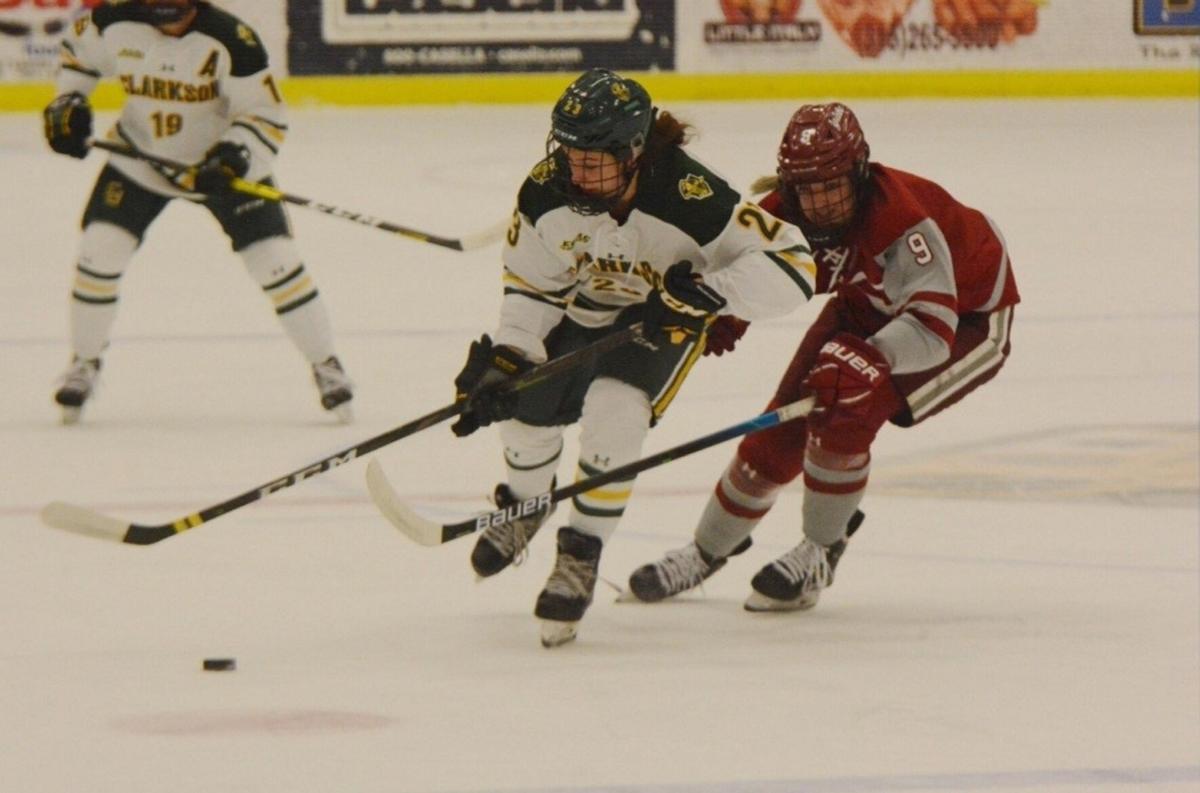 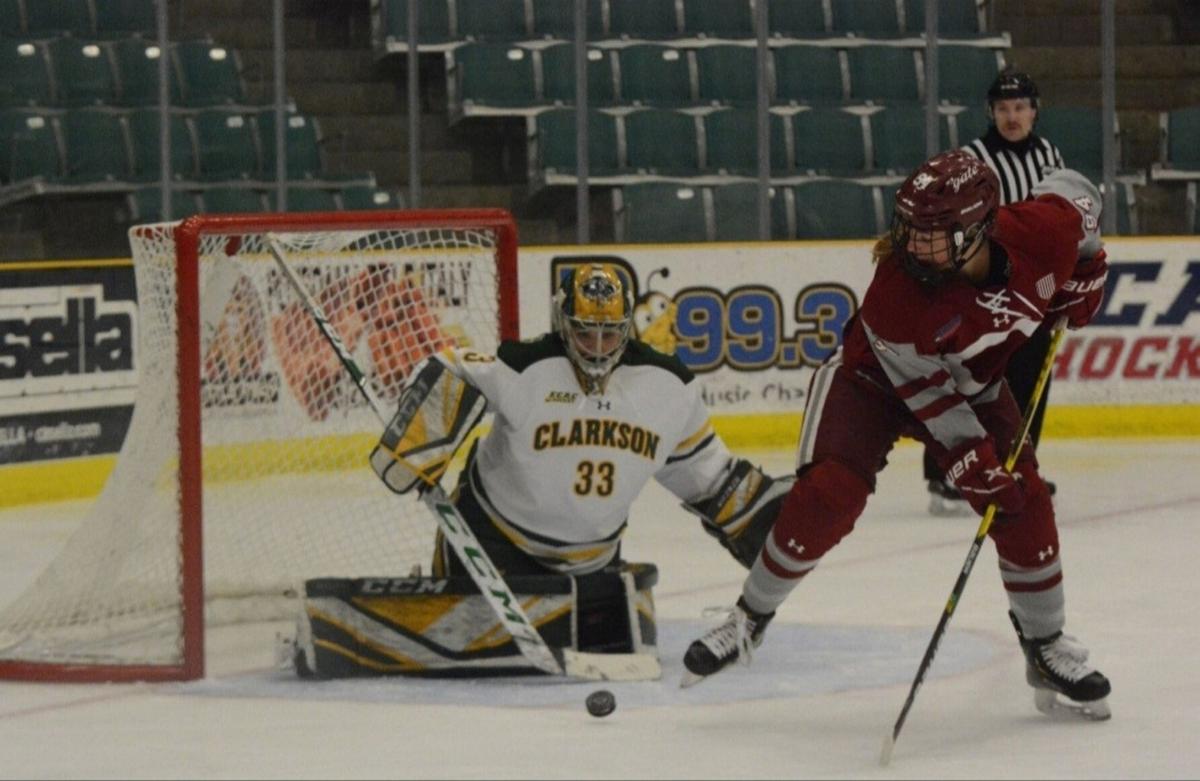 Clarkson’s Gabrielle David, left, tangles for the puck along the boards with Colgate’s Rosy Demers on Saturday. Clarkson University photo

But on Saturday the Raiders snapped a five-game winless streak against fifth-ranked Clarkson and spoiled the Golden Knights’ home and season opener with a 3-1 victory in a nonconference game in an empty Cheel Arena.

The Raiders (3-0 overall), who are tied for ninth in the national rankings, got started last weekend with a pair of nonconference wins against Syracuse and brought a veteran team into Cheel Arena with 20 of the 21 players back from last year’s roster. Clarkson, meanwhile, was playing its first game since losing 5-1 to Princeton in an ECAC Hockey semifinal at Cornell on March 7.

“Colgate is a pretty deep team and a talented team,” Clarkson coach Matt Desrosiers said. “They didn’t really graduate anyone from last year’s team, so they already have that kind of built-in familiarity between each other and a little bit of that chemistry. They can definitely score goals and make you pay for making mistakes, and that’s what we saw today. A couple little mistakes ended up in the back of our net, and that’s what’s going to happen against a talented team like that.”

Clarkson started off well, outshooting the Raiders 11-5 in the opening period. Clarkson’s defending Patty Kazmaier winner. Elizabeth Giguere, received her first breakaway chance of the season just 8 minutes, 31 seconds into the opening period to no avail, and the Golden Knights missed another scoring chance on a two-on-one breakaway at 11:15 when a shot from Tia Stoddard went just over the crossbar.

Brooke McQuigge also produced a good scoring chance on a rebound attempt just 30 seconds into the second period, and 10 seconds later, Gabrielle David just missed the puck on a one-timer attempt on a pass from Giguere.

But a Clarkson turnover in its own zone led to the first goal of the game on a shot from Colgate’s Kristyna Kaltounkova at 1:31 of the second period.

Sammy Smigliani scored the first, off a pass from Tanner Gates, at 10:23 and Kaltounkova added her second goal on a shot from the circle at 11:06.

“I was actually happy with our first period,” Desrosiers said. “I thought we came out with some good energy, we were playing within our systems. I think in the second period things got a little bit sloppier from our end. You can attribute some of that to just not having the ability to play for a while, with all the disruptions throughout the first semester, just not having the kind of chemistry you kind of want at this point in the season. I thought we did some good things as well that we can kind of build off of. There are a few little things we need to work on and some adjustments we have to make.

Senior defenseman Avery Mitchell kept Clarkson from being shut out when she scored at 17:34 of the third period on a shot from the circle.

“We were just trying to get shots on net,” Mitchell said. “I had a pretty open lane there. I saw (Giguere) in front of the net, she was screening. I was hoping to create a scrum or something up front, but that one actually went in. It’s definitely a huge energy boost. We went the whole game without getting a goal and 3-0 is a tough pill to swallow in the first game. Getting one goal is a big difference.”

Clarkson are scheduled to face the Raiders three more times this coming week, including games in Hamilton on Monday and Thursday at 5 p.m. and another home game on Saturday at 4 p.m.