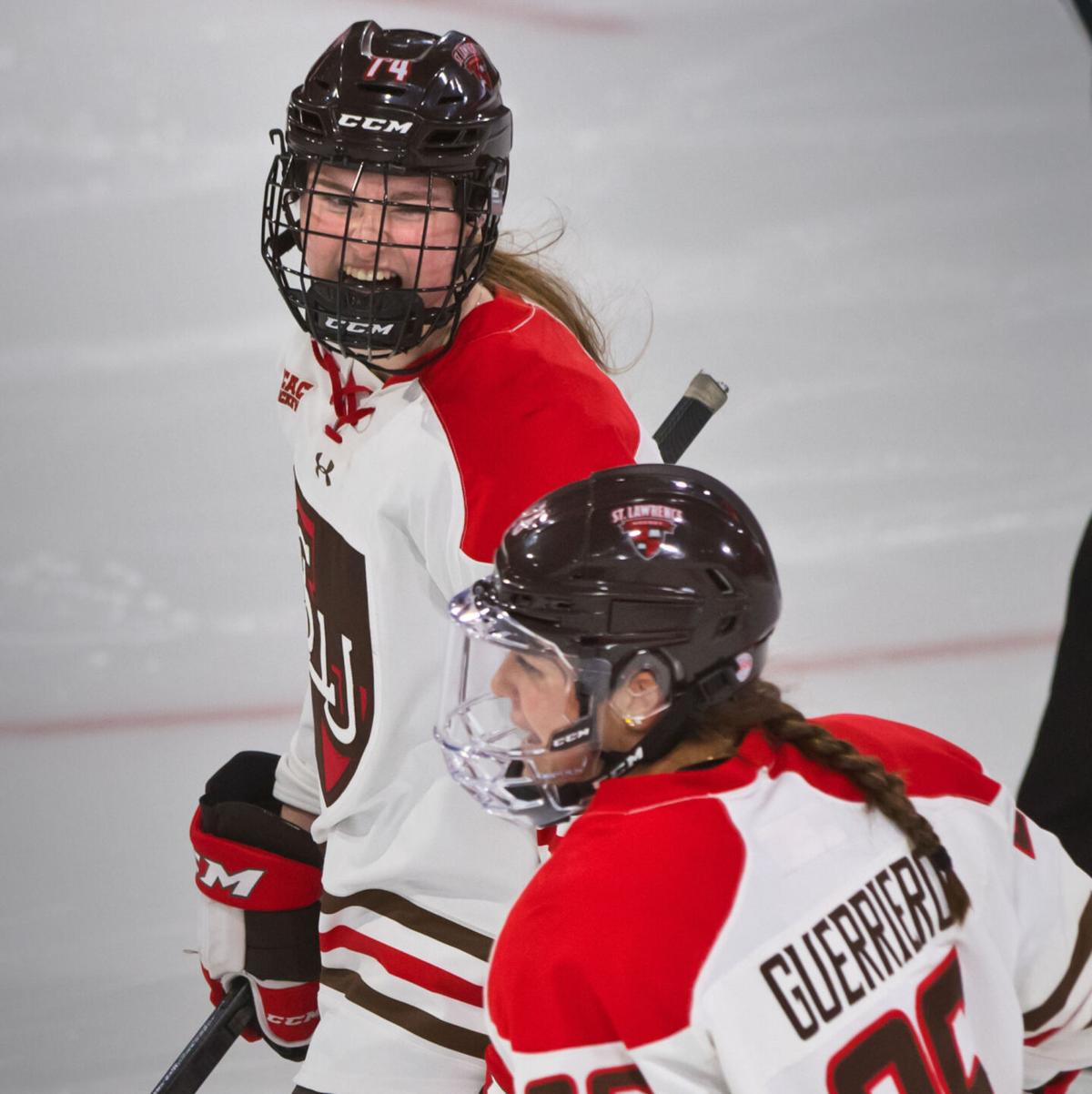 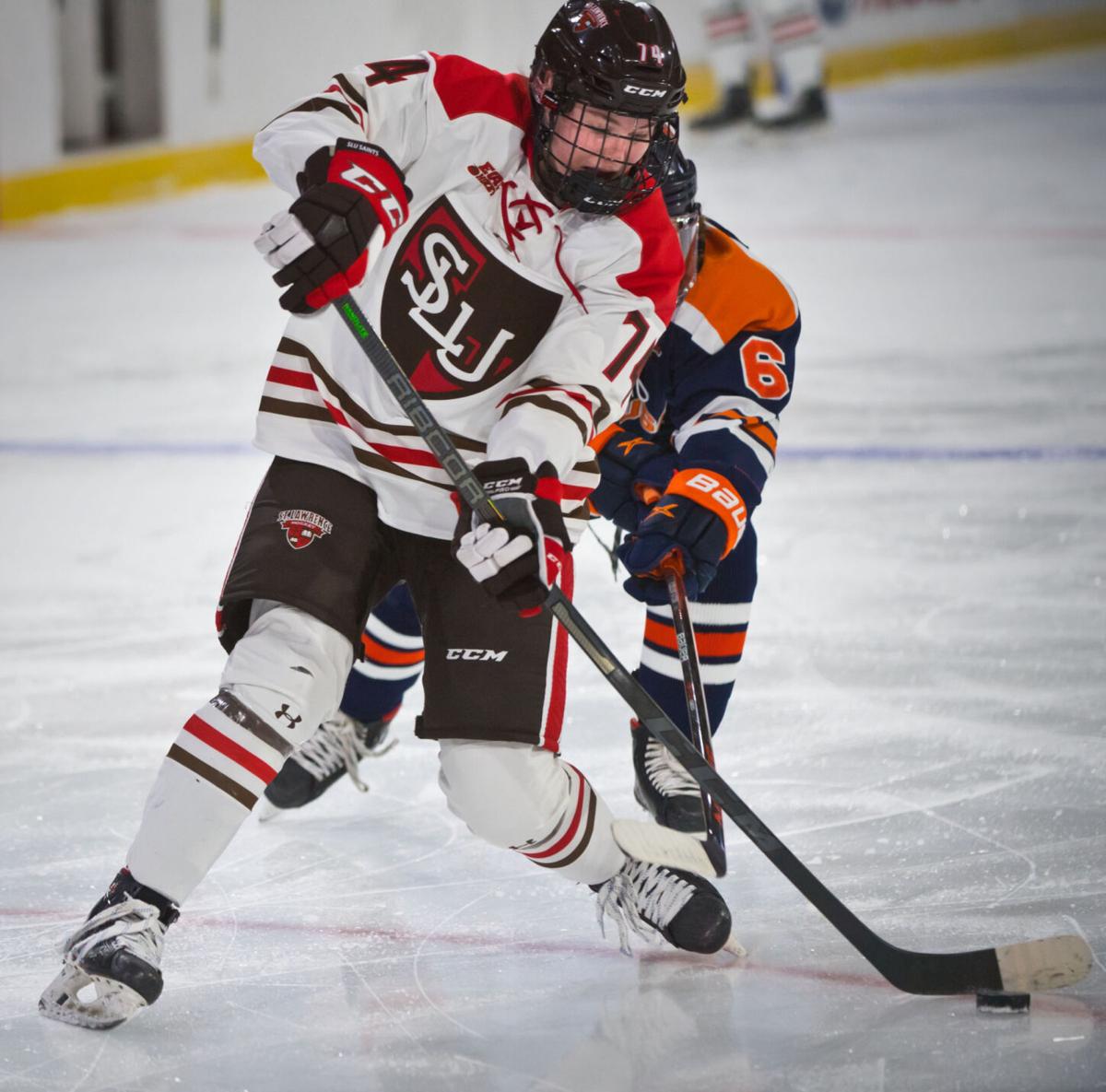 CANTON — Goal production was a concern when the St. Lawrence University women’s hockey season started as three of last year’s top-six scorers have been away trying to make the 2022 Winter Olympic teams.

Also away is the team’s sixth-leading scorer last year Taylor Lum (1-5), who also is trying to make China’s team.

One freshman helping to make up for the lost scoring is forward Abby Hustler, a 5-foot-9, 18-year-old from St. Louis, Prince Edward Island in Canada.

Hustler leads the Saints in scoring with four goals and eight assists through 16 games.

“I’ve kind of given up on trying to project where freshmen are going to be,” Saints coach Chris Wells said. “We felt like she would be someone who would be near the top of our team, in terms of points. She’s been able to do that and she’s getting her chances, working hard and having a lot of fun. The kids enjoy getting out and playing with each other and Abby is one of those kids that enjoys it.

“She came in and she did some really good things right off the bat. She has good puck control. She makes some good plays and she’s got a good stick. She can shoot it well. I’m really looking forward to seeing how she progresses. She thinks the game well and she works hard on thinking the game. She’s very passionate about what she does. She puts a lot of stock and effort on what she does.”

Hustler missed last season due to COVID-19, but in her final year before coming to SLUm she supplied 35 goals and 28 assists in 48 games for the Ontario Hockey Academy Tardiff midget team.

“As a forward, coming out of juniors, I really wanted to focus on my defensive zone,” Hustler said. “We are all focused on offense in high school and throughout our young careers. I feel that I’m working towards (defense) and it’s coming along good.”

The transition to college has been a smooth one for Hustler, who picked up two assists in her second game with the Saints and scored her first career goal against Clarkson in her fifth game.

“After the first series against Penn State I really started to settle in and realized the speed and getting used to my teammates,” Hustler said. “It took a couple games, but I feel like I’m there now and still improving.”

Hustler has not gotten the chance to play yet with her future teammates trying to make the Olympics, but she has seen their absence as a chance for her to contribute even more.

“I’m sure we’d like to have our big players back, but for someone like me it gives me an opportunity to display everything I need to,” Hustler said.

If the season ended today the Clarkson women’s hockey team, which is 12-2-2, would have missed out on the NCAA Tournament, under the old eight-team field format.

But now, thanks to a decision by the Division I Competition Oversight Committee on Tuesday, The Golden Knights would be a bubble team, as the field has been expanded to 11 teams.

Clarkson is ranked 10th in the PairWise Rankings, which set the field. Each conference with at least six teams also has an automatic bid to their tournament winner.

The top five teams will receive a first-round bye in the new format, which right now would include Wisconsin, Ohio State, Quinnipiac, Minnesota and Yale.

Three first-round games will be played at the site of one of the top four teams with the winner playing that team two days later in the quarterfinals.

If the selection committee goes strictly by the rankings, which they have not always done in the past, the No. 1 team will face the winner of an 8-9 game. The No. 4 team will play No. 5.

The No. 2 team will play the winner of a 7-10 game, which right now would mean Clarkson facing Northeastern with the winner playing Ohio State.

This year’s Frozen Four will be held at Penn State from March 18-20.