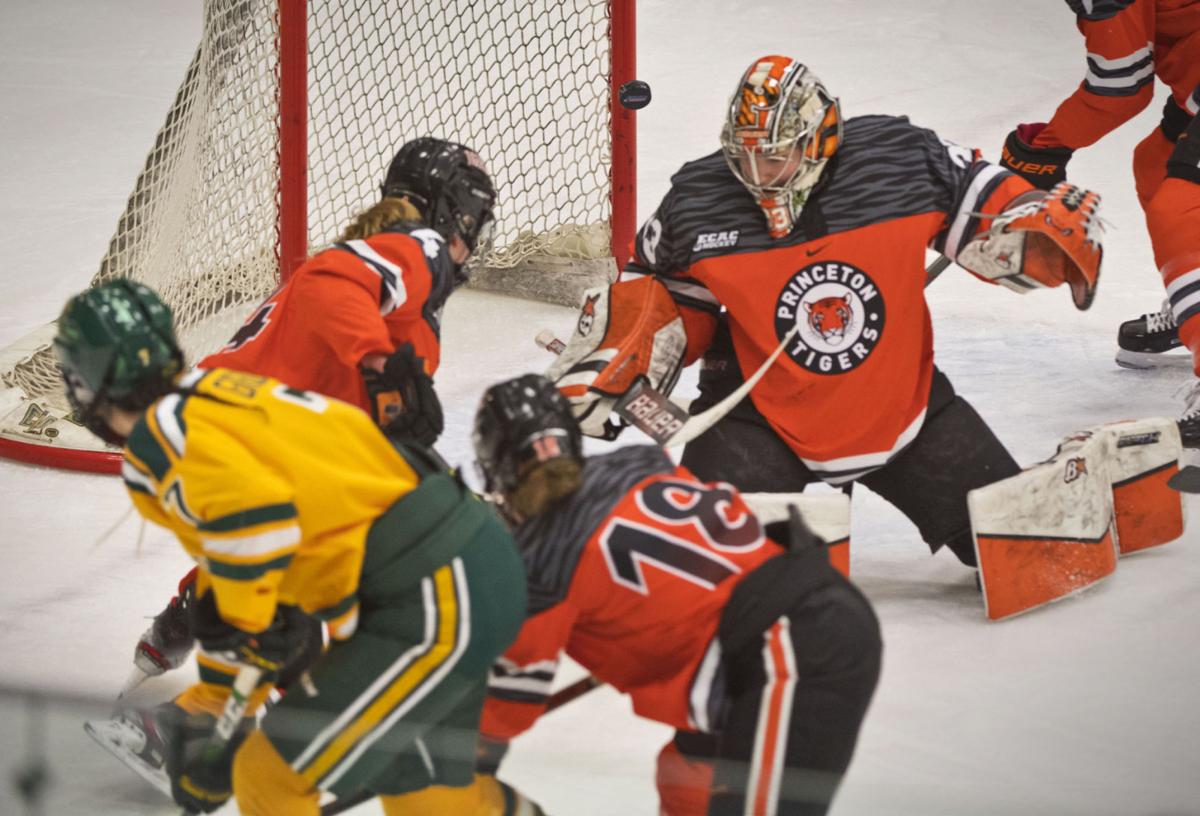 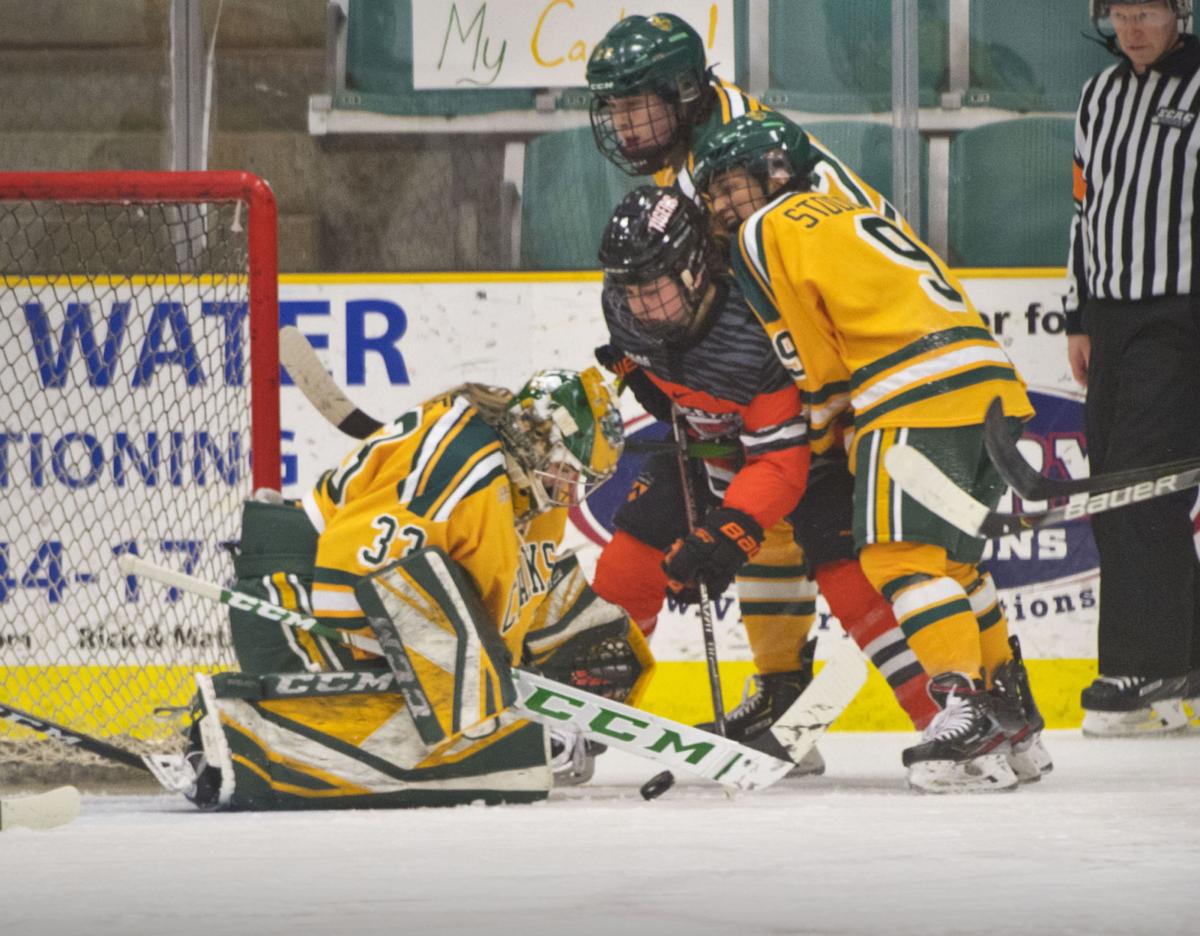 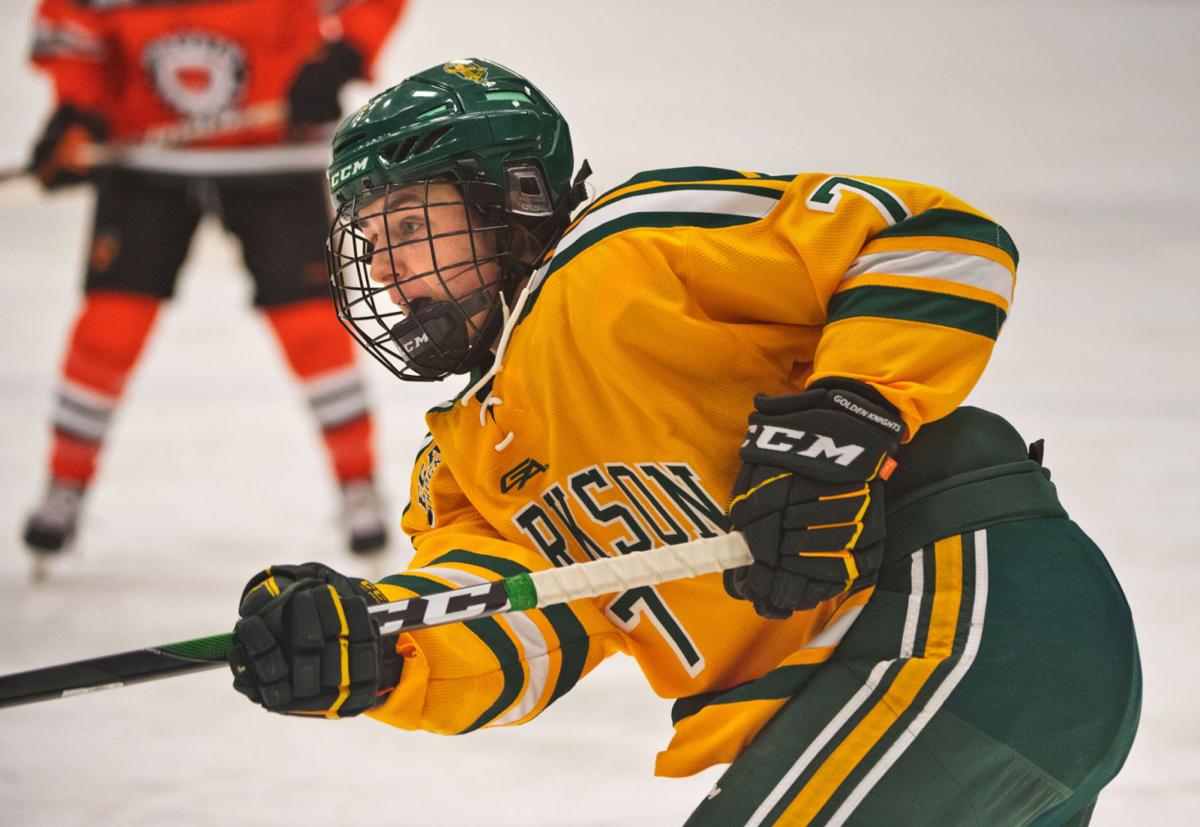 Clarkson’s Elizabeth Giguere watches her shot go in the net for the game’s second goal against Princeton and her 30th goal of the season in the second period. Christopher Lenney/Watertown Daily Times 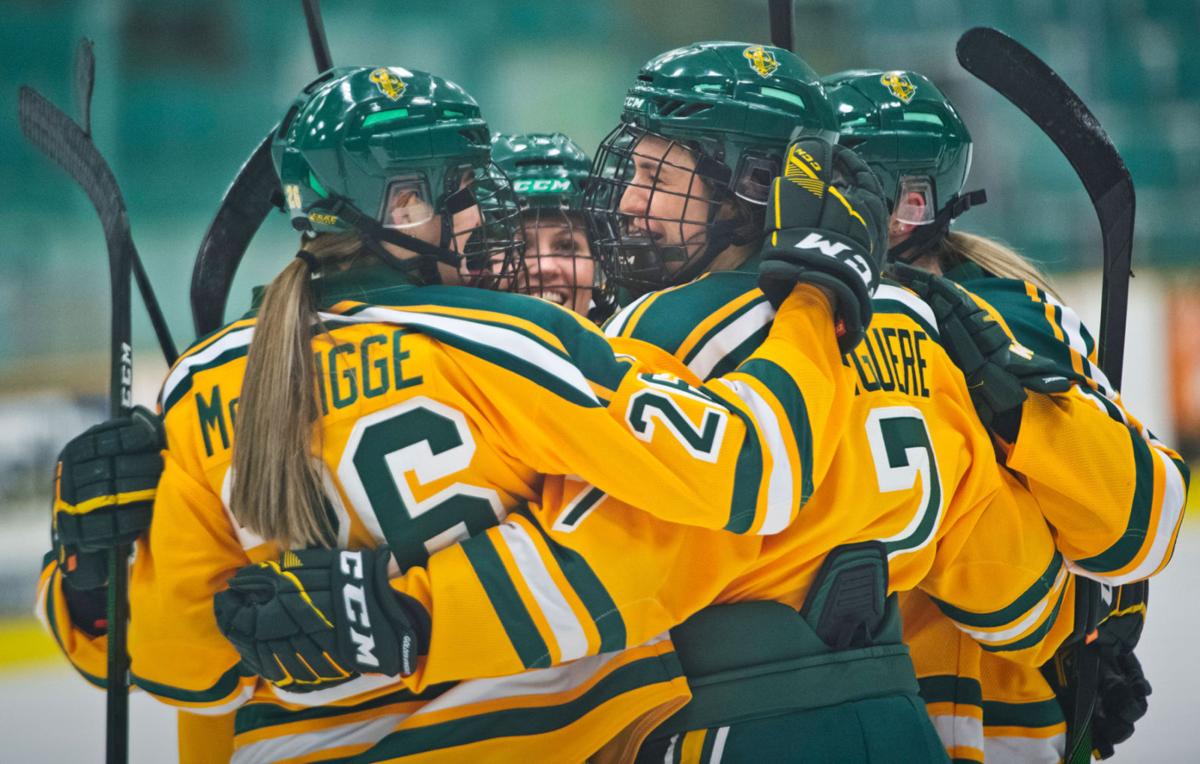 Clarkson’s Elizabeth Giguere is congratulated by her teammates for the game’s second goal against Princeton and her 30th goal of the season in the second period. Christopher Lenney/Watertown Daily Times 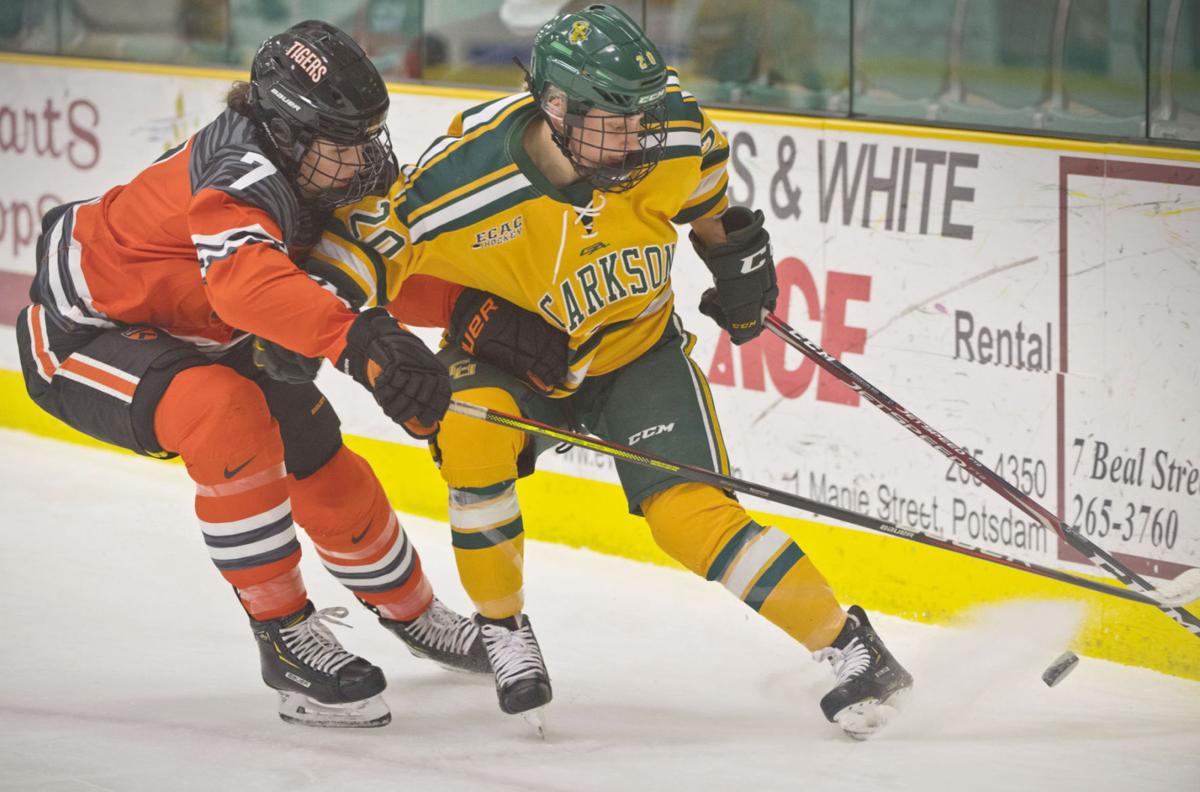 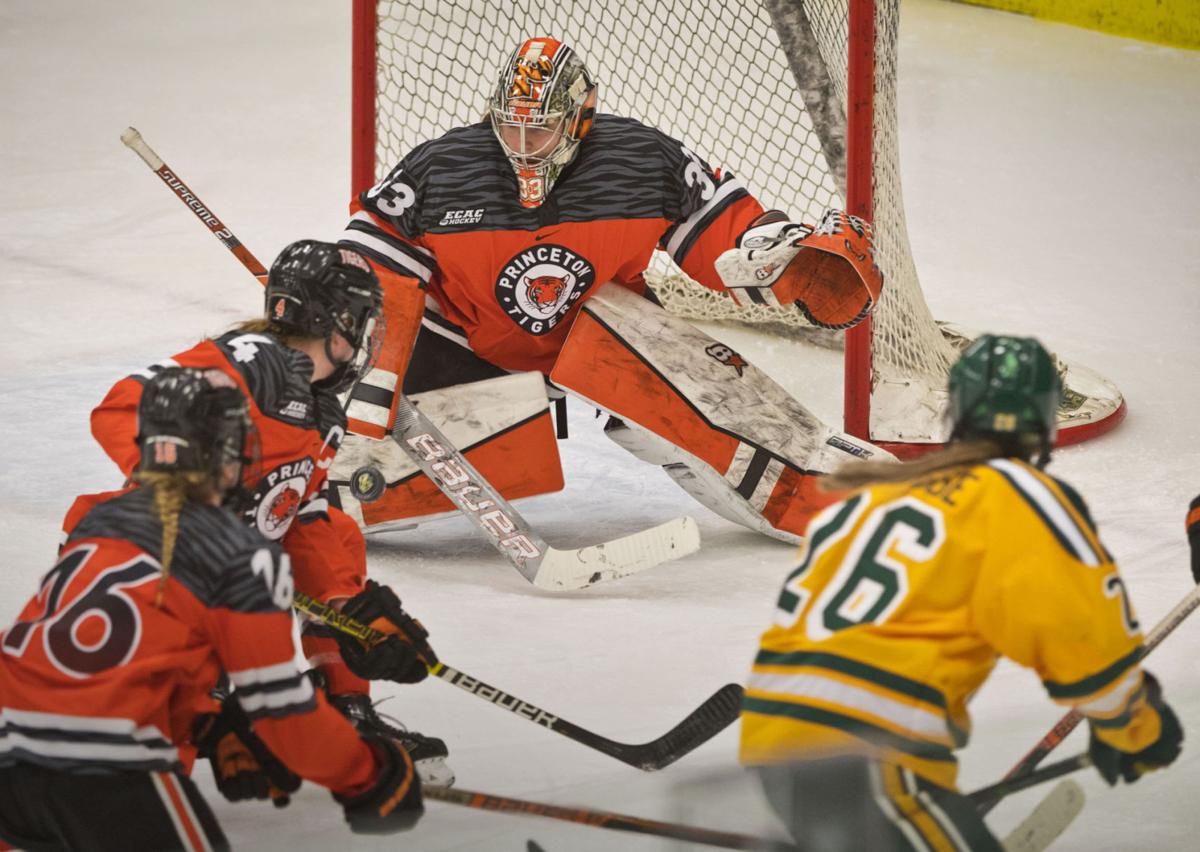 Clarkson’s Elizabeth Giguere watches her shot go in the net for the game’s second goal against Princeton and her 30th goal of the season in the second period. Christopher Lenney/Watertown Daily Times

Clarkson’s Elizabeth Giguere is congratulated by her teammates for the game’s second goal against Princeton and her 30th goal of the season in the second period. Christopher Lenney/Watertown Daily Times

Clarkson, which is ranked No. 6, was missing three forwards with injuries who have combined for 400 career points and dressed only nine forwards.

But the Golden Knights (21-5-6 overall, 12-4-4 conference) did have the services of Elizabeth Giguere, who scored both goals and passed 200 career points in the game.

The junior forward upped her nation-leading goals total to 30 and is now 12 points behind former linemate Loren Gabel for the school’s all-time scoring record of 213 points.

Clarkson has been missing Boston College transfer Caitrin Lonergan (147 career points) since the first game of the season, and graduate student Rhyen McGill (89) has also missed most of the year.

Joining the injured list this weekend was senior Michaela Pejzlova (164), who was on a line with Gabel and Giguere the past two seasons.

“It’s actually pretty impressive what the team’s able to do right now,” Clarkson coach Matt Desrosiers said of the injuries. “We have a lot of important individuals out of the lineup right now, that have done some important things over the course of their careers. It’s also an opportunity for others to step up and showcase what they can do and fill some roles. In the last few games we’ve just done a really good job of playing smart hockey.”

Clarkson was upset 2-1 by Quinnipiac on Friday, which dropped the Golden Knights to No. 9 in the Pairwise Rankings, which are used to select the eight-team NCAA Tournament field.

Saturday’s game was much different as Clarkson held Princeton to 28 shots and only six in the first period.

“We started slow and we started tentative, it’s now how we play hockey,” Princeton coach Cara Morey said. “We talked through what kind of team we are and how we play hockey, and in the second and third, I thought we did a great job showcasing our game.”

Princeton’s Sarah Fillier was called for high sticking at 14 minutes, 52 seconds of the opening period that set up the game’s first goal. It was a power-play tally by Giguere, who skated by the front of the net to give Clarkson a 1-0 lead 18 seconds into the power play.

Giguere had the puck on a two-on-one breakaway at 9:19 of the second period, with Clarkson freshman Brooke McQuigge joining her on the other side of the ice.

A Princeton defender dove in front of Giguere to take away the pass, so Giguere put in a quick wrist shot to give Clarkson a 2-0 lead.

Princeton’s goalie was Rachel McQuigge, Brooke’s older sister, which caused their father Trevor to wear a shirt that was half Clarkson, half Princeton.

Rachel joked after the game that her father joined with the Clarkson student section and called her a “sieve” after she gave up a goal.

“It’s always a fun, competitive environment when I play against my sister,” Brooke McQuigge said. “It’s good for our friends and family.”

Princeton got back in the game at 11:07 of the second with a goal from Annie Kuehl and the Tigers thought they had tied the game about 3:30 into the third when Fillier took a hard wrist shot that hit the post.

Morey thought the puck went into the net but wound up not asking for a review of the play as part of a coach’s challenge.

“I wanted to get it looked at, the ref said it absolutely went straight down and stayed in the blue paint and he was too confident for me to waste our timeout (on a challenge),” Morey said.

Charlea Pedersen scored a shorthanded goal for the Saints in the first period and Quinnipiac (18-11-3, 10-8-2) answered with goals from Taylor House and Kenzie Prater eight seconds apart in the third period to take a 2-1 lead.

Skyler Podvey tied the game for SLU at 10:30 of the third period.