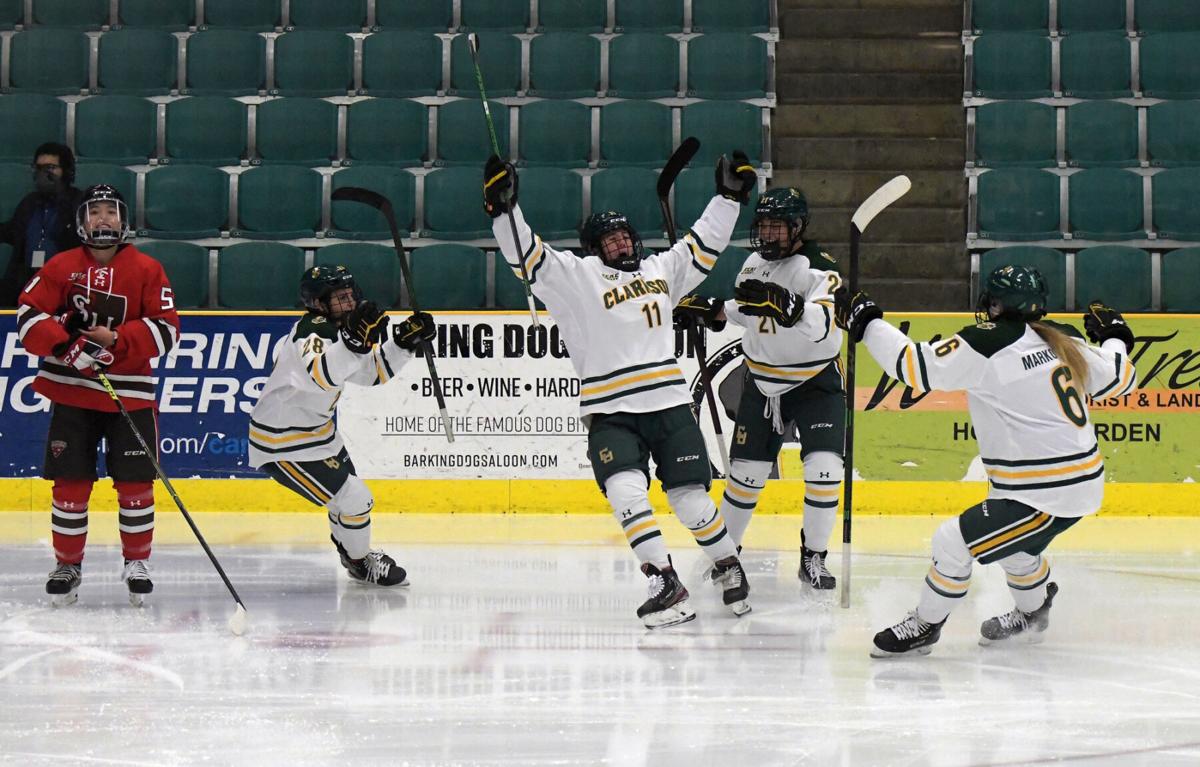 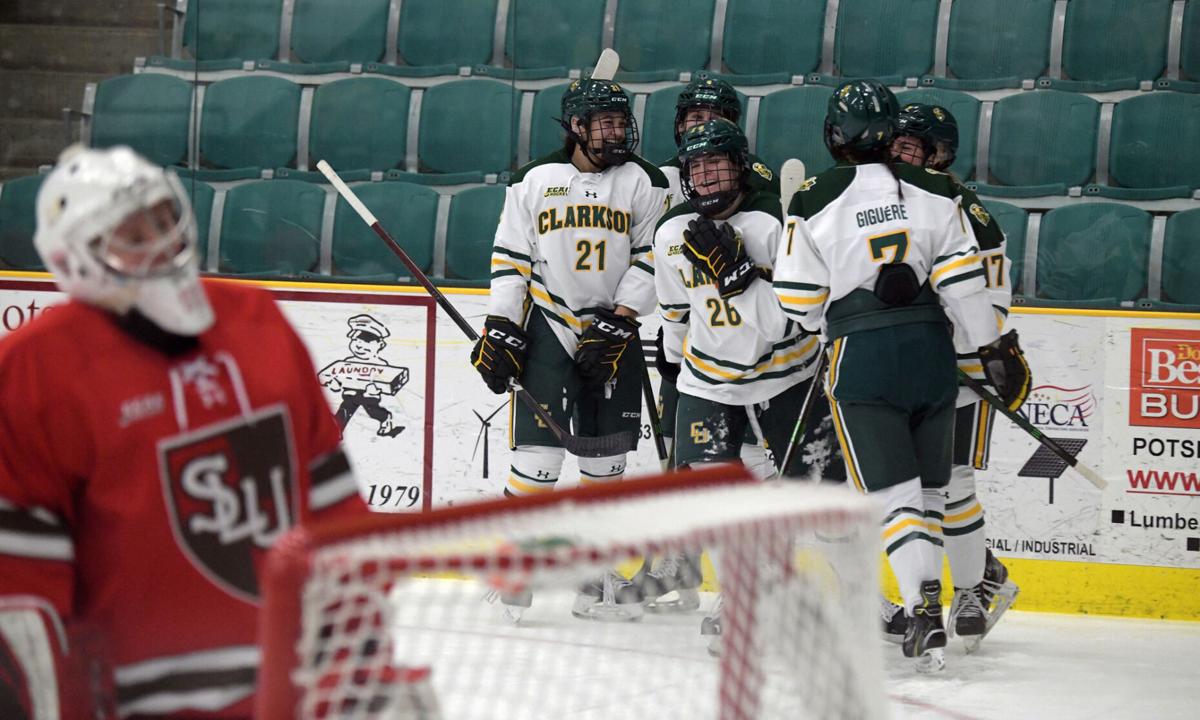 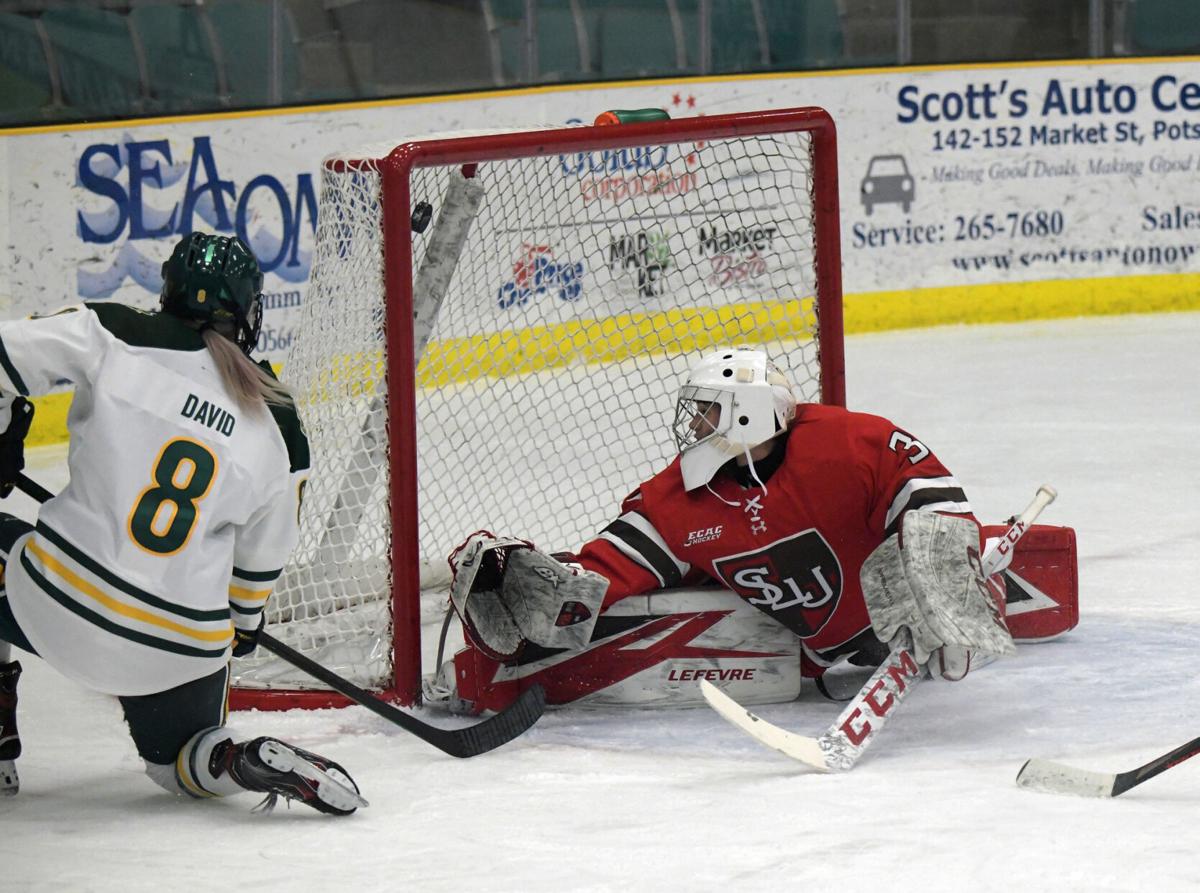 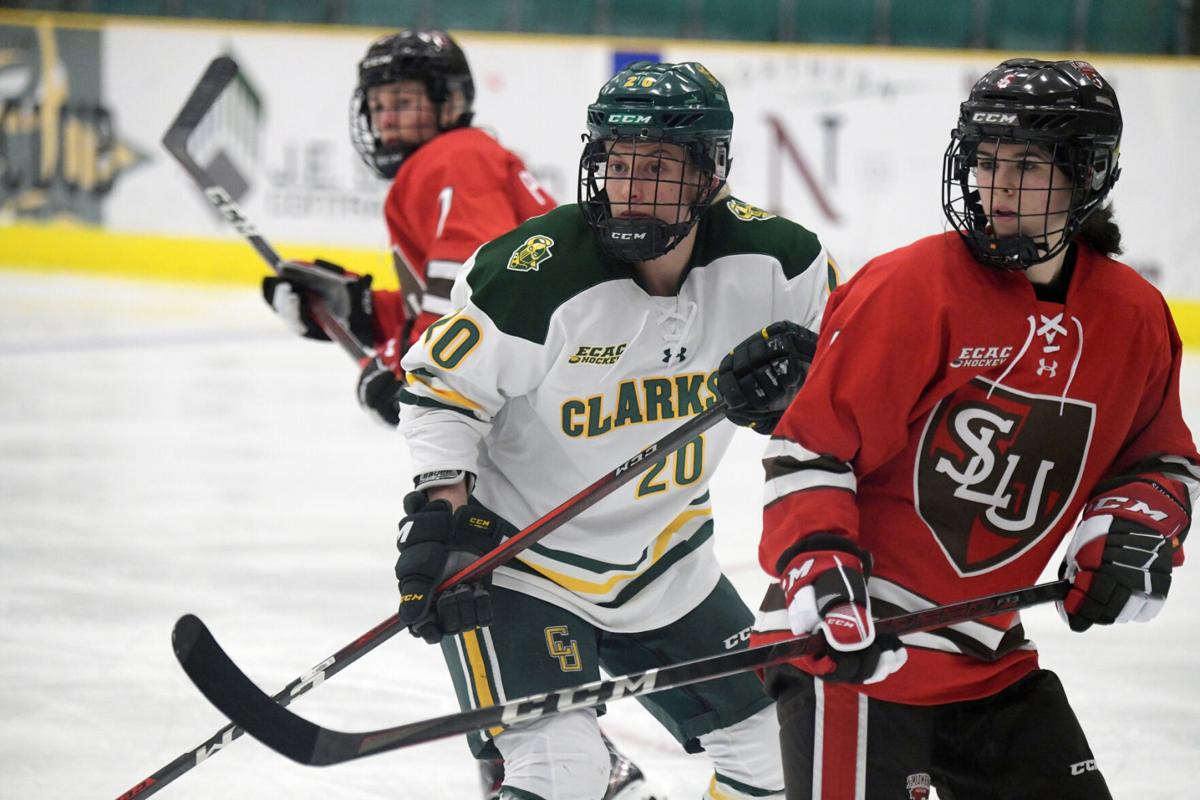 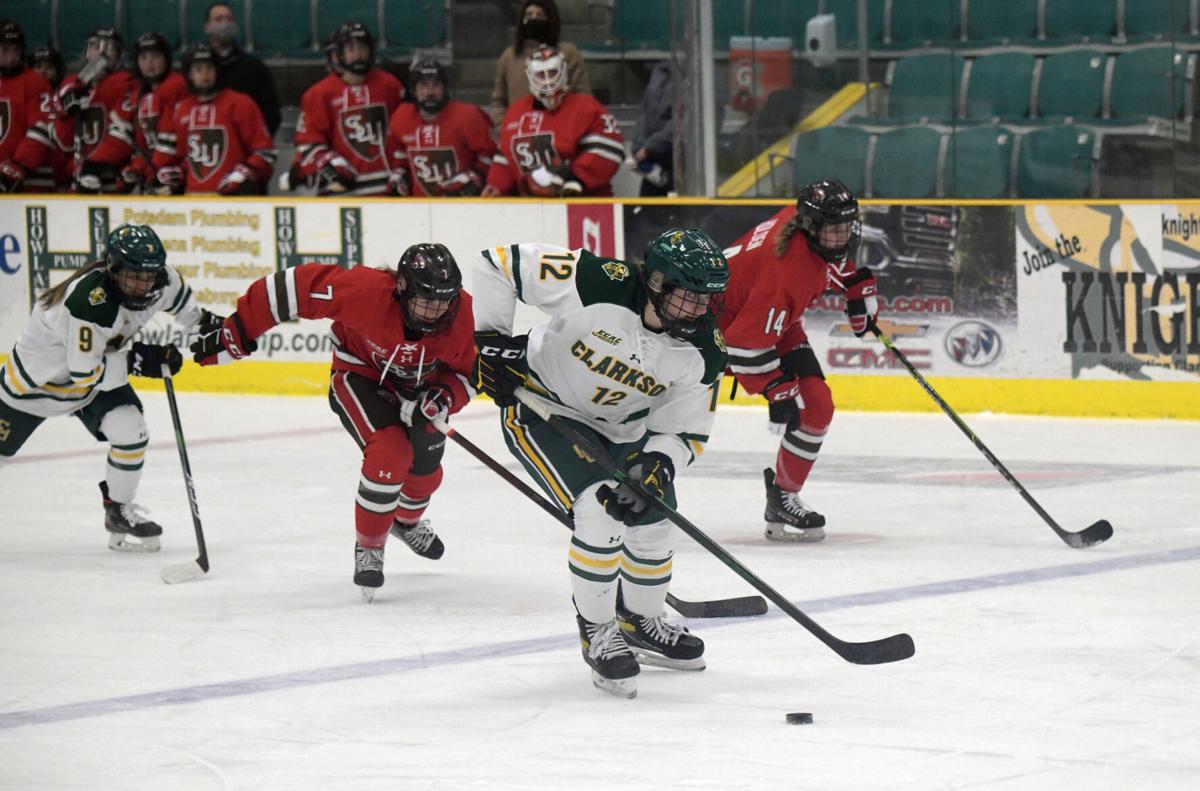 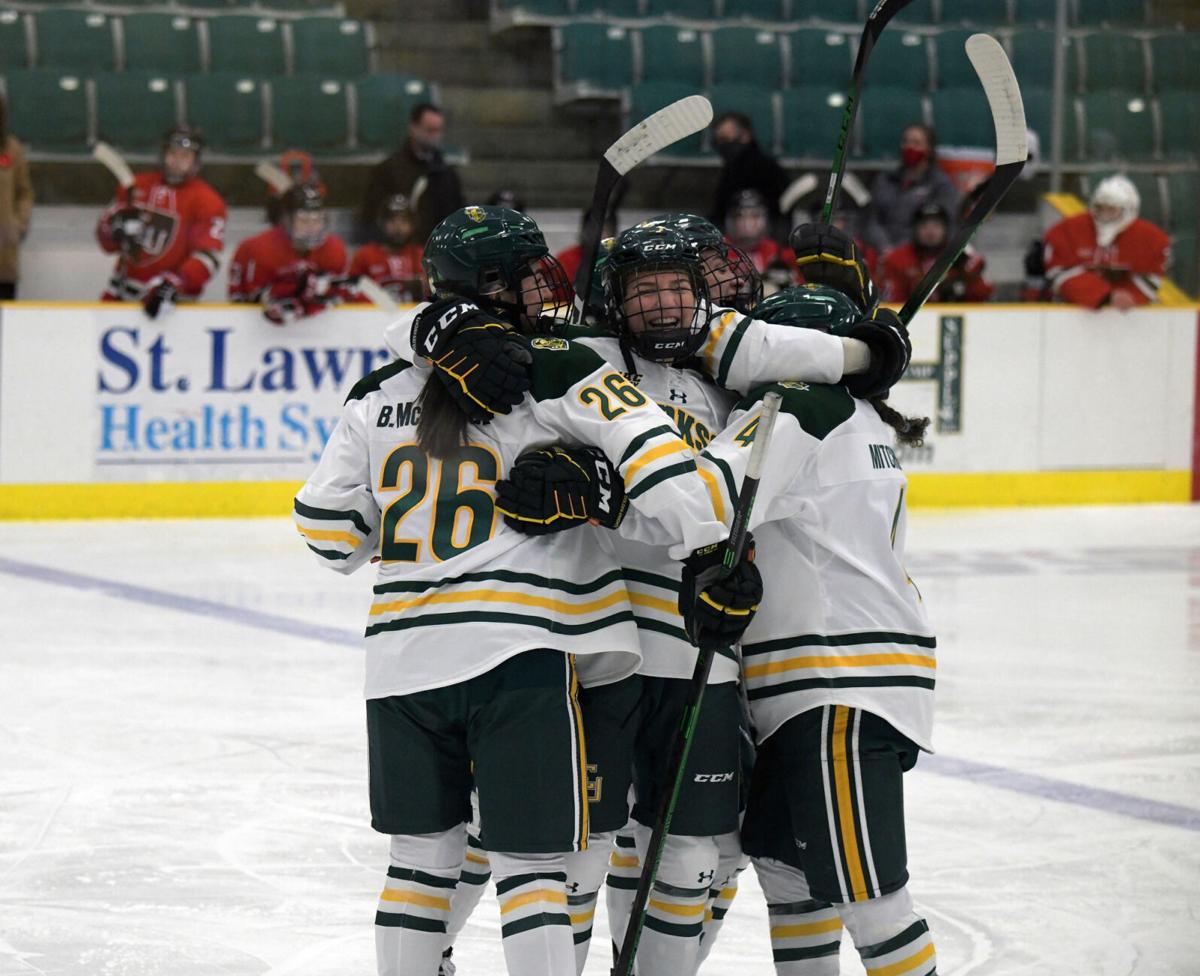 POTSDAM — Caitrin Lonergan, a newcomer to the Clarkson rivalry with St. Lawrence University but not the Saints, scored 13 seconds into a nonconference women’s hockey game Wednesday at Cheel Arena and started the Golden Knights on their way to an 8-1 victory.

Lonergan, a transfer from Boston College, had scored two goals against SLU as a member of the Eagles in past seasons. She finished with two goals and an assist Wednesday.

“Today was my first game for Clarkson not playing Colgate, so it was kind of nice to change up the scenery a little bit,” Lonergan said. “I played St. Lawrence in the past at BC, so I’ve kind of known how they play. I was excited to be part of the rivalry that I know Clarkson and St. Lawrence have.”

Clarkson (4-4-1 overall) had scored just one goal in each of its last two games with Colgate, so Lonergan’s quick goal provided a burst of excitement.

“I think something our line is trying to do well is we are trying to be an energy line all the time,” Lonergan said. “That was kind of our focus. We scored on the second shift last game and the first shift this game, so that’s kind of what we want to do. We want to get on teams quick.”

The Golden Knights wound up scoring four goals in the first period, spoiling the opening game of the season for SLU, which was the last men’s or women’s team, of those Division I teams playing this year, to play a game.

“This was way better than being able to practice for five more days,” Saints coach Chris Wells said. “We just needed to get in and play a game. It’s been 320 days since we played a game. To be able to get out there, it’s not often you leave an 8-1 game you didn’t win and feel good about a lot of the things that happened. We have nine new kids. We are happy with the effort and the energy level. We can’t thank enough all the people who have made it possible to be able to play at Clarkson and at St. Lawrence.”

SLU did respond to the early goal, tying the game with a power-play goal from Kristen Guerriero just 34 seconds later.

But Clarkson started to put the game out of reach by scoring two goals 3 minutes, 19 seconds apart to build a 3-1 advantage.

Avery Mitchell scored at 3:11 and Gabrielle David scored a power-play goal off a nice pass from Elizabeth Giguere at 6:30.

“It’s a play we always do in practice,” David said. “I was timing myself. I just had to put the puck in the net. It was a great play from Elizabeth. It felt good (scoring goals) because we lost four times against Colgate. It felt really good to have a win.”

Giguere made it 4-1 with her seventh goal of the season at 15:24 of the opening period. She went on to add two more assists in the game and now has 12 goals and 12 assists in 12 career games against the Saints.

Giguere is tied for the national lead in goals and tied for second nationally with 14 points.

“It’s a pretty good confidence booster for us,” Clarkson coach Matt Desrosiers said. “I think we were pretty amped up to play them and play someone different than Colgate as well. I thought we had pretty good energy throughout the entire night and through all the lines.”

Brooke McQuigge extended the lead to 5-1 with a goal at 8:43 of the second period, which was assisted by her sister Kirstyn and Giguere.

Freshman Emily Oosterveld scored her first career goal at 13:34 to make it 6-1 with Brown transfer Sena Hanson picking up her first point with Clarkson on the assist.

Lonergan scored her second goal at 19:35 of the second period on a power-play to extend the lead to 7-1.

Defenseman Stephanie Markowski ended the scoring with another power-play goal for Clarkson at 5:23 of the third period.

n The Saints added a second nonconference game Wednesday. SLU will host the Rochester Institute of Technology at 4 p.m. Tuesday in Appleton Arena.