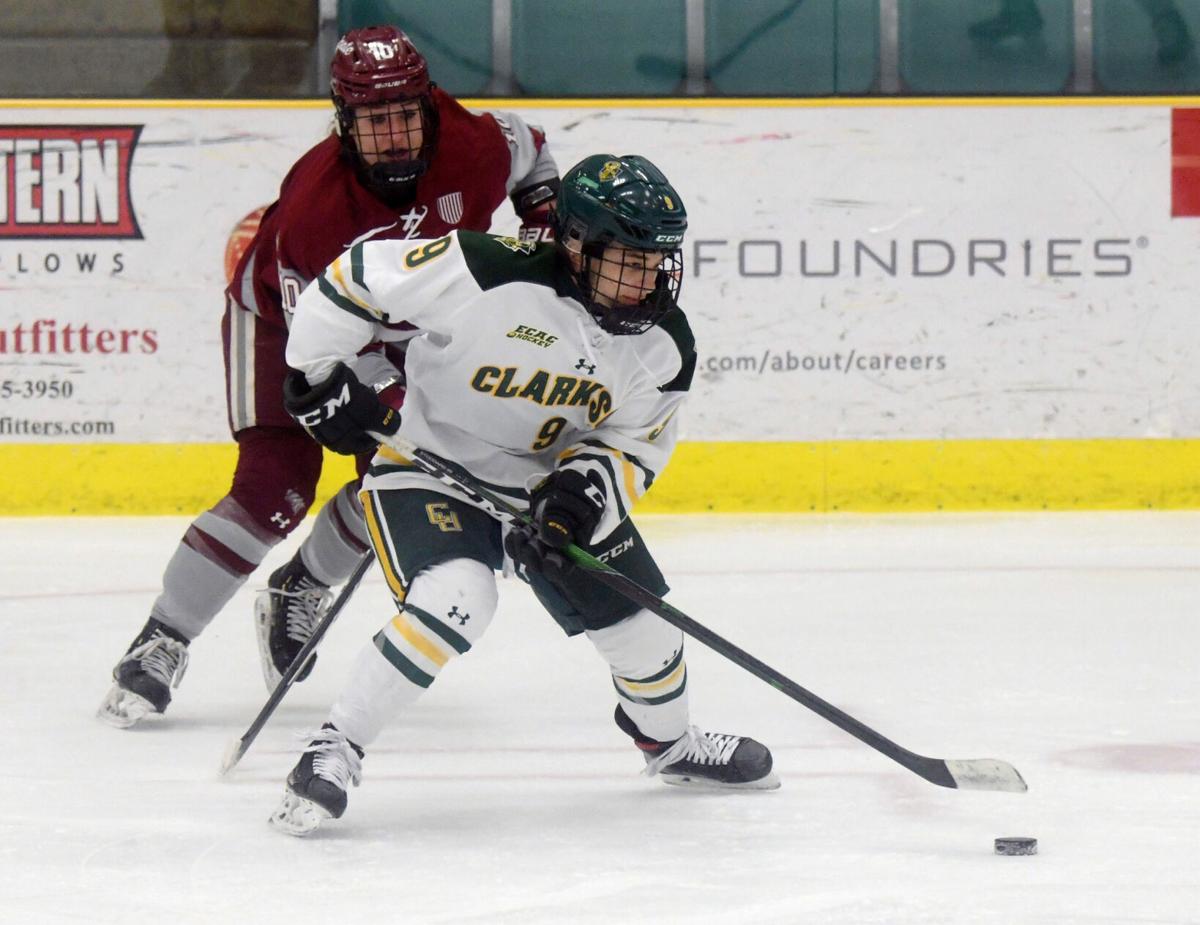 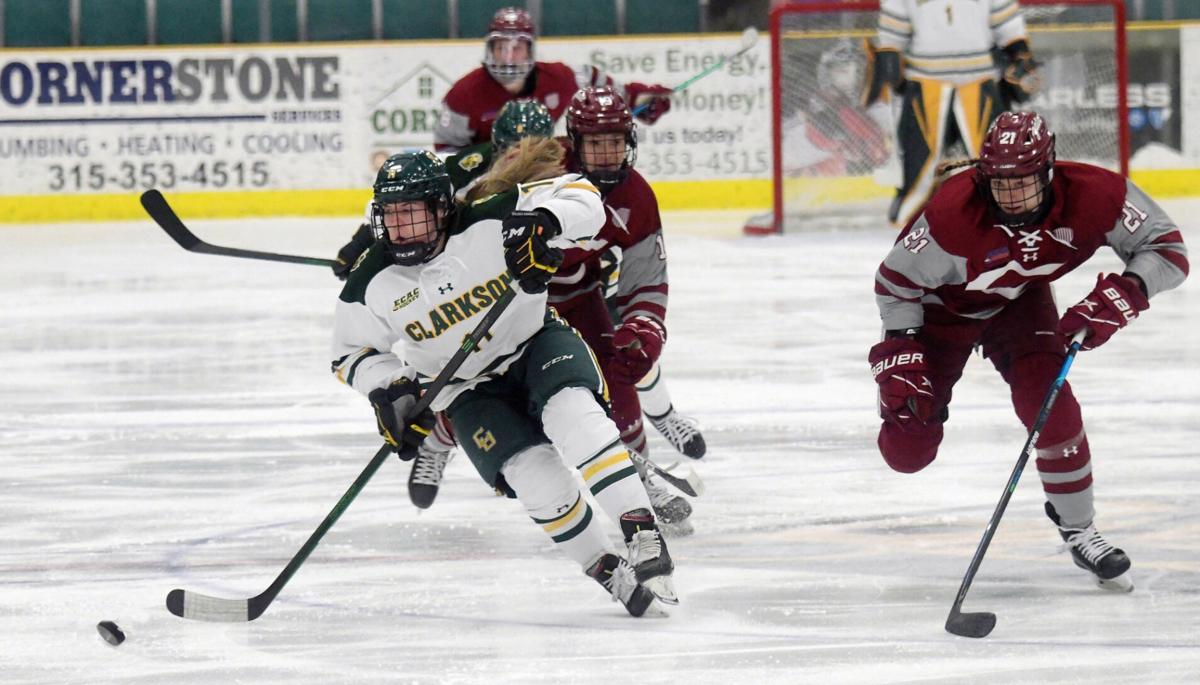 Clarkson’s Caitrin Lonergan brings the puck up the ice while being pursued by Colgate’s Noemi Neubauerova and Maggie MacEachern, back. Clarkson University photo 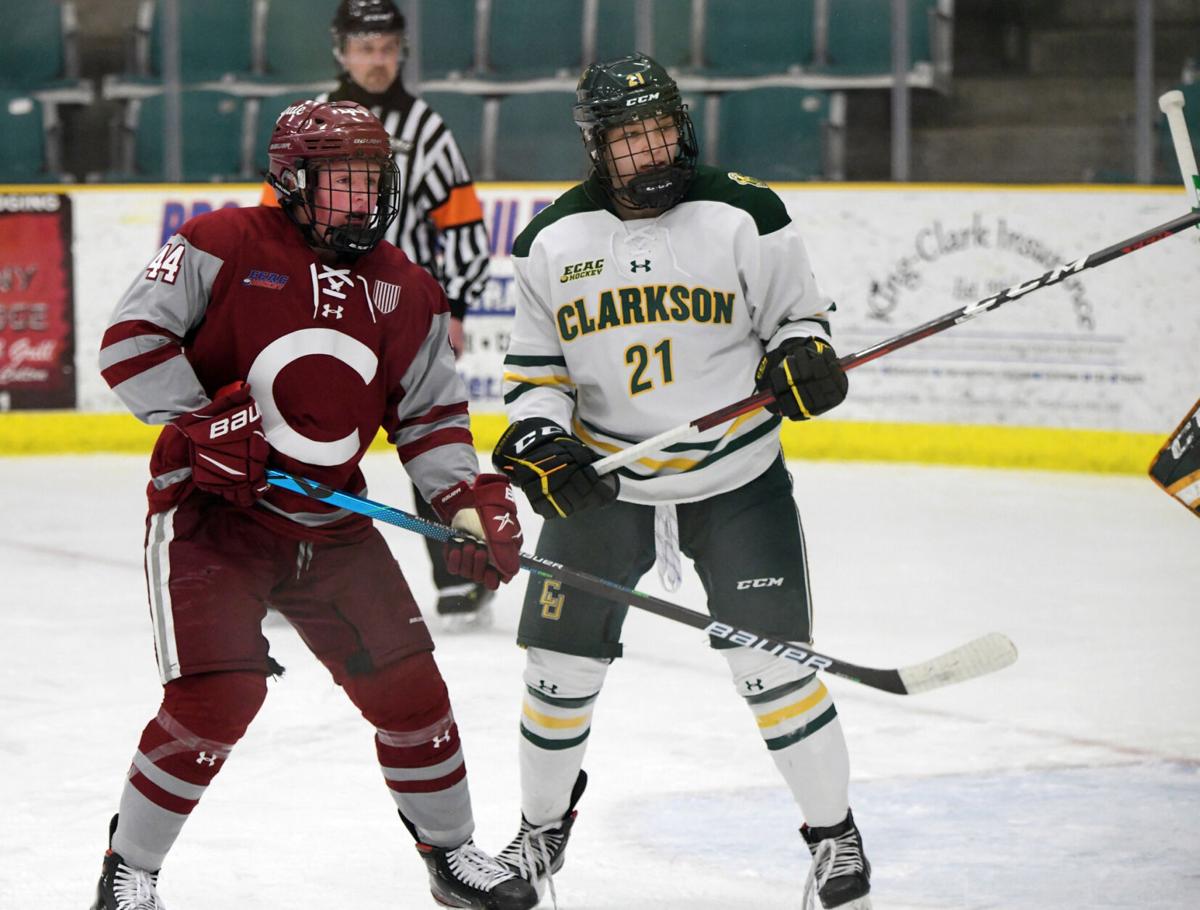 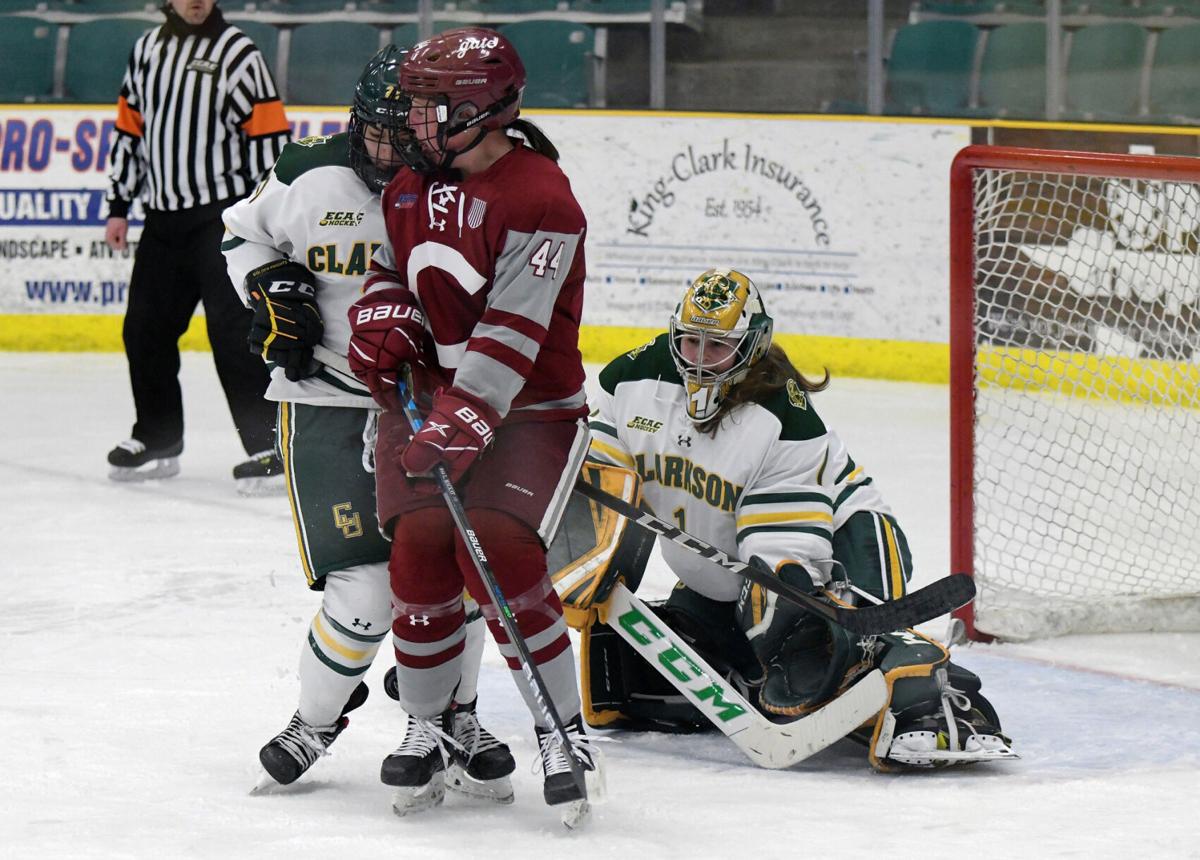 Clarkson’s Caitrin Lonergan brings the puck up the ice while being pursued by Colgate’s Noemi Neubauerova and Maggie MacEachern, back. Clarkson University photo

POTSDAM — A dynamic performance from Caitrin Lonergan helped lead the Clarkson University women’s hockey team to a 2-0 win over Colgate in an ECAC Hockey game Friday night at Cheel Arena.

Lonergan, a transfer from Boston College, scored both goals for the Golden Knights (6-5-1 overall, 2-3-0 conference).

On the other end of the ice, freshman goalie Michelle Pasiechnyk stopped 32 shots to earn her first career shutout and continue a stretch that has seen her stop 109 of her last 112 shots.

Friday’s game was the first of four straight between Clarkson and Colgate (10-2-1, 6-1-0), who had already faced each other six times earlier this season.

The teams will play their final ECAC Hockey game against each other at 4 p.m. Sunday in Hamilton and then have two nonconference games scheduled on Feb. 5 in Hamilton and Feb. 7 in Potsdam.

“We needed that,” Clarkson coach Matt Desrosiers said. “We’ve played them six times and they’ve probably had the better of it. It was good for us to kind of get out there and kind of redeem ourselves a little bit against Colgate.”

Colgate had the upper hand in the series before Friday’s game, going 4-1-1 against the Golden Knights, including sweeping two ECAC Hockey games on Jan. 16 and 18.

“I’d rather be playing a team like (Colgate) all year long,” Lonergan said. “You are definitely going to become a better hockey player and our team is becoming a better team. These games are great. They are close and these are some of the fastest games I’ve played in college. I really like it.”

Lonergan scored the game’s first goal for the third time in the last five games Friday, putting the Golden Knights up 1-0 at 4 minutes, 25 seconds of the first period with assists going to Avery Mitchell and Brooke McQuigge.

“Our line (which included Gabrielle David and Florence Lessard), we’re trying to get on teams quick and be the energy line,” Lonergan said. “We know if we can try and get our team the first goal we have a better chance of the rest of the team kind of stepping up and keep going. The first one has been helping our team a lot.”

Lonergan’s speed and enthusiasm for the game has been a positive for the Golden Knights. At one point she skated past Colgate defenders like they were just tires on the ice for a skating drill.

“Something (Desrosiers) has helped me with is kind of being deceptive with (speed),” Lonergan said. “Learning when to be quick and learning when to kind of slow down. We’ve been working on it for the past two or three months and it’s really made a difference. He has taught me things I wished I learned four years ago.”

She gave Clarkson the team’s first two-goal lead against Colgate this season when she scored at 10:25 of the third period with Gabrielle David and Stephanie Markowski assisting.

Lonergan seems to be the only NCAA Division I women’s player who can score regularly on Raiders goalie Kayle Osborne.

Osborne has given up 18 goals this year, six of which have come from Lonergan. Lonergan is scoring on 21 percent of her shots against Osborne. The rest of the players she’s face have scored on five percent of their shots.

“We’re just happy that someone is scoring against them,” Desrosiers said of Lonergan’s goals. She’s got a ton of speed. I haven’t seen too many players be able to skate with her. Her first two strides are pretty explosive.”

Pasiechnyk improved her record to 4-2 with Friday’s win. She has a 1.44 goals-against average and her save percentage of .953 ranks sixth nationally.

“As a new goalie, having a strong team in front of me is just really helping me, to be calm in the net and make saves when I have too,” Pasiechnyk said. “I don’t really get nervous, but I love those big games when you have to make big saves. It’s more exciting.”

The St. Lawrence University women’s hockey team has postponed its next three games, beginning with a pair of ECAC Hockey games that were to take place at Quinnipiac this weekend.

The next games on the schedule would be a pair of home games with Quinnipiac on Feb. 6-7.