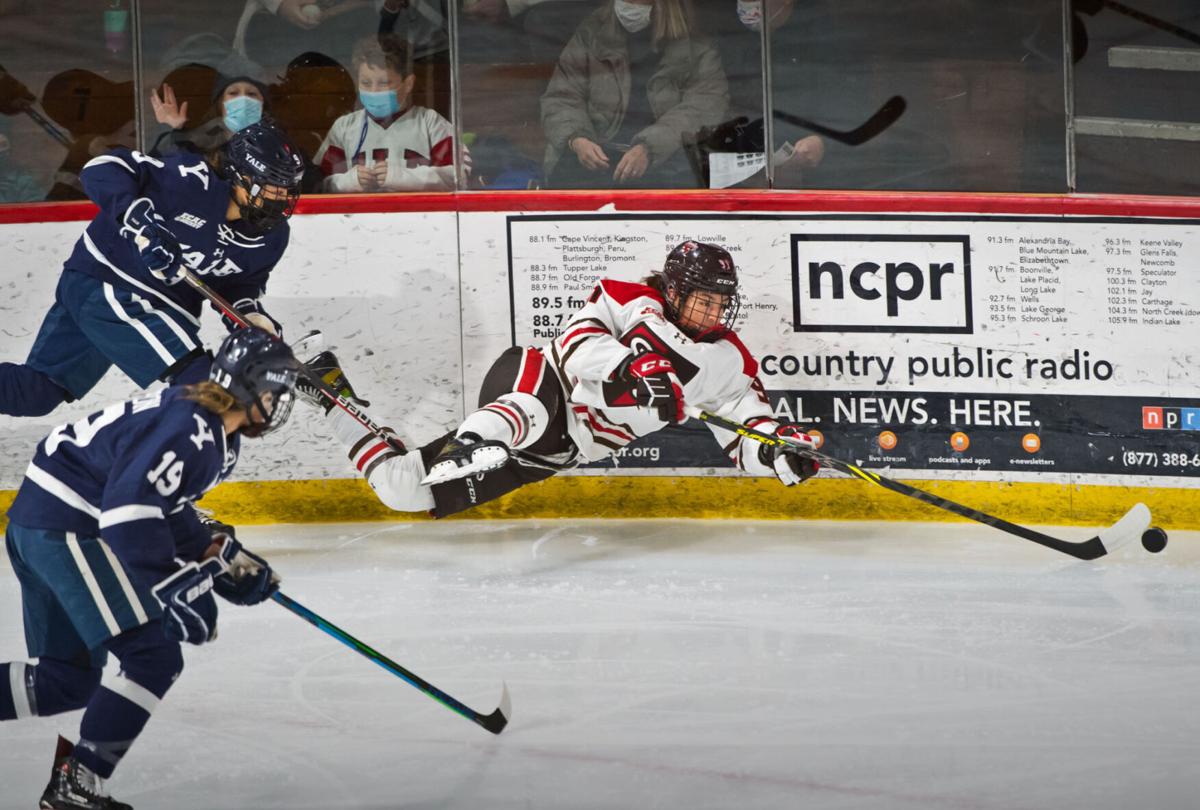 St. Lawrence’s Kristina Bahl tries make a pass despite getting caught up in the stick of Yale’s Kiersten Goode during the first period. Christopher Lenney/Watertown Daily Times 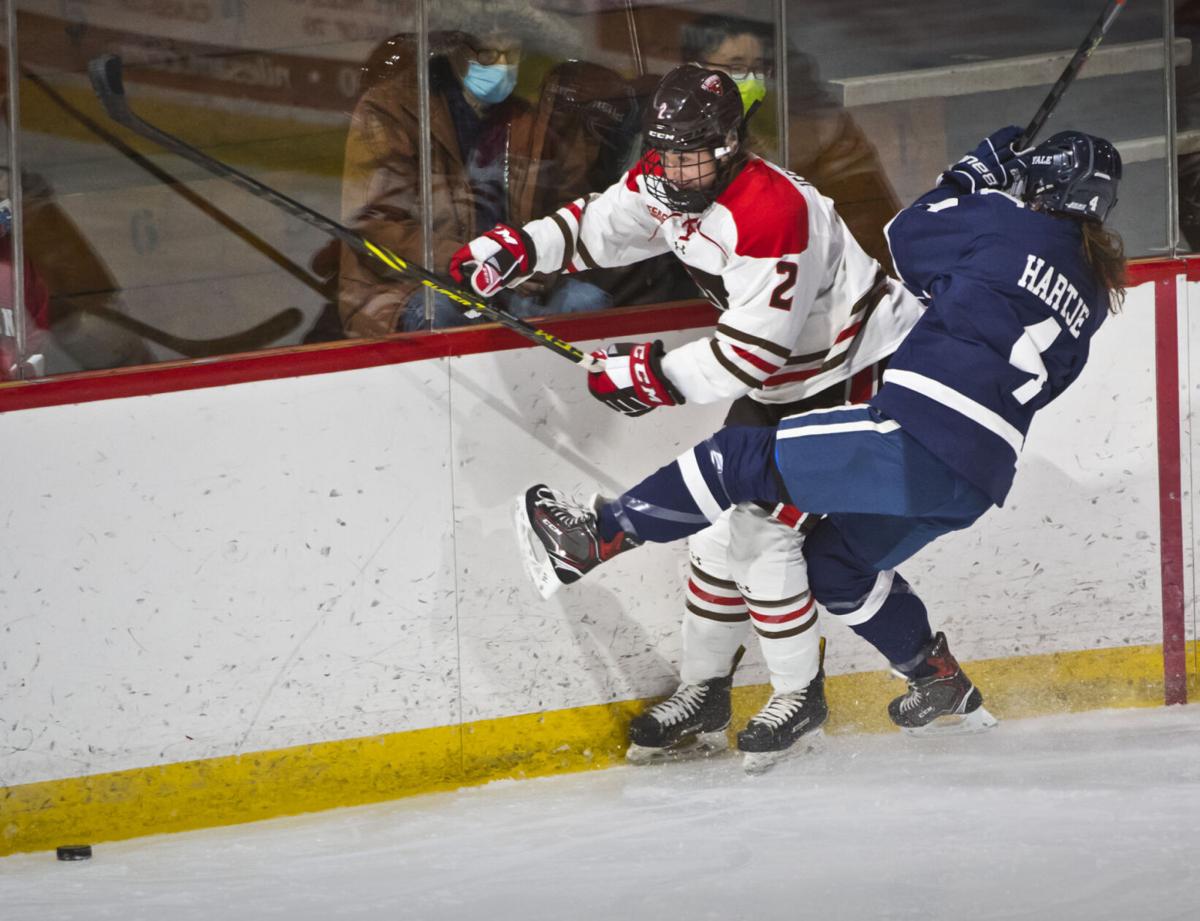 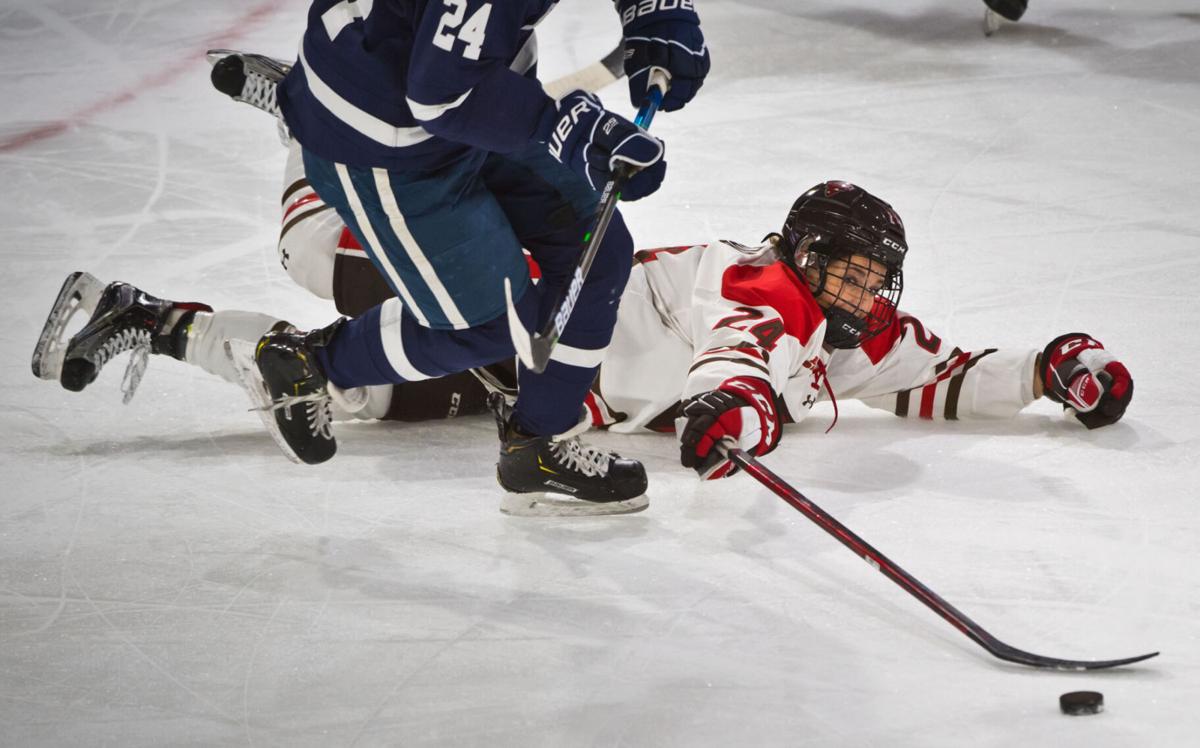 Despite falling down St. Lawrence’s Aly McLeod tries to keep the puck away from Yale’s Claire Dalton during the first period. Christopher Lenney/Watertown Daily Times 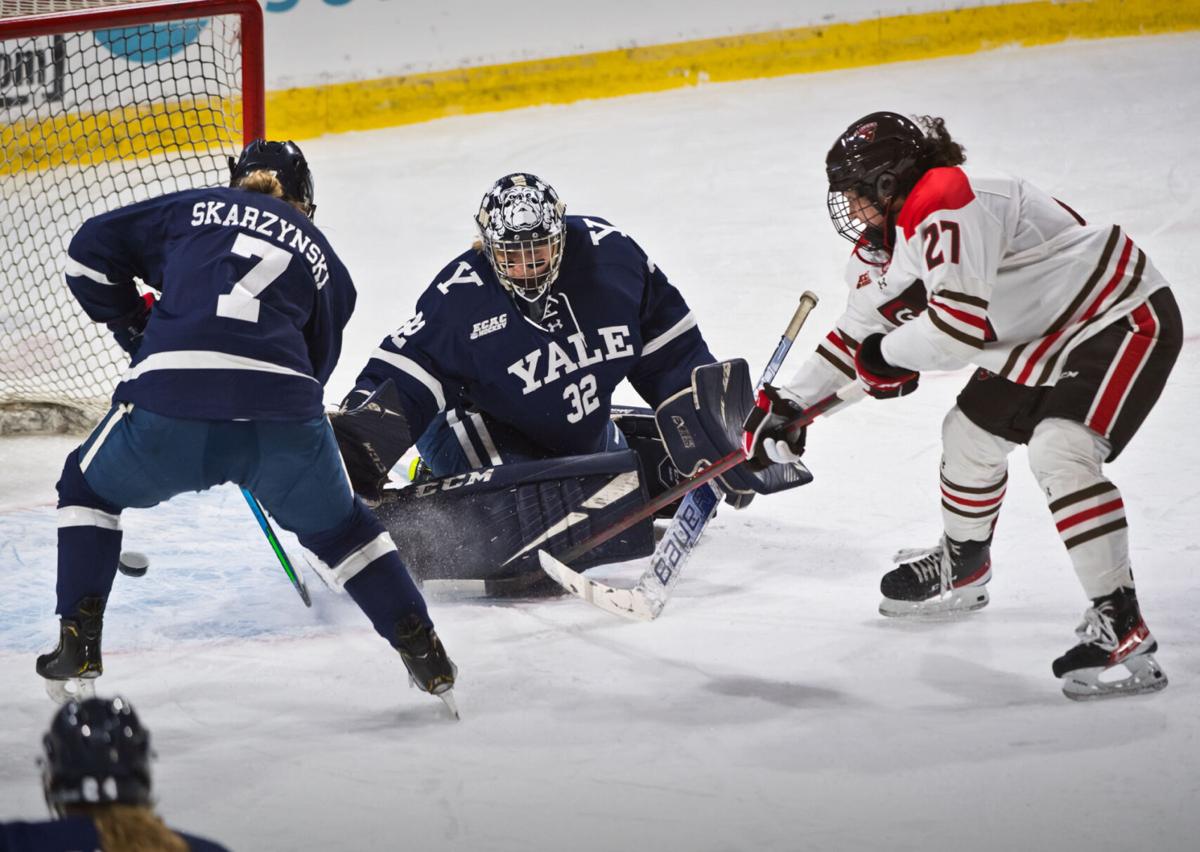 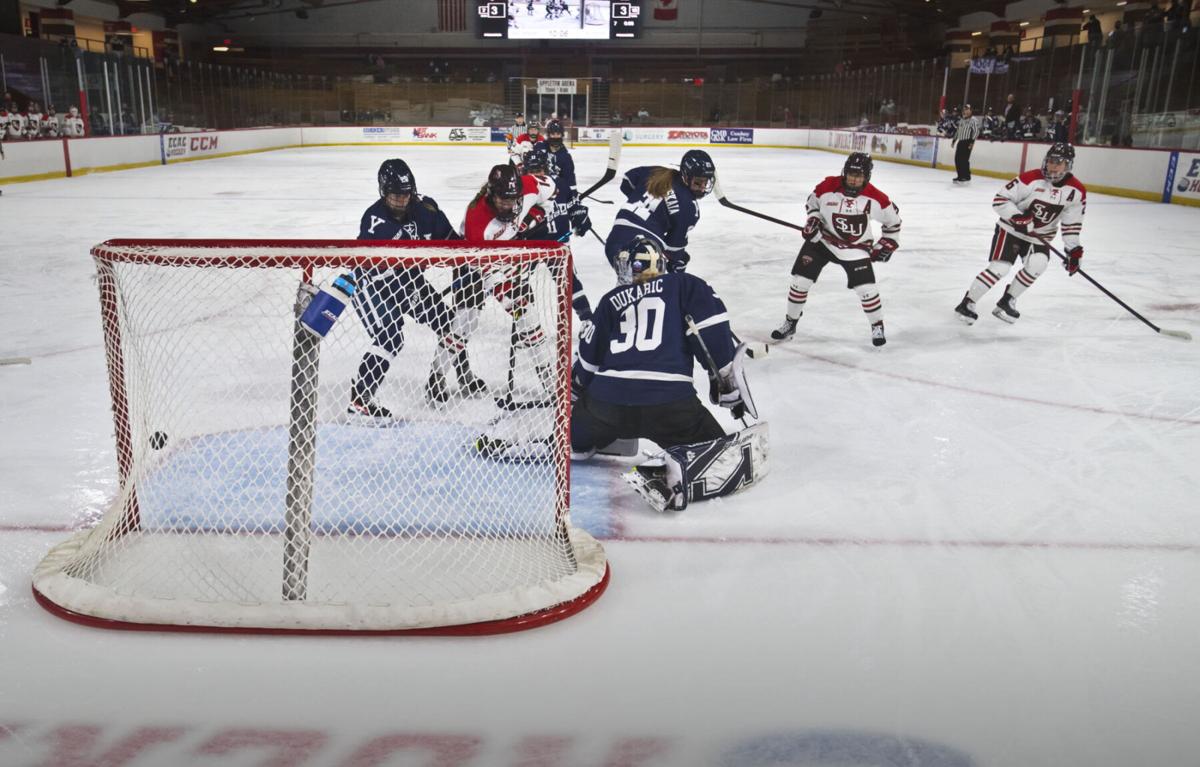 St. Lawrence’s Kristen Guerriero’s shot hits the back of the net for a second-period goal against Yale. Christopher Lenney/Watertown Daily Times 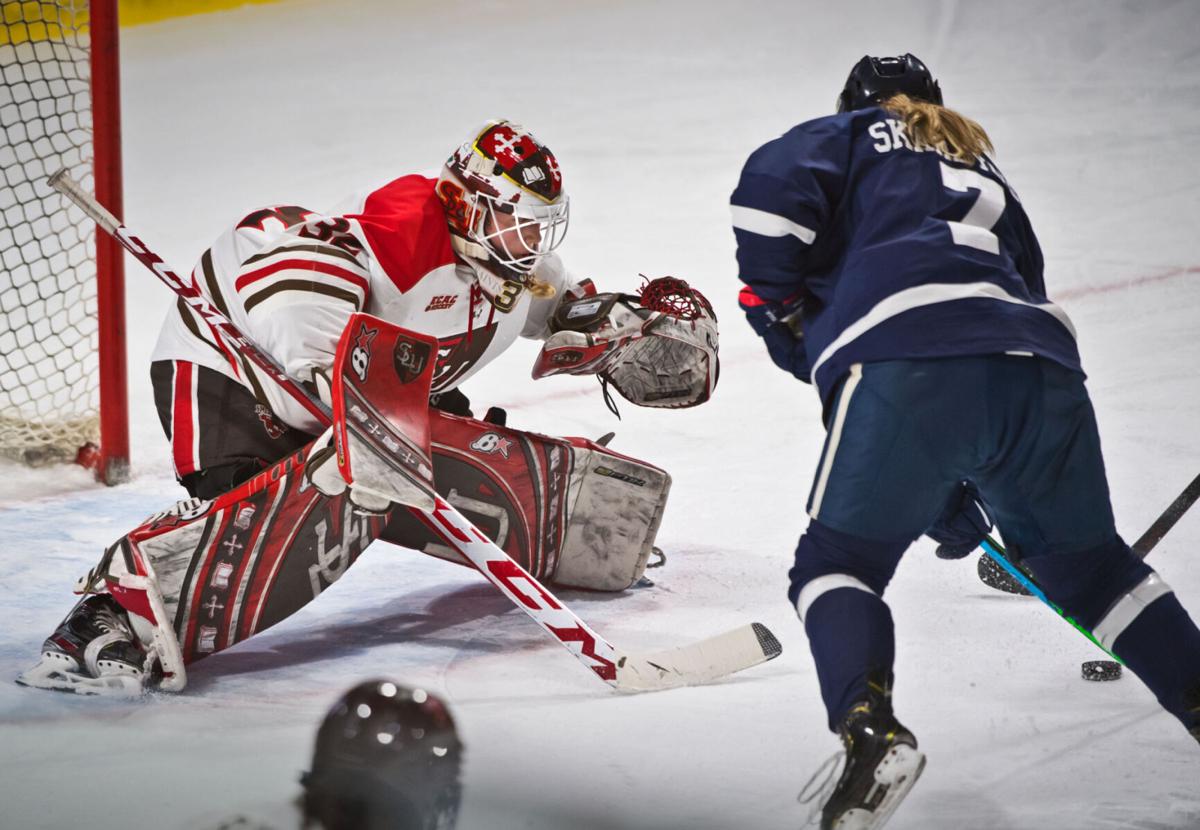 St. Lawrence’s Kristina Bahl tries make a pass despite getting caught up in the stick of Yale’s Kiersten Goode during the first period. Christopher Lenney/Watertown Daily Times

Despite falling down St. Lawrence’s Aly McLeod tries to keep the puck away from Yale’s Claire Dalton during the first period. Christopher Lenney/Watertown Daily Times

St. Lawrence’s Kristen Guerriero’s shot hits the back of the net for a second-period goal against Yale. Christopher Lenney/Watertown Daily Times

CANTON — The fans at St. Lawrence University women’s hockey game against ninth-ranked Yale Friday night got a sense of what type of contest they would be in for 23 seconds into the game when Saints freshman Abby Hustler scored against Yale goalie Gianna Meloni, who entered the game with a .981 save percentage.

After a wild first period, which saw five goals, things settled down and both teams settled for a 4-4 tie in an ECAC Hockey game in Appleton Arena. Under the new women’s rules both teams earned 1.5 points for the tie. There are no shootouts in women’s hockey.

“We finally got the puck in the net,” Saints coach Chris Wells said. “For the last six weeks we’ve had some real good efforts, real good chances, and pucks haven’t gone in. Tonight we found a way to go in. You have to take them when you can get them, because goals are so hard to come by. We really liked the effort out of our kids. Yale’s very talented, they make some great plays and play well together and make you work for every inch of it.”

Yale (6-2-1 overall, 4-2-1 conference) entered Friday’s game on a four-game winning streak, having allowed just four goals in those contests combined. By the end of the opening period, they trailed the Saints 3-2.

The Bulldogs answered the opening goal with a goal from Anna Bargman at 8 minutes, 31 seconds of the first period and took a 2-1 lead when Claire Dalton scored a shorthanded goal at 15:33.

“I definitely don’t think we came out like we wanted too, we didn’t come out strong,” Yale captain Greta Skarzynski said. “I was really proud of us for sticking to our game plan and we came back and fought really hard to come back. We went down a couple times. No matter what, we came back and brought the energy back and tried to get the momentum.”

“I think the (Yale player) just turned it over,” McLeod said. “She tried to make a pass up ice and fanned on it. That was just one of those bounces that had to go our way, eventually, so we were happy with that. I kind of panicked right away. At first I didn’t think it went in, but then I saw the (net) move and I was happy with it. That (period) was a big confidence boost for us. We realized getting shots on net can result in anything.”

After the period ended, Yale coach Mark Bolding pulled Meloni and replaced her with Pia Dukaric, who went on to stop 9-of-10 shots.

“I just got pucks on net to begin the game, what our game plan was,” Hustler said of her early score. “(Knocking Meloni out of the game) was really surprising. We’ve been practicing all week just getting pucks on the net and driving to the net. It seemed to work out the first couple shifts, so that was good.”

Yale tied the game 3-3 at 3:29 of the second period with a goal from Emma Seitz.

SLU responded with another power-play goal at 9:55 of the second period on a shot from the circle from Kristen Guerriero, with Chloe Puddifant and Claire Dudley assisting.

The final goal came at 13:53 of the second period from Yale’s Rebecca Vanstone on a shot from behind the circle that hit the post and went in.

“It was a strange game,” Bolding said. “Early we were a little sloppy. We are disappointed, of course, but nothing is going to be easy in this conference, it’s challenging every night. I give our group credit to fight back and kick and scrap. I thought we had a lot of good chances in the end.”

n NOTES: The Saints committed no penalties in the game and went 2-for-5 on power plays. ... Abby Hustler and Melissa Jefferies each blocked three shots for SLU. The Saints blocked 12 shots while Yale blocked seven. ... Brittany Gout went 9-6 on faceoffs for the Saints.

The Bears struck first, but Clarkson scored two goals in the second and third periods to pull away for an ECAC Hockey win at Cheel Arena.

Nicole Gosling gave Clarkson the lead for good with a goal at 5:55 of the second period. She went on to add two assists later.

Jenna Goodwin upped the lead to 3-1 at 13:17 of the second period. Laurence Frenette and Kristina Schuler scored in the third period for the Golden Knights.