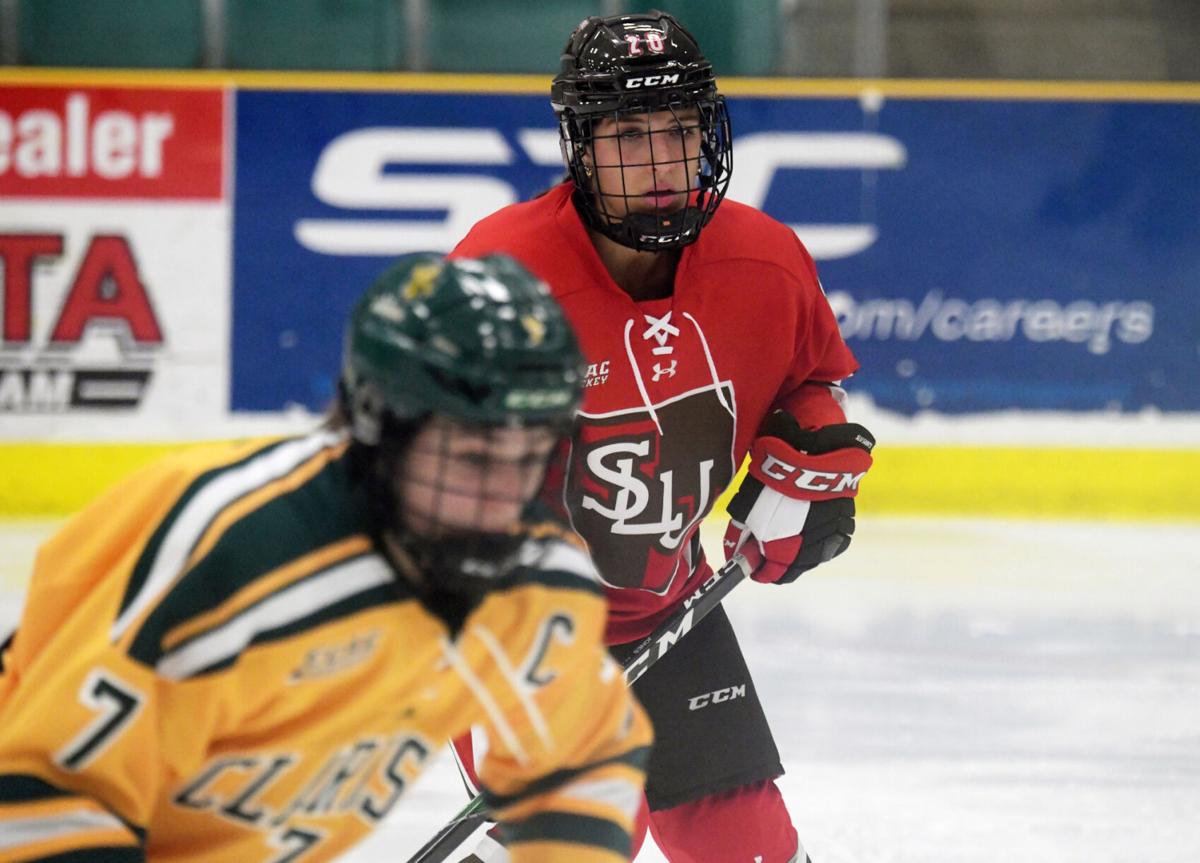 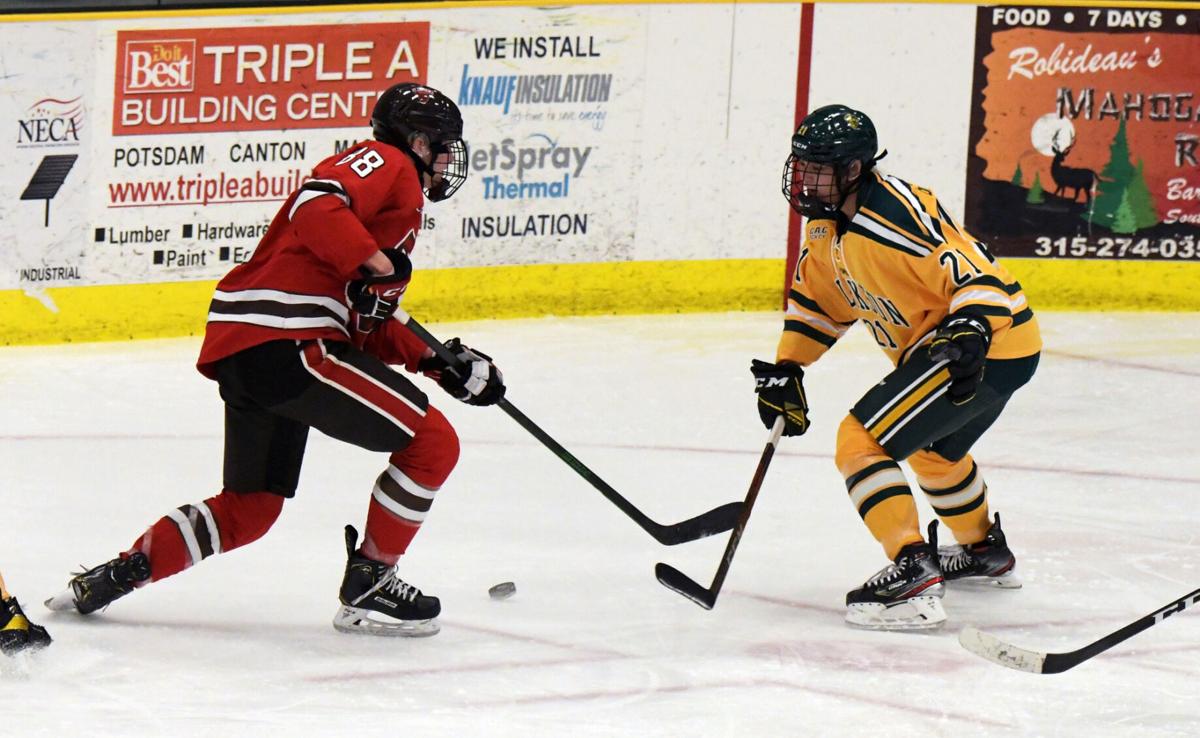 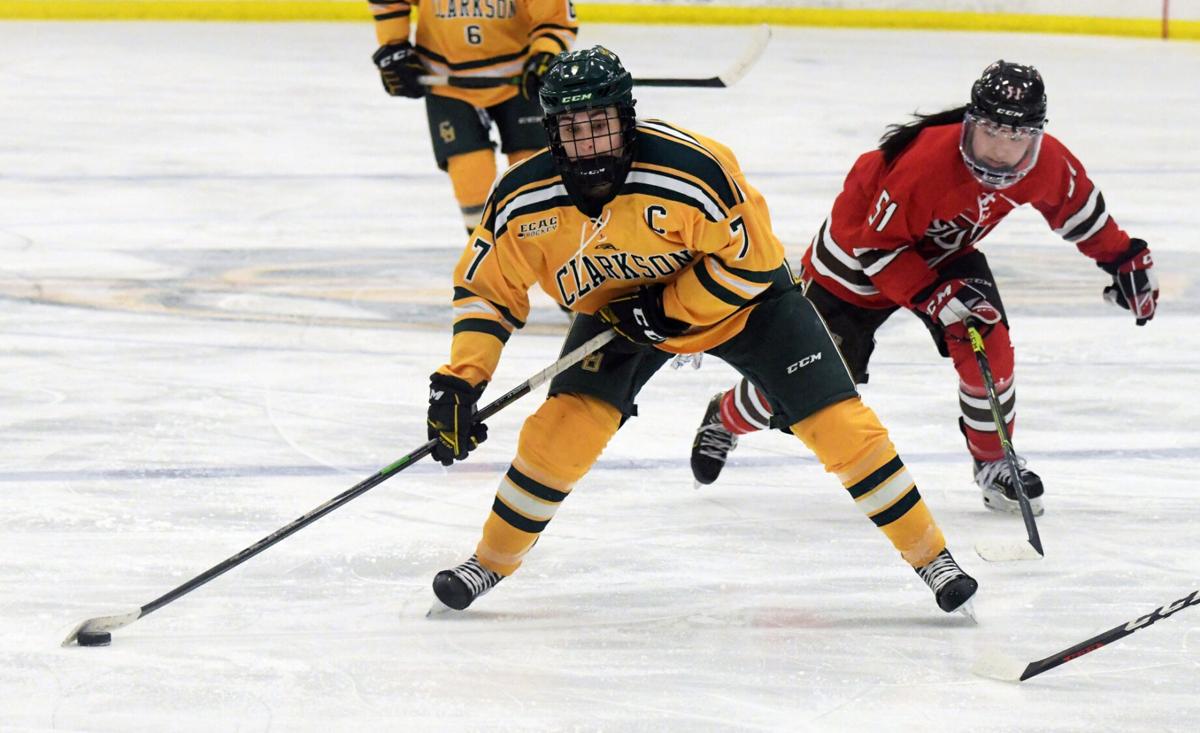 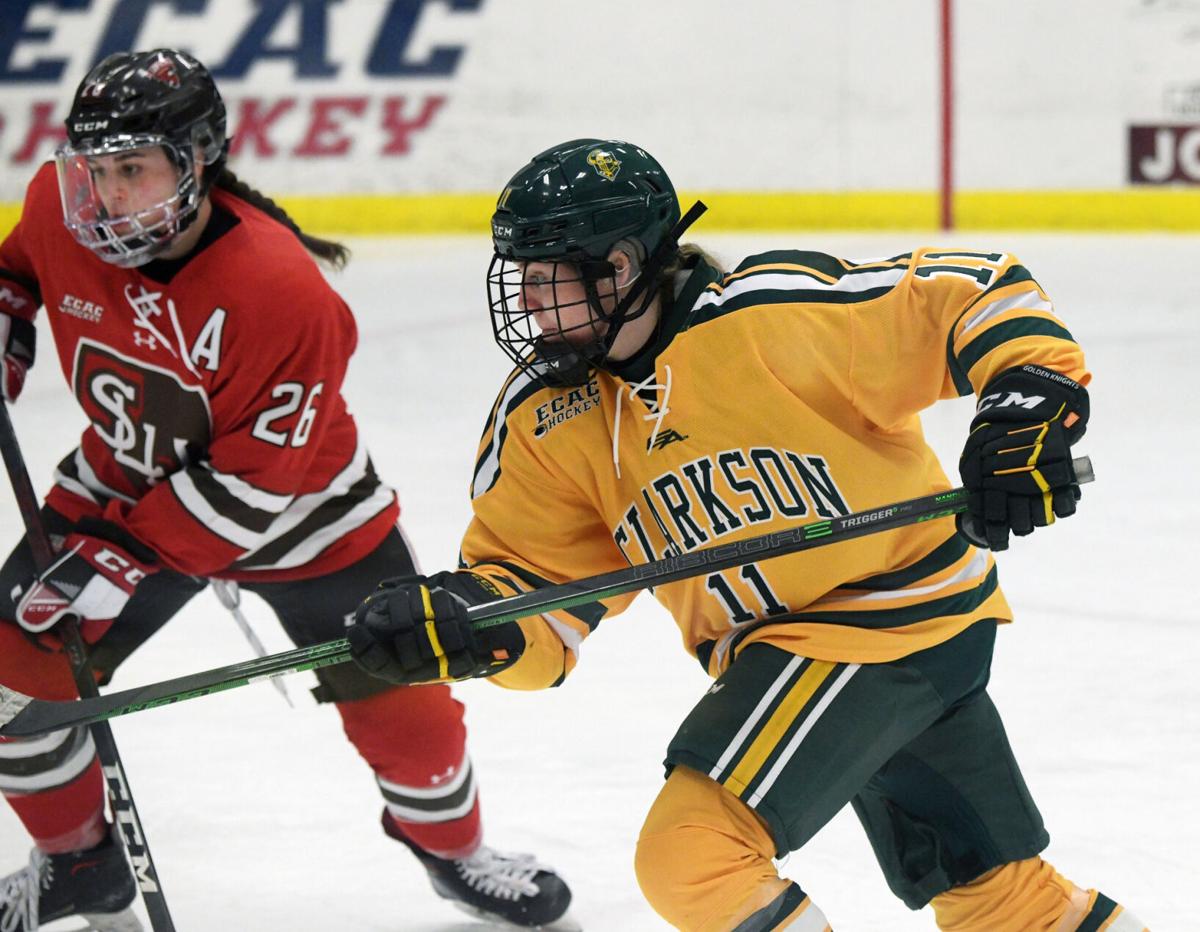 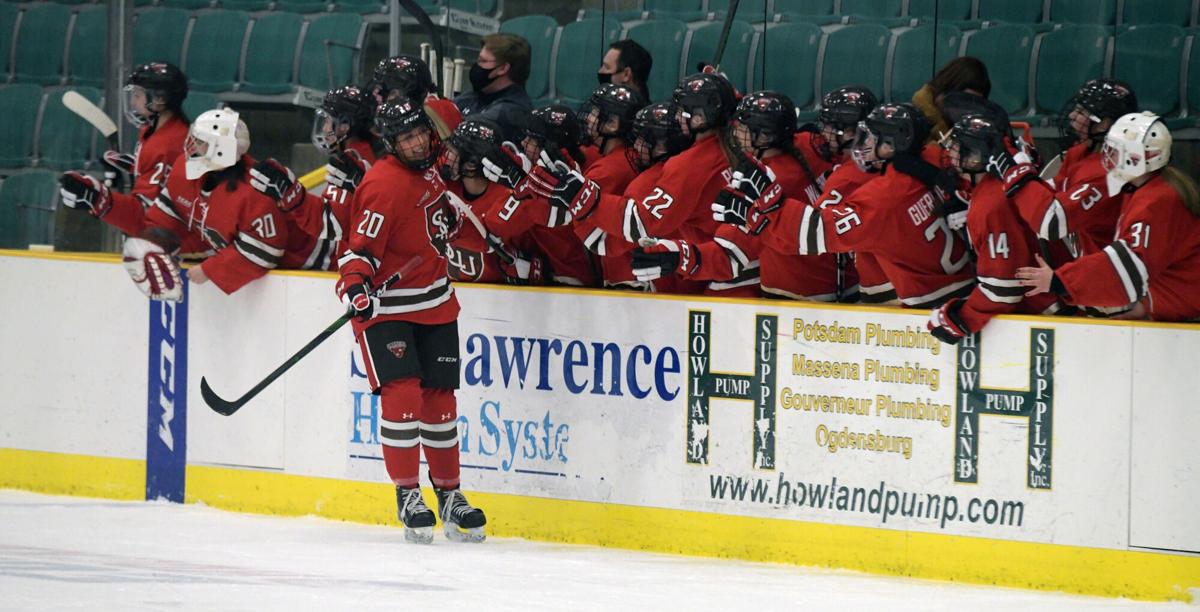 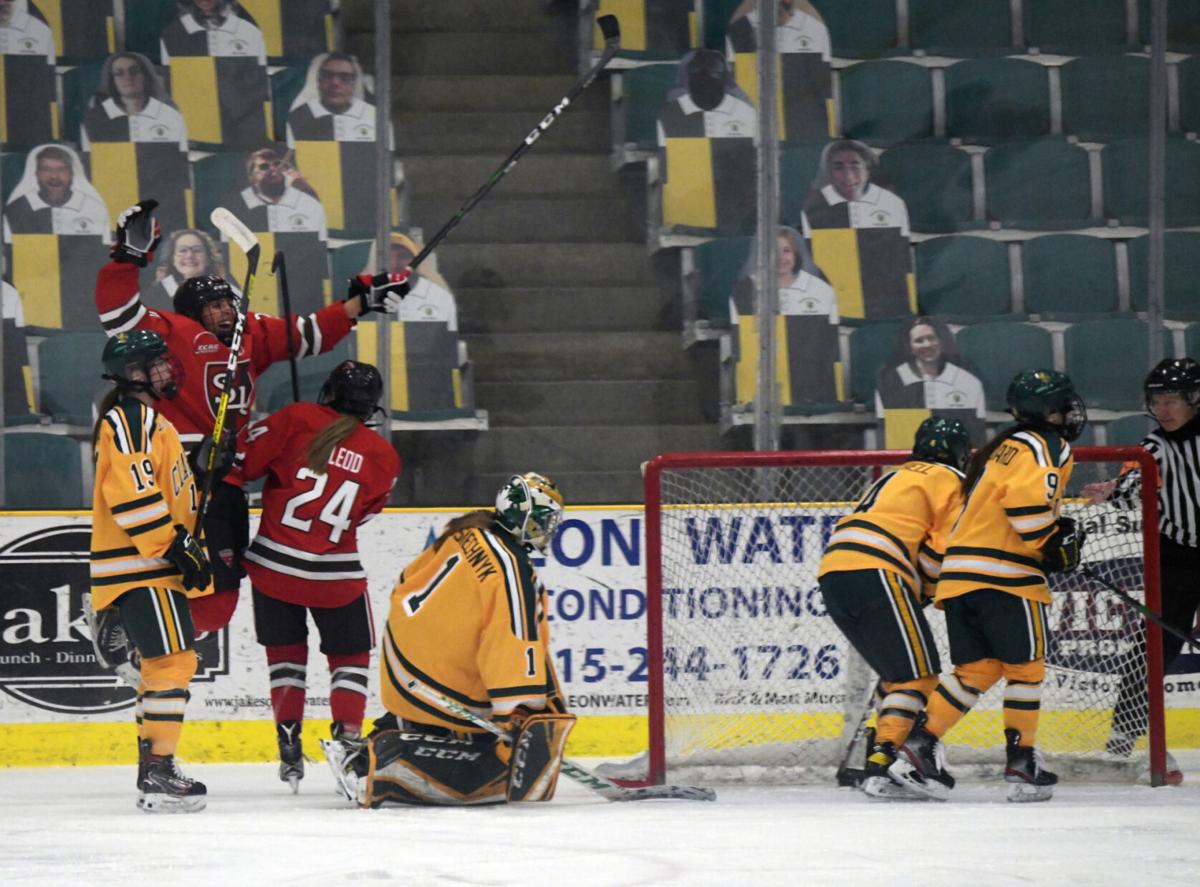 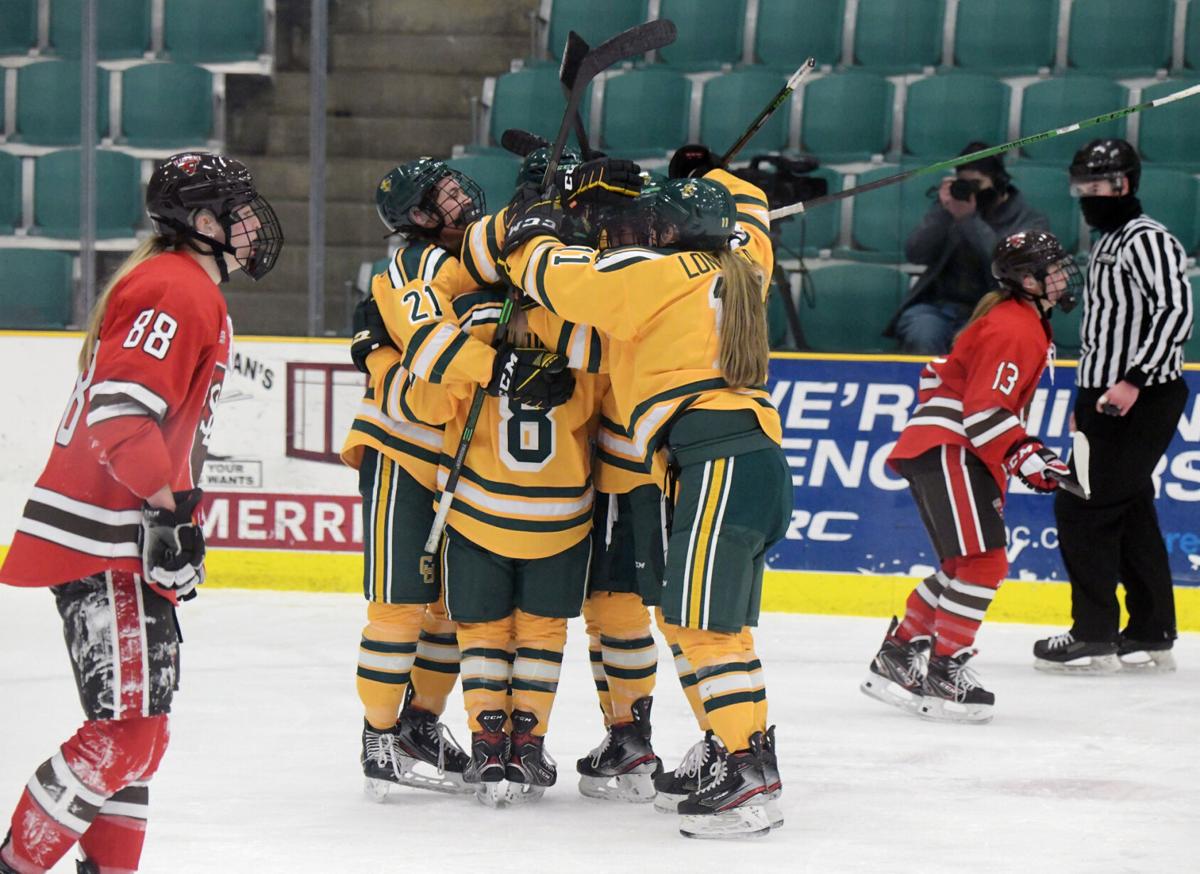 Clarkson players celebrate one of the team’s goals during the third period of Friday’s ECAC Hockey game at Cheel Arena. Clarkson University photo

Clarkson players celebrate one of the team’s goals during the third period of Friday’s ECAC Hockey game at Cheel Arena. Clarkson University photo

Julia Gosling scored 46 seconds into overtime to give the Saints a 4-3 victory over the Clarkson Golden Knights (8-7-1 overall, 3-4-0 conference) in the ECAC Hockey game Friday night.

Gosling came out ahead in her first matchup with her cousin Nicole, a Clarkson defenseman. The winning goal was the second of the game for Julia Gosling, but in the third period the cousins scored back-to-back goals.

In another subplot, Potsdam native Gabi Jones scored the first goal of the game for the Saints at 7 minutes, 3 seconds of the second period. It was the first career goal for Jones, who is the daughter of Clarkson men’s coach Casey Jones, and likely the first time a Clarkson hockey season-ticket holder has scored for a visiting team in Cheel Arena.

“It’s amazing,” Jones said of the experience. “I’ve grown up watching Clarkson my whole life. Being in this building and getting my first goal, it’s a great feeling.”

Though his team lost, Clarkson coach Matt Desrosiers could appreciate what the moment meant for Jones, whose dad has an office just down the hallway on the top floor of Cheel Arena.

“It’s a little crazy, you know,” Desrosiers said. “Since the Joneses got here, we’ve seen Gabi grow up from a little young kid and watched her go through the hockey rinks a little bit. It’s a little bittersweet having her score her first goal against us. But at the same time they are close friends of ours. You can’t help but be happy for her and her family.”

SLU went on the power play late in the second period and had a chance to go up 3-0 when Clarkson’s Caitrin Lonergan scored a shorthanded goal to cut the lead to 2-1 at 16:42.

It was the 13th goal of the season for Lonergan, who was named one of the 10 finalists for the Patty Kazmaier Award on Thursday.

“We’re down by two and if they are able to get (a power-play goal) and make it 3-0, maybe the game’s a little bit out of hand at that point,” Desrosiers said. “Just being able to spark the team a little bit there, with a shorthanded goal, get us back in the game, get our confidence back up a little bit. That kind of helped us claw our way back into the game a little bit.”

Julia Gosling, a sophomore, put SLU ahead 3-1 with a goal just 40 seconds into the third period. Her two goals in this game give her six goals in six games since her return from the Canadian national team tryout camp.

“Clarkson is a rivalry, we’re happy to have it. They are two great female college hockey teams that had an opportunity I think to put on a nice show for whoever was watching.”

Julia Gosling’s goal was matched at 3:15 by one from her cousin, Nicole, a freshman defenseman at Clarkson, cutting the SLU lead to 3-2.

Elizabeth Giguere drew a penalty, being pulled down on a breakaway, that led to a power-play goal from Gabrielle David at 14:45, which tied the game 3-3.

Clarkson needs three points from one of the next two games against SLU, 1 p.m. Sunday and 7 p.m. Monday at Appleton Arena, to clinch a home ECAC Hockey semifinal game next weekend.

“It was really exciting to come back,” Clarkson senior captain Meaghan Hector said after the team’s first game in 19 days. “It was an unfortunate ending, but I think we have more going forward in the rest of the weekend for sure. The rivalry is nothing but thrills. They are going to bring their best game and we know we have to bring our best game. There’s a lot on the line.”