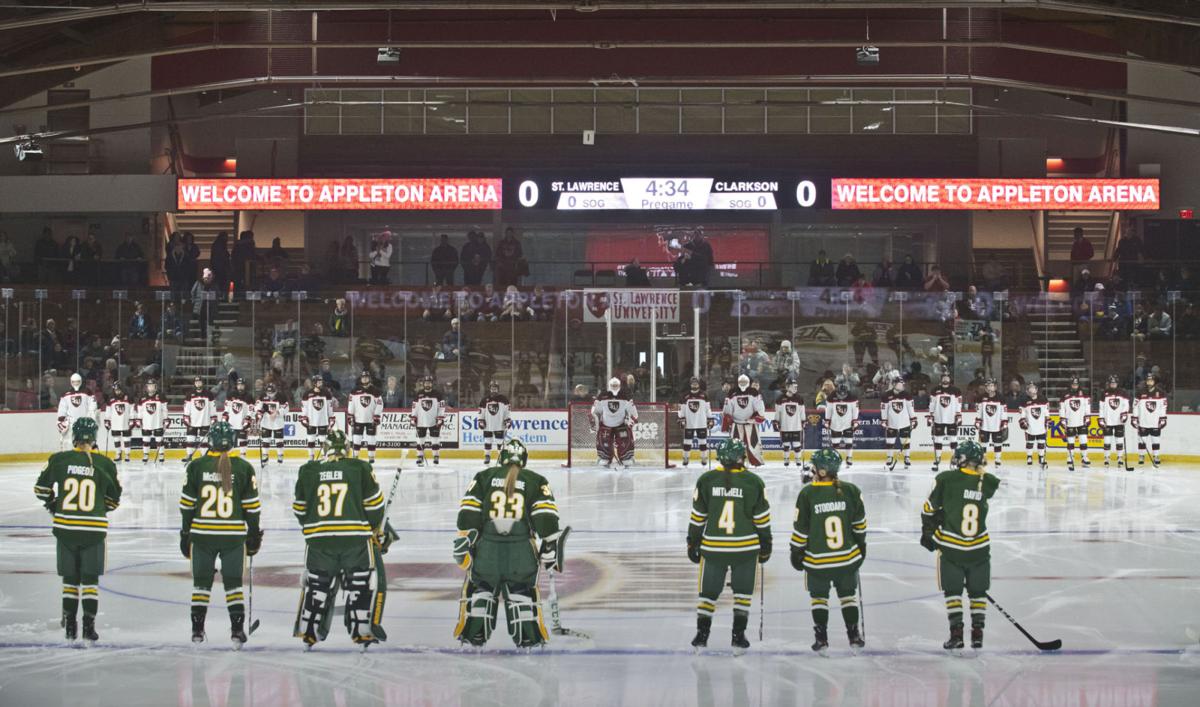 The St. Lawrence and Clarkson women’s hockey teams stand on the ice just before the first game at the renovated Appleton Arena. Christopher Lenney/Watertown Daily Times 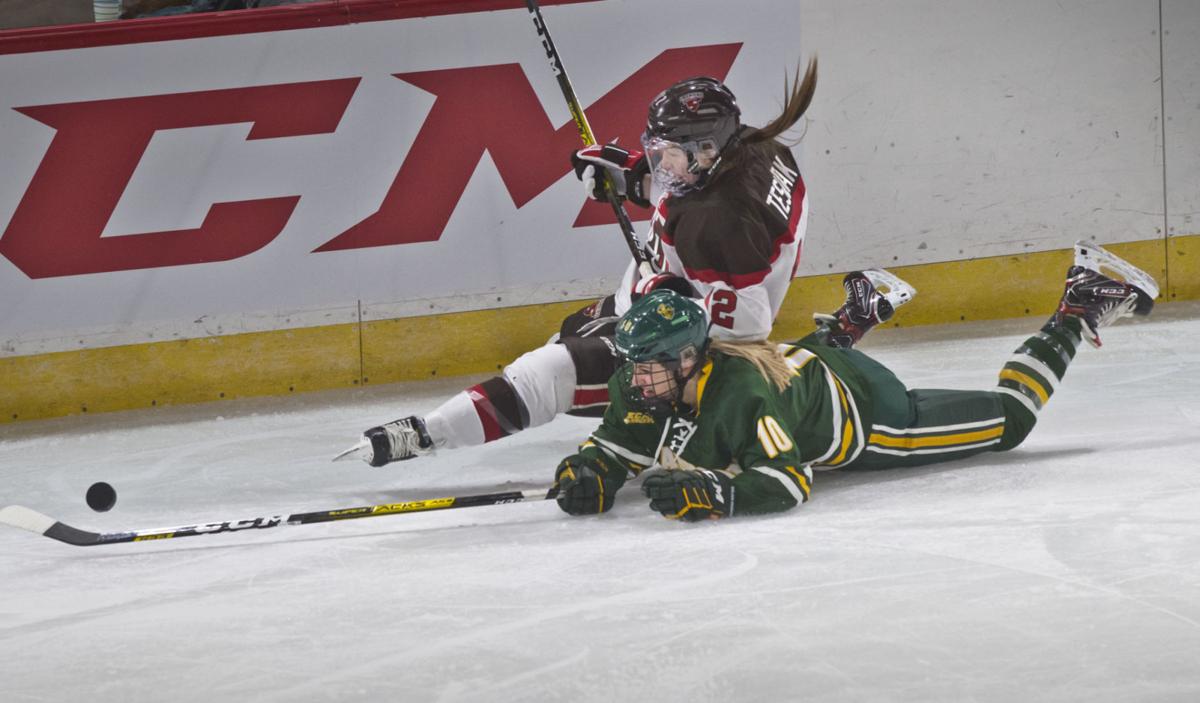 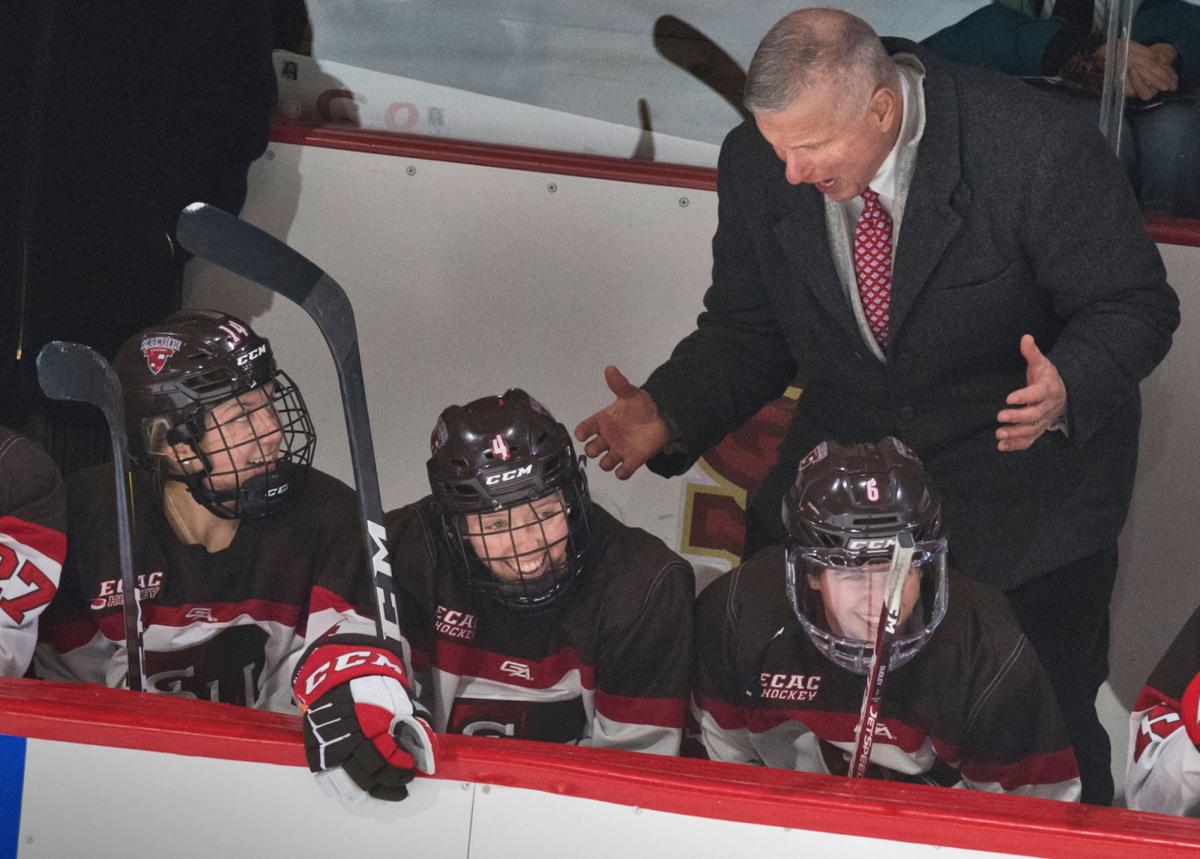 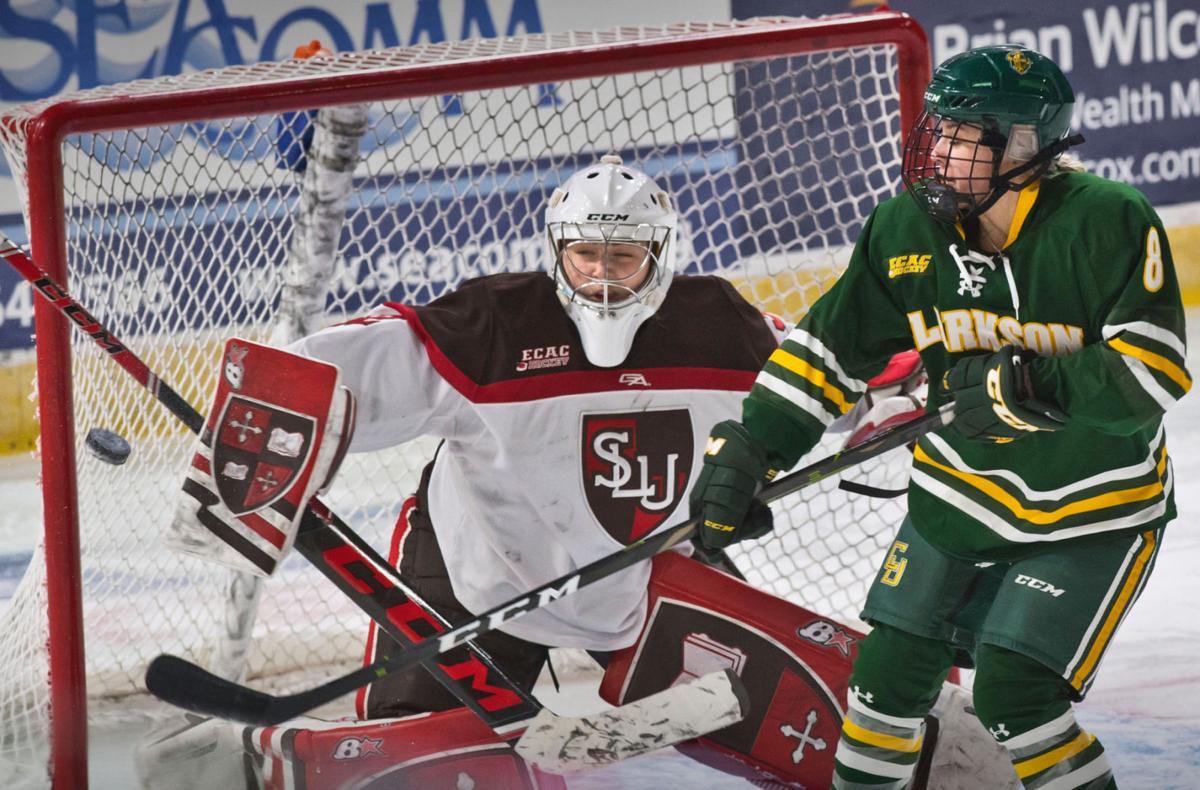 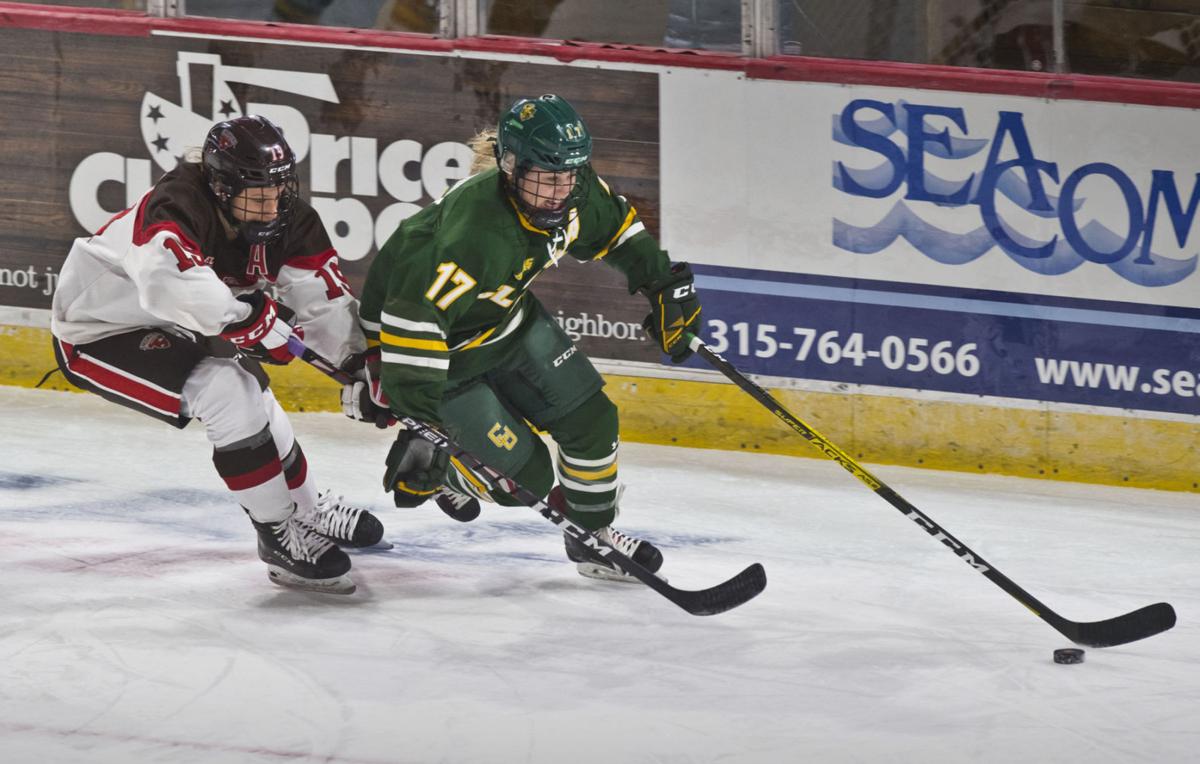 St. Lawrence’s Maggie McLaughlin chases after Clarkson’s Taylor Turnquist as she moves the puck behind the net during the second period of Saturday’s game at the renovated Appleton Arena. Christopher Lenney/Watertown Daily Times

The St. Lawrence and Clarkson women’s hockey teams stand on the ice just before the first game at the renovated Appleton Arena. Christopher Lenney/Watertown Daily Times

St. Lawrence’s Maggie McLaughlin chases after Clarkson’s Taylor Turnquist as she moves the puck behind the net during the second period of Saturday’s game at the renovated Appleton Arena. Christopher Lenney/Watertown Daily Times

It was SLU’s first conference win in almost seven years against Clarkson (16-4-4 overall, 7-3-2 conference) The last time SLU beat Clarkson in an ECAC Hockey game was 3-2 victory in Appleton Arena on Feb. 2, 2013.

“It was awesome, there’s really no words to describe it,” said Saints captain Kalie Grant, a Potsdam native. “To be the first ones to win in (renovated) Appleton is pretty special. (The crowd) was incredible. We were excited and it got the bench going. It’s nice to hear the “SLU” chant. Hopefully they continue to come back, but we really appreciate all the people that came out tonight.”

The first game in the renovated building, which cost about $17 million, featured many new elements, including a new front to the facility, new lobby, wider concourses and a new video scoreboard.

But it also featured a lot of the familiar, from the relatively unchanged wooden seating bowl to former men’s coach Joe Marsh standing behind the bench, this time as a volunteer coach with the women’s team.

“It’s a different look, polished on the inside, but particularly coming in front, it looks great,” Marsh said. “It’s a place that has a lot of tradition so the architects obviously were specially chosen, because they were guys that understood the antiquity of the building. This was a fun day to get back here. I love being with this team.”

Senior defenseman Jacquie Diffley made sure the Saints fans went home happy, scoring the only goal of the game at 11 minutes, 54 seconds of the first period, becoming the answer to a future trivia question with what was just the fourth goal of her career.

“Jessica (Poirier) looked up and saw me and gave me a perfect pass and I just got it to the net and it went in, luckily,” Diffley said.

The Saints (9-9-5, 4-5-2) also picked up a key game from freshman goalie Lucy Morgan, a North Dakota native who finished with 25 saves against a Golden Knight team that ranks ninth in the nation, averaging 3.25 goals-per-game, for her third shutout of the season.

“To get the first shutout in a new building is obviously super cool, but to just get a win is the most important part,” Morgan said. “I can’t even put it into words. It was unbelievable, especially with the fans.”

SLU found a way to shut down one of its biggest nemeses, Clarkson forward Elizabeth Giguere, who entered the weekend with 10 goals and nine assists in her first two seasons against the Saints.

Giguere scored her third game-winning goal against SLU Friday, in a 2-1 victory at Cheel Arena, but saw an 18-game scoring streak snapped Saturday despite putting nine shots on goal.

“(Giguere) had a lot of chances, too,” Saints coach Chris Wells said. “Lucy (Morgan) made some good stops on her and some pucks bounced wide. I don’t think we got a ton of bounces at Cheel, but in the third period (today) we got a lot of bounces. That’s what we need to do to stop Giguere, hope the puck bounces your way. She’s so dynamic, so slippery, the puck always seems to go through the defender and on her stick and she knows when to give it up and when to shoot it. She’s a pleasure to watch, and I still can’t believe she’s got another year to go.”

Clarkson killed five penalties Saturday while SLU was penalized just once. The Golden Knights outshot SLU 10-3 in the first period and finished with a 25-18 edge.

“I think they played well, but I put most of it on us,” Clarkson coach Matt Desrosiers said. “I don’t think we did the things we need to do. We kind of shot ourselves in the foot tonight, not making easy plays, lots of turnovers.”

Said Clarkson captain Ella Shelton, “It’s the first game they’ve played at their rink so they had a lot of energy and a good crowd behind them. They didn’t want to lose that first game so they came out with guns blazing and we just kind of didn’t have that same energy at the beginning.”