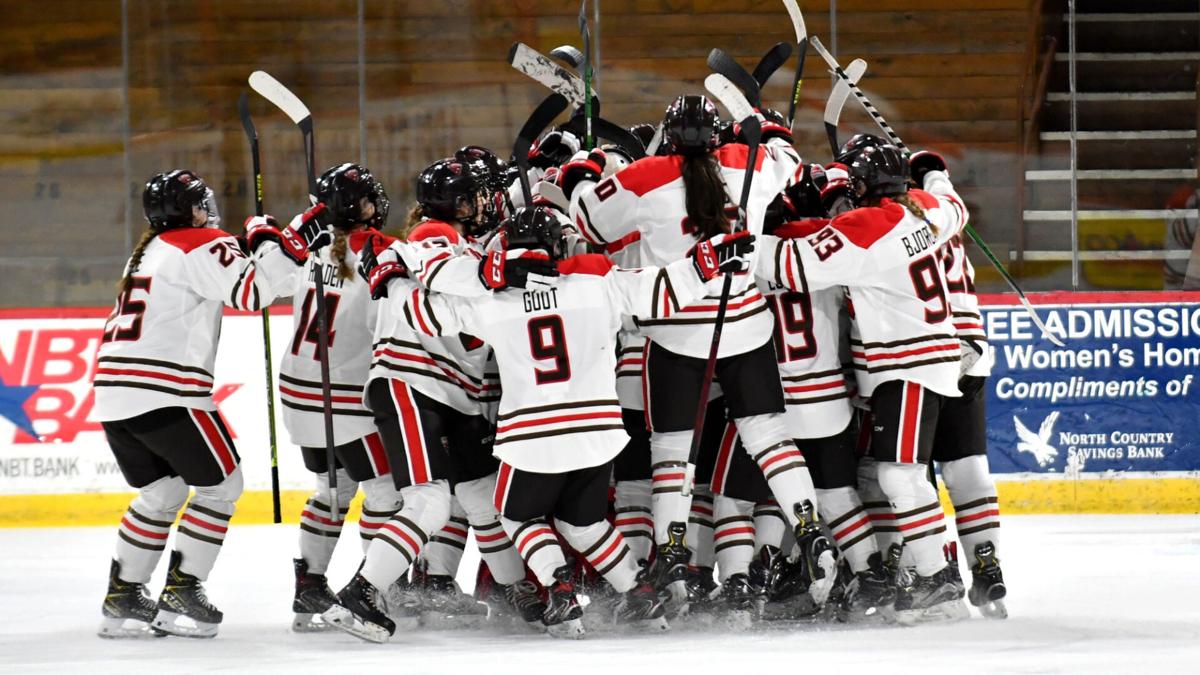 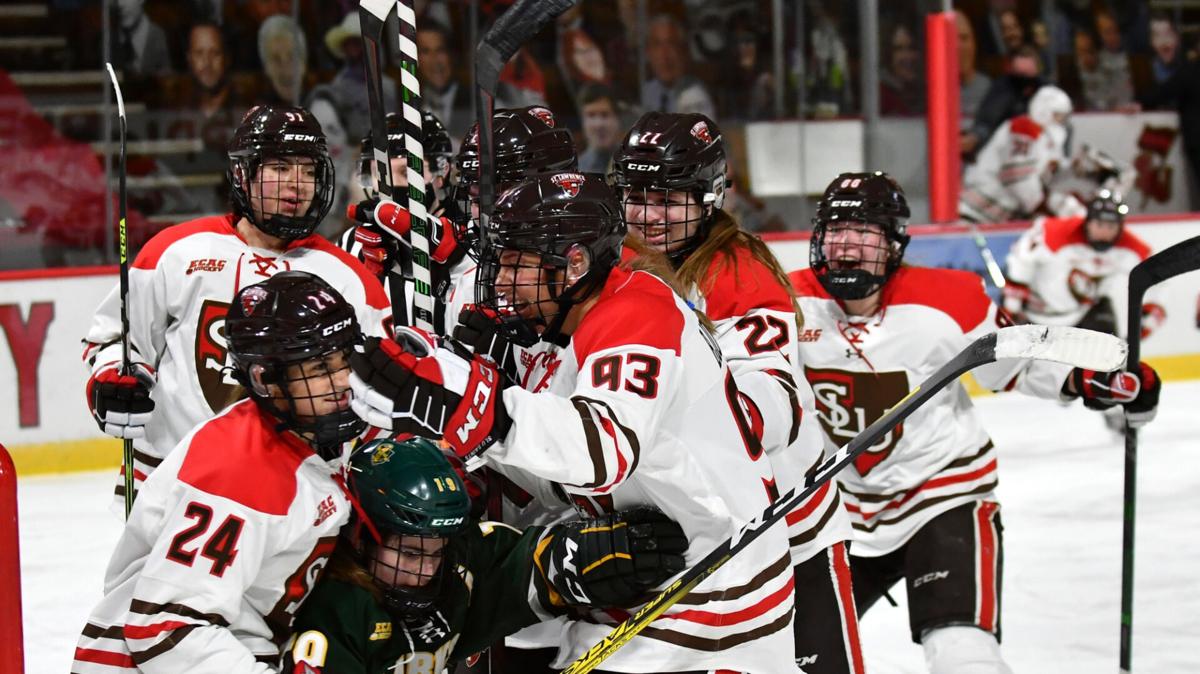 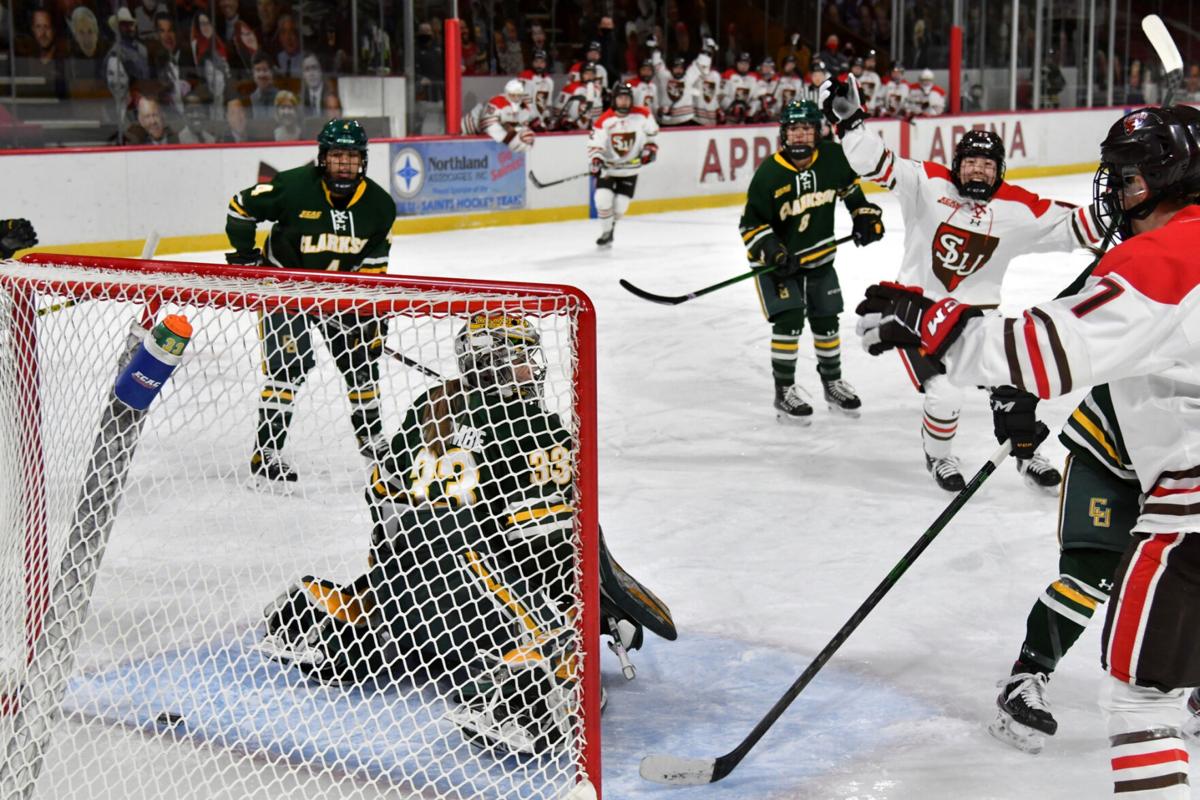 CANTON — Aly McLeod scored the first goal of her career on a crazy play to give the St. Lawrence University women’s hockey team a 4-3 overtime win over Clarkson in an ECAC Hockey semifinal Friday night at Appleton Arena, sending the Saints to the championship game at Colgate at 2 p.m. Sunday.

SLU (6-6 overall) had blown a 3-0 lead and Clarkson was controlling play for most of the overtime period before McLeod’s goal at 13 minutes, 36 seconds.

Chloe Puddifant took a shot that missed the net, hit the boards hard and came right back near the Clarkson crease. Golden Knights goalie Michelle Pasiechnyk didn’t expect to see the puck come back and McLeod got a stick on it.

At first it appeared Pasiechnyk had stopped it, but it squirted through her and rolled into the net.

“It’s a really great feeling,” McLeod said. “The last few games I’ve been a bit snakebitten, but the team never gave up. That’s the best part of it all.”

The Saints were once again missing head coach Chris Wells to COVID-19 quarantine protocols as well as senior defenseman and captain Skylar Podvey.

“We’re a young team, both in class year but also in experience, being in games like that,” Saints assistant Mare MacDougall Bari said. “We really came into the game knowing we didn’t have to make a lot of adjustments after last weekend. We felt if we stuck to our game plan, we could find some success.”

The loss means that Clarkson (8-10-1) will miss the NCAA Tournament for the first time since the 2012 season, but it also came with a little controversy.

Before SLU entered the zone on its way to scoring the winning goal the puck hit a pipe in the ceiling at Appleton Arena. Had any of the officials seen that play would have been stopped right there.

Instead, after the goal, there was a long review before SLU was finally declared the winner.

“It clearly hit the metal rod above their bench there,” Clarkson coach Matt Desrosiers said. “Even the announcers saw it from the ESPN feed. It’s unfortunate that four referees on the ice can’t see that and make that call and stop the play.”

The Saints, who are in their first ECAC Hockey title game since winning it in 2012, won three straight games against Clarkson to end the regular season to earn home ice.

It appeared SLU was headed to an easy win Friday as well, building a 3-0 lead by 11:13 of the second period.

Senior Jessica Poirier scored two of the Saints’ goals. She picked up the first goal of the game at 3:04 of the first period.

Julia Gosling scored at 3:03 of the second for a 2-0 lead and then Poirier picked up her second goal of the game at 11:13 on a power play.

“It’s super special,” Poirier said of making the title game. “This team has put in a lot of work in a really short period of time. I’m really happy that we are finally getting the bounces that we’ve been wanting for a long time. We’re not done.”

Clarkson started its comeback with a goal from defenseman Lauren Bernard at 15:56 of the second period.

The Golden Knights outshot SLU 24-10 in the last two periods of regulation, combined, and cut the lead to 3-2 when Nicole Gosling scored 4:46 into the third.

Desrosiers pulled Pasiechnyk for an extra attacker with two minutes left and then Clarkson got a two-player advantage when SLU’s Claire Dudley was called for tripping at 18:09.

The tying goal came at 19:32.8 on a power-play rebound from defenseman Stephanie Markowski during a scramble in front of the SLU net.

“We kind of dug ourselves a hole and we are chasing the game,” Desrosiers said. “I’m pretty proud of the way the girls rebounded. We could have gone the other way and kind of felt sorry for ourselves and let it get out of hand, but we chipped away and believed and just kept working towards it.”