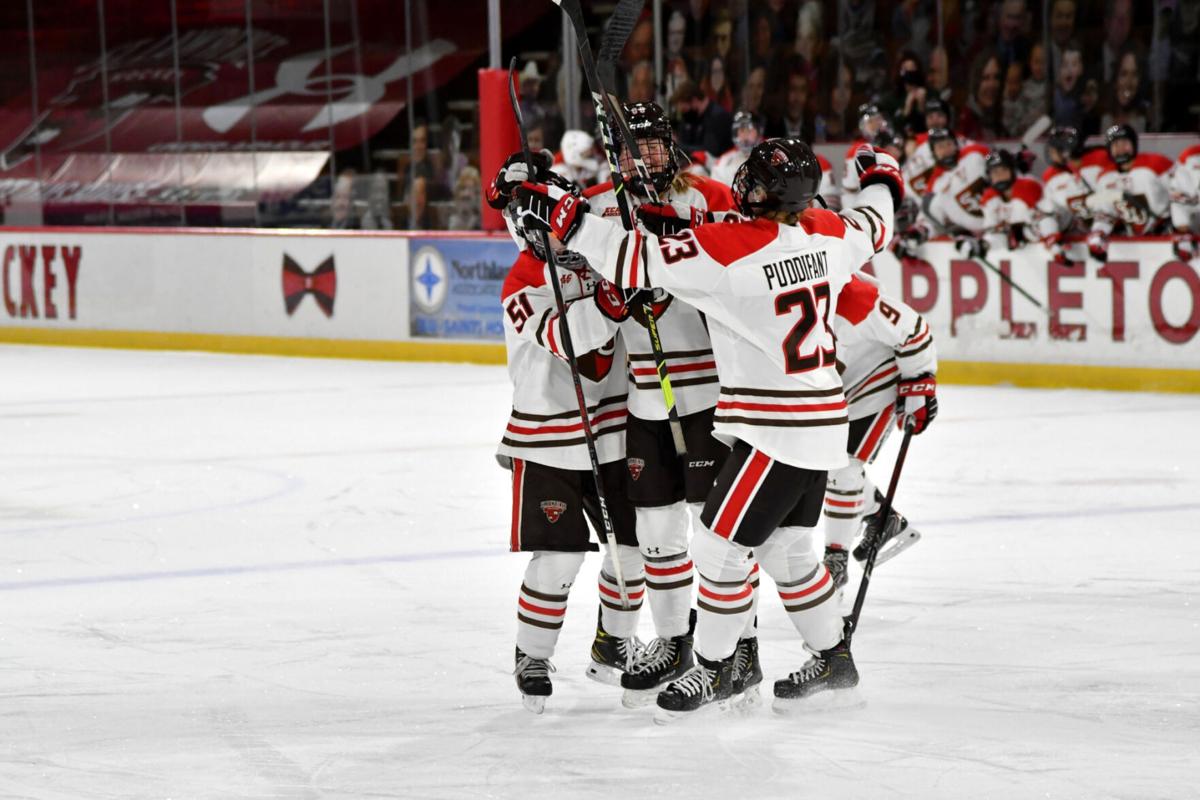 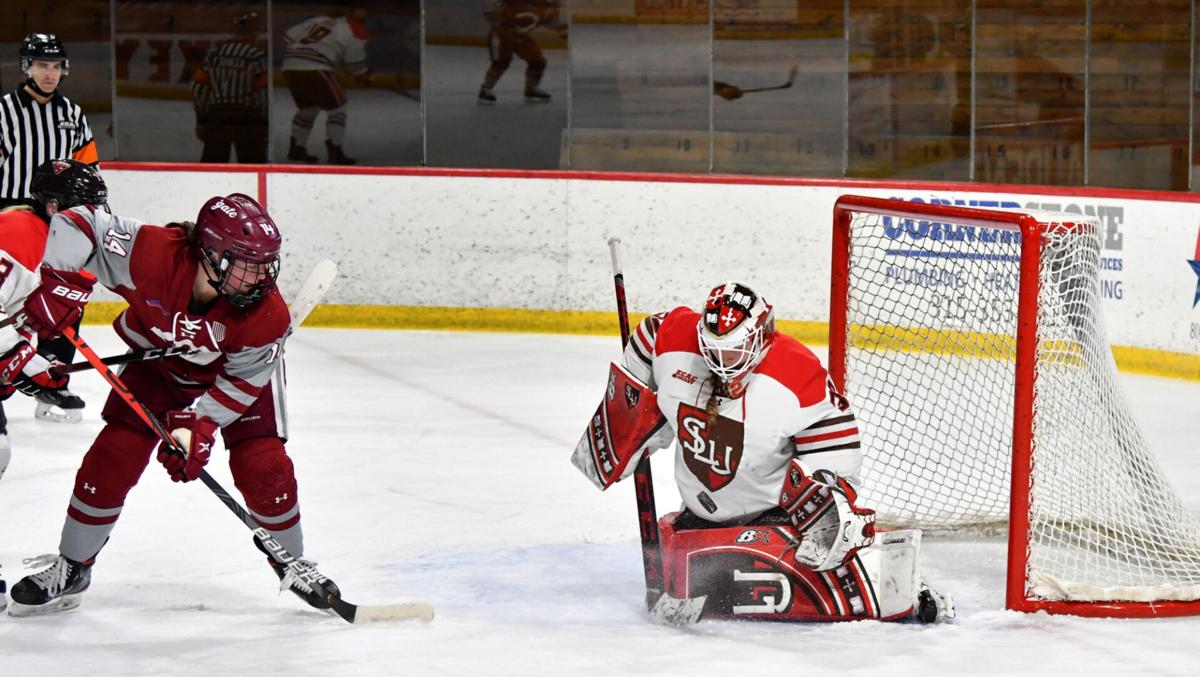 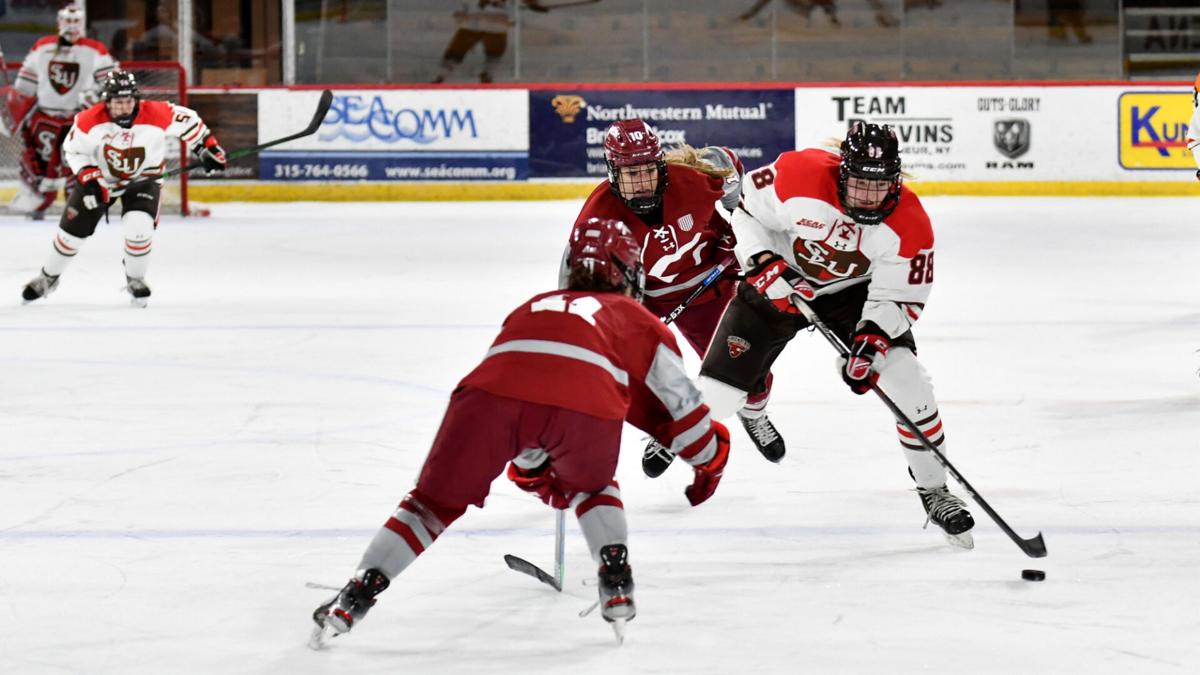 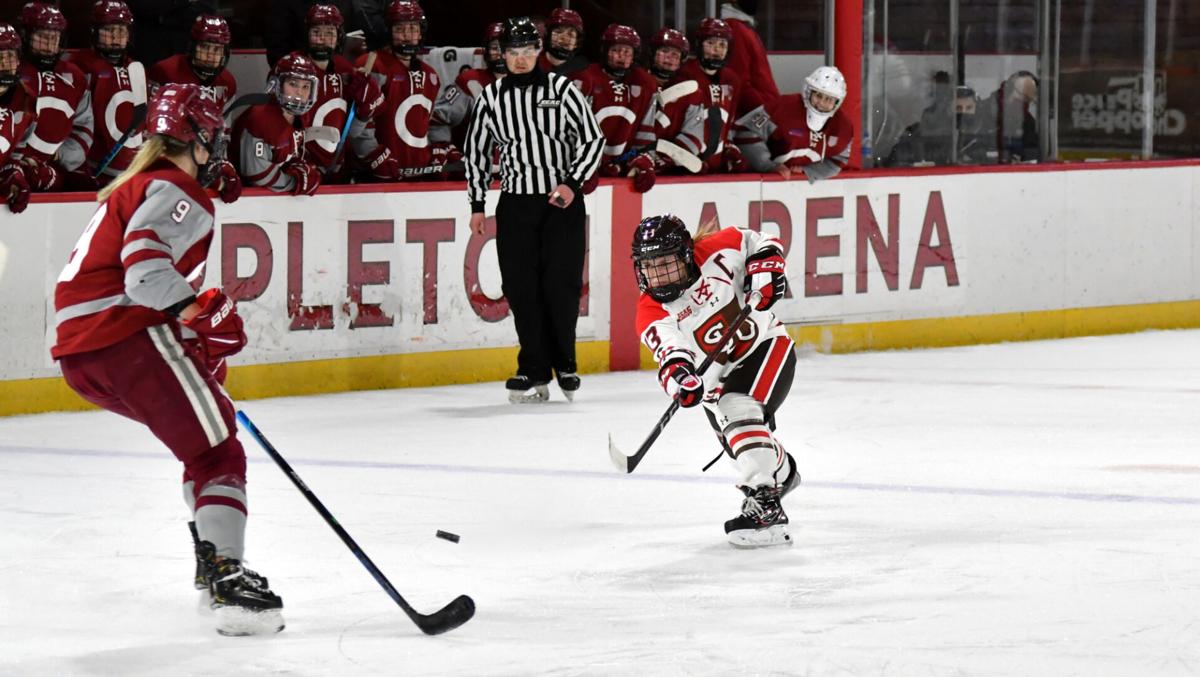 Thirteen of the 20 players who took part in the game for the Saints (2-5 overall, 2-4 conference) were either freshmen or sophomores.

“Overall it was just a resilient team effort,” MacDougall Bari said. “Playing against Quinnipiac last weekend prepared us for our ability to sustain pressure and fight through contact was well-improved after playing such a physical team in Quinnipiac.”

The Saints struck first at 7 minutes, 6 seconds on a power-play goal from sophomore Shailynn Snow.

Snow was almost tripped up at the Colgate blue line during a power play, but chipped the puck over a defender, skated in and put a backhanded shot between the legs of Raiders goalie Kayle Osborne.

The next time the Saints got a power play they capitalized again, this time with a blast of a goal from sophomore Julia Gosling, who missed the first three games of the season while trying out for the Canadian national team.

Gosling’s shot from behind the circle at 12:13 flew by Osborne and looked hard enough to possibly damage the net. It was her fourth goal in four games and was assisted by Brittney Gout and Anna Segedi.

“Brittany Gout passed it straight to the perfect place for me to take a one-timer. It just went right in. It was really exciting,” Gosling said. “It’s been great just getting back with the team, I’m really happy with our start so far. I’ve definitely gained a lot of confidence and learning from those national team players has helped me out here.”

Colgate (11-5-1, 6-3-0) answered early in the second period with a goal 2:22 in on a shot from Delani MacKay from the bottom of the circle. She received a pass from her sister, Eleri, and Tanner Gates also assisted.

Gosling had a chance to extend the lead to 3-1 at 11:06, but Osborne made a save on a mini-breakaway.

Gosling thought she had scored another goal just 13 seconds into the third period, but after a video review it was determined that another SLU player had collided with Osborne before her shot.

Snow finally got SLU back ahead by two goals when she scored on a breakaway after a Colgate turnover at 4:28, putting another shot between Osborne’s legs.

“It’s definitely energetic and enthusiastic,” Snow said afterward. “I think, for myself, it upped my mood. It really got the team jumping. It’s what we look for to do anything we can do to get the momentum going. It definitely brings us, as a team, momentum. We played them twice before and both times ended in (overtime) with unfortunate losses.”

The Raiders got back within a goal at 9:50 when Nemo Neubauerova scored on another play that was reviewed, but this time upheld.

SLU preserved the win when freshman Melissa Jefferies helped keep the puck pinned against the boards for close to 30 seconds late in the game, leading to the clock running out on the Raiders.

“I just couldn’t be happier with the way the young kids have jumped in,” MacDougall Bari said. “They’ve been taking classes online and going into quarantine. I couldn’t be more pleased with their resilience as a group. I know we aren’t seeing them without masks very often, but you know there are smiles under those masks.”

It was a good special teams day for the Saints, who scored on two of four power plays and killed all three of their penalties.