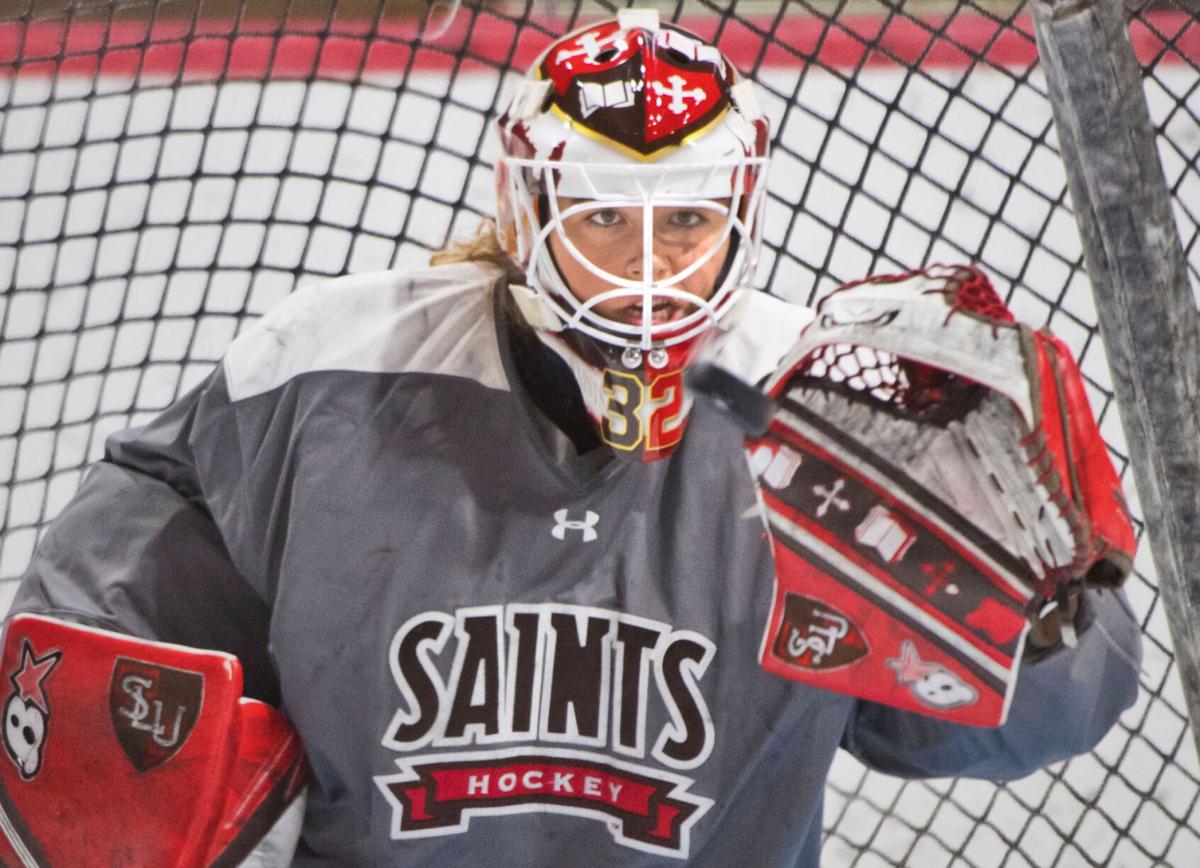 St. Lawrence goalie Lucy Morgan makes a glove save during practice. Morgan has established herself as one of the top goalies in the ECAC in her first two seasons. Christopher Lenney/Watertown Daily Times 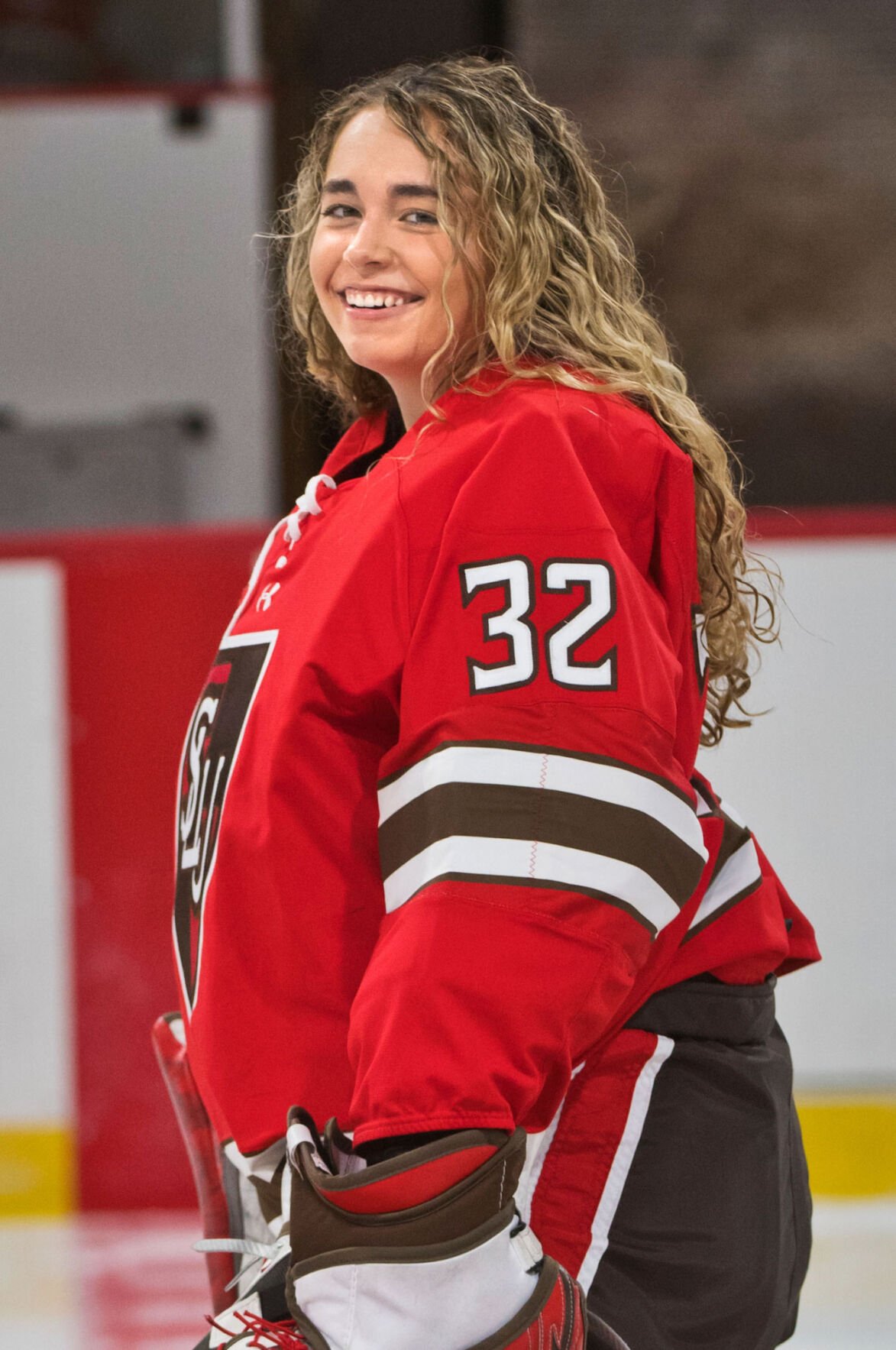 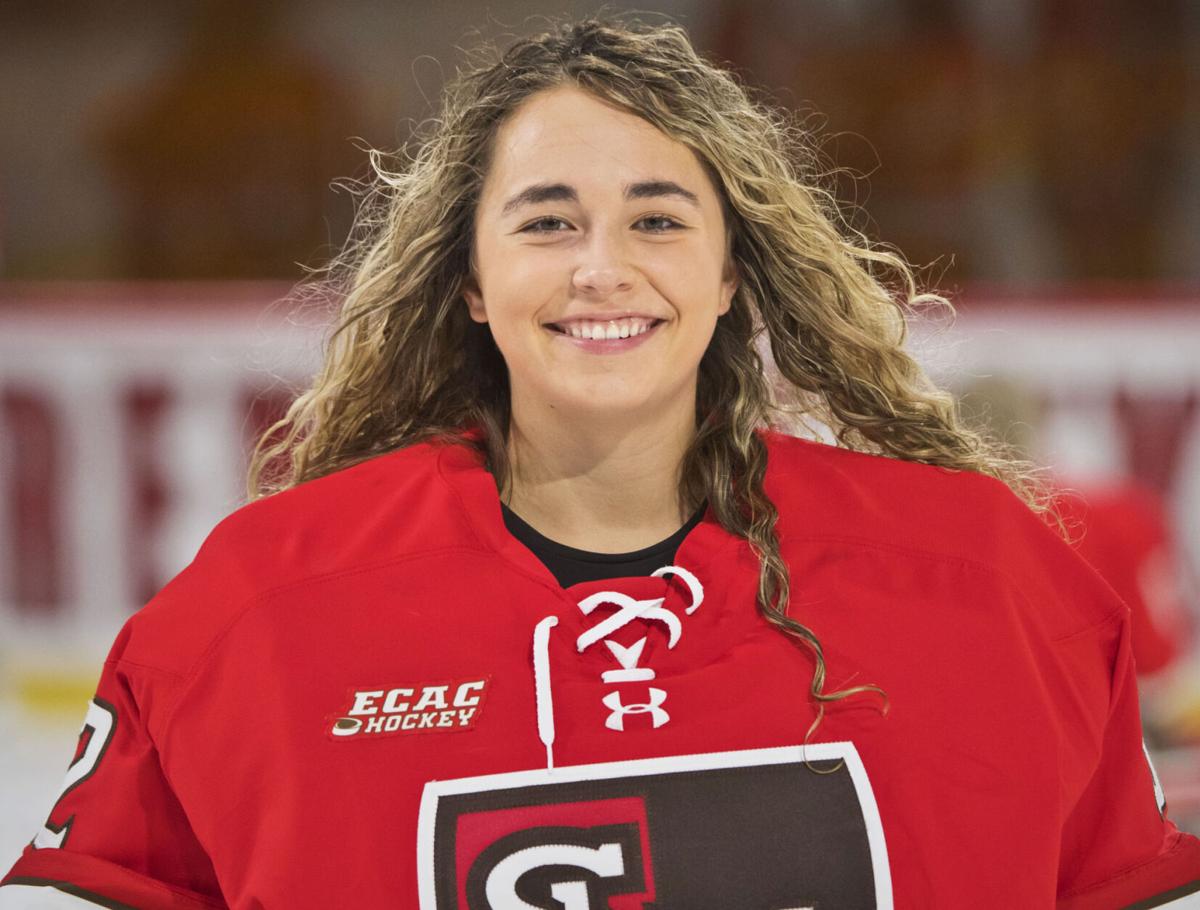 St. Lawrence goalie Lucy Morgan makes a glove save during practice. Morgan has established herself as one of the top goalies in the ECAC in her first two seasons. Christopher Lenney/Watertown Daily Times

CANTON — Lucy Morgan just wanted a chance to show college women’s hockey coaches how good of a goalie she was.

But growing up in Mandan, N.D., Morgan did not competing at a high level of high school hockey and she went unseen by college recruiters.

“Women’s hockey isn’t as big a sport (in North Dakota) as other sports there,” Morgan said. “That being said, it’s not very well-developed. Not a lot of coaches come watch your games.”

In an effort to get noticed, she moved to Minnesota for her last two years of high school, playing for Maple Grove High School.

Despite putting up save percentages of .949 and .939 there, she still had issues being noticed because most (Midwest) colleges were looking at eighth graders or freshmen at the time, since they had already committed to players in Morgan’s age group two years earlier.

“I was like, darn it,” Morgan said. “But the east coast leagues were still recruiting juniors and seniors.”

Morgan decided to be her own promoter at that stage and sent emails to coaches that included some of her video highlights.

One of the coaches who received Morgan’s email was St. Lawrence University’s Chris Wells, whose team had just been swept in the 2019 ECAC Hockey quarterfinals by Princeton.

Had the Saints won that series, Wells said he might not have even opened the email because he would have been busy preparing for the ECAC Hockey semifinal.

SLU’s playoff series loss wound up being a gain, because Morgan came to Canton the following year and has established herself as a top NCAA women’s hockey goalie, with save percentages of .928 and .933 in her first two years, as well as four shutouts in 29 games as a freshman.

“(Minnesota high school) hockey is like everyone’s dream,” Morgan said. “You get to play at the Xcel Center, if you make it to the state tournament, which is the home of the Minnesota Wild. Everyone comes to the game, whether it’s girls or boys. You get a student section.

“It definitely prepared me. What helped me the most was being able to get some goalie coaches in Minnesota, whereas in North Dakota I wasn’t. That was a bigger factor than the league itself. That league improved my game to the point where I could make the (Division I) jump pretty smoothly.”

Morgan helped lead the Saints to the ECAC Hockey championship game last season, which SLU reached by winning four straight games against rival Clarkson in a span of eight days.

“With my painful recruiting process, I always felt like I deserved better, more hype and stuff,” Morgan said. “No coaches believed in me, so I kind of expected the same out of this coaching staff. But Wellsy’s like, ‘No’. He started to rotate three goalies (early in her freshman year) and after that he picked me and said I deserved the spot. That surprised me. After that I wasn’t surprised anymore. I knew all along that I did deserve someone to believe in me,”

Said Wells, “She continues to work and continues to want to get better. She does a lot of special goalie drills. She’s always looking at goalies she tries to emulate. She’s come right in, took about a week or two to settle in. Once we put her in ... she stopped the puck in games.”

The Saints found out last year how much a season can change in one week.

On Feb. 21 the SLU women’s team was 2-6, but then ended the regular season by winning three straight games against Clarkson to finish 5-6, earning home ice for an ECAC Hockey semifinal game against the Golden Knights.

SLU won that contest 4-3 in overtime to reach the championship game where the winning run ended with a 3-2 loss to Colgate.

Said Morgan, “We are in an awesome place right now. We know we have something special here. I can’t wait to showcase it against Penn State Thursday.”

The Saints already face some challenges as they get ready to head to Penn State for the nonconference opening series Thursday and Friday.

SLU’s top two scorers from last year, juniors Anna Segedi and Julia Gosling, will both miss the entire season due to Olympic-related activities.

Also missing is sophomore Taylor Lum for the same reason. Segedi and Lum will play for China’s team in the 2022 Winter Olympics and Gosling is trying out to play for Canada.

The three combined to scored 12 of SLU’s 30 goals last season.

“It’s like losing kids to graduation,” Wells said. “A lot of kids are excited to jump up and fill in some holes. We have a lot of energy. The kids are having fun and moving the puck well.”