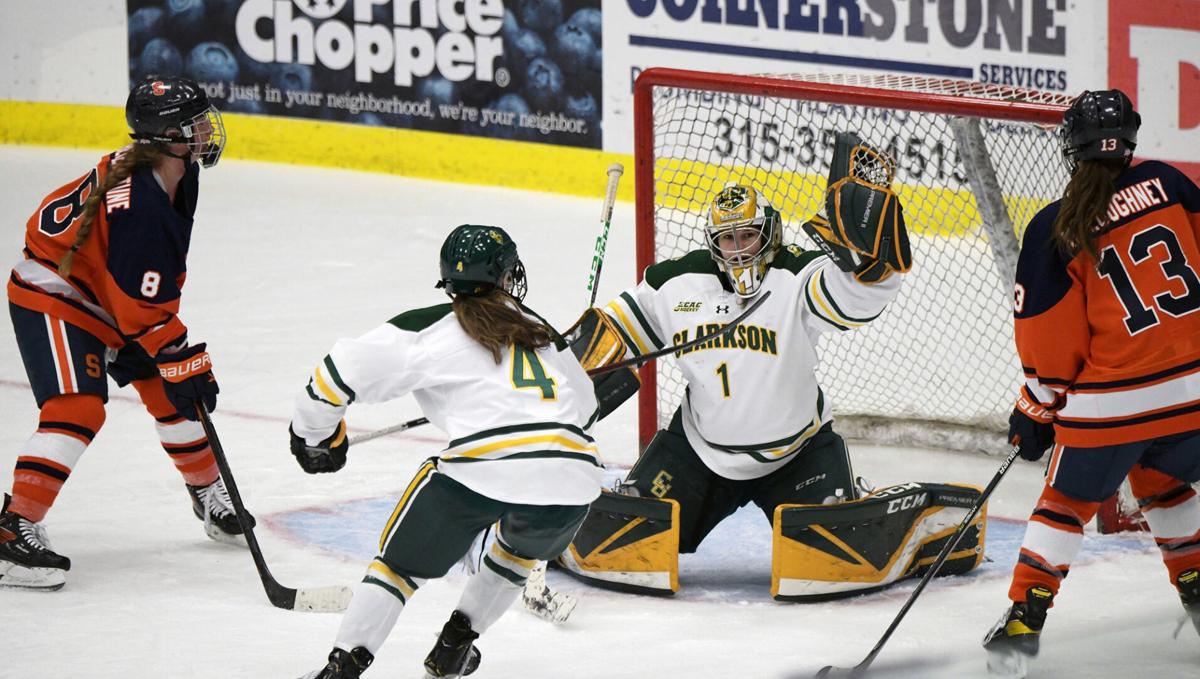 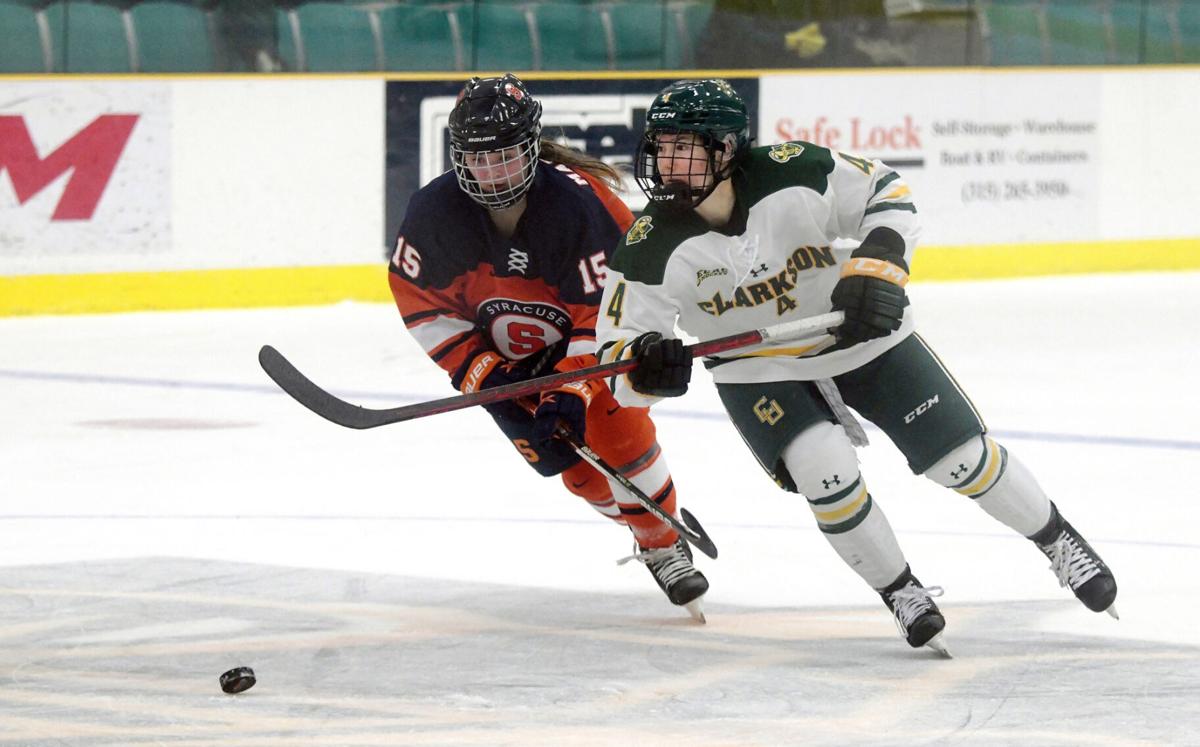 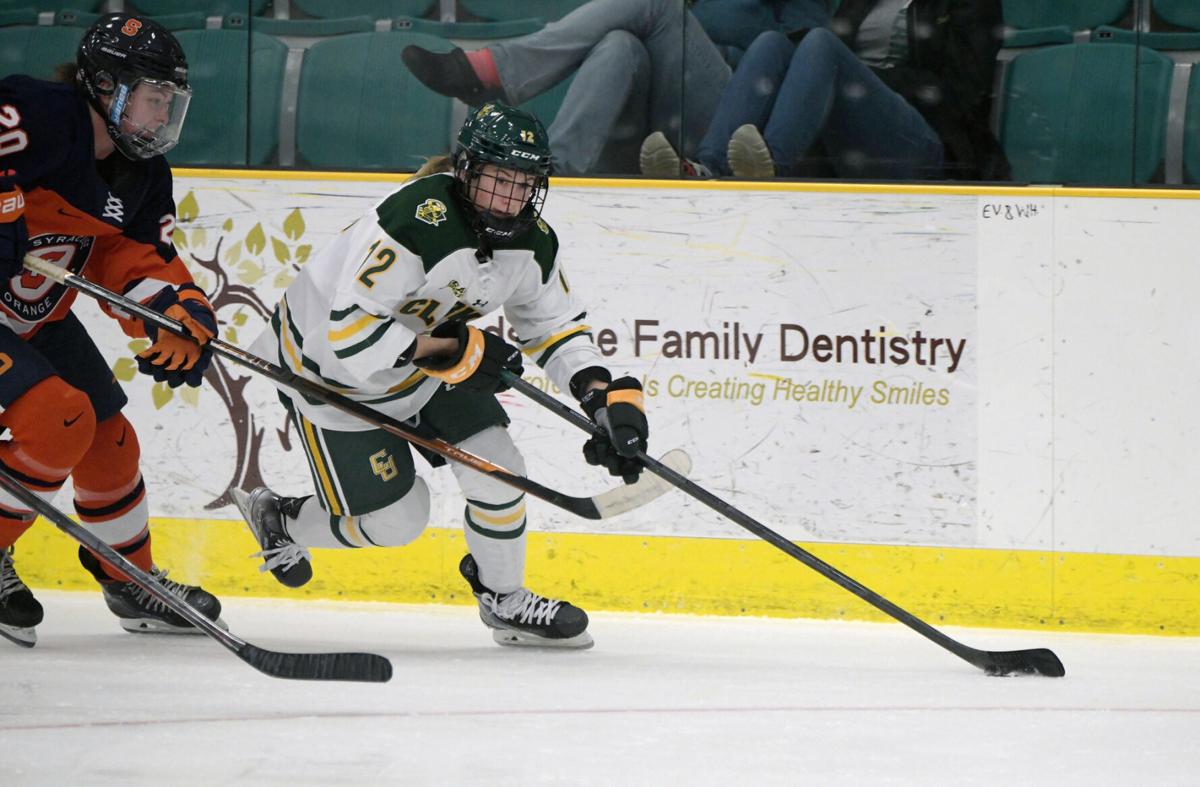 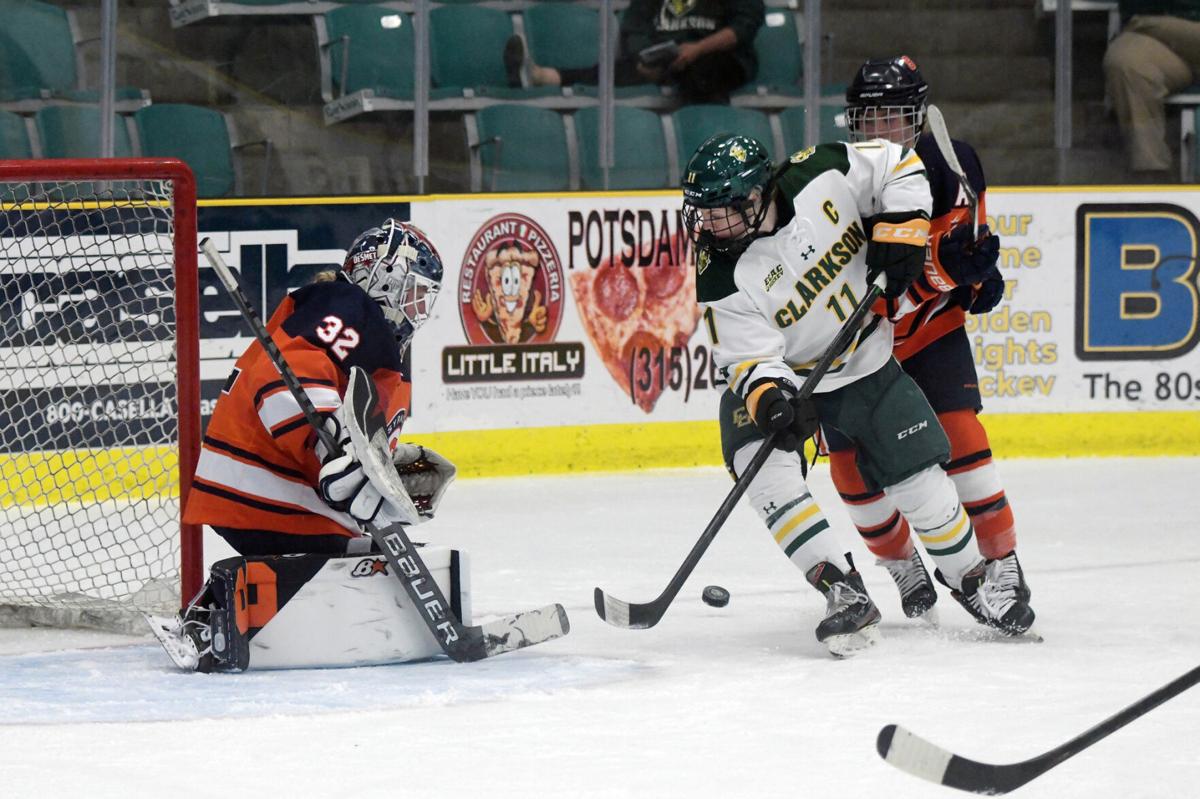 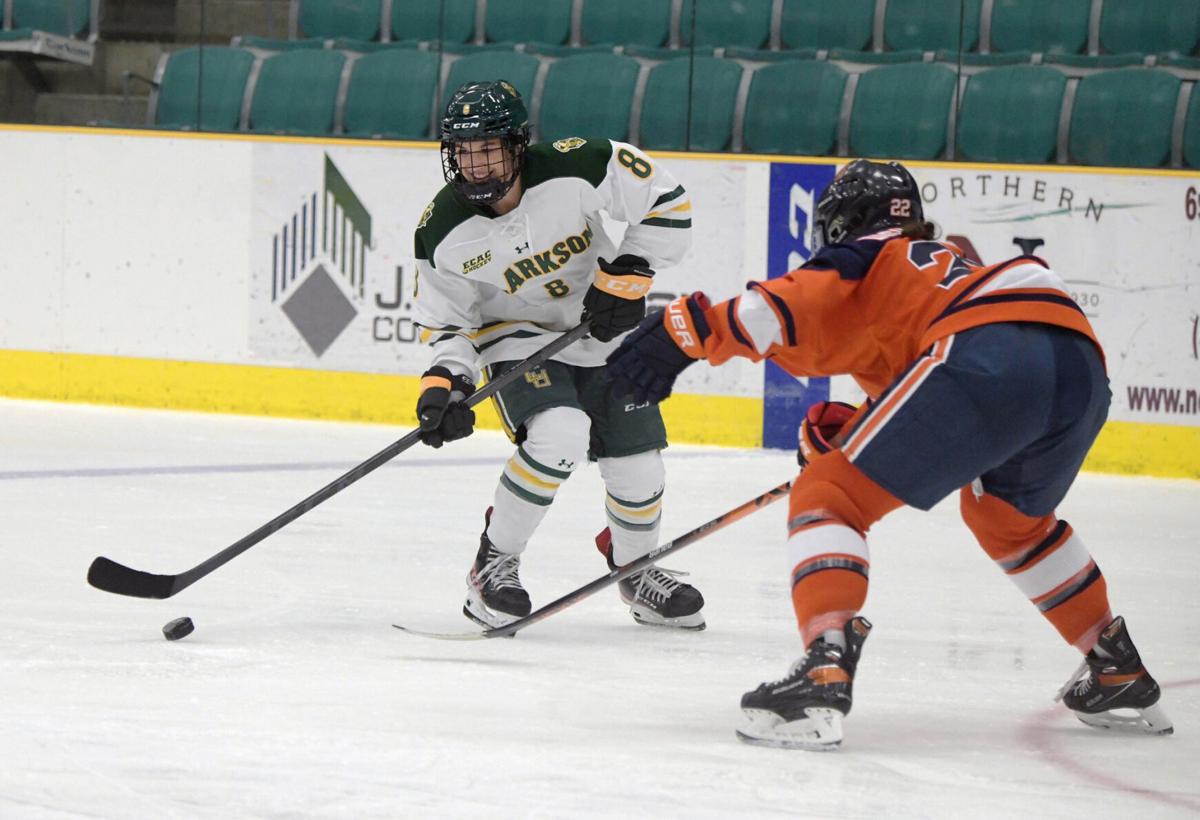 Clarkson’s Gabrielle David, left, prepares to pass the puck away from a Syracuse defender during Saturday’s game at Cheel Arena. Gary Mikel/Clarkson University 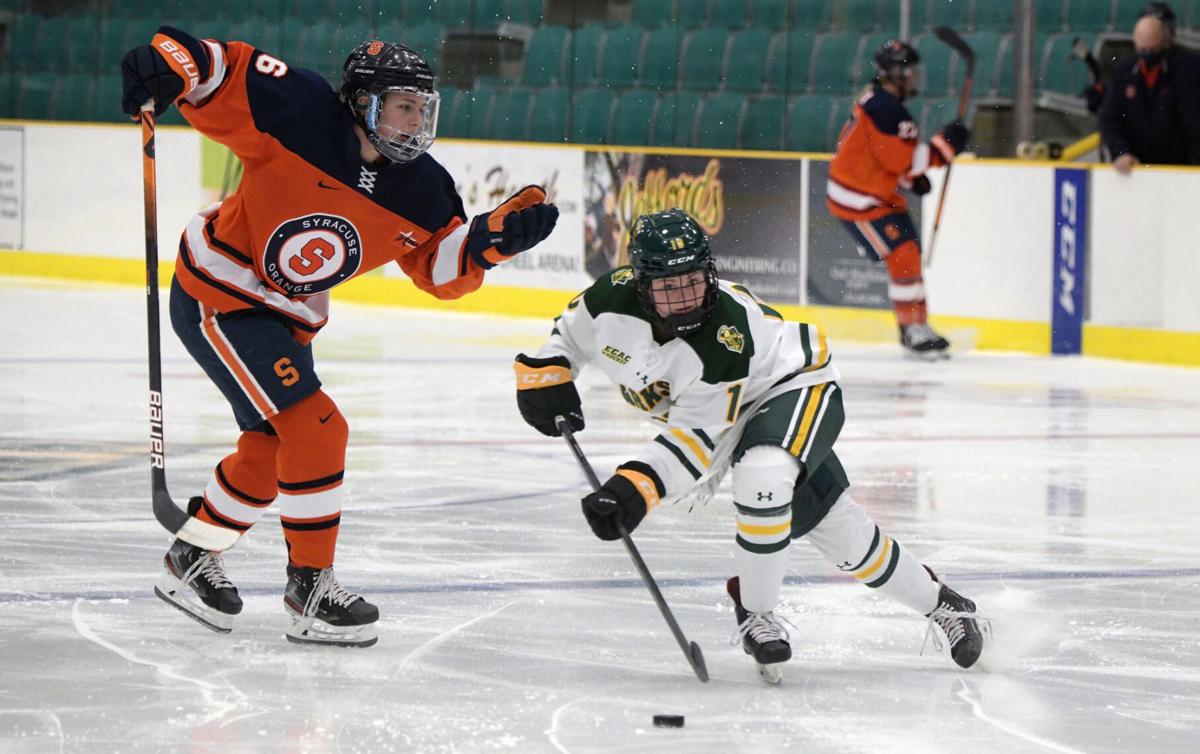 Clarkson’s Gabrielle David, left, prepares to pass the puck away from a Syracuse defender during Saturday’s game at Cheel Arena. Gary Mikel/Clarkson University

POTSDAM — Syracuse’s women’s hockey team returned home without a loss for just the third time in 22 games against Clarkson after skating to a 1-1 tie in a nonconference game Saturday at Cheel Arena.

The Orange entered Saturday’s game having gone 1-19-1 in its history against Clarkson.

But after losing a tight 3-2 overtime game at home against Clarkson on Thursday, Syracuse came into Saturday’s game with some confidence.

“We talked about how this was going to be a character game for us today, because it was a tough loss Thursday night,” said Orange coach Paul Flanagan, a Canton native and former St. Lawrence University player and women’s head coach. “We come up here, where we traditionally have struggled, I think our kids really had great attitudes. We got outshot, but we had as many “Grade A” chances. For us, we got some confidence against a very-good team. I think this club is understanding what it’s going to take to be successful.”

Syracuse (0-2-2 overall) got off to a slow start as the Golden Knights outshot the Orange 12-3 in a scoreless first period.

The Orange started strong and gained momentum in the second period, including two breakaway chances for Lauren Bellefontaine just 31 seconds apart, each thwarted by saves from Clarkson goalie Michelle Pasiechnyk.

Clarkson’s Gabrielle David was called for hooking at eight minutes of the second period and Syracuse responded with a power-play goal from Abby Moloughney at 8 minutes, 50 seconds to take a 1-0 lead.

Sarah Marchand and Mae Batherson picked up assists on the goal.

“We were working on that a lot in our skills this past week, just getting that shot off,” Moloughney said. “Marchand had a great, great pass, and I was just able to get it up. I saw (Pasiechnyk) wasn’t over in time so I was able to get it up.”

Syracuse’s Victoria Klimek was called for hooking just 1:42 into the third period.

Nicole Gosling took advantage during the power play with a shot from deep in the circle that got past Orange goalie Arielle DeSmet to tie the game 1-1 at 2:12 of the third.

Haley Winn and Caitrin Longergan assisted on the tying goal.

“(Brooke McQuigge) made a great screen and I saw the goalie left one side open so I just put it in,” Gosling said. “It was a great screen by Brooke. Both goalies were really good. It was a low-scoring game both games. You just have to find the little spots that you can hit.”

The three-on-three overtime period turned out to be the only one in which Syracuse outshot Clarkson (4-3).

Neither team scored and each had one shot hit the post. Clarkson’s post shot came from Brooke McQuigge with 1:40 left.

The Golden Knights (3-0-1) received a scare at 11:04 of the third period when Longergan, Clarkson’s captain and a Patty Kazmaier top 10 finalist last year, collided with Syracuse’s Jessica DiGirolamo near the Golden Knights bench.

Lonergan was down on the ice for several minutes and walked down the tunnel with a trainer briefly. She returned in time for her next shift and remained in the game.

Two years ago Lonergan suffered a season-ending shoulder injury against the Orange.

“It looked like she was kind of holding her shoulder a little bit,” Clarkson coach Matt Desrosiers said of his initial reaction to the hit. “It definitely didn’t look as bad as the other one. Caitrin is just that really competitive kid. Those types of players, they just want to be out there playing. They are the ones fighting through injuries and little nagging things to get out on the ice.”