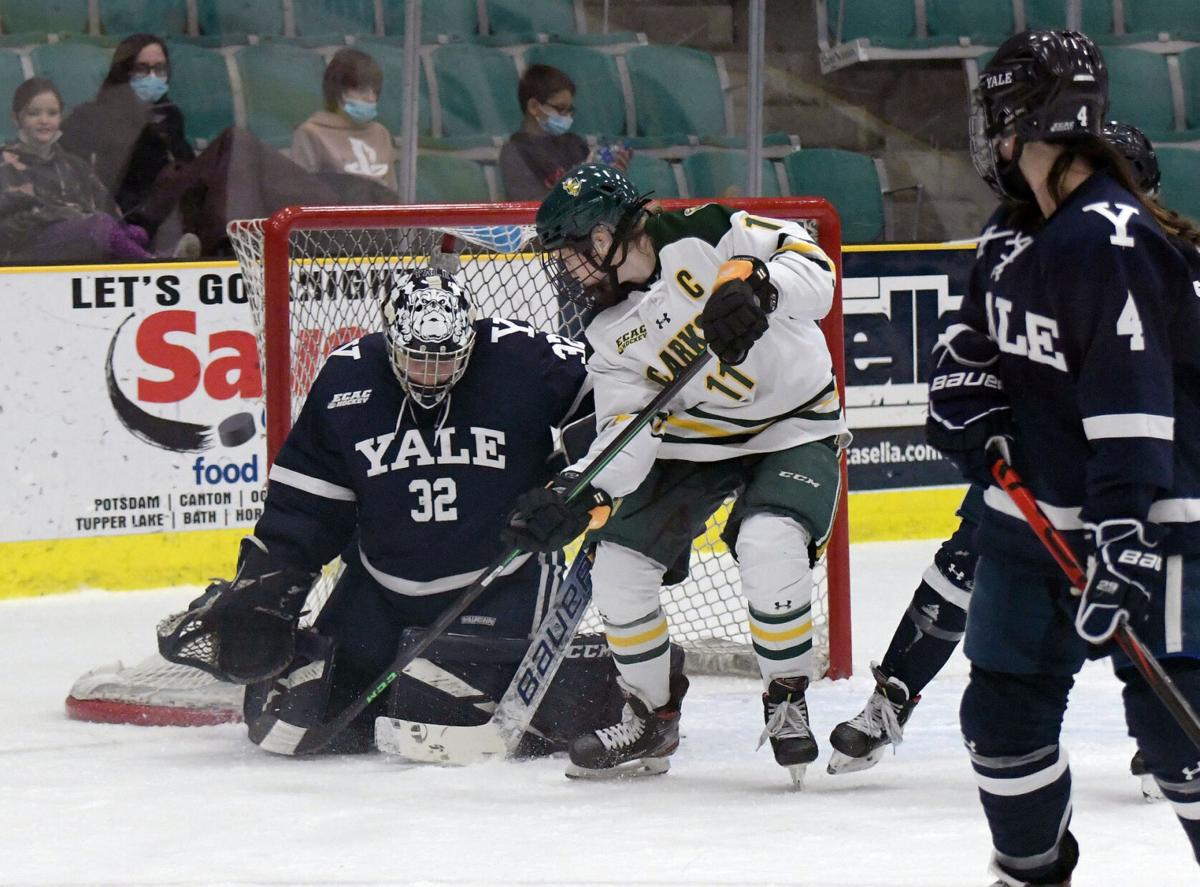 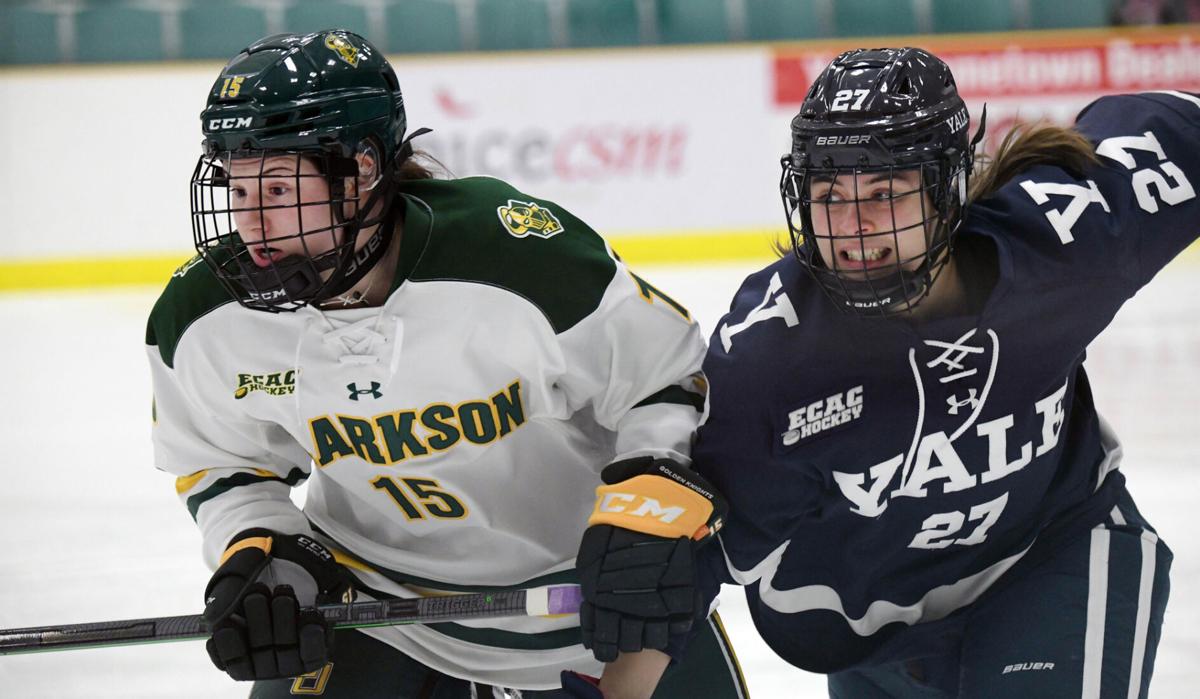 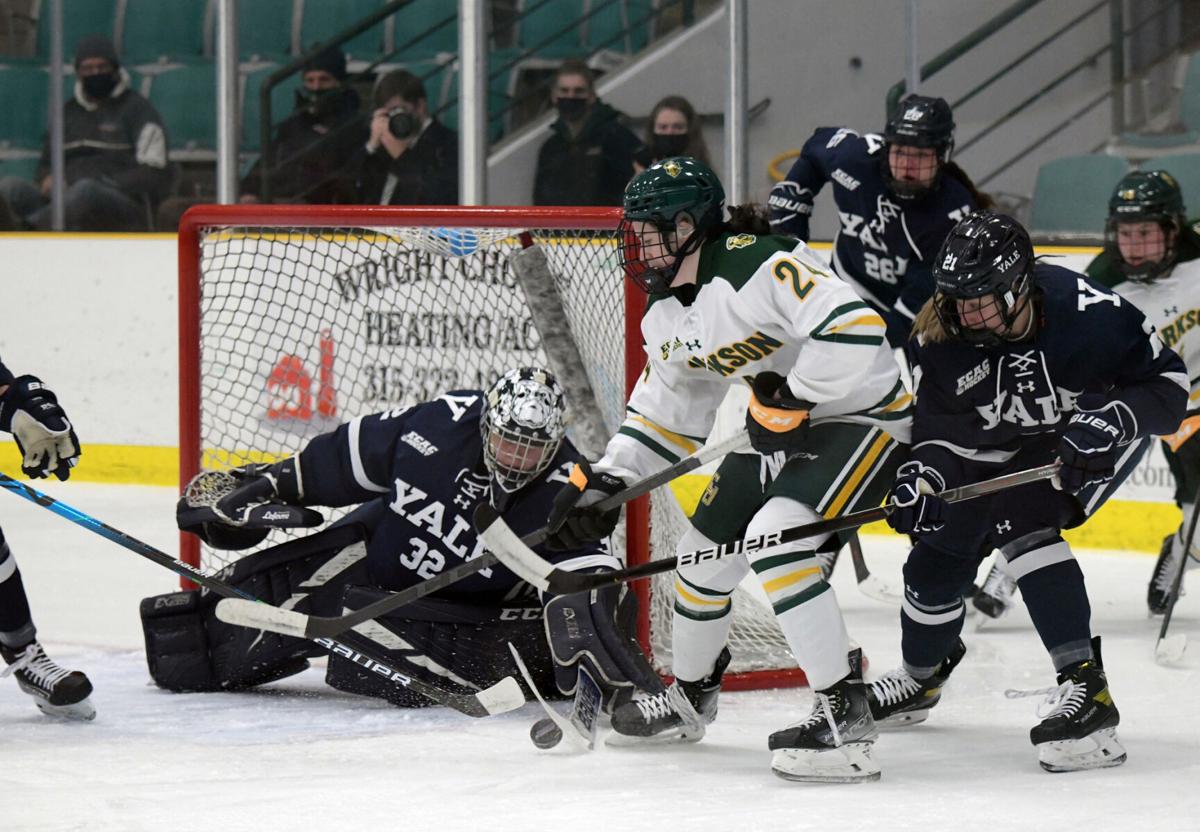 Clarkson’s Anne Cherkowski tries to get her stick on the puck before Yale’s Gianna Miloni makes the saved during Saturday’s game at Cheel Arena. Clarkson University photo 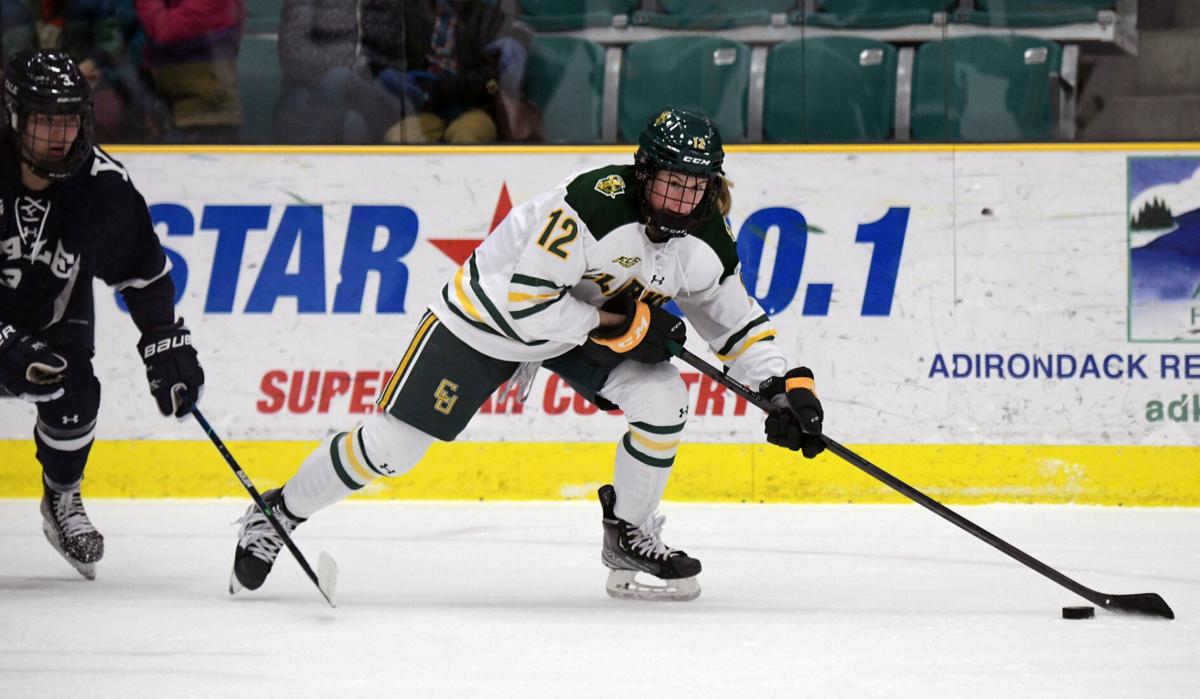 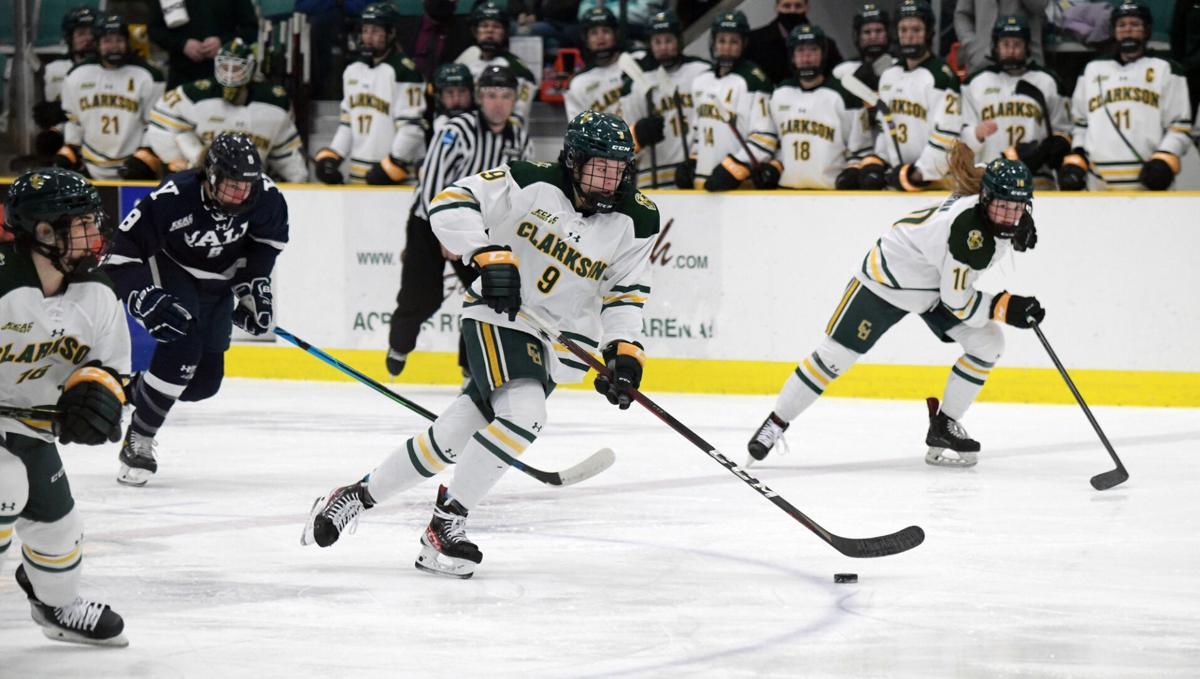 Clarkson’s Olivia Henson skates up ice with the puck during Saturday’s game against Yale at Cheel Arena. Clarkson University photo 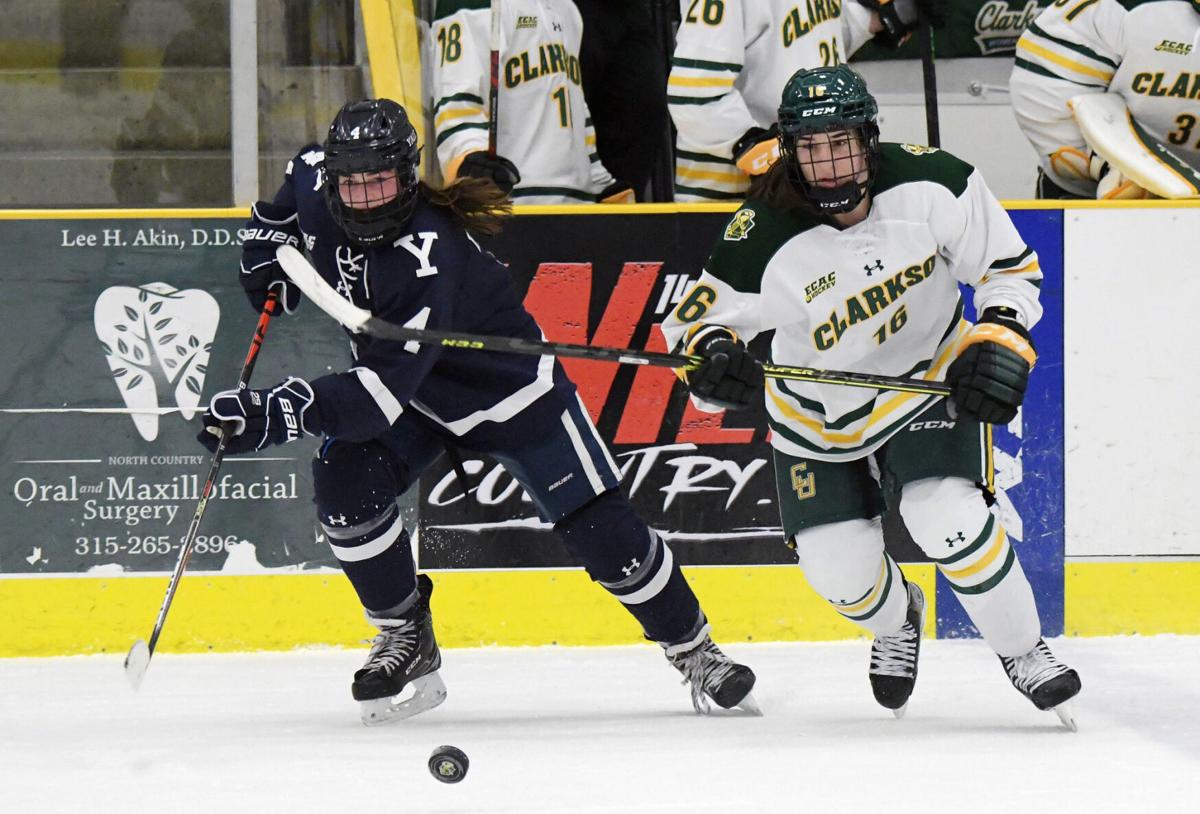 Clarkson’s Anne Cherkowski tries to get her stick on the puck before Yale’s Gianna Miloni makes the saved during Saturday’s game at Cheel Arena. Clarkson University photo

Clarkson’s Olivia Henson skates up ice with the puck during Saturday’s game against Yale at Cheel Arena. Clarkson University photo

POTSDAM — Yale’s women’s hockey team showed Saturday afternoon that it will be a serious contender in ECAC Hockey as well as nationally.

The Bulldogs recovered from an off game Friday to beat the Clarkson Golden Knights 4-2 at Cheel Arena.

Yale (7-2-1 overall, 5-2-1 conference) settled for a 4-4 tie Friday night at Appleton Arena against SLU as standout goalie Gianna Meloni gave up three goals on five shots in the first period.

But Meloni, who entered the weekend with a .981 save percentage, was back to form Saturday, stopping 28 of 30 shots, including coming up big twice on two-on-one breakaways.

“They are a good team, very good, tough on their ice,” Yale coach Mark Bolding said of Clarkson. “They were dangerous. It was a fun game, but a tough one for sure.”

The first two-player advantage for Yale came at 10 minutes, 44 seconds, when Kristina Schuler was called for checking.

The Golden Knights played well as goalie Michelle Pasiechnyk made a save, Nicole Gosling broke up a pass and Stephanie Markowski blocked a shot.

“I thought we actually killed them pretty good,” Clarkson coach Matt Desrosiers said of the two-player advantages. “We were blocking some shots and getting the energy. They just took advantage of a couple chances that they had.”

Yale still was on the power play after the first five-on-three ended and scored on a shot from Claire Dalton with 24 seconds left.

“It was really tough,” Clarkson’s Brooke McQuigge said of the penalties. “It makes it easy on teams to capitalize and they move the puck well so it ended up in the back of the net.”

Yale scored 19 seconds in on a pass from Elle Hartje that set up Emma Seitz with an open net for a target.

“That was a beautiful pass, I just had to be sure I don’t mess up,” Seitz said. “I’ve gotten better at that since I’ve gotten older.”

Clarkson got to Meloni in the second period when Lonergan took a shot and McQuigge was at the net to score on the rebound at 7:07.

“She’s a pretty big girl and we were just hitting her with pucks all night, we weren’t getting her moving side-to-side, which is what we needed to do to score,” McQuigge said. “I think she just played well tonight and bounced back from yesterday.”

The Golden Knights twice went on two-on-one breakaways in the period but were frustrated by Meloni.

Yale regained a two-goal lead at 9:55 of the third period when Seitz skated around a Clarkson defender in the circle and scored to make it 3-1.

“That’s something I really work on,” Seitz said of her move. “That was a nice one. I do that a lot. It’s a nice one to finish off.”

The Bulldogs clinched the win with an empty-net goal from Anna Bargman at 18:10.

Clarkson scored at 18:27 on a shot from Markowski.

n NOTES: The loss was Clarkson’s first at home this season. The Golden Knights are 6-1-1 at Cheel Arena. ... Yale had no power plays in Friday’s game at SLU but enjoyed five Saturday. Clarkson went on the power play just once. ... Markowski and Haley Winn both blocked three shots Saturday to lead Clarkson. Lonergan was 15-9 on faceoffs.

Sophie Holden tied the game for the Saints at 12:27 of the opening period.

Ogdensburg native Rose Jenault played for the Bears and took a shot on goal in the first period.